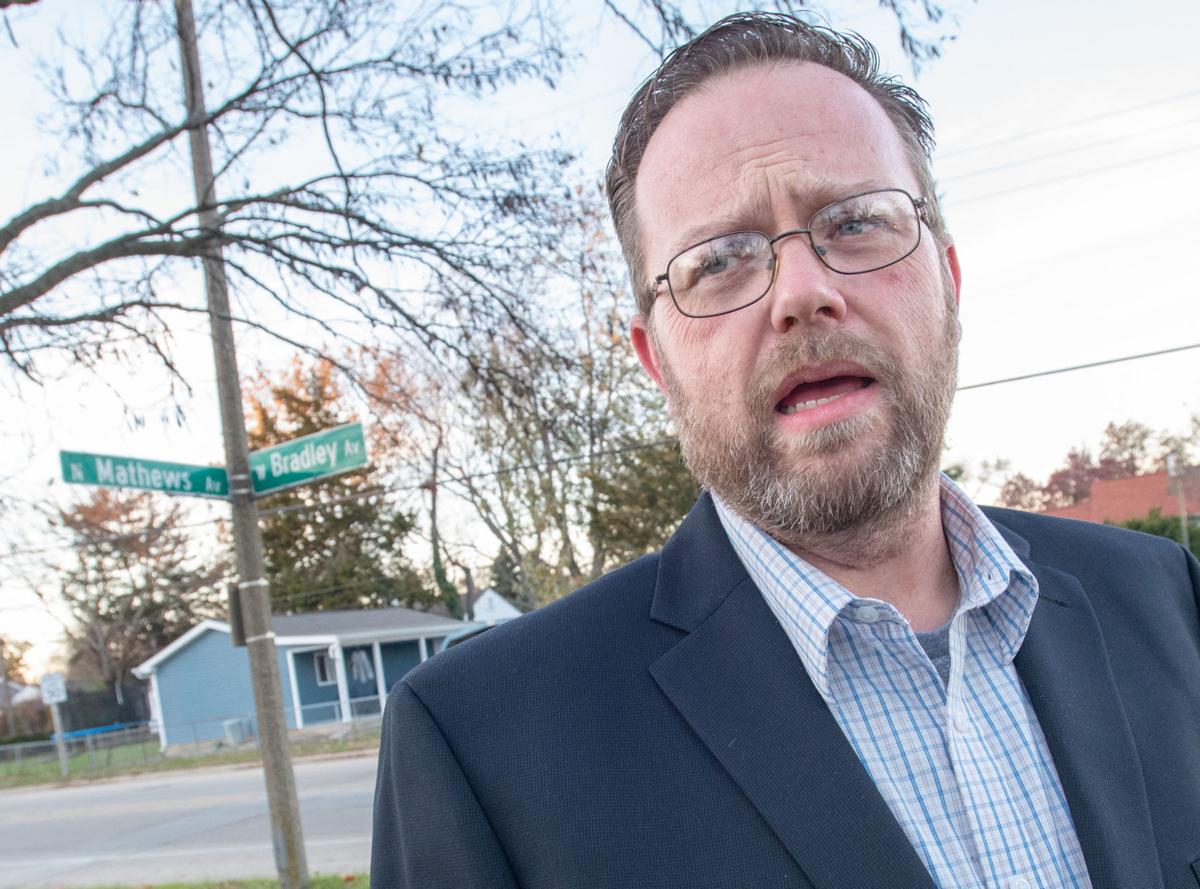 On Tuesday, Jonathan Blake returned to the intersection of Bradley and Mathews in Urbana, where he was shot a week earlier. 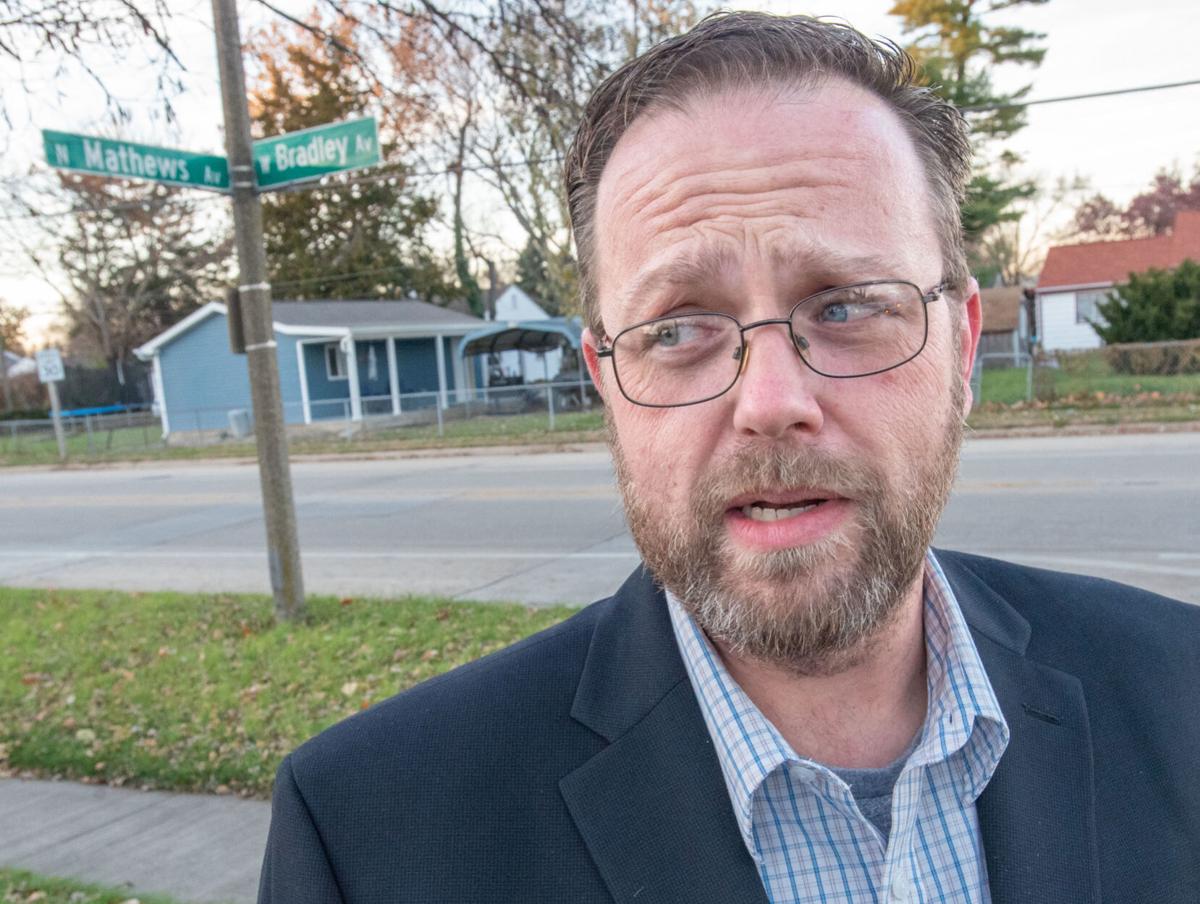 Jonathan Blake at the intersection of Bradley and Mathews in Urbana where he was shot last week. Tn Tuesday, Nov. 23, 2021.

On Tuesday, Jonathan Blake returned to the intersection of Bradley and Mathews in Urbana, where he was shot a week earlier.

Jonathan Blake at the intersection of Bradley and Mathews in Urbana where he was shot last week. Tn Tuesday, Nov. 23, 2021.

CHAMPAIGN — Jonathan Blake had pulled to the side of North Mathews Avenue on Nov. 18 to drop off his co-worker when bullets began punching through his car.

The first hurtled through his back seat. The second went through his driver’s door, grazing him on his left side, along the belt line.

The shooter’s car, described as a white sedan with a chrome emblem on the back, crept down Mathews as bullets kept ripping through Blake’s vehicle — hitting the fender, radiator, front driver’s-side tire and windshield twice, narrowly missing Blake and his co-worker.

The car “took off” down Mathews Avenue and turned left on Beardsley. Sixteen casings were found at the scene in Urbana’s 98th confirmed shooting incident this year.

By luck, perhaps the “grace of God and a guardian angel,” Blake said, a burn mark and softball-sized bruise where the bullet nicked him were all the pair had to show from the incident.

Blake’s attention turned to getting inside the house, in case the shooter decided to return. Then the pain kicked in.

“I had this extreme heat on my side. I knew I had been shot; just didn’t know the severity,” he said. “I was smart enough to know that when we see blood, nine times out of 10, we go into shock.”

When he went inside and an Urbana police officer rolled up to the scene, Blake began to shake and panic from the injury. The officer checked the wound.

A switch flipped in his brain.

“Oh, can I get up then?” Blake remembers saying. He stood up.

Another officer and paramedic arrived shortly after.

“You’ve got a pretty good spot, but thank God you’re still alive,” one of them said.

An ambulance ferried him to Carle Foundation Hospital’s emergency room. He didn’t know it yet, but about three hours earlier, a man was grazed by a bullet on the east side of Carle and received treatment for his injuries.

“‘A gunshot victim is walking into the ER,’ an ambulance driver told the hospital. That really put the light on the fact there’s so many people going to the ER that are not as lucky as I was,” Blake said.

While he received treatment, Blake answered questions for the police funneling in and out of the room, giving as many descriptions and bits of information that he could recall.

‘Why did this happen?’

The night started like any other, bowling with friends at a local league. They had a good time — his group is known as “the bad bowlers,” and they apparently live up to the title.

A female co-worker approached him asking for a ride. He said yes, no questions asked. On the drive to her home, they were delayed as a train streaked across the tracks at Bradley Avenue at 9 p.m., and the two chatted.

The crossing arms came up. A car was tailing him closely, and he turned left onto Mathews. That’s when the shooting began.

“I’m sitting there in the hospital and I realize, ‘Why did this happen?’ I was taking the young lady home, dropping her off. I travel down that road often from work. What is actually going on?” he said.

Blake was shot around 9:15 p.m. Thursday. Four days later, he was reading the opening paragraphs of his hypothetical obituary at an Urbana City Council meeting on Zoom.

“Last Thursday, I became a victim of the shootings in Urbana, and I am here today because I want to voice my opinion. I want to be seen. I want everyone that is going to listen to know that this cannot continue,” he said during his four minutes of remarks.

Blake emailed aldermen a number of photos: of his ruined car, now submitted for insurance. And of his bullet wound.

Two days prior, the city council had voted down the adoption of automated license-plate readers.

“I’m not going to take a stand that the license-plate readers is the solution, but it can definitely be a tool,” Blake said.

He was thinking of two other recent gun-violence victims: the 28-year-old man who was shot outside of Carle, and 24-year-old Liam Gasser, who was shot in the head in the middle of the day at a busy intersection on North Prospect Avenue.

‘I have never been a statistic’

He wants something to be done to combat community gun violence and hopes that sharing his identity will accelerate that process.

“My intention is I think it’s time that the victims come out to light, and if it starts with me, then maybe another one will follow,” Blake said. “Am I scared there’s going to be something retaliatory on me? Yeah. But I also know that if I don’t come out and say something, I become a statistic. And I have never been a statistic.”

Blake is many things. A son, and a father to two children. Born in Mattoon, he moved to Urbana two years ago. He managed the O’Charley’s restaurant; ever since it closed, he’s worked multiple jobs and made ends meet, he said.

He’s 44, openly gay and doesn’t subscribe to any particular religion. He’s convinced that Thursday night, a guardian angel was “wrapped around” him.

His physical wound is now fine — “nothing a Band-Aid and some Neosporin couldn’t take care of,” he said. He knows how lucky he is.

The long-term damage may be mental. He’s having trouble driving at night.

When Blake pulled up to a stoplight last week, the brake lights of impatient drivers flashing on and off reminded him of that night a week ago.

They triggered something close to a panic attack and forced him to go home, he said.

“The entire time when those shots were being fired, they had their brake lights on,” he said. “I’ve always been more of a rock than Play-Doh. After this event, I’d say I’ve gotten a little soft.”

What now? He’s intent on speaking up and trying to get other shooting victims to follow suit. Blake promises to attend future local government meetings and advocate for new security measures in the city.

“Let’s support the mayor and let’s support our city council, but let’s make sure we’re getting what we need done so we can be safe on our own streets,” he said.

Officers learned the victims were seated in a parked vehicle when the occupants of another vehicle drove by and shot at them.