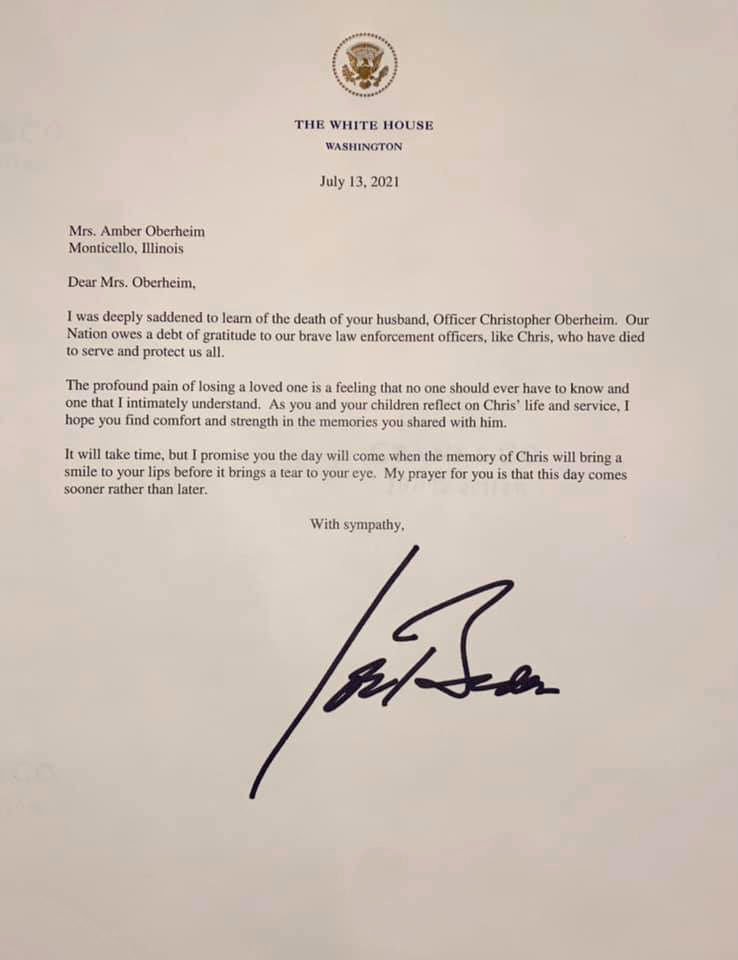 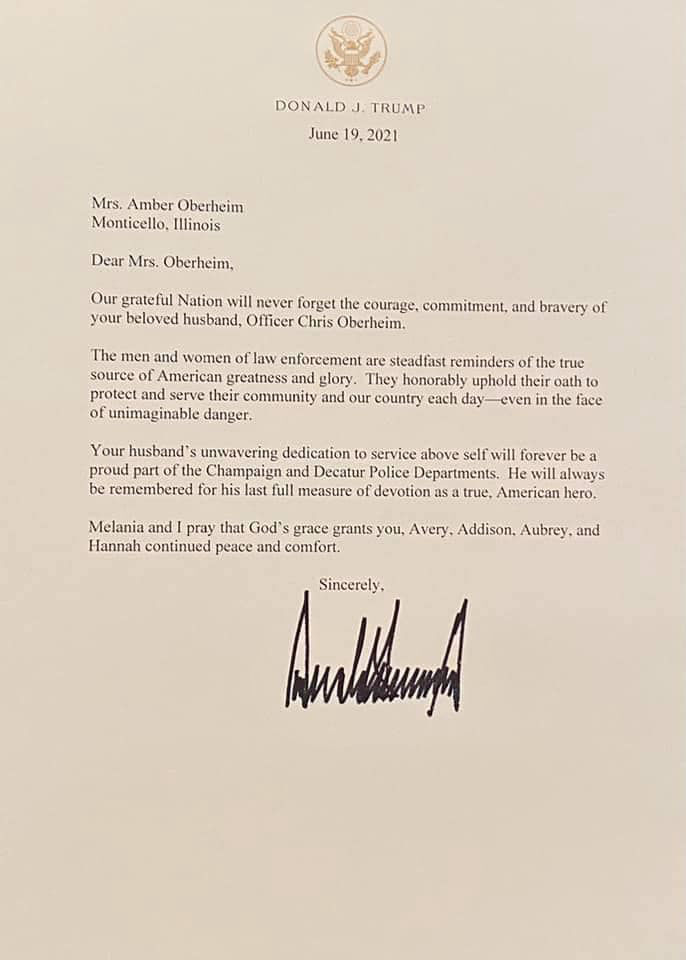 MONTICELLO — In the kitchen of her family’s Monticello home, 14- year-old Addison Oberheim opened up a manila envelope and froze.

The letter, addressed to her mother, Amber, was dated June 19, exactly one month after her husband, Chris Oberheim, had made the ultimate sacrifice.

“Your husband’s unwavering dedication to service above self will forever be a proud part of the Champaign and Decatur police departments,” the letter said. “He will always be remembered for his last full measure of devotion as a true, American hero.

“We all just kind of stood there for a minute, like ‘Wow. OK,’” Amber Oberheim said. “We didn’t initially know what to say or do.”

So she inspected it: the feel of the paper and envelope, the cardboard behind it, the seal and signature. It seemed legit.

Flash-forward three weeks later, and Amber Oberheim clicked on a FaceTime call from her daughters. They were holding another letter with the same dimensions, manila envelope and cardboard piece in the back.

This time, it was from the White House.

“It will take time, but I promise you the day will come when the memory of Chris will bring a smile to your lips before it brings a tear to your eye.

“That to me is one of the highest honors that a person who loves our country can receive,” Amber Oberheim said. “I’m very honored and humbled that someone in that level of service to our country would recognize Chris’ heroism and the sacrifice that he made, and that all of his family and fellow officers have made.”

She plans to display the letters with “museum quality” framing at some point. No one is allowed to touch them.

It’s been a packed couple of months for Amber Oberheim who has been busy recognizing her husband and hosting events to honor the fallen Champaign officer’s memory. Next on the list:

What will she be feeling that day? It’s hard to predict, she said, because sometimes, in the moments you expect to struggle, your emotions stay in check.

“Emotionally, going into that day, I have more than anything a sense of pride for Chris and what he did,” she said. “He was never a boastful man, he would have a hard time accepting that in his memory, but I think he would think it’s a very honorable thing to do.”

After the initial GoFundMe campaign for Officer Oberheim’s memorial raised more than $260,000, his widow seized on the momentum, founding Peacemaker Project 703.

“Our mission is to proactively support law-enforcement officers through community outreach, reform and education,” Amber Oberheim said. “Our vision is to promote our nation’s positive regard and respect for law enforcement.”

This business is still all very new for her. The articles of incorporation are approved, but the organization is still going through the lengthy legal process of being recognized as a 501(c)(3) nonprofit — charitable and tax-exempt.

“We have a lot of ideas that are organic to us, it doesn’t necessarily mean they’re the right ideas,” she said. “Through all of this, we do a lot of praying that God will put the people and organizations in our lives and in front of us that he’d like us to help.”

Organizing everything, she said, is “more than a full-time job,” but she welcomes the responsibility.

“It can feel overwhelming at various different points in the day, but the extremely resourceful and awesome people that surround me are dedicating and donating their time and talent to assist me in this process,” she said.

In the meantime, Amber Oberheim and her daughters cherish the time they spend with other police families, like when they shed new light into stories of Chris’ time in uniform.

“Telling us stories, he’d usually downplay the role he had,” his wife said. “When we hear the story from other officers that were present, it sounds different. Chris would never take as much credit for his role in whatever it was that they were doing.”

What’s especially touching, she said, is hearing from other families whose officer died in the line of duty.

“We belong to a club that nobody even knew existed or even really cared to be a part of,” she said. “Just by the nature of our experience, we have a bond where we can share a lot of things. I value those friendships greatly.”

'Honoring his memory is a work in progress that has no end date, which is why we’re here this evening.'

Music, beer and love for law enforcement in Farmer City

“It’s just a crazy world where the good guys are bad guys and the bad guys are good guys. I pray for law enforcement every day,” said retired police officer Tim Voges.