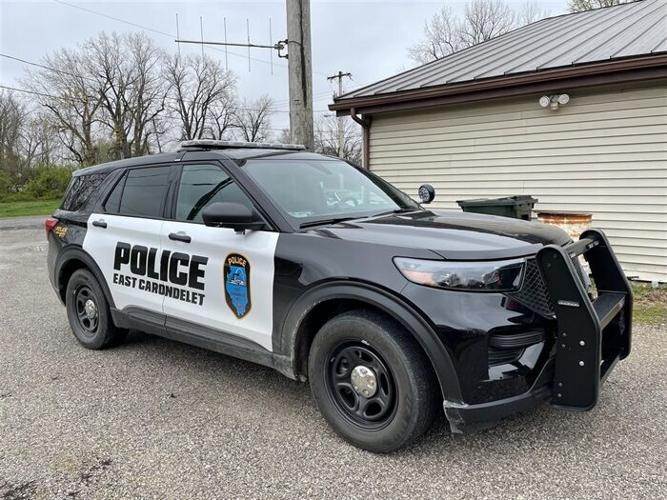 An East Carondelet police car is pictured earlier this week. 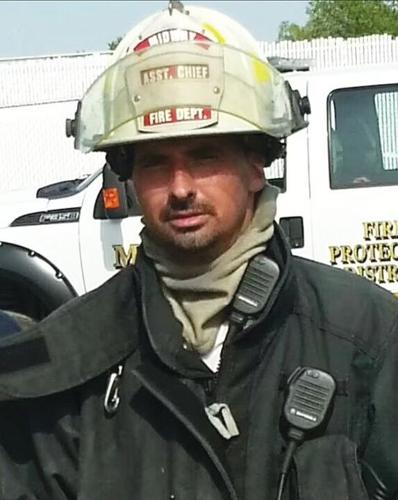 EAST CARONDELET — Jerame Simmons spent nearly 24 years as a convicted felon after pleading guilty to arson in 1999 until a 2021 pardon cleared that record and allowed him to head the department that put out the fire he started.

Now, he’s not only a fire chief, but also a part-time police officer, allowed to make arrests, carry a gun and use lethal force if warranted.

A plea deal allowed Simmons to avoid prison time 24 years ago, but the prohibitions that come with a felony conviction would stand in the way of a public-safety career and gun ownership. That all changed with a May pardon from Gov. J.B. Pritzker, which followed a string of other favorable decisions from police, prosecutors and judges that allowed Simmons to avoid prosecution or conviction in other cases.

After that pardon, Simmons became the fire chief for the Prairie Du Pont Fire Department, located in St. Clair County, where he previously served as a volunteer firefighter when he pleaded guilty to setting fire to an abandoned home as an 18-year-old. His hire prompted a mass resignation by firefighters from the department.

Last month, he also became a part-time police officer in his small hometown of East Carondelet, just across the river from St. Louis. Simmons did not return calls for comment.

According to the Illinois Law Enforcement Training and Standards Board, Simmons joined the force on March 14 and completed his firearms training on March 23. Although the pardon did not restore Simmons’ firearm privileges, a federal law exempts police officers from having to obtain a Firearm Owners Identification Card or concealed carry license.

Background checks are largely up to the counties and municipalities doing the hiring and are usually required by most local police departments.

Herb Simmons did not return a call for comment.

The chargesIt was after school on Jan. 15, 1998. Toilet paper and ceiling tiles were piled in a heap in the basement of Dupo High School and set on fire, causing minor damage. Nine days after that fire, St. Clair County sheriff’s deputies received a report that a white van had turned on emergency lights and stopped a vehicle.

The men in the stopped vehicle told police the van’s driver approached them and asked if they had alcohol then displayed a badge and told them he was a U.S. marshal. Deputies later found Simmons behind the wheel of a white Chevrolet Astro Van, registered to his father, Herb Simmons, who served as a deputy U.S. Marshal.

Less than a month later, on Feb 13, 1998, a vacant house was set on fire. Police stopped Simmons and questioned him after a neighbor identified a white van leaving the area after the fire started. Simmons was driving a white van — and responding to the fire call in his capacity as a volunteer firefighter — when he pulled up at the Prairie Du Pont Fire Department.

The Illinois Fire Marshal’s report from 1998 stated a five-gallon gas can was found on the home’s first floor, flares were found in three different locations, and evidence of accelerant was found on the stairs of the home.

Gloves and a coat taken from Simmons had the odor of gas, and Simmons’ cousin told police Simmons started the fire. The house had been set on fire three times before. Simmons eventually confessed to a St. Clair County detective, but Simmons said the officer “acted like a jerk” and lied to him to leverage the confession.

In the case at the high school, Simmons was charged with a Class X felony — the most serious felony — because he knew that there was a woman in the building when the fire was set, according to court records.

In a plea agreement, the school fire charge was dismissed and Simmons pleaded guilty to the arson charge related to the vacant home. Under the terms of the deal, he received four years of probation for arson at the vacant home and another 30 months of probation for the unlawful use of an emergency light. Those charges were expunged after the pardon was signed by Pritzker on May 19, 2021.

The fightThree years before that pardon, Jerame Simmons told a strip club bouncer he was a cop, according to a police report.

The bouncer at the Sauget club ejected Simmons’ wife, who had an altercation with another patron, the report stated. The report stated the bouncer said Simmons accosted him, told him he was a police officer, then pulled a gun. Simmons later denied he pulled a firearm, stating he shook his fist at the bouncer while holding a vape cigarette. Police took the word of the club manager, who said Simmons was not holding a gun.

Simmons was not a police officer at the time. He was charged with disorderly conduct and sentenced to 90 days probation.

These charges cannot be seen on Simmons’ public record, but were listed in the petition for clemency and in previous news coverage about the fight at the strip club.Public safety record

Simmons was interested in law enforcement early on, according to his clemency petition.

He joined the Boy Scout Explorers at the East Carondelet Police Department when he was still in high school.

He trained with a K-9 Officer, searched for missing kids and started a Boy Scout Police Explorer program. He received first responder, firefighter and police safety commissions, as well as University of Illinois and Federal Emergency Management Association certificates.

He served as director of the Public Safety Department of Emergency Services for East Carondelet in 2005. He volunteered with the Golden Garden, Valmeyer and Prairie DuPont fire departments. He was acting fire chief for the Brooklyn Fire Protection District.

In May, he asked the governor for another chance — a clean slate to pursue a career in public safety.

“I know that kids do stupid things, but being in the wrong place at the wrong time is all it takes. I am a perfect example,” Simmons wrote in his petition. “I have lived this nightmare for a long time and I am asking for your forgiveness.”