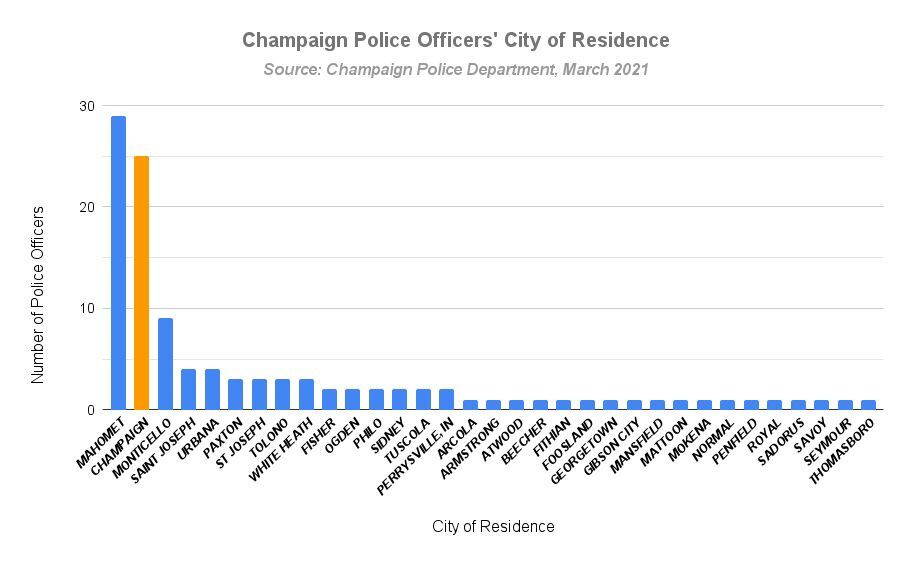 A look at where Champaign police officers call home. 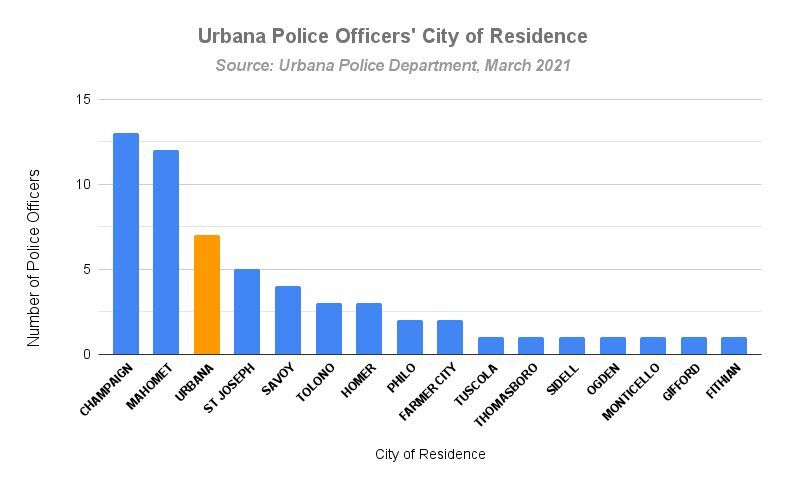 A look at where Urbana police officers call home.

A look at where Champaign police officers call home.

A look at where Urbana police officers call home.

The vast majority of officers in the Champaign and Urbana police departments don’t live in the communities they serve.

The data on residency was provided to CU- CitizenAccess in response to a Freedom of Information request. Champaign has a total of 113 officers and Urbana has 58.

A national study found that about 60 percent of police officers in major cities live outside the cities they patrol. Locally, those figures are 78 percent for Champaign and 88 percent for Urbana.

A few Champaign police employees live more than an hour away from the city they serve. Two officers live in Perrysville, Ind., which is about 50 miles away, and a third lives in Mokena, a southwest suburb of Chicago that is almost a two-hour drive from Champaign.

Tamara Cummings, general counsel for the Fraternal Order of Police, the union that represents officers in both Champaign and Urbana, said there are pros and cons to residency requirements, which she said varies depending on the jurisdiction.

“For example, having officers live in the community where they work increases the likelihood that the officers will have an understanding of and familiarity with members of the community they serve,” Cummings said via email. “On the other hand, I have heard very frightening stories about officers who live where they work running into persons they have arrested and they and their families were threatened.”

“I want to get the most, the best people, and whether they live in Urbana, Champaign or wherever else, we want to make sure that we’re getting the best qualified,” Seraphin said.

He added that fewer people are applying to take the test to join the department.

“I will say that 27 years ago, when I took the test, there were 300 people taking the test. (Now) we have 30,” Seraphin said. “So we have to try to get the best candidates, wherever they might be from.”

A total of 29 Champaign officers reside in Mahomet, while only 25 live in Champaign. Twelve Urbana officers live in Mahomet compared with seven in Urbana.

Urbana’s police department currently does not offer any residency bonuses. Elizabeth Borman, the city’s human-resources manager, said it isn’t planning to offer one at this time.

Tracy Parsons, community relations manager for the city of Champaign, said he doesn’t believe residency is the most important issue in policing, but officers need to know the community better.

Residency programs for police officers in Illinois have seen some success in improving community relations. Rockford’s Resident Officer Community Keeper program, or ROCK, embeds select officers in the communities they patrol. Officials there said that builds trust and gives officers a personal stake in the neighborhood.

As concerns over police reform continue to be debated nationally, residency is only one part of the puzzle. Rockford ROCK Officer Patrice Turner said in a 2020 interview that “mending community relationships won’t come until the fractures of the past are dealt with,” and people will see you as just a police officer without forming stronger bonds on duty.

Nationally, police residency is still being researched alongside other data-driven efforts to re- examine policing.

Last year, Communities United Against Police Brutality, a volunteer organization based in Minneapolis, told USA Today it hasn’t encountered any evidence of residency requirements having positive effects on the quality of policing.

In the article, one member said residency requirements would be a “distraction from real reform,” such as ending no-knock warrants and other scrutinized practices.