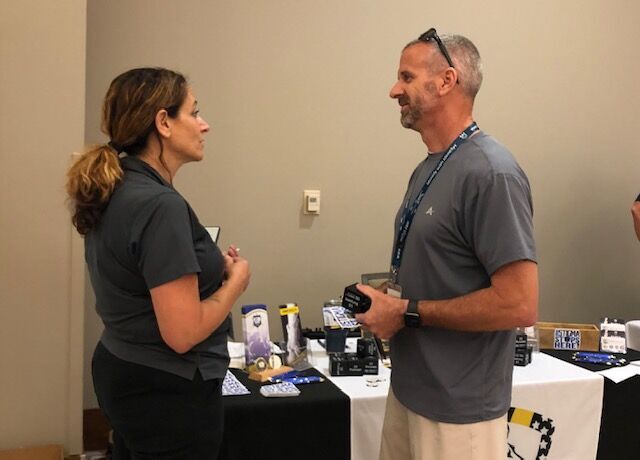 Rantoul Deputy Police Chief Rodney Sullivan speaks with Christy Lister of Blue H.E.L.P., an organization dedicated to advocating for survivors of police officers who committed suicide and to bring awareness to the need for mental-health counseling. 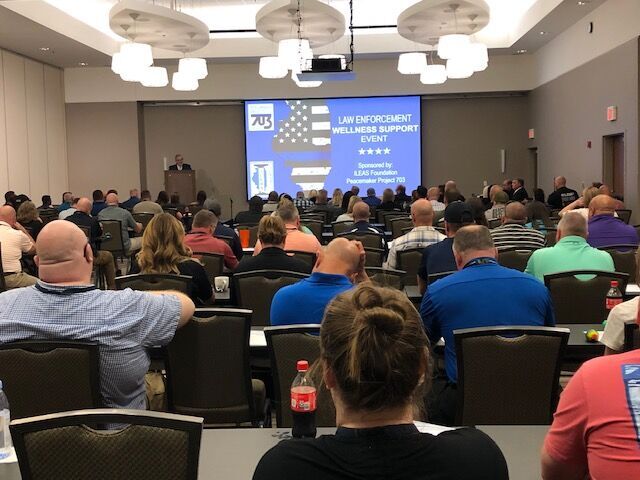 About 115 police representatives from all over Illinois showed up at the I Hotel Conference Center Tuesday to hear from vendors who supply police wellness services. The event was paid for by the ILEAS Foundation and Peacemaker Project 708. 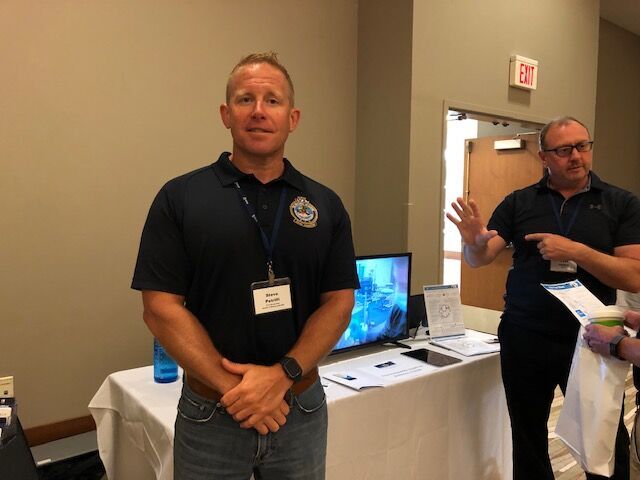 Normal Police Chief Steve Petrilli is a sought-after speaker on police wellness who focuses on nutrition, exercise, sleep and stress management. He was among police wellness vendors at a Tuesday event in Champaign.

Rantoul Deputy Police Chief Rodney Sullivan speaks with Christy Lister of Blue H.E.L.P., an organization dedicated to advocating for survivors of police officers who committed suicide and to bring awareness to the need for mental-health counseling.

About 115 police representatives from all over Illinois showed up at the I Hotel Conference Center Tuesday to hear from vendors who supply police wellness services. The event was paid for by the ILEAS Foundation and Peacemaker Project 708.

Normal Police Chief Steve Petrilli is a sought-after speaker on police wellness who focuses on nutrition, exercise, sleep and stress management. He was among police wellness vendors at a Tuesday event in Champaign.

CHAMPAIGN — Mark McCallister and Cory Christensen knew seeing a fellow law-enforcement officer they knew dead on the ground in uniform was affecting them.

What the Champaign County sheriff’s deputies didn’t know was what to do with the unidentified emotions they experienced after being such an intimate part of the tragedy that befell Champaign police Officer Chris Oberheim and his family in May 2021.

Officer Oberheim was fatally shot outside a north Champaign apartment complex as he responded to a domestic dispute. His partner, also shot, returned fire and killed the man who killed Oberheim.

The first officers who converged on that scene were veterans who had handled plenty of domestic disputes.

“I was distancing myself from my family, which wasn’t good,” said McCallister, a sergeant.

“I wasn’t bringing it up with my wife because I didn’t want her to worry,” said Christensen.

Both men grew up in law-enforcement families where previous generations did not have the resources or the encouragement to get help dealing with the overwhelming negativity that goes with their careers.

But they knew to reach out for professional help and are glad they did.

The pair were among about 115 law-enforcement officers who showed up Tuesday at a Law Enforcement Wellness Support Event, co-sponsored by the Illinois Law Enforcement Alarm System Foundation and Peacemaker Project 703, a nonprofit organization formed by Officer Oberheim’s widow, Amber, to honor her husband and promote respect for law enforcement and their families.

“This is one area we need to support you better with,” Amber Oberheim told the police representatives from all over Illinois who came to collect information about mental-health services and products available to their departments.

“We know you are stoic, tough. You show up. You do your jobs,” she said. “But at the end of the day, you are human, and humans are not robots, and you have feelings.”

Eleven providers showed up at the I Hotel for the daylong event to interact with the police representatives about what is out there to help them keep mentally healthy.

The groups represented a cross-section of organizations and services — psychological testing and counseling, training and providing service dogs, anti-suicide support, and even a diagnostic tool for individualized metabolic health.

Mahomet police Chief Mike Metzler, in law enforcement for 43 years, was seeing what was available to meet legislative mandates for officer-wellness training.

“One of the things we’ve seen a lot over my career is the need for awareness of officers’ mental health and how the things we see have a significant impact over time,” he said.

“We learn and change tactics, whether it’s how SWAT or patrol operates or how we take care of one another,” said the former Urbana police lieutenant and University of Illinois Police Training Institute instructor who’s been Mahomet’s police chief since 2011.

On May 7, 2016, one of his officers was shot in the arm by a man who fled Mahomet and holed up in a remote area of southern Illinois, where he was killed a week later in an encounter with Illinois State Police.

“I made a lot of mistakes,” Metzler said of the mental-health component of that incident. “I would have liked to have been more focused on taking care of the officers who were directly involved. Since then, it’s become a focus of mine and others. This event, putting providers with departments, is valuable.”

Normal police Chief Steve Petrilli, a brother to Champaign Deputy Police Chief Tom Petrilli, runs a side business called “First Responder Health & Wellness.” Teaching since 2017, Steve Petrilli has become a go-to lecturer around the country on ways to give officers “usable information to improve their health.”

“I talk about the four pillars: the importance of nutrition, exercise, sleep and stress management,” he said, adding that when he became Normal’s police chief a few months ago, he made officer wellness the department’s No. 1 core value.

“We’ve taught wellness to recruits since 2004,” said Schlosser, who has served as director since 2012.

“This is a burgeoning industry. There are a lot of providers coming out of the woodwork now,” he said, stressing that confidentiality is a paramount concern of officers in training and veterans alike. “We are still trying to get rid of the stigma of seeking help. It’s better, but it still exists.”

McCallister and Christensen said they felt fully supported by their bosses and colleagues when they got help after Officer Oberheim’s killing.

McCallister said he had “no clue” what he was feeling but said it just sort of “overtakes you.”

“I just know I wasn’t myself for a while. My wife really noticed and convinced me to go” for counseling, he said.

McCallister said his counselors explained to him why he was feeling the way he did and gave him tricks to divert his attention from dwelling on it.

“He had me walk through what I saw and felt. It was hard to talk about,” he said. “But once you let it out, you feel a lot better about it.

“It’s probably never going to go away,” he said of his memory of that tragedy, adding it’s triggered every time he drives in north Champaign near where it happened.