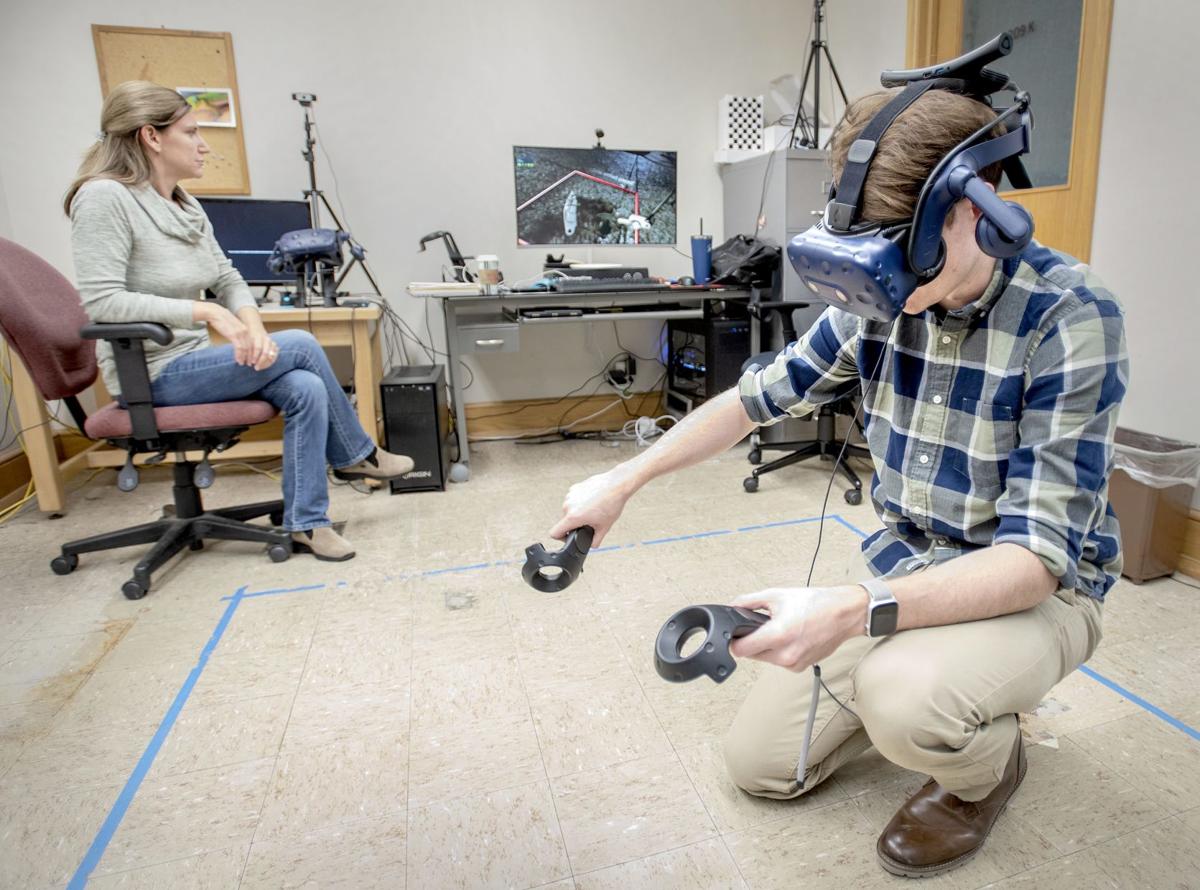 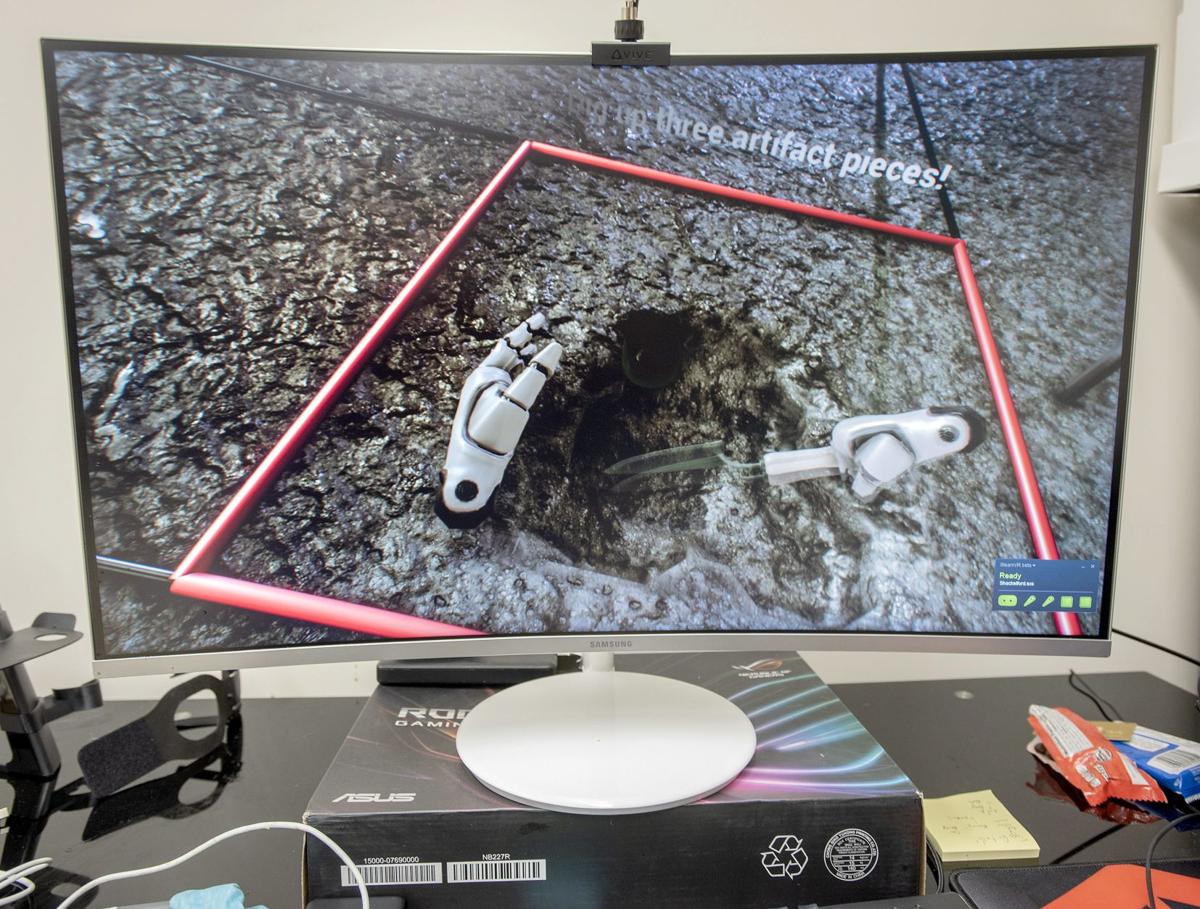 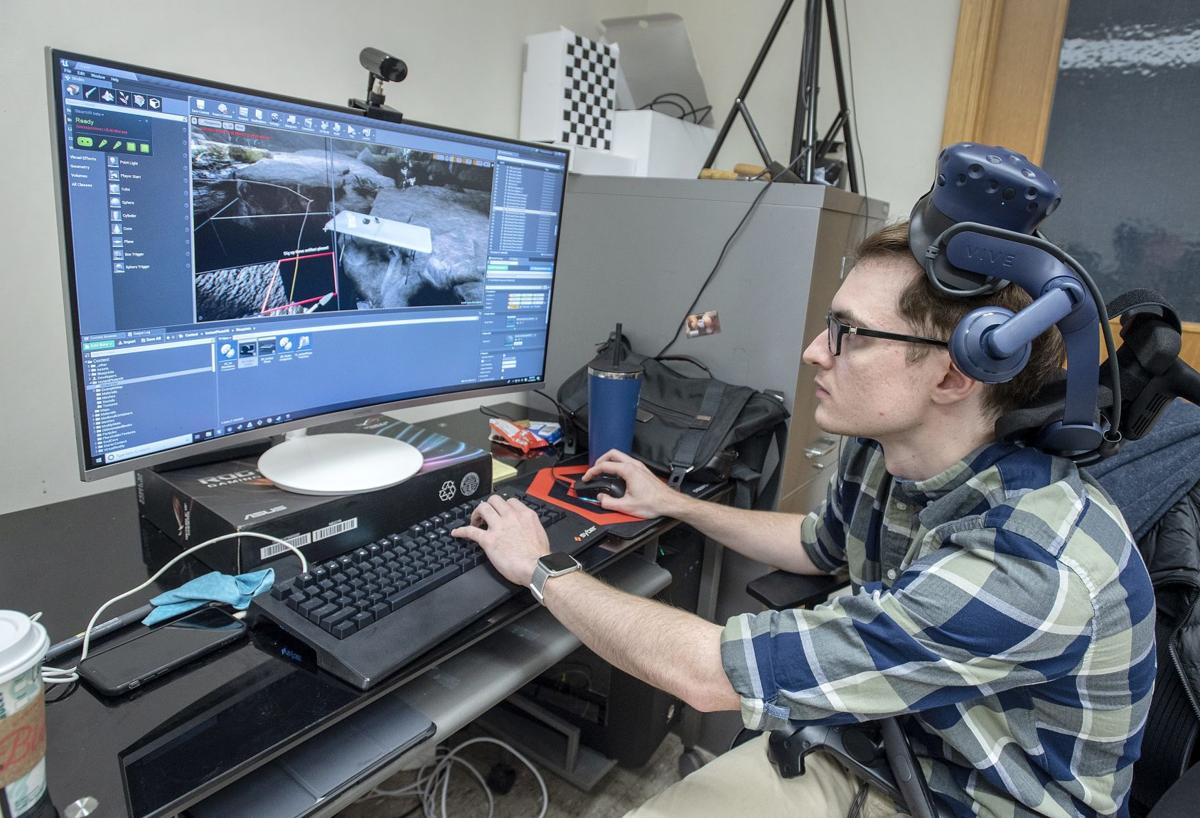 URBANA — You know what takes a village? Creating a cave that's immense and full of pottery shards, bones and bottles.

Well, a virtual one, at least.

The idea is for budding archeologists at the University of Illinois to pick up and examine objects in a safe, simulated world.

That village is what multidisciplinary work is all about.

"I became fascinated with how people move," she said.

At Virtual Archaeology, the new virtual-reality lab in Davenport Hall, she can indulge her childhood love of caves.

"There are a lot of caves where I come from," she said.

On this Friday, she's joined by computer-science doctoral student Cameron Merrill, who controls the computer system and its high-end graphics abilities.

He has your typical "Big Bang Theory" genius pedigree: playing video games, including "World of Warcraft," as a child, and building on that experience to learn to code at the age of 10.

Merrill has become the group's leader in the tech of headgear and controllers affectionately known as "Skeletors."

There are other aspects to the archeology line of exploration.

Shackelford's 24 students are immersed in the virtual-reality experience, modeled closely on Mammoth Cave in Kentucky.

She's a cave fan from her time on the East Coast.

Mammoth Cave, the longest known cave system in the world, has had many lives over the centuries, she noted, serving as anything from living space to storage to even a tuberculosis ward.

(The damp, chilly air, she added, is exactly what you don't want if you're trying to mend those with what was then called "consumption.")

Bones from long before the time of Columbus have been found. So have bottles that can be dated to within two or three years, Shackelford added.

While there's a giant virtual world for the students ("mammoth" is an accurate term), the room in the antrhopology offices that houses it can generously be described as nondescript.

"When students put on the virtual-reality equipment, they think the cave is 10 or 20 times bigger than the room is," Shackelford said.

Once students don what Shackelford calls their "thinking caps," they're immersed in a space that they can manipulate to find artifacts.

It's stunning, with an eerie light coming from above, water dripping everywhere and gorgeous waterfalls.

Using the "Skeletor" hands, it's easy for the students to use tools to dig out bottles, shards and bones, revealing different eras when peoples of the past had different uses for the cave.

(Easy, except for this report, who put the gloves on the wrong hands and even managed to drop the immense book that newbies are told to take a glance at. A trowel is a real challenge.)

Archeology was once a casual affair, with treasure hunters attacking a site with shovels, not keeping records or caring that they were destroying objects that weren't of value to them — bricks and other things that they saw as just in the way of getting to the gold.

Modern archeologists can learn much from those seemingly unimportant objects.

Funded by a two-year, $500,000 grant from the National Science Foundation, Virtual Archaeology offers a big bang for the bucks.

Going to work on a real excavation, including travel, can exclude low-income students and students with limited mobility.

"It's very expensive for students to go to field school," Shackelford said, adding it can run from $500 to much higher.

"Virtual reality makes this possible for many students," she added.