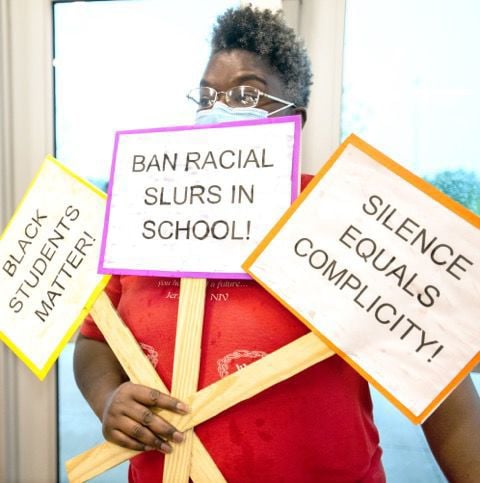 LaShanda Glover of Mahomet lets her feelings be known before the Mahomet-Seymour school board meeting Monday at Middletown Prairie Elementary School. Only 10 people were allowed in the room at one time, so the demonstrators had to enter one at a time and leave after making their comments. 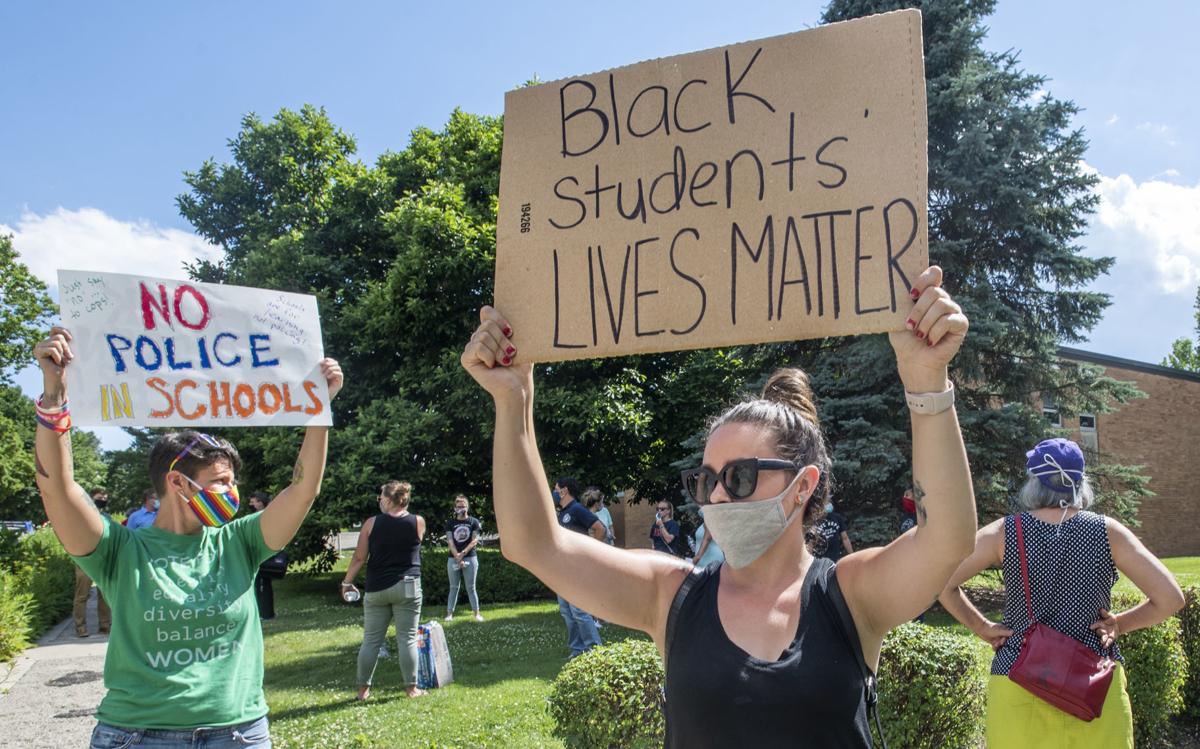 Champaign school district parent Martha Mills, left, and teacher Jamie Pomahac hold signs Wednesday at the corner of Green and New streets before a school board meeting where members discussed and passed a resolution declaring that racism is a public-health crisis that negatively impacts students, school staff, families and the community.

LaShanda Glover of Mahomet lets her feelings be known before the Mahomet-Seymour school board meeting Monday at Middletown Prairie Elementary School. Only 10 people were allowed in the room at one time, so the demonstrators had to enter one at a time and leave after making their comments.

Champaign school district parent Martha Mills, left, and teacher Jamie Pomahac hold signs Wednesday at the corner of Green and New streets before a school board meeting where members discussed and passed a resolution declaring that racism is a public-health crisis that negatively impacts students, school staff, families and the community.

CHAMPAIGN — Near the end of a four-hour virtual Champaign school board meeting Wednesday, the mood became emotional.

The seven board members smiled and clapped as they looked into their webcams and passed a resolution that put forth a framework for how the district will deal with systemic racism.

“We’re going to screw up sometimes, but the only way we won’t mess up is … if we don’t try anything,” Elizabeth Sotiropoulos said. “We’ve got to try and try and try.”

The resolution was broad in scope, as were the three hours of public comments that came before its passage. It addressed curriculum, school resource officers, expanded professional development centered around race and the recruitment of black teachers.

It wasn’t a final solution, nor did it lay out a detailed plan. It was simply the start of a long process.

During a time when widespread protests across the nation are causing a reckoning with regards to racial disparities, districts across the area are grappling with how to make their schools more inclusive. For Minnie Pearson, the president of the NAACP of Champaign County, these conversations are long past due.

“It’s not just because George Floyd was murdered in Minnesota,” said Pearson, a retired Unit 4 first- and second-grade teacher. “It’s been 400 years of this. But now that there’s videos of it, White people are seeing what they’ve accused Black people of whining about all these years. It’s racism. It’s implicit biases, and they’re bringing that to the schools, to the classroom.”

“We are a vast, majority-White district, but that does not in any way release us from the obligation and responsibility to talk about racism and examine our own behaviors, actions, biases,” Superintendent Lindsey Hall said. “What has been happening in our country over the last month raises the specter of racism to a level that does not release anybody to the obligation of discussing it and taking a long, hard view of what we do and how we think.”

For Mahomet-Seymour, that means not only addressing inclusion of its minority students, who make up 12.8 percent of its student population, but also changing the perspective of its White students.

The district was planning professional development that addressed diversity and racial bias, directed by two professors from the University of Illinois School of Social Work, but those were put on hold due to the coronavirus pandemic. Hall said changes to curriculum may be in the offing.

“I think we need to ensure that we’re providing multiple perspectives on history,” she said. “Globally speaking, history books have not provided that. It’s provided one perspective, particularly the White male perspective on history.

“I think there are many adults like myself who had many gaps in our formal schooling,” she added. “I’m the first to admit that I’m still learning and still having my eyes opened to historically significant events that I just wasn’t aware of. I hate it. It can be embarrassing to think, ‘I wasn’t taught that.’ But I think we all just need to be open to that and to do our best to learn and fill in the gaps.”

For Rantoul’s school districts, the challenges are different, and so are the opportunities. White students made up 40.3 percent of the Rantoul Township High School student body in 2018-19, while 27.8 percent of its students were Black and 22.8 percent were Hispanic.

“It puts us in a position where we have a wonderful opportunity because we have that diversity to be able to genuinely live out the things that we want to put into place,” Superintendent Scott Amerio said. “Other school districts might have a little harder time because they don’t have diversity, but because we have diversity, we have an obligation and a responsibility to make sure we’re addressing it.”

One hurdle that Amerio and his administrators haven’t been able to overcome, though, is the ability to hire minority teachers. Rantoul doesn’t have a single Black teacher in its district, and it hasn’t had more than a handful in recent decades, Amerio said.

“Our staff does not reflect the diversity in our school, and to hire staff that does reflect that has been very difficult for us,” Amerio said. “We talk about it at least a few times every year.

“It makes it more difficult because our students of color are not seeing people that look like them in the hallways. And as much as we make a really concerted effort to try to be as inclusive as we can with all of our students and make them feel comfortable, there’s just something when you see someone that looks like you that there’s an initial comfort level.”

Champaign has seen its own hurdles with racial diversity in its elementary schools 22 years after implementing a schools-of-choice policy that was supposed to address that issue. The district also faced criticism by the NAACP and ACLU in December for its failures in addressing the achievement gap between Black and White students.

The problems are complicated and deep. But for one day, school board members could smile and know that they began the process of solving them.

“It took a long time, but here we are, and I’m so happy,” board member Chris Kloeppel said. “It’s the first step, and it’s not the last step. We’re going to falter, but let’s keep moving.”