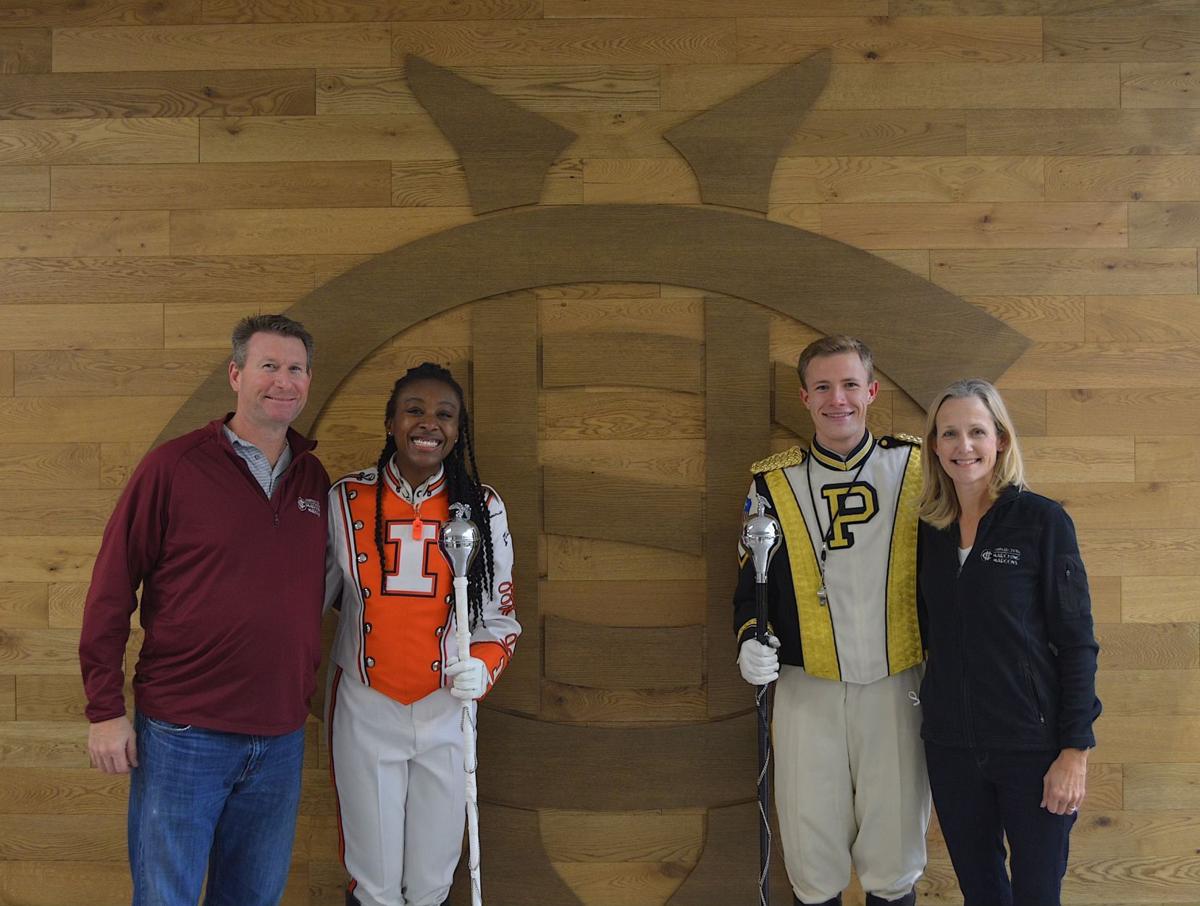 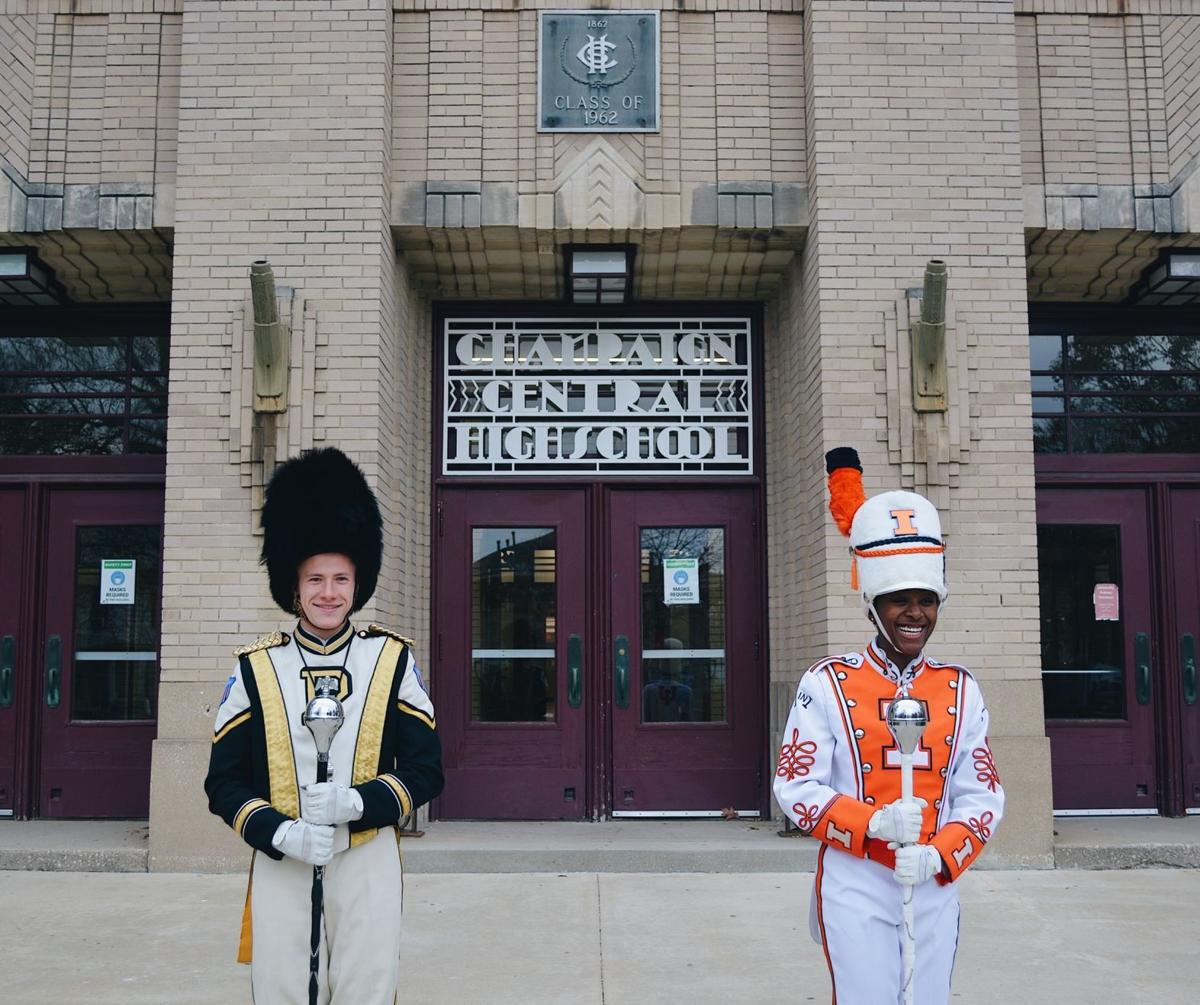 Champaign Central has plenty of claims to fame. Thanks to Enddy Almonord and Lorin Nugent, you can add “Drum Major High.”

Starting in 2019, Almonord became one of three drum majors with the University of Illinois’ marching band.

Drum majors wear the cool hats (called a busby) that denotes the position. In 2020, Almonord was joined by Nugent, who held the same job at Purdue. His headgear was the bear hat.

“Unfortunately, we don’t get to keep that,” Nugent said.

During Thanksgiving week, Almonord and Nugent returned to their high school to say hello and take pictures with John and Jennifer Currey, who run the Central band program.

John, in his 24th year as the school’s director of bands, never had a graduate become a Big Ten drum major until Almonord. Nugent doubled the number.

“They’re both outstanding individuals and leaders,” said Jennifer Currey, in her 14th year as assistant director of the Central bands. “We obviously are extraordinarily proud of them. But also not surprised, because they’ve earned the recognition they’re getting.

“They are both top-notch people.”

Almonord and Nugent returned the praise to their teachers.

“I have to credit the Curreys,” Almonord said. “A lot of it, especially when I was in high school, was pushing me and telling me that I could do it. When I first auditioned on the oboe, I was absolutely terrible. But they said they would give me a shot. That’s how I eventually made it to the Marching Illini. With their push and with their guidance is how both of us were able to earn a pretty cool spot in the Big Ten. Very unique.”

“It’s really a testament to how hard the Curreys work to make their band program so special for the students at Central,” Nugent said. “Enddy and I owe a lot to our band experience at Central.”

Almonord saw plenty of familiar faces with the Marching Illini. She was one of 11 Central graduates with the band this year.

The marching days are over for Almonord and Nugent.

Almonord, who played the saxophone at Central and the sousaphone at Illinois, is in her last semester. Her final appearance with the Marching Illini came Nov. 27 against Northwestern.

The political science/Arabic major will graduate in May.

She lives in Champaign with her mom, Daneline. She plans to work next school year before applying for law school.

“I’d like to find something in the non-for-profit sector,” Almonord said. “I’m really interested in immigration rights and civil rights, social justice.”

She can’t imagine her life without an instrument in hand.

“It might be time to pick up the oboe,” she said.

Nugent graduated from Purdue in December with a degree in aerospace engineering and a minor in mathematics. He is leaving Friday for a job with a company in Colorado.

Nugent will begin grad school in the fall, with the destination to be determined.

Nugent, the son of Tracy and Claudia, had an internship at NASA last summer.

“It was a great experience,” he said. “It was virtual, unfortunately. I was working from Champaign with a team that was based in California.”

In the future, Nugent hopes to work as a mission design engineer.

“As I’ve learned more about it, it’s been the thing that’s interested me the most,” Nugent said.

On game days at Purdue, the two drum majors are responsible for managing and directing the band.

“We’re designing what songs to call up and playing stuff between downs,” Nugent said.

Taking leadership roles in their respective marching bands was important to Nugent and Almonord.

Nugent decided to add another semester to his time at Purdue so he could have a full season with the marching band. His 2020 campaign didn’t include any on-field performances because of COVID-19.

“We still had a marching season,” Nugent said. “What Purdue did is we split into three platoons, and we did shows that were more spread out on the field.”

The shows, with musicians wearing masks, were recorded and made available on the internet.

The 2021 season saw a return to normalcy.

“We were all excited to get back into the stadium,” Nugent said.”We had a very good band.”

It was a big year for the band and the team. Jeff Brohm led the Boilermakers to nine wins, including a thrilling 48-45 victory against Tennessee in the Music City Bowl.

Nugent and his bandmates made the trip to Nashville, Tenn., in Nugent’s final appearance with the 395-member group.

There was some controversy involving the Purdue band. For a Sept. 18 game at Notre Dame, the Boilermakers weren’t allowed to bring their 10-foot drum into the stadium. Notre Dame was roundly criticized for the move.

“We formed our drum on the field as a marching formation as kind of ‘We still want to bring our drum, and here it is,’” Nugent said. “We still brought it to Notre Dame, we just had to keep it outside the stadium.”

Almonord spent three years as drum major at Central. (She played oboe in the wind symphony.)

In 2017, while still in high school, Almonord was a drum major at the Macy’s Thanksgiving Day Parade.

Now 21, Almonord wasn’t sure she was going to join the Marching Illini until a month or two before graduating from Central.

She had heard a lot about the Illini band over the years and decided to be a part of it. Almonord talked to Marching Illini Director Barry Houser, who suggested she take up the sousaphone, a need instrument for the band.

“I got to march my first year,” she said. “I was like, ‘I’ll try out for drum major.’ I really liked the service aspect of it. It worked out OK.”

“It seemed fun,” she said. “A little bit daunting. A little bit of a challenge. It’s a really big instrument. I was like, ‘This will be pretty cool to figure out.’”

Drum majors don’t continue to play their instruments with the band. Their time is spent conducting and teaching.

Being part of the Marching Illini, which numbered 400 in 2021, became part of Almonord’s education.

What did Almonord learn while being a drum major?

“The first thing that comes to mind is just collaboration,” she said. “It’s such a big group of people. It’s definitely a leadership role. That doesn’t mean you’re the person on top at all. It’s listening to other people, figuring out what’s best for the whole group.”