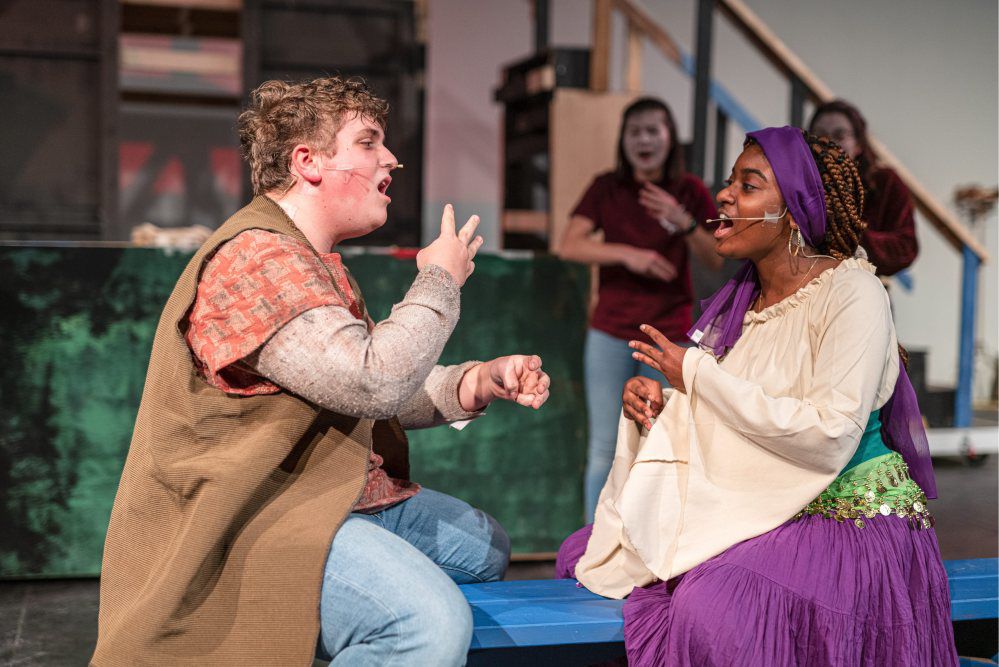 Ricky Wilberg, left, portraying Quasimodo, sign with and Anisa Chatman, portraying Esmerelda, during a dress rehearsal for the joint Central-Centennial production of 'The Hunchback of Notre Dame,' which opens Thursday, Feb. 13, 2020, at Centennial High School in Champaign. 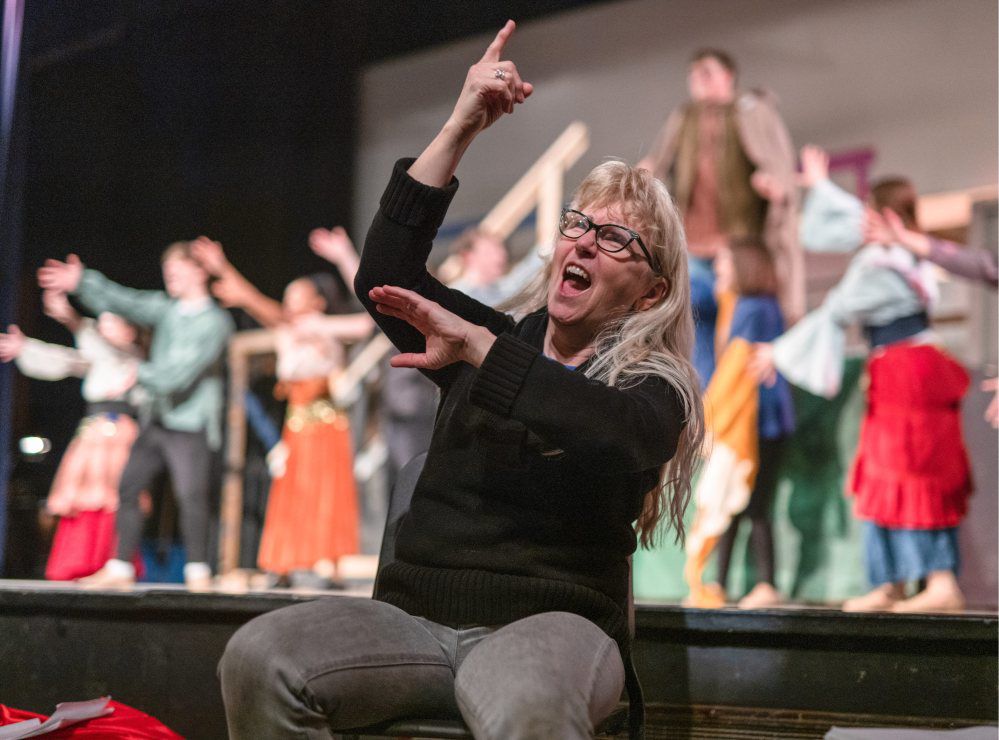 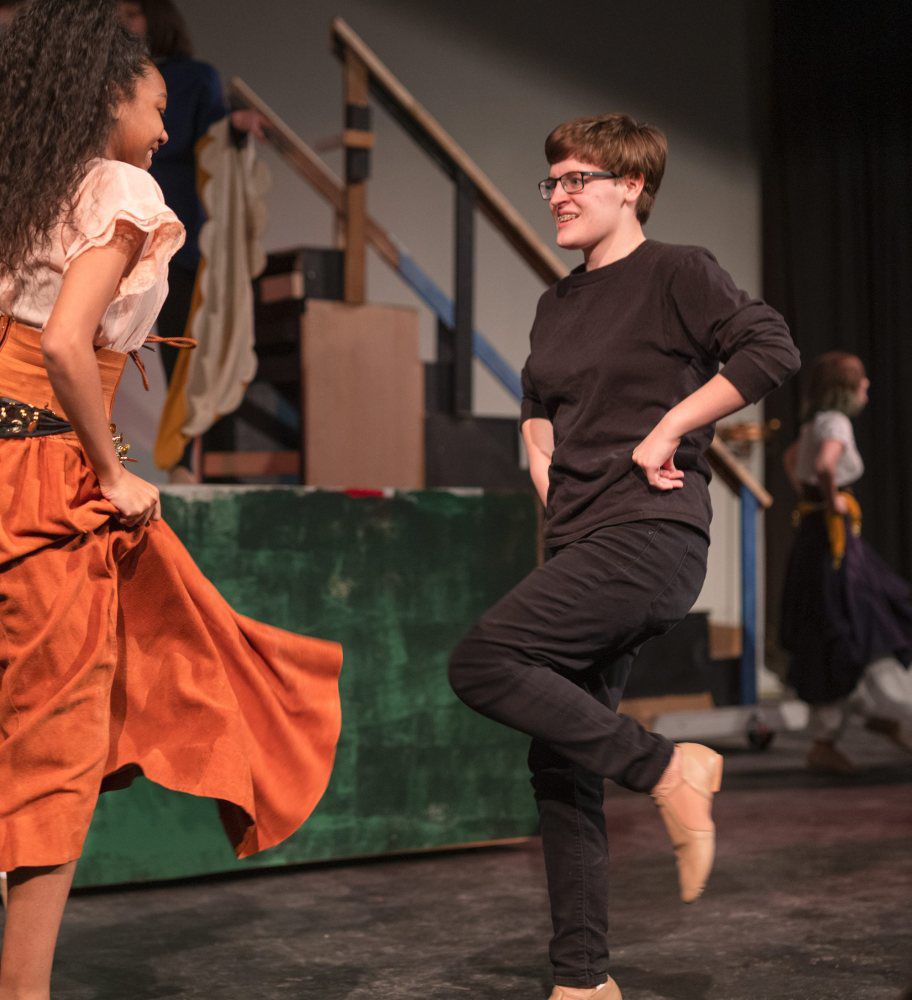 Jaime Tiger, who also portrays Quasimodo in the joint Central-Centennial production of 'The Hunchback of Notre Dame,' already had a background in sign language before taking on the role.

Ricky Wilberg, left, portraying Quasimodo, sign with and Anisa Chatman, portraying Esmerelda, during a dress rehearsal for the joint Central-Centennial production of 'The Hunchback of Notre Dame,' which opens Thursday, Feb. 13, 2020, at Centennial High School in Champaign.

Jaime Tiger, who also portrays Quasimodo in the joint Central-Centennial production of 'The Hunchback of Notre Dame,' already had a background in sign language before taking on the role.

CHAMPAIGN — Jaime Tiger wanted badly to connect with his stepbrother, Dakota, and sister-in-law shortly after their parents married three years ago, but it wasn’t so easy.

Dakota, who lives across the country in Rochester, N.Y., is deaf. And while the Centennial graduate could read lips, making his new stepbrother placate him didn’t sit well with Jaime.

So when Dakota and his wife made the trip to Champaign and they’d poke their head in Jaime’s room, they’d catch him practicing American sign language.

For three years, he’s learned independently. And it just so happened that this spring, Champaign Central theater director LaDonna Wilson had an idea that fit squarely into Tiger’s life.

Wilson had worked on a play, “Children of a Lesser God,” over a decade ago, when she brought in American sign language interpreter Bunny Berg to work with an actor who played a deaf character.

This year, she decided to team up with Berg again. And this time, she wanted to take an even deeper approach to integrating sign language.

When putting together “The Hunchback of Notre Dame” for a joint production between Champaign Central and Centennial high schools that opens Thursday at Centennial, the idea to incorporate sign language dawned on her.

“One thing that struck me is how it discusses his hearing loss and how that happened because of the bells,” Wilson said. “When I heard this show was going to be available, that was one of the first things I thought of, incorporating sign language into this show.”

In the play, Quasimodo signs with the characters he feels connected to, including the gargoyles who come to life and Esmerelda, who becomes Quasimodo’s friend. With other characters, he doesn’t sign, which Wilson said shows the distance between those characters.

Teaching a new language to a group of high school students was a massive task. Berg began by teaching the basics, then going through each actors’ script line by line.

“This is very innovative,” said Berg, who worked with Dakota Tiger when he was in high school. “They’ve done this kind of thing on Broadway, where they had the hunchback sign, but not in high school.”

Luckily, one dedicated sophomore actor had been studying sign language for three years. Tiger, who hopes to pursue theater in college, was an obvious choice for the main character, Quasimodo, in a play that alternates between two casts with each performance. Tiger has been able to help other students along as they learn a new language, or at least to translate their lines.

One of those actors is Ricky Wilberg, the other Quasimodo. Tiger said he’s been proud of the effort the Central junior has put in learning to sign for the show.

This experience has also helped Tiger accelerate his learning of sign language, and he’s begun to write what he calls a “senior thesis,” which is not something required for any class, on a term he coined as “theatrical sign language.”

“I’ve actually realized the way that the people in theater use ASL,” he said. “It’s a lot more expressive than conversational, because in theater, you have to be dramatic. In music, you have to change the rhythm, which is what a lot of people have trouble with. ... It’s very lyrical. I have to think of it as choreography and less as signing.”

The acceleration has taken on greater importance recently. Dakota and his wife had a child, Talisa, who is deaf.

“Now that I have a niece, it’s everything,” Tiger said. “I want to be able to talk to her.”

His desire to learn sign language started off as simply a way to connect with his new family members. Now, he’s connected it to his passion, musical theater, and he hopes that someday this type of production will be completely normal.

“Deaf people go to all of the same things hearing people go to, but it’s different than having a show interpreted when you’re actually integrating sign language into a show,” Tiger said. “We’re doing it so well, and I think if other high schools start doing it, it’ll be a lot more normalized.

“My family loves it, especially my brother. ... He’s really proud.”

What: Champaign Central and Centennial team up to put on “The Hunchback of Notre Dame,” with the actors using sign language throughout the show.