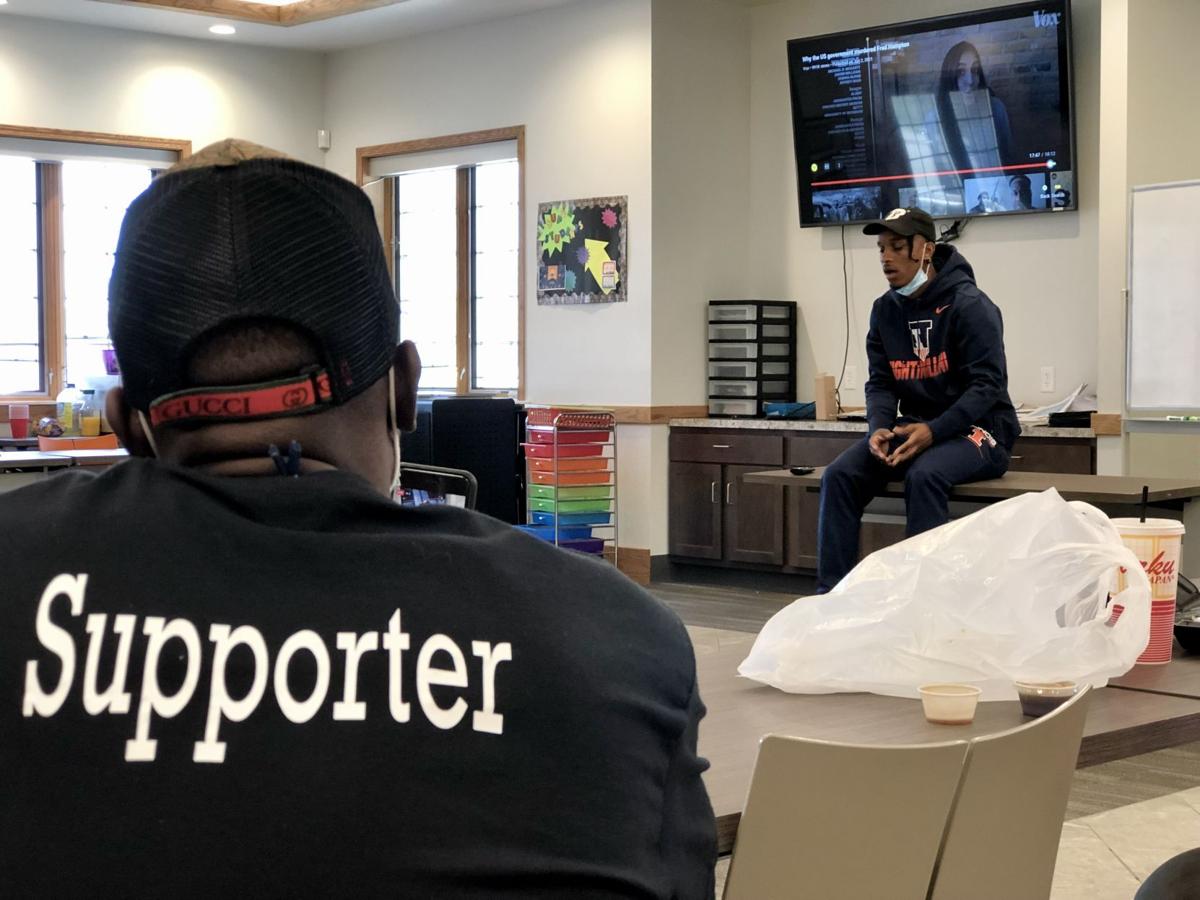 Illini basketball star Trent Frazier speaks to participants in the YouthBuild program Friday at the Housing Authority of Champaign County’s office in Champaign. 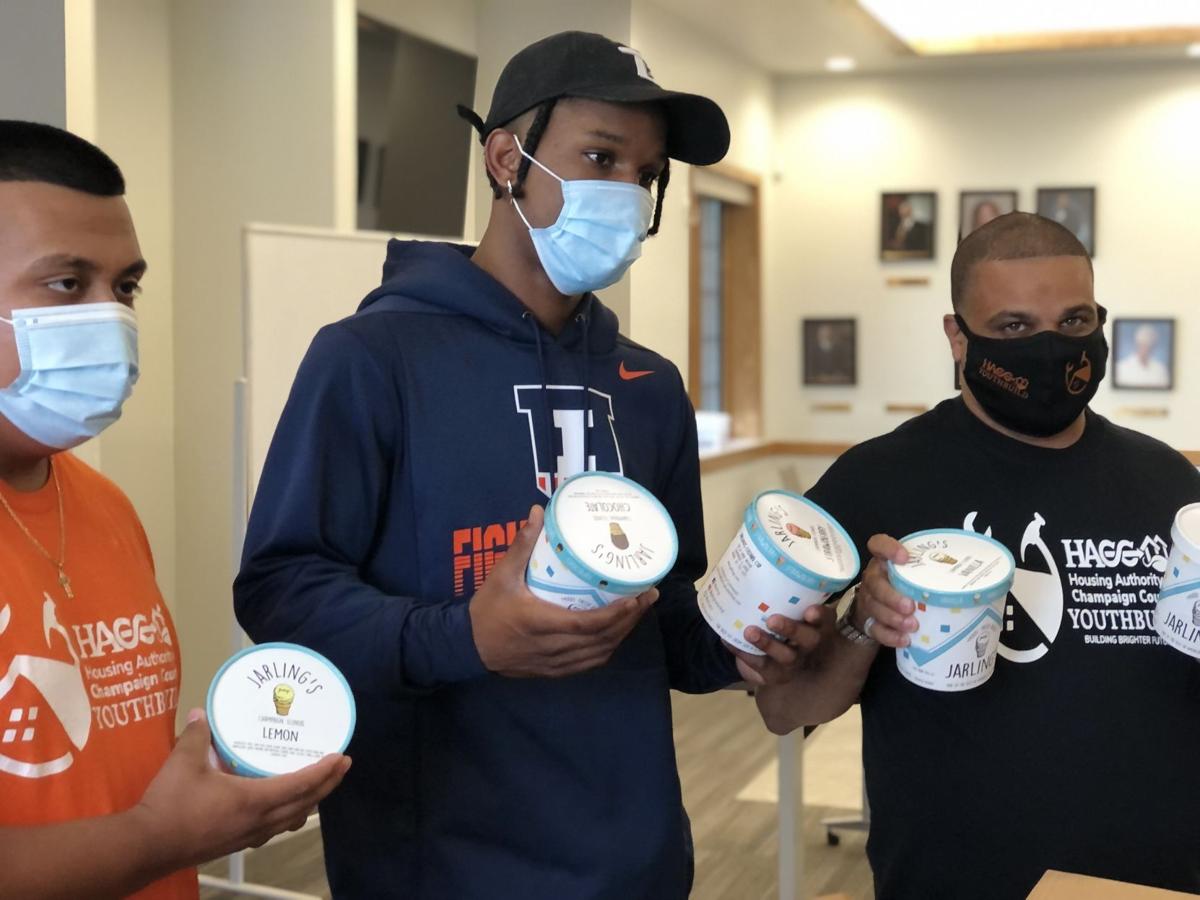 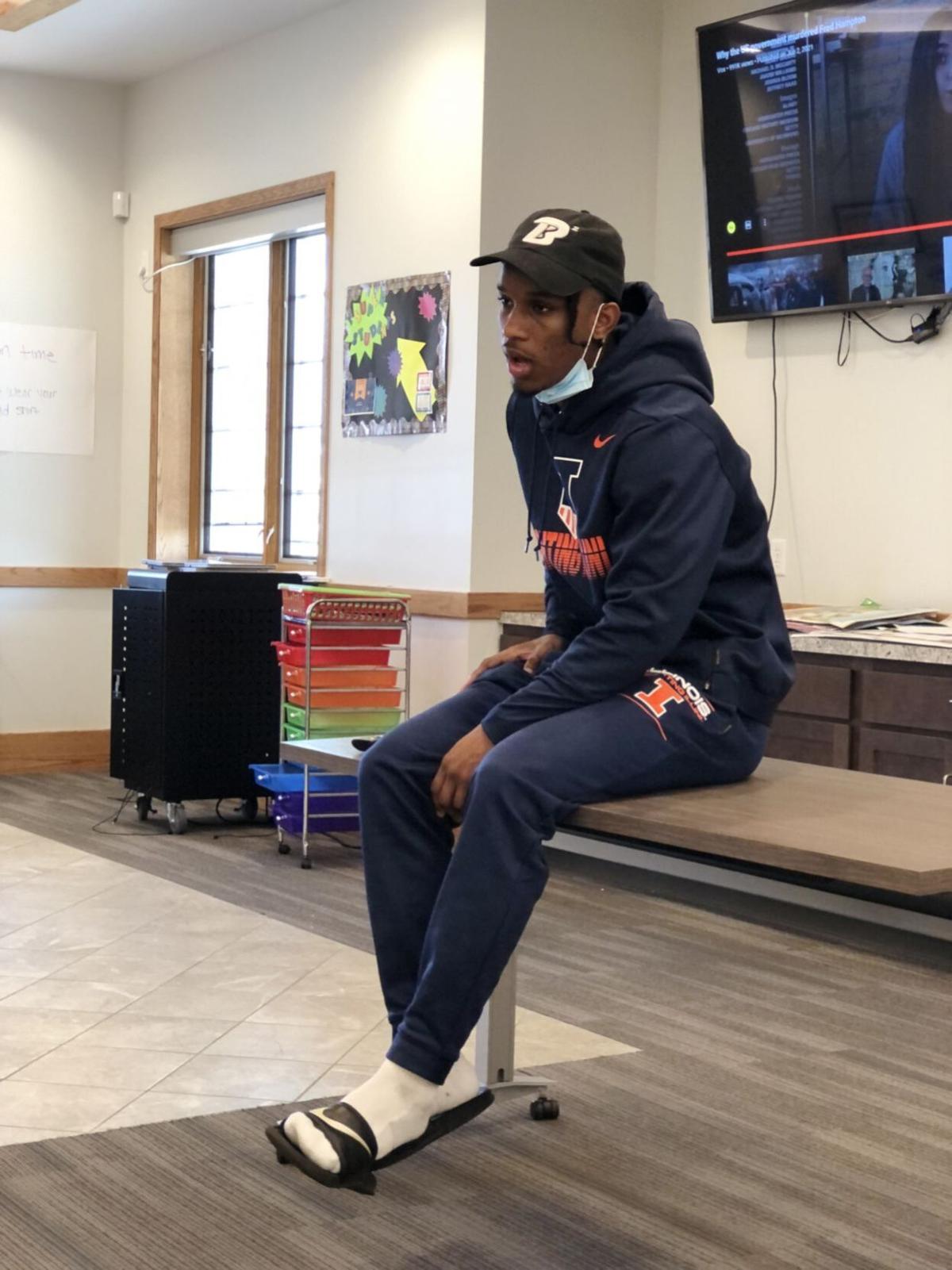 Trent Frazier shares his life story with kids and supervisors at the YouthBuild program last month at the Champaign County Housing Authority.

Illini basketball star Trent Frazier speaks to participants in the YouthBuild program Friday at the Housing Authority of Champaign County’s office in Champaign.

Trent Frazier shares his life story with kids and supervisors at the YouthBuild program last month at the Champaign County Housing Authority.

CHAMPAIGN — The group of participants in the YouthBuild program were still a bit shy after hearing the life story of Illini basketball fifth-year senior Trent Frazier.

But once they learned the star guard had a “blue check” on Twitter and Instagram, the cohort exploded in disbelief.

“That means he’s verified! He’s a star,” kids exclaimed to the event’s sponsor, James Barham. “They were going crazy,” he said.

With the financial support of Barham Benefits, a handful of at-risk kids in the YouthBuild program got an hourlong visit from Frazier, who shared the first-hand account of his upbringing, of falling in love with basketball, of how he’s stayed disciplined just months before he gets his degree.

“What I was afraid of was the streets,” he told them. “I had friends who stayed in the streets, and I think right now, the biggest thing you can take away from this is to not be afraid of saying no. It’s about decisions. One bad decision could turn your whole life around.”

It’s been a while since Frazier was growing up in the projects of West Palm Beach, Fla., with his mom and dad splitting five jobs between them.

If all goes as planned, this spring, he’ll be the first person in his family to graduate from college, with a bachelor’s degree in sports management.

“That ball’s going to stop bouncing one day, and with that degree, I’ll be able to come back to here, Champaign, wherever, and use that degree to coach basketball — if I’m wealthy enough, buy a recreation center and give back to the community,” Frazier said. “Just give people hope.”

After half an hour of sharing and answering questions, Frazier and his audience chatted over ice cream provided by Jarling’s Custard Cup.

The six-month YouthBuild program, put on by the Housing Authority of Champaign County, helps youths ages 16 to 24 who have struggled in the traditional school path obtain a high school diploma and get hands-on experience with the trades.

Housing authority Executive Director Lily Walton said it’s a second chance, but they don’t like to call it that: “It’s just the next step in their path.”

“Most of the students we serve come from word of mouth,” Walton said. “Students who’ve gone through the program, they’ve gone back and told their friends, cousins, people in the community, ‘This really helped me, I got paid when I was in here.’”

The program began in earnest last year, after the U.S. Department of Labor provided a $1.5 million grant in December 2019. The money covers the program for 84 kids over the course of 40 months; the housing authority has another 15 left to serve on this grant cycle.

Half the day is dedicated to obtaining an online high school diploma, while the rest is education in the trades — especially construction — and leadership training.

Plenty of YouthBuild graduates have found early success, like Jordan Borbely, a 20-year-old from Champaign who took to the program’s construction curriculum last year.

After getting some experience in the industry, Borbely returned as a vocational instructor for program that gave him that option in the first place.

“This program really does consist of students who don’t view themselves as having a lot of opportunities,” Borbely said. “I think people in the community who can come in and speak to them and provide guidance in a lot of ways is extremely beneficial. That support is something they’ve been missing for their entire lives, and getting it here, even if it’s a bit late, late is better than never.”

The state's highest honor will be bestowed upon eight Land of Lincoln legends, including three with Illini ties: Scott Altman, Carol Ross Barney and John Rogers.