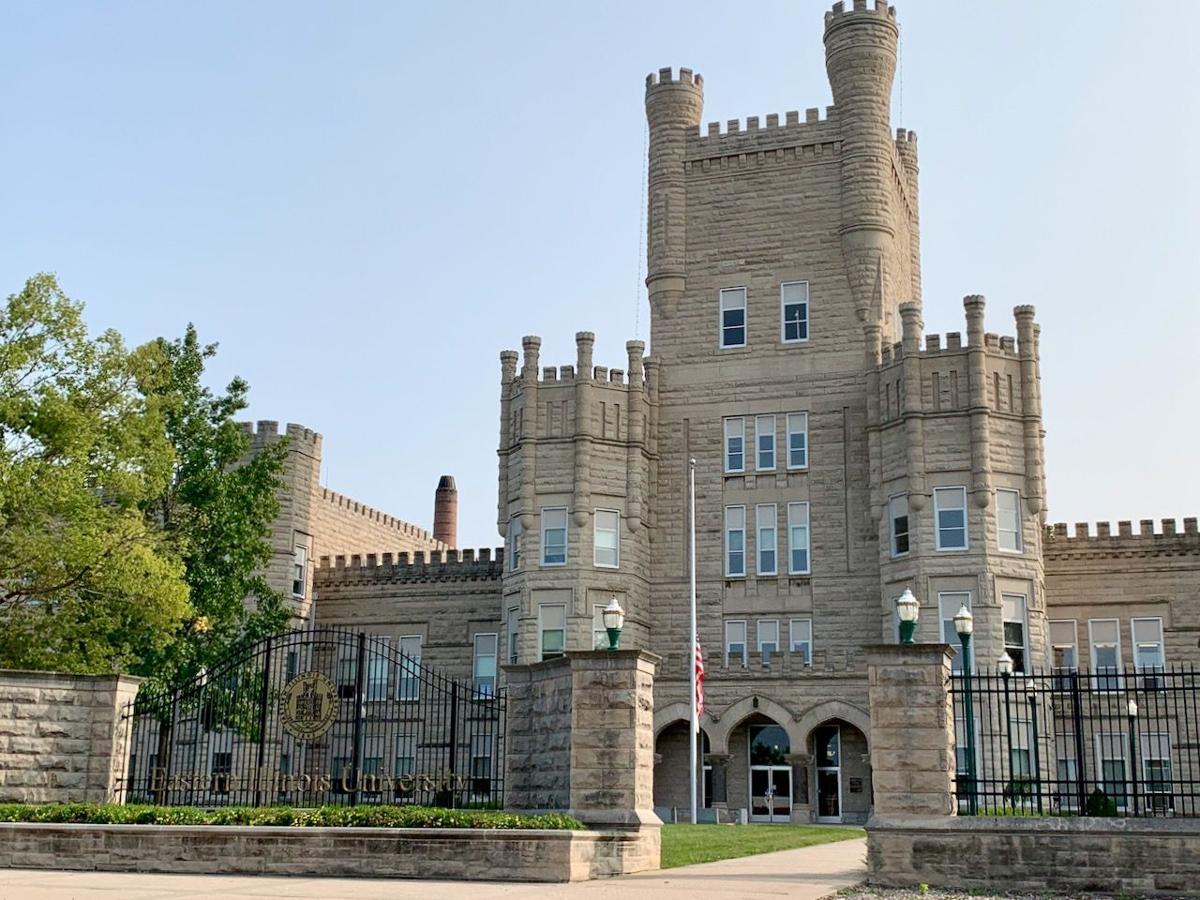 The Livingston C. Lord Administration Building, also known as Old Main, is the entryway to the Eastern Illinois University campus. 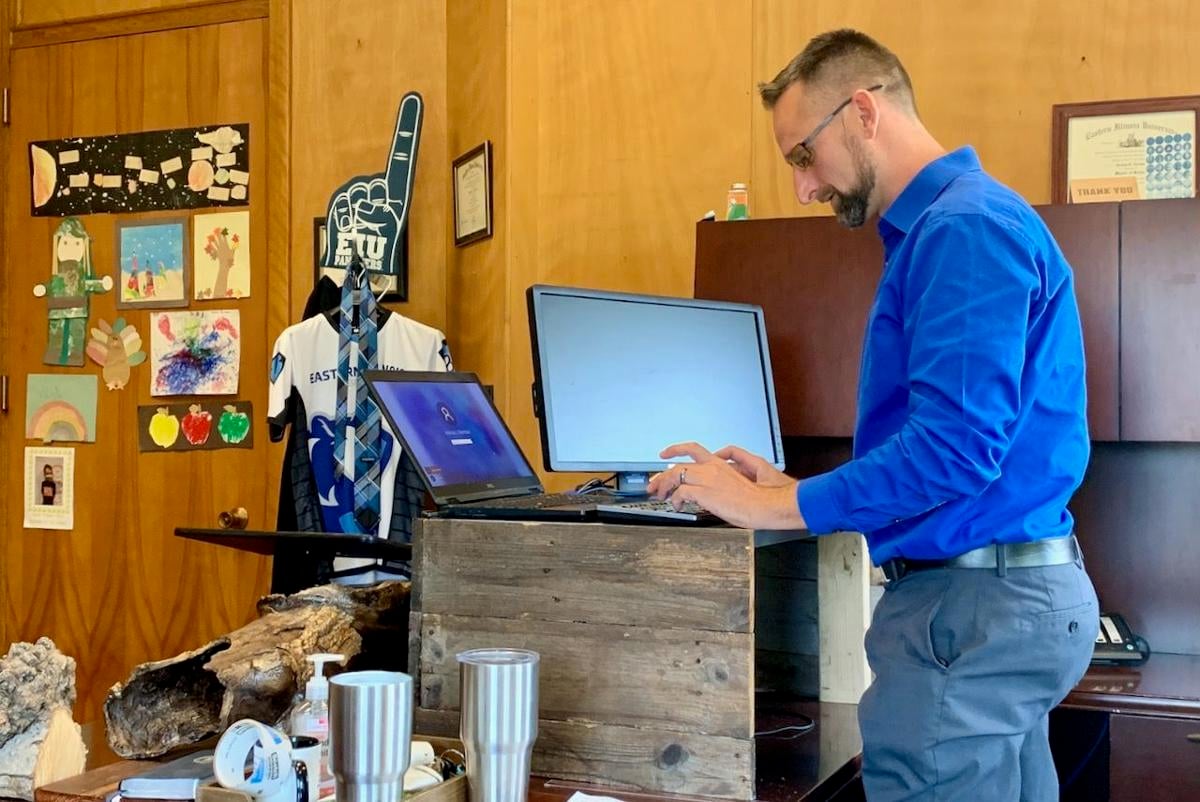 Josh Norman, vice president for enrollment management at EIU, works at his standing desk Tuesday on the second floor of the Livingston C. Lord Administration Building in Charleston. 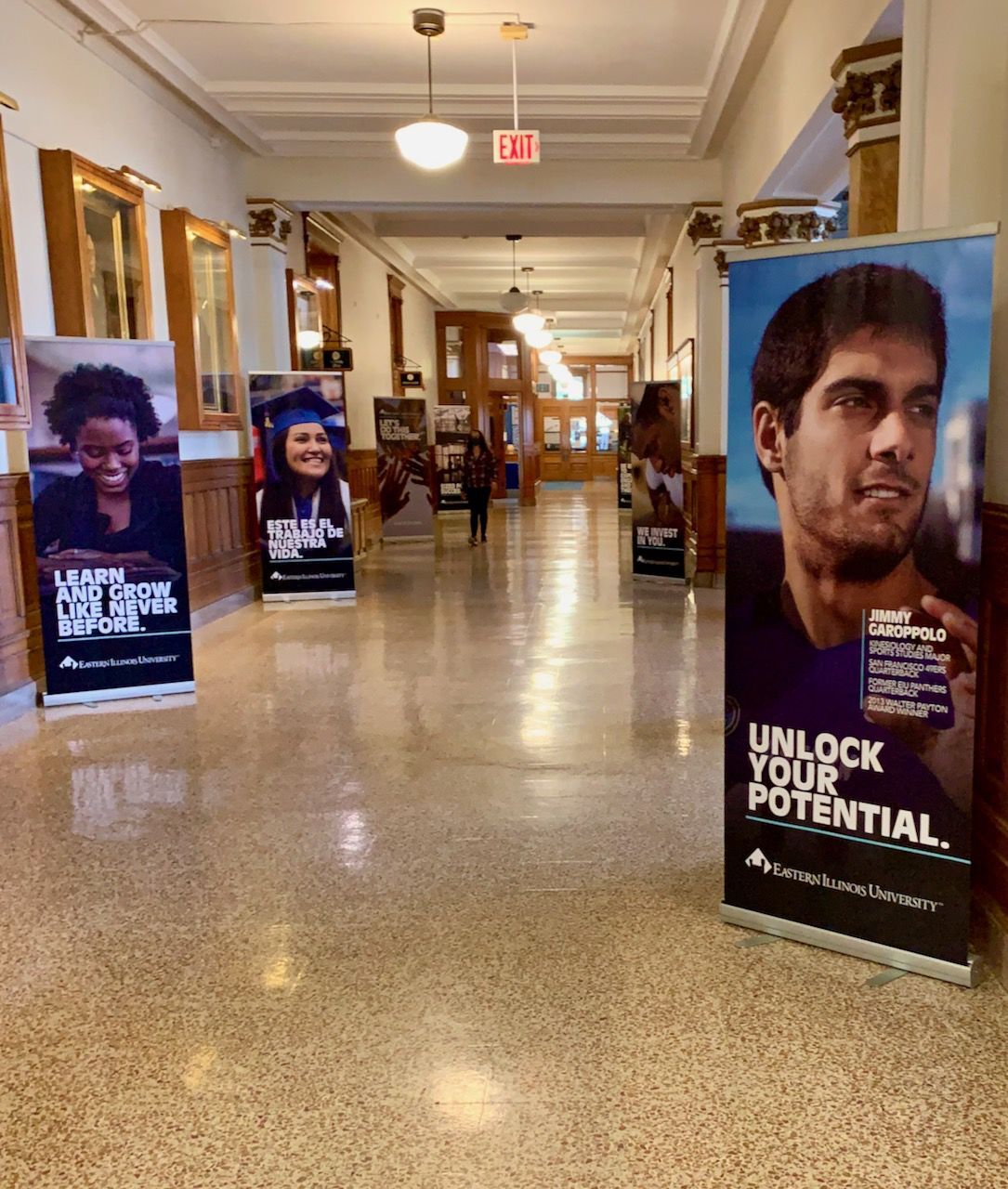 Eastern Illinois University utilizes one of its most well known alums in San Francisco 49ers quarterback Jimmy Garoppolo (right) in signage on campus. 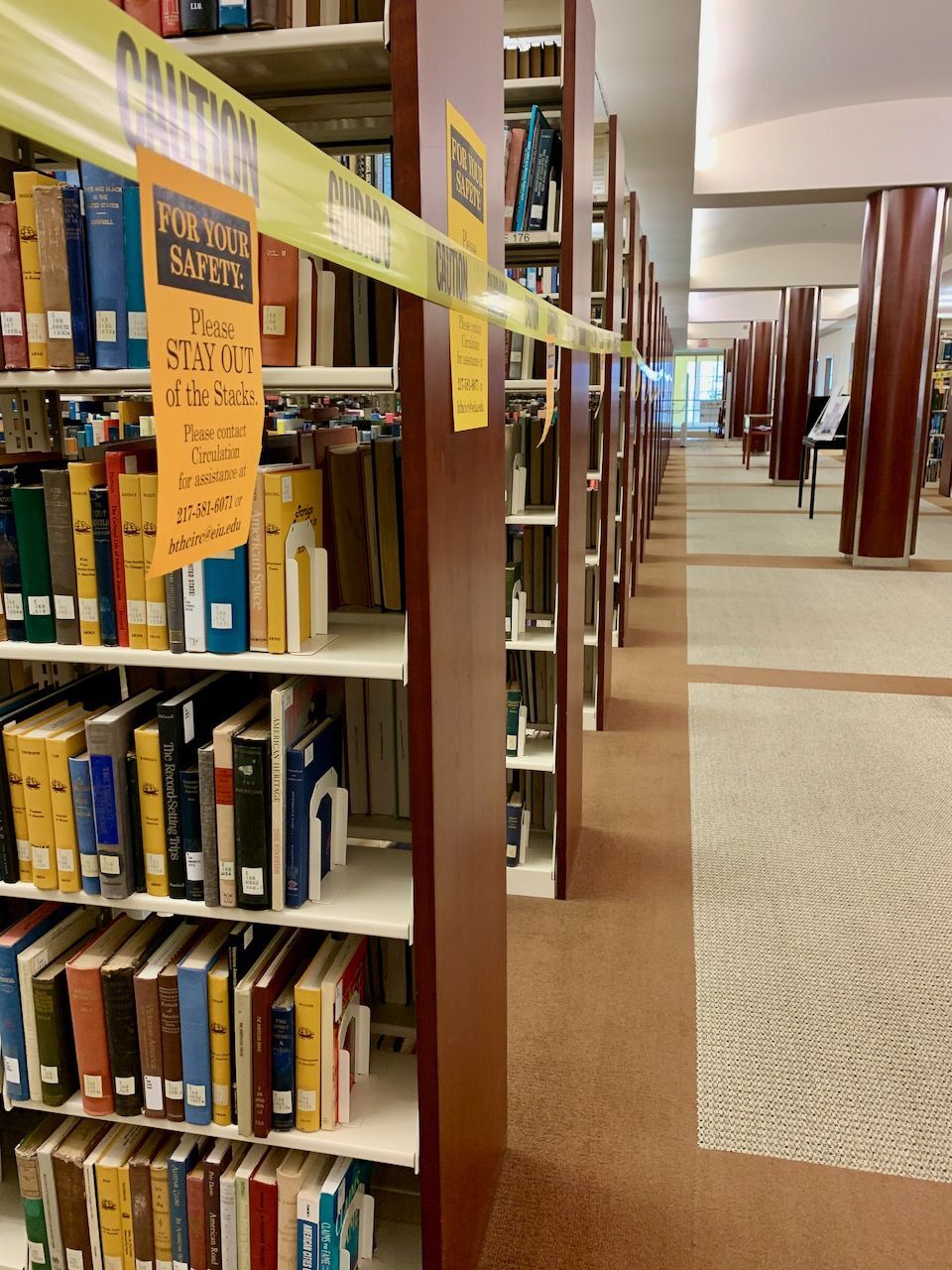 Students are back on campus at Eastern Illinois University in Charleston, but the ongoing COVID-19 pandemic has made Booth Library less of a gathering spot for students. 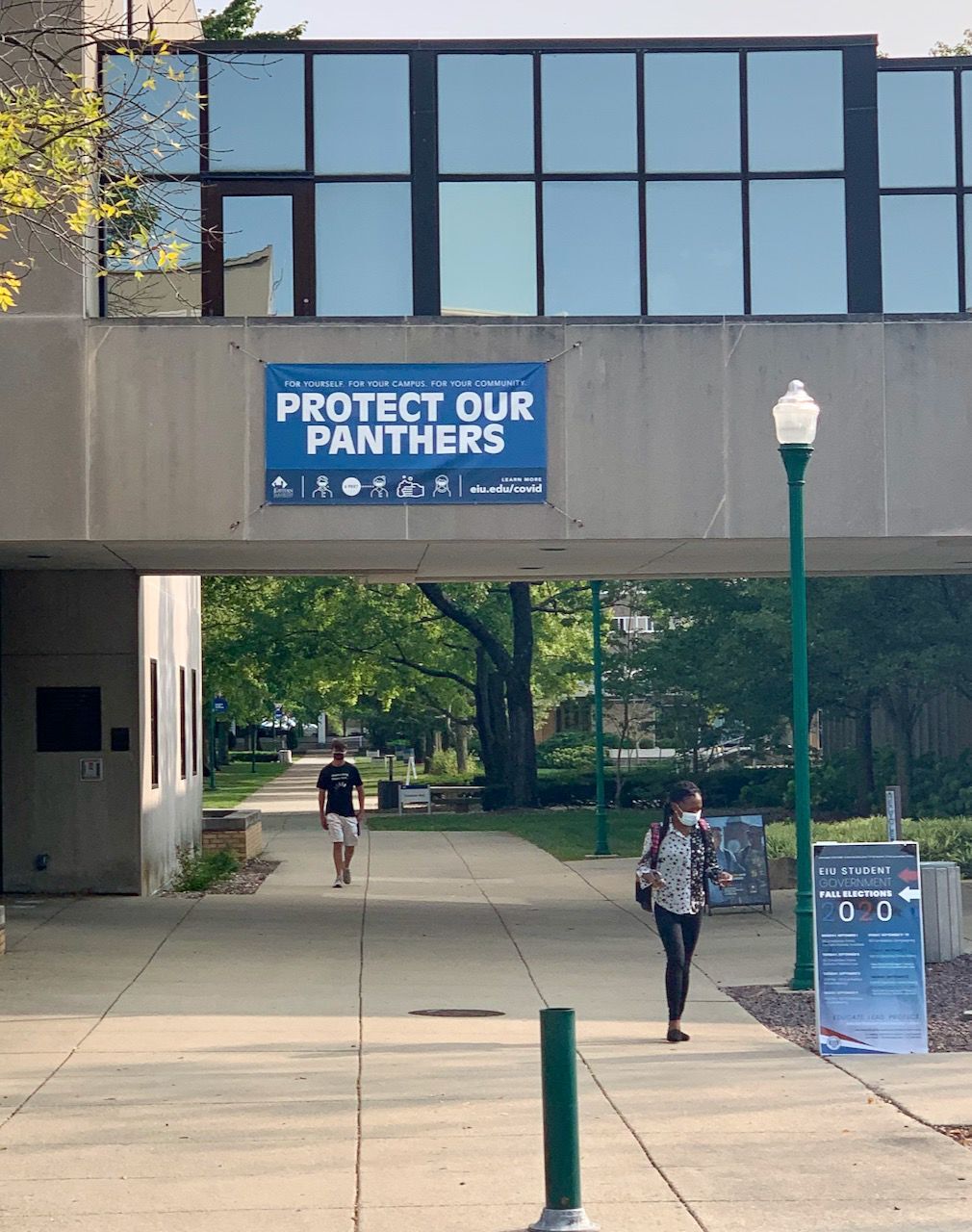 Eastern Illinois University students are required to wear face masks and social distance as much as possible on campus, with signs in multiple areas serving as reminder.

The Livingston C. Lord Administration Building, also known as Old Main, is the entryway to the Eastern Illinois University campus.

Josh Norman, vice president for enrollment management at EIU, works at his standing desk Tuesday on the second floor of the Livingston C. Lord Administration Building in Charleston.

Eastern Illinois University utilizes one of its most well known alums in San Francisco 49ers quarterback Jimmy Garoppolo (right) in signage on campus.

Students are back on campus at Eastern Illinois University in Charleston, but the ongoing COVID-19 pandemic has made Booth Library less of a gathering spot for students.

Eastern Illinois University students are required to wear face masks and social distance as much as possible on campus, with signs in multiple areas serving as reminder.

CHARLESTON — Positively 4th Street Records sits on the corner of Lincoln Avenue and Fourth Street. It’s the nexus of where the Charleston community blends into the Eastern Illinois University campus.

The first level of the two-story brick building takes care of all your music and dorm and apartment decorating needs. Tables full of CDs and vinyl records run the gamut from current popular artists to indie bands waiting to be discovered. The side room houses a wide variety of posters. Upstairs? All the Panthers gear an EIU student — or their parents … maybe especially their parents — could want.

The return of students to campus every August brings in new and long-term business alike. The more students that find their way to Charleston at the end of every summer, the better.

“This August, we were up, even considering COVID,” said Melissa Walker, who has worked at Positively 4th Street Records for nine years and has managed the business the last two-and-a-half. “The students have been coming back. The town is coming back. They’ve been really good to us.”

Three straight years of growth after EIU enrollment cratered to a low of 7,030 in 2017 continued this fall with a 10.5 percent increase. An enrollment of 8,628 means it is at its highest point since 2014, with the bottoming out in 2017 part of a decade-long annual decline.

That enrollment increased by a double-digit percentage from 2019 during a global pandemic, though, still came as a surprise. Campus visits became impossible. College fairs didn’t happen. The traditional admissions process wound up being anything but.

“We thrive on relationships,” said Josh Norman, EIU vice president for enrollment management. “We are known for personal attention. It’s what we do. To take that virtual, it was such a scramble.

“There was so much discussion and so many different surveys going out and talk about gap years. … The thing that was hardest for me around that subject was we know when students stay out of school, they stay out of school. They graduate and they think, ‘I’m just going to take the semester off; I’m just going to take this year off,’ and they don’t matriculate. That was my biggest concern.”

Those concerns ultimately didn’t come to fruition. At least not at the level Norman expected. Freshmen enrollment still increased at EIU from a year prior. So did the number of graduate students.

The number of student-athletes has also increased. That comes after athletic director Tom Michael was told to make scholarship cuts as a result of the budget impasse.

“Three years ago (EIU President David Glassman) asked me to cut 23 scholarships out of our allotment, which isn’t easy and obviously can have an impact on our competitiveness with some of our different teams,” Michael said. “We looked at that again and said, ‘OK, this is what we need to do over the next couple years.’ What we’ve actually done is increased our student-athlete enrollment by 10 percent as well.”

The most significant factor in this fall’s overall 10.5 percent enrollment increase, though, came in EIU’s growing dual-credit program that works with smaller, rural schools in East Central Illinois to provide dual-credit opportunities that might not otherwise exist given the necessary instructor requirements — namely a master’s degree. In those cases, EIU faculty become the faculty of record.

An emphasis on the dual-credit program saw that number jump from 1,580 in Fall 2019 to 2,228 in the 10-day enrollment numbers released earlier this month.

“We added a couple major sections from that population,” Norman said. “The thing that’s most exciting about that is the majority of those students are freshmen and sophomores (in high school). It creates an incredible opportunity for us as we engage in those partnerships with those institutions.”

The dual-credit students are included in EIU’s enrollment totals — a change that is reflected in the 10-day enrollment numbers since 2018. Doing so changes the ratio of on-campus and off-campus students with high school dual-credit included. The public numbers for Fall 2020 show 4,585 students on campus and 4,041 off.

Those numbers, Norman said, aren’t as accurate of a representation of students actually on campus this fall. The “on campus” and “off campus” denotations are based, he continued, on the modality of courses. The pandemic has pushed more courses online, and a student living in a campus residence hall taking all online classes would then be regraded as an off campus student for enrollment calculation purposes.

Norman said approximately one-third of the total student population is taking all in-person classes. One-third have a hybrid semester between in-person and online classes, and the other third are in all online classes.

“If you look at our new incoming — or freshmen and sophomore students — it’s closer to 70 percent (in person),” Norman said. “We really were intentional from a student success standpoint that these new students needed to be in person.”

The number of students physically on campus, though, hasn’t topped 6,000 since 2016. Businesses like Positively 4th Street Records and Bob’s Used Books just down the block on Lincoln Avenue (but seemingly further from the pull of campus) could benefit from continued growth in those numbers.

“Are those numbers of people who are actually here?” Bob’s Used Books owner and EIU grad Joe Judd said about the increase in enrollment this fall. “They also include high school students who are taking classes, which means nothing to us. The only thing that matters is whether people are coming here and going to school here.”

Judd, who owns Bob’s Used Books with his wife Lisa, is in the process of moving his store several blocks north to downtown Charleston. While they did have some EIU student traffic before the pandemic, the community at large was a bigger part of their business.

“Even before COVID, they weren’t our main source,” Lisa Judd said of the EIU students. “It’s not necessarily the students, but when there’s more students it’s their parents when they’re coming to visit or dropping them off or picking them up. We lost all those parents.”

Both Walker and the Judds agreed, though, that a healthier EIU made for a healthier Charleston.

Peak enrollment since 2000 came in 2006 at 12,349. The current strategic enrollment plan that runs through 2025 doesn’t include getting back to that mark.

“We’re not building an empire here,” Norman said. “We’re not trying to get back to 12,500. I’ve talked to the administration and said I really feel like our sweet spot is 9,000 to 10,000 on-campus students. I don’t want to stretch our infrastructure and have to start building again. I want the resources to go toward our students, our programming and supporting our faculty and staff.

“Unless the administration changes their mind or they stop listening to me, that goal — between 9,000 students and 10,000 students — is really where we want to be by 2025. We want to stay there and sharpen that focus on student success. Ultimately, our goal is to become a beacon of student success in the state and the county. That is where we want to get that people know EIU is a place where first generation and underrepresented students and any student can come and have an incredible opportunity to succeed, graduate and find their dream job.”

Maintaining the enrollment increases from the past three years is EIU’s next step. The selling point Norman said would continue to be stressed is the value proposition that is EIU. It has the lowest cost of attendance of any public university in the state, an average of a 14-to-1 student-to-faculty ratio and a graduation rate consistently topping 90 percent.

“I know that affordability and value are something we hear from our prospective students and families again and again,” Norman said. “It gets us in the conversation. A lot of times we have to change their minds. They think we’re the third choice, and we have to change their minds that we’re the first choice, but it’s that value that gets us in the conversations.

“It’s that private institution feel at the public institution price that really has made EIU attractive in a time when people are value sensitive. More than ever, people don’t want to just get in the door. They want to graduate, and they want to get in the door and graduate at a cost that doesn’t set them back with student loans for a decade.”

Fall 2020 numbers marked a third straight year of increased enrollment at Eastern Illinois University. A look at where EIU enrollment numbers have stood since 2000:

Year On Campus Off Campus Total