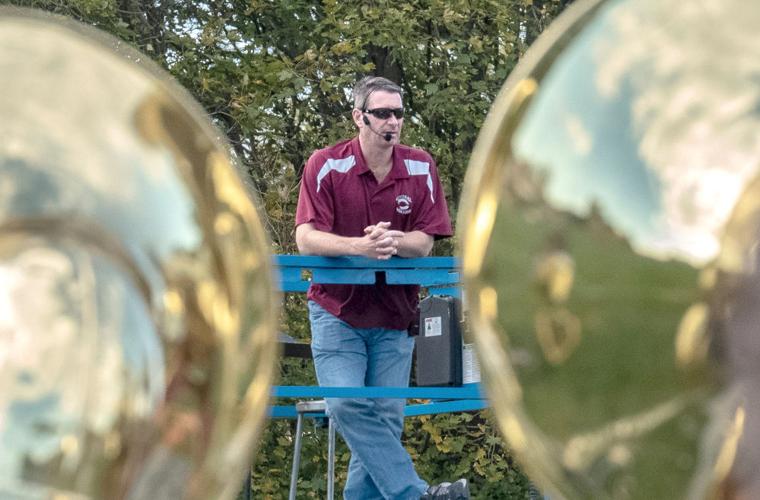 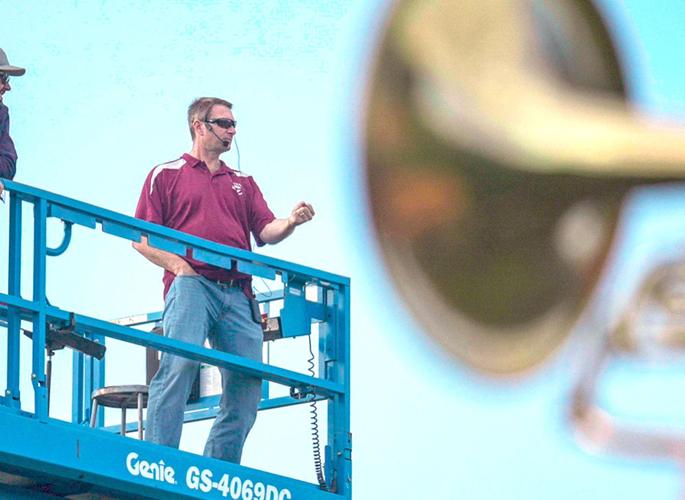 Champaign Central marching band director John Currey conducts his band from high above at their practice.

Champaign Central marching band director John Currey conducts his band from high above at their practice.

CHAMPAIGN — Champaign Central band director John Currey laughed as he looked at the pile of dirt at the edge of the practice field at Centennial.

A consequence of ongoing renovations at the school, the mound doubled as a literal manifestation of some of the difficulties he’s had to deal with in 22 years as the Maroons’ marching band director.

Central band members “had this attitude like, they’re going to overcome the obstacles in our way,” said Currey, who added that the school’s administration has been supportive of his band.

“And I think we’ve done a pretty good job of overcoming a lot of obstacles, like this dirt pile. We just kind of deal with what we’ve got and they do the best they can.”

On Friday, Currey will receive an ACE Award, handed out by 40 North — for his efforts in the band room and on the field, and for “advocating at the state and national level for equal access to music education initiatives,” the arts organization said.

Other bands pull into competitions with fancy costumes, expensive flags and elaborate props. Some of those schools spend in excess of $100,000 on their show for the year, said Central’s assistant band director and John’s wife, Jennifer Currey.

Central spent around $16,000 on its show this year, pulling together money from $100 student fees and what the booster club raised through fundraisers.

Currey’s bands, though, consistently compete with the best in the state and, in some cases, the country. Five times, Central’s jazz band has been among 15 nationally to attend the Essentially Ellington High School Jazz Band Competition and Festival at Lincoln Center in New York. No other Illinois school has been chosen more than twice.

“I think he sets such high standards that kids are drawn to that because they can see the results of that teaching, what he’s doing with them,” his wife said.

When Currey took the job 22 years ago, he didn’t realize teaching high school band in Champaign would become his life’s work. Originally, he thought he’d work in the realm of college marching bands.

The University of Massachusetts graduate’s experience at that level runs deep. In 1990 and ’91, he performed around the world with the Cadets of Bergen County Drum and Bugle Corps, which won a world championship during his first year. After his time at UMass, he was a teaching assistant with the bands at Illinois and Notre Dame.

He had an offer to work for a college marching band on the West Coast, but turned it down because Jennifer, who he had met while both were at Illinois, was studying at the Peabody Conservatory of Music at Johns Hopkins University in Baltimore. After teaching at the high school level in Maryland, Currey took a job in Munster, Ind., in the Chicago suburbs.

In 1998, he was offered the job at Champaign Central. It wasn’t a program that would come with the extensive resources that some schools had, but it offered him flexibility to run the show as he saw fit.

Things haven’t always been easy. For a few years, Currey’s marching band was forced to practice at West Side Park, where they regularly received noise complaints and members backed into trees.

The Maroons still don’t practice on site, traveling to Centennial every day to tune up on the north side of the school.

“There have been regular conversations from people asking John, ‘Hey, I’ve got an opening up here in X suburban district,’” Jennifer said. “That’s been a constant throughout our time here.”

The Curreys, though, don’t see themselves moving. They like the diversity that Champaign-Urbana offers.

And the live music scene, they say, is far more accessible than in many bigger cities. On a given evening, there’s a good chance the Curreys are at the Iron Post listening to live jazz for $5 or less.

“That was what kind of drew us back,” Jennifer said, “and that’s one of the things that will make it hard to ever contemplate leaving.”

And soon, the Maroons won’t be quite as scrappy. Instead of the cramped band room where the students barely fit, Unit 4’s renovation calls for a brand new space.

“We’ll actually have a classroom where they hear themselves, a classroom that they can record in,” Currey said. “Some of these schools that get to go to Lincoln Center and those kinds of things have the ability to record right in their band room and record multiple times. They don’t have to go to a studio and pay to do that. They can just do it right there in your own room.”

This week's stop in our series on local businesses with stories to tell: Champaign’s Dixon Graphics, a 2019 Arts, Culture, and Education Award winner for, among other things, 'going out of their way to support, advocate for, advise, encourage, and promote local artists as they conduct their art businesses.'

URBANA — If you’ve ever enjoyed listening to improvisational and avant garde jazz, Balinese …