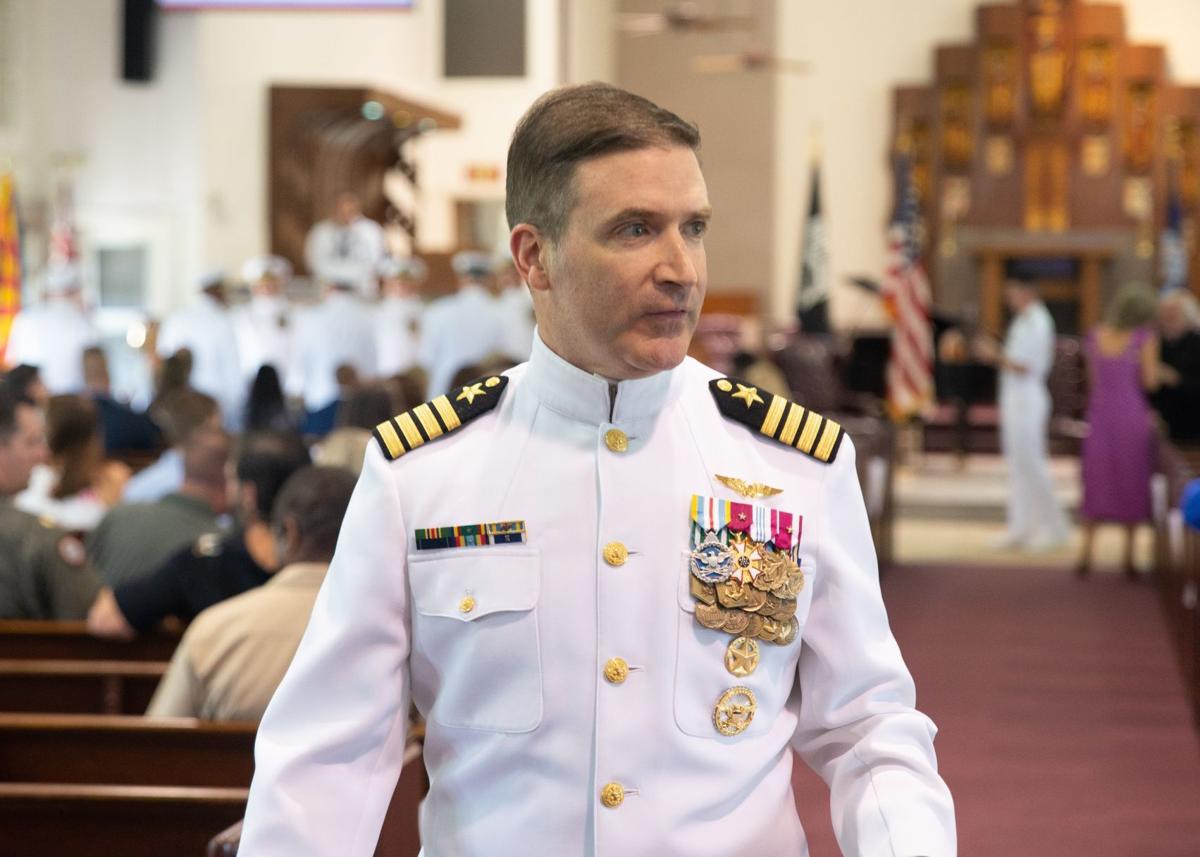 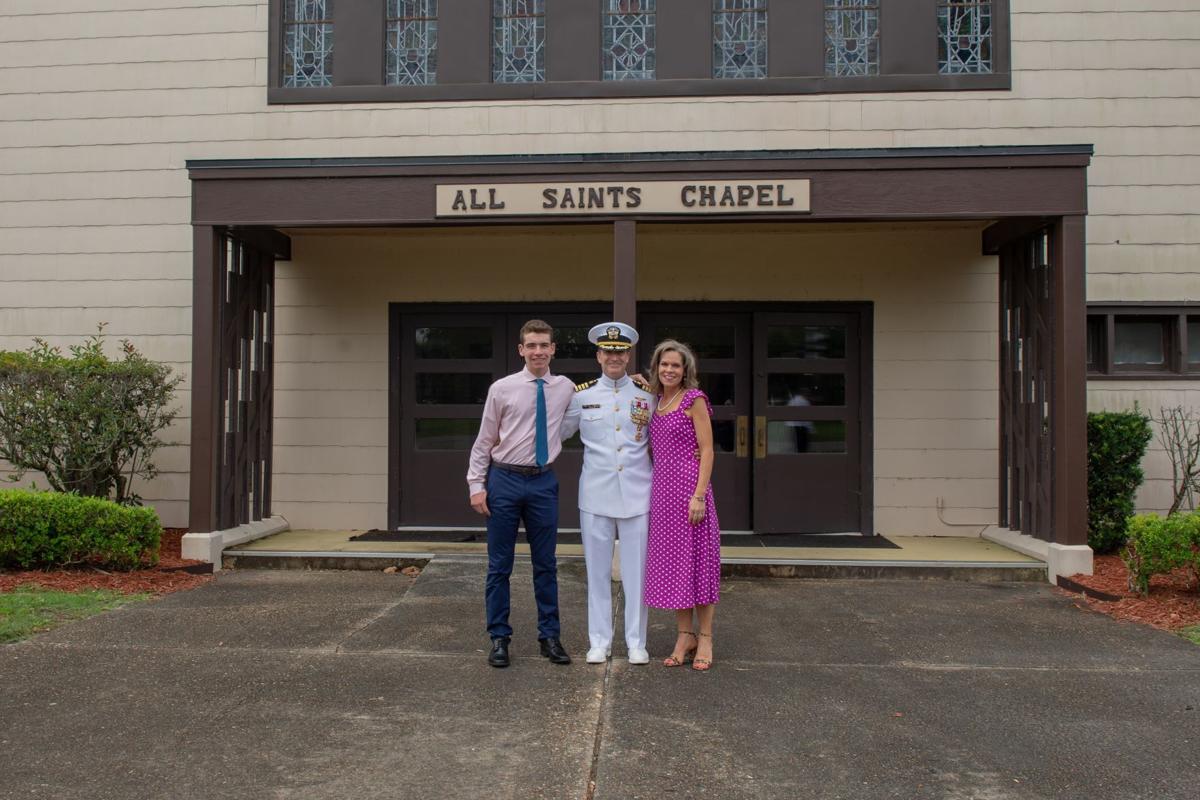 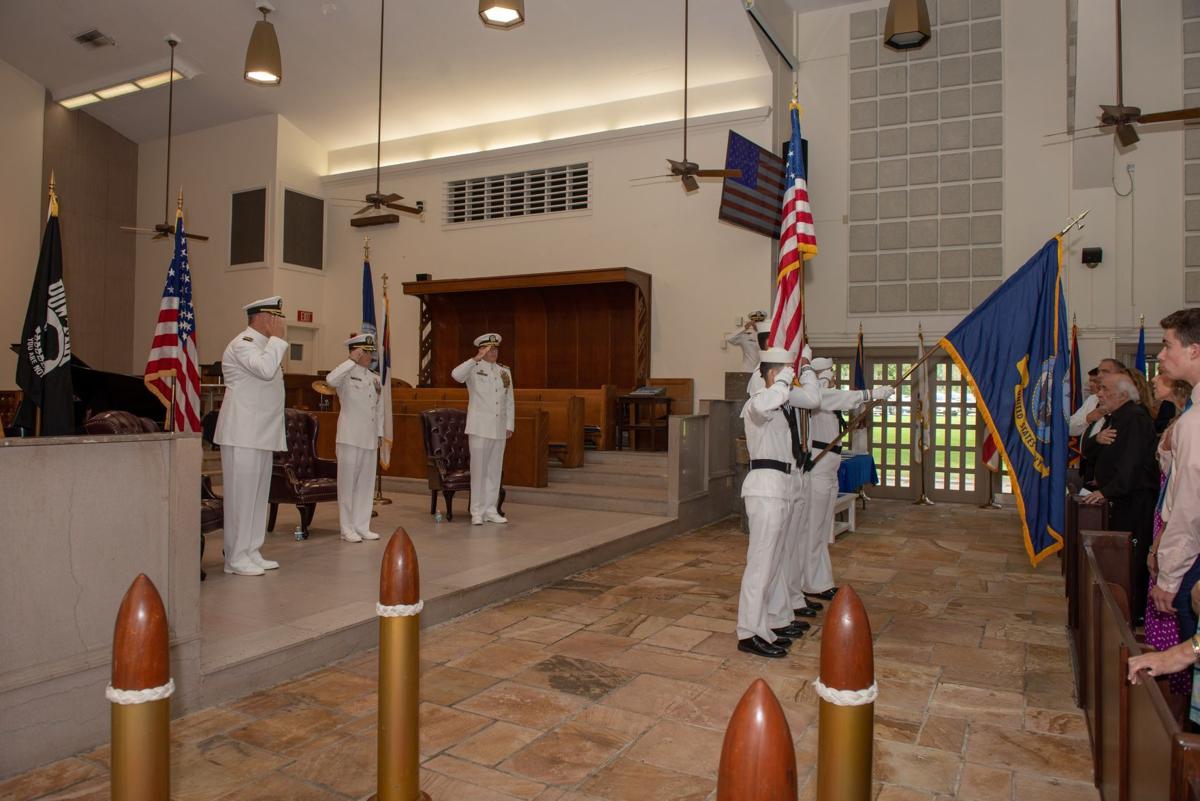 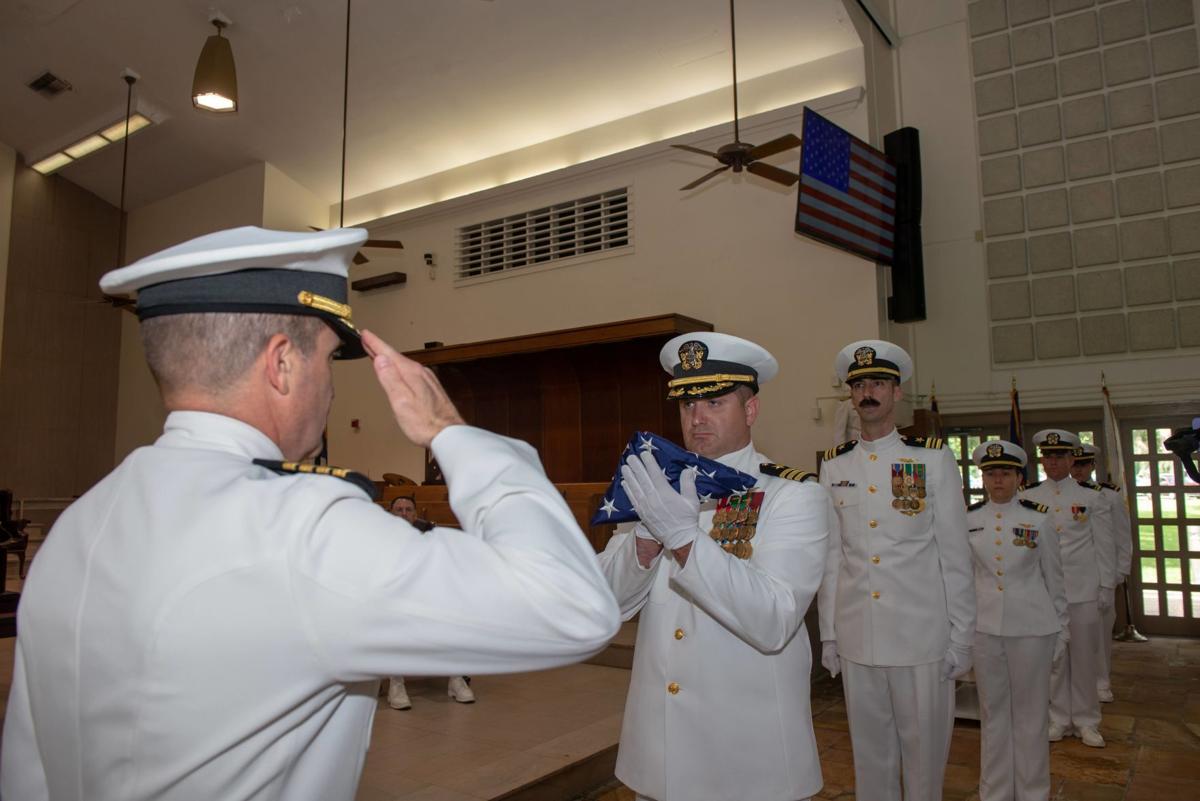 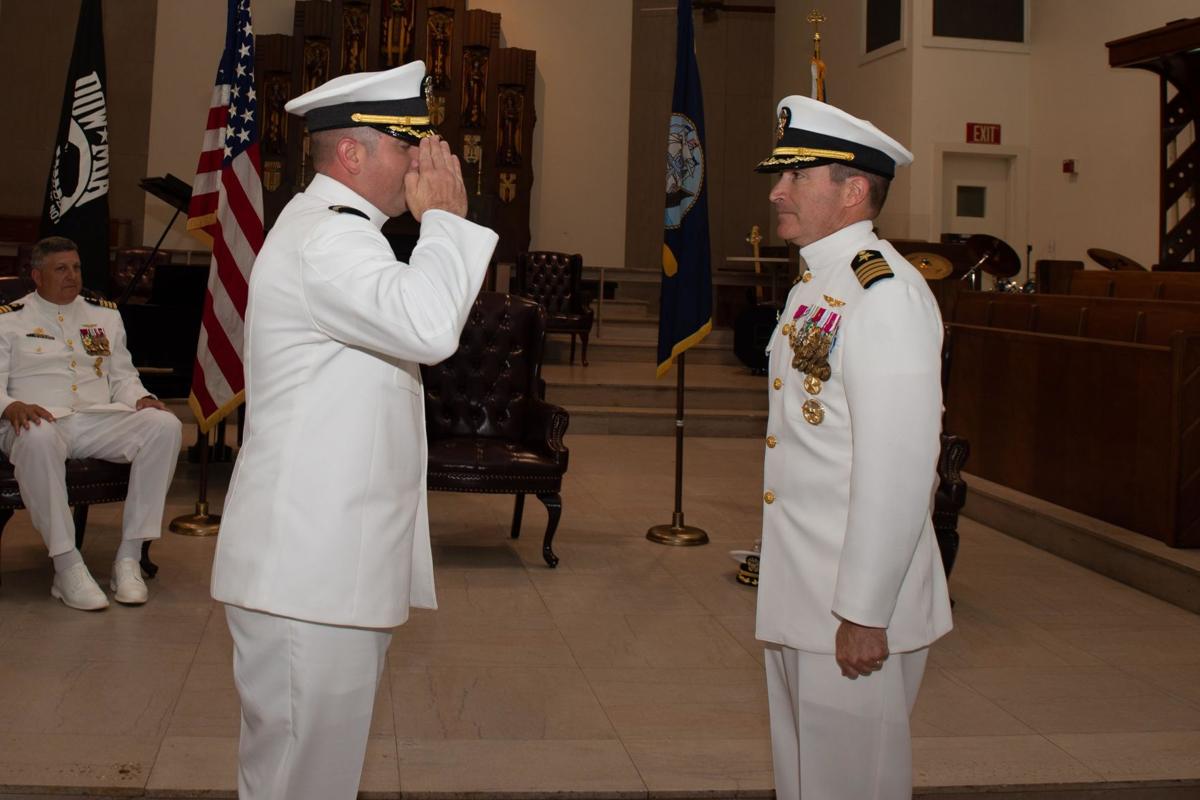 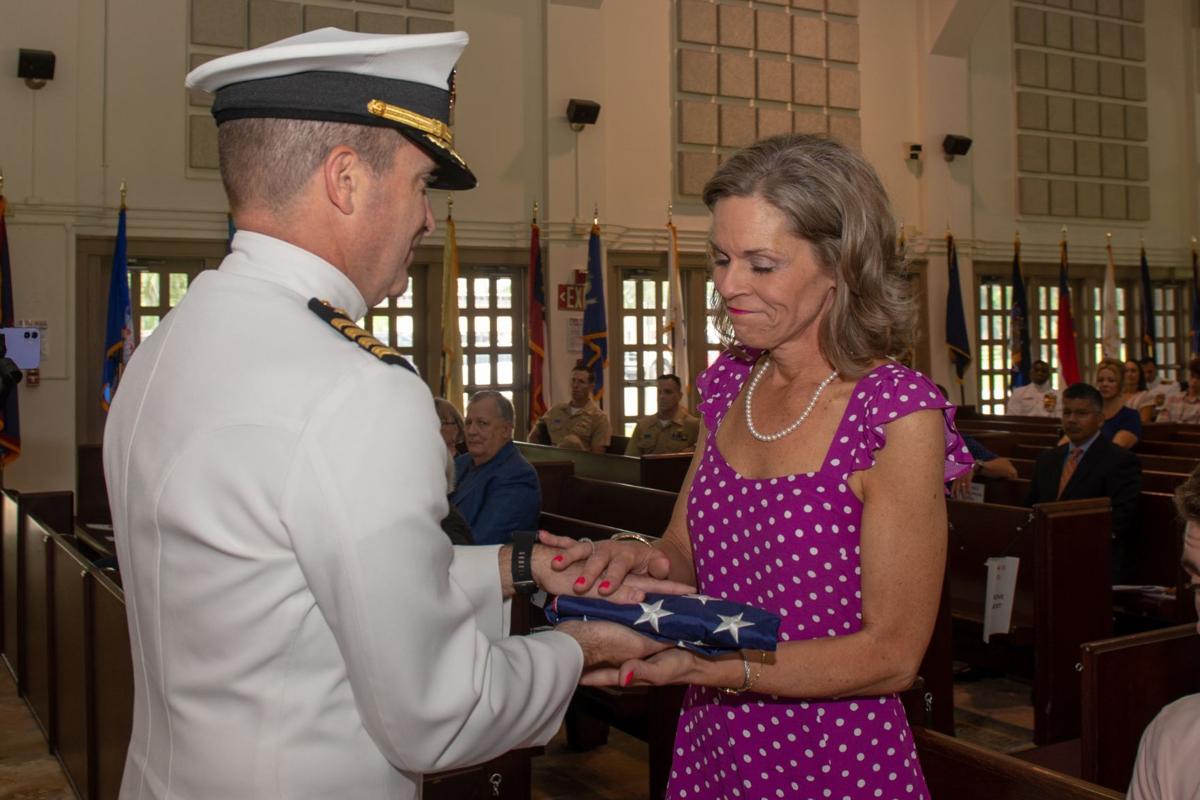 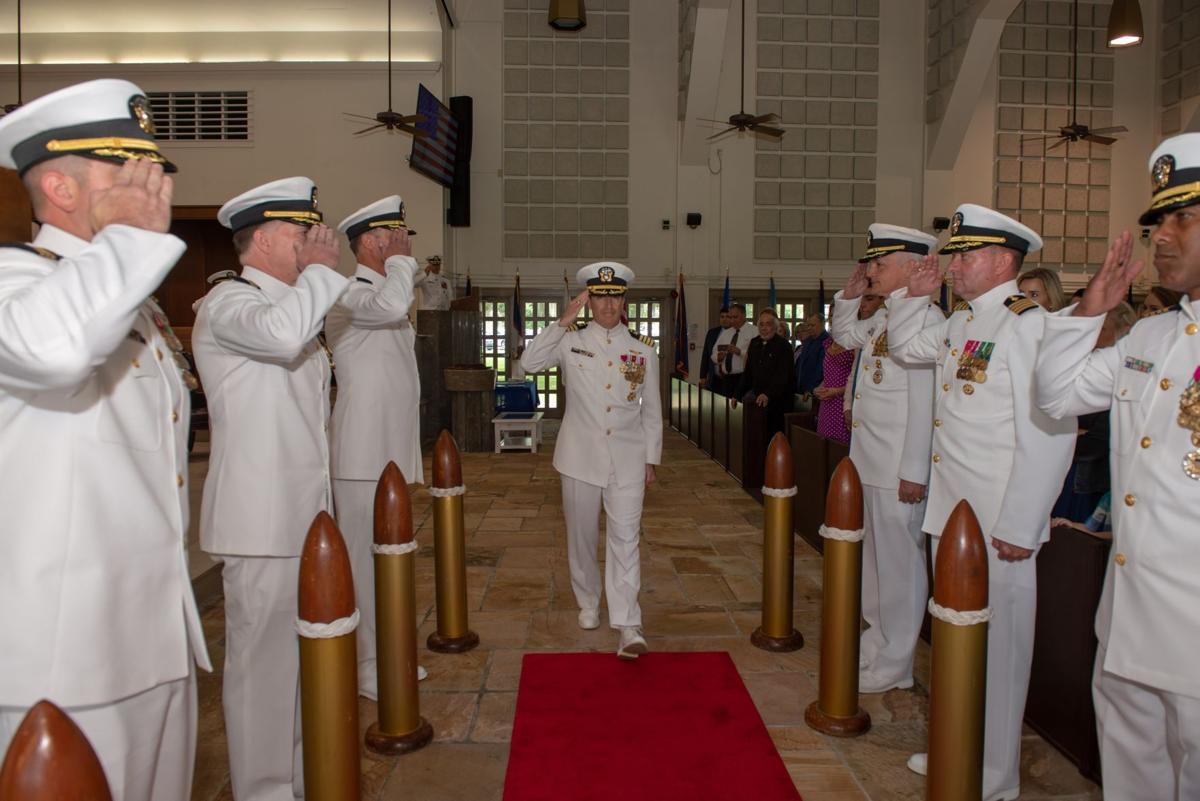 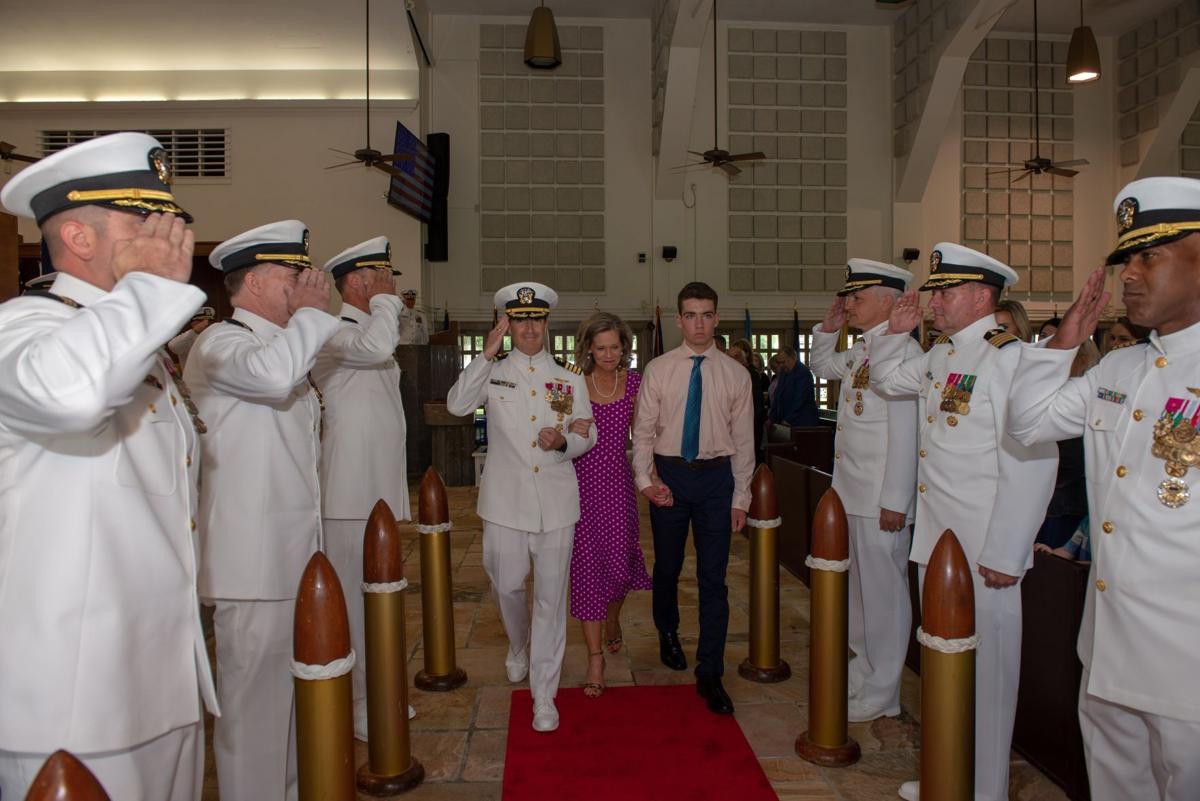 Capt. Anthony Corapi, along with his wife, Jill, and youngest son, Thomas, is piped ashore for the last time at his retirement ceremony last month in Jacksonville, Fla.

Capt. Anthony Corapi, along with his wife, Jill, and youngest son, Thomas, is piped ashore for the last time at his retirement ceremony last month in Jacksonville, Fla.

The Naval Air Station in Jacksonville, Fla., where Corapi flew his first P-3 Orion anti-submarine patrol aircraft, is where he and his family decided to hold his official naval retirement ceremony after 29 years of service.

Before Corapi begins his next chapter at St. Thomas More High School, an array of Navy traditions provided a measure of closure for him and his family.

“For a lot of people who served, me included, you don’t like the attention, you don’t like people sitting and staring at you,” he said. “It’s not just about my service, it’s about my family’s service, because my wife and my kids are serving right alongside me.”

To a reading of the military poem “Old Glory,” five officers of every Naval rank Corapi held, ensign to captain, passed a folded flag until it arrived at Corapi, who presented the flag to his wife, Jill.

The flag was flown last year at The Citadel campus in Charleston, S.C., where he graduated from in 1992.

Then, a closing poem from a junior member and a master chief: “You stand relieved, we now have the watch.”

Hearing what America meant to his dad, an Italian immigrant, infused Corapi with a sense of patriotism. Watching 1976’s Midway, featuring Charlton Heston streaking through Japanese airways, was when a young Corapi first went, “Wow, I want to do that.”

“'Top Gun' was the best recruiting tool that the Navy ever had,” Corapi said. “A generation of naval aviators can trace back to that movie and what it did for them.”

Eight years later, Corapi was flying combat missions for the Navy, enforcing an embargo against the former Yugoslavia.

In his first three-and-a-half years, he’d been deployed to the Mediterranean, Central and South America and Iceland.

“There was a couple of times where I had to step back and go, ‘Wow, it’s really happening. Now, I’m actually doing all the stuff that I’d thought about,’” he said.

As his experience racked up, flying all over the world, his first mentorship opportunities began to appear. In the twilight of his military career, he directed the UI’s Naval ROTC program starting in June 2017.

“You have all this experience, and what they want you to do is impart that on to the next generation because the young men and women that we produce at the U of I and commission through the ROTC program, they’re taking my spot, right? Because I’m at the end of my career, they’re just beginning,” he said.

He helped teach ROTC-specific courses, imbuing naval students with professional core competencies — things like officer duties, sailing, fitness along with the “courage, honor and commitment” Navy motto — before the students are commissioned.

In his last year in the role, though COVID-19 certainly eliminated a few events, the UI’s testing program allowed ROTC to operate with “about 95 percent” of its typical activities.

Ahead of becoming chief operating officer at St. Thomas More, the Navy provided a natural starting point for his transition.

“I was serving my country for 29 years, and now I’m going to serve this school and the Catholic Church working at this school,” he said.

After a winding journey through the Navy and his retirement, was he ready to “give up the watch” and move on?

‘Truly felt like God was leading me in this direction’

Corapi has been a Christian his whole life, but tragedy strengthened the faith of him and his family.

In December, it’ll be eight years since his eldest son, Pete, passed away. The Corapi family turned to God to grapple with the loss.

“When you have something like that happen, you learn very quickly that you’re really only going to have your faith to hang onto,” he said. “You do a lot of asking God, ‘Why, why has this all happened,’ and you don’t normally get answers, or at least the answers that you want.”

Family is Corapi’s greatest joy, and in a way, his greatest hobby. He’d have more pastimes, but he’d rather be spending time at his kids’ ballgames.

“A lot of people ask ‘Do you like golf?’ and I love golf. I’m just terrible at it because I can never commit the time,” he said.

His daughter, Anna, graduated from STM this spring, while his son, Thomas, will be a sophomore at STM this fall, and he’s decidedly chill about his dad becoming an administrator there.

“His quote was, ‘I’m cool with it, Dad,’” Corapi said. “It was just a big nothing burger; I was concerned there would be a little bit of angst.”

Not one to sit around, Corapi’s prospects were “all over the place” during the job search, applying for everything that’d have a chance of sticking in the C-U area. But in the last month-and-a-half, when the STM opportunity first came to his attention, “it truly felt like God was leading me in this direction.”

The Catholic Diocese of Peoria, which oversees six Catholic high schools, has been looking to make school leadership more collaborative, and Corapi’s new position is part of that effort.

He’ll share administrative and leadership tasks with STM’s principal, Sister M. Bridget Martin, who took over for the school in the fall of 2019 and oversaw the school’s in-person operation last academic year.

Sister Martin will focus on traditional duties like academics and faculty, while Corapi will take on a support role, helping with enrollment, advancement, building issues, security, fundraising, athletics and a bit of discipline, too.

“I like to say, we’re all going to be responsible for discipline, it’s not just going to be me,” he said. “They’re good kids at STM. I don’t think I’m going to see a whole lot of issues, but when one arises, we’ll handle it.”

July 1 was his unofficial start date, though he may not be in the physical building while new flooring and carpeting are being put in.

He’s keeping the school’s core mission in mind, making young men and women into disciples of Christ, Corapi has one “ultimate goal” for the school’s future.

“I want STM to be the school of choice in this community,” he said.