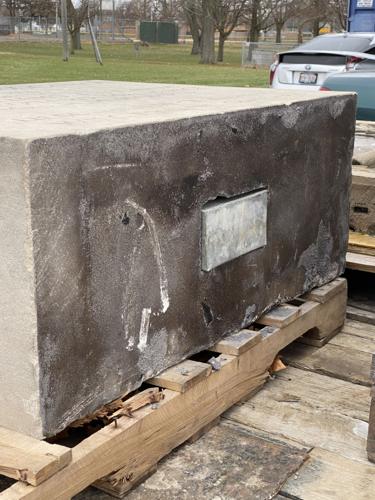 The bottom of the cornerstone of the 1919 Myna Thompson School building that contained a time capsule. 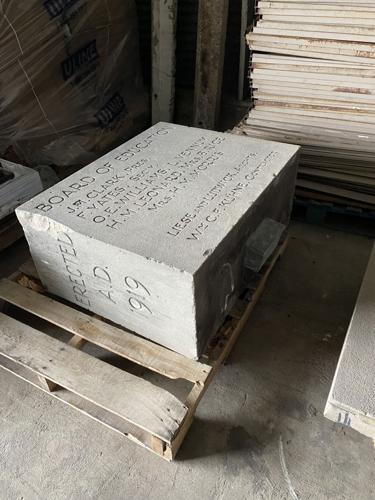 A time capsule is shown hanging out of a hole in the bottom of this 1919 cornerstone from the Myna Thompson School in Rantoul, which was recently removed when the building was demolished. The capsule will be opened at an upcoming Rantoul City Schools board meeting. 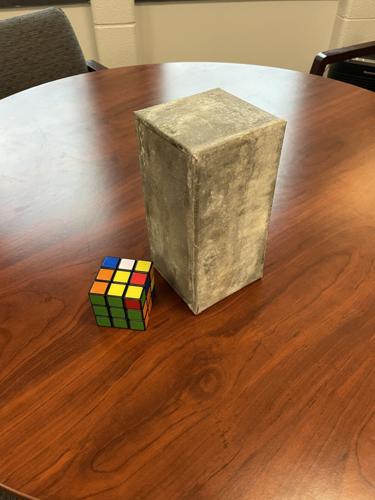 The time capsule found in the cornerstone of the 1919 Myna Thompson School in Rantoul, with a Rubik’s Cube for size reference.

The bottom of the cornerstone of the 1919 Myna Thompson School building that contained a time capsule.

A time capsule is shown hanging out of a hole in the bottom of this 1919 cornerstone from the Myna Thompson School in Rantoul, which was recently removed when the building was demolished. The capsule will be opened at an upcoming Rantoul City Schools board meeting.

The time capsule found in the cornerstone of the 1919 Myna Thompson School in Rantoul, with a Rubik’s Cube for size reference.

RANTOUL — For more than 100 years, a time capsule has rested, undisturbed, in a portion of Rantoul’s oldest school.

It was tucked inside the cornerstone of the Myna Thompson School, engraved with “Erected A.D. 1919” on one side and the names of the board of education, headed by President J.M. Clark, the architects and contractor on another. No one knows what’s inside the welded-shut metal capsule.

All will be revealed prior to the start of the Dec. 16 Rantoul City Schools board meeting when the time capsule will be opened.

A self-proclaimed history nerd, Superintendent Scott Woods knew what was happening in 1919. It was the year after the end of World War I, and the Spanish flu that killed 50 million people raged across the world.

The irony was not lost on Woods.

“For my own amusement,” Woods contacted Rebecca Smith, an epidemiologist from the University of Illinois, about whether there was any danger in opening the time capsule. Epidemiologists are often called “disease detectives.” And as Woods suspected, Smith said there would be no health hazard from opening the capsule.

“My not-very-serious question was, ‘Could it contain the Spanish flu?’ and she said, ‘No,’ and gave me a bunch of information. She assured me we are not going to get the Spanish flu,” Woods said.

“It is extremely unlikely that there would be any ... virus in the time capsule,” Smith said, adding there have been attempts to revive the 1919 virus from people who died and were found in the permafrost of Alaska, and the virus did not survive.

In Illinois, due to the higher temperatures and fluctuation of temperatures, it is even more unlikely for the virus to have survived for more than 100 years, Smith said.

The capsule is made of the same metal, according to Woods, as the front-porch containers that used to hold milk bottles.

He isn’t sure how the capsule will be opened during the meeting. It’s not something that happens every day. Maybe every 100 years or so.

Woods said the time capsule was situated “dead center” in the bottom of the cornerstone.

“It just kind of fell out of the bottom,” he said. “There’s no rust or anything. All along we thought we would find a time capsule, but we were not sure how it would be found. It came out in perfect condition ... 102 years later.”

From the weight of the capsule, Woods figures it contains documents. He said he will scan all of the documents and make them publicly available. The board meeting is also open to the public.

“We don’t expect there is anyone still alive (from) when it was placed there,” he said. “They would have been school age. That puts them at least 6 to 7 years old in 1919. But maybe some relatives are alive.”

Woods said the time capsule has sparked a great deal of interest from people who attended Myna Thompson or worked there.

He said he has also been told another time capsule was buried somewhere on the property, probably in the mid-’70s, although why it was done then and exactly where it was buried are not known.

One person told Woods he remembers placing a transistor radio in that capsule.

The site was originally the site of another school that burned down in 1919. It was at that time that separate high school and elementary school districts were established.

Construction of the recently demolished structure was begun that year and finished in 1921.

It was a time of change in Rantoul. Chanute Air Field opened in 1917.

Six rooms were added to the school in 1957, Woods said. It was closed as an elementary school in 1977 but held several uses until recent years.

“For a long time, it was the regional office of education,” Woods said, “and then it also housed some special-education and alternative programs in there. I would say it was used more as a county-wide site after 1977.”

Cleanup of the rubble continues. Once finished, it will be regraded and become the property of high school district. The high school sits just east, across Sheldon Street, from the old elementary school.