Two-thirds of that will go to Owen, and a third will go toward his attorney, Ron Langacker, according to the settlement, which The News-Gazette received Tuesday after filing an open records request.

The payments will be made by the district's insurance carrier.

Under the settlement, Owen agreed to drop the lawsuit, and the district didn't admit any liability.

The two sides also agreed not to disparage each other, and Owen agreed not to seek future employment or volunteer opportunities with the district. 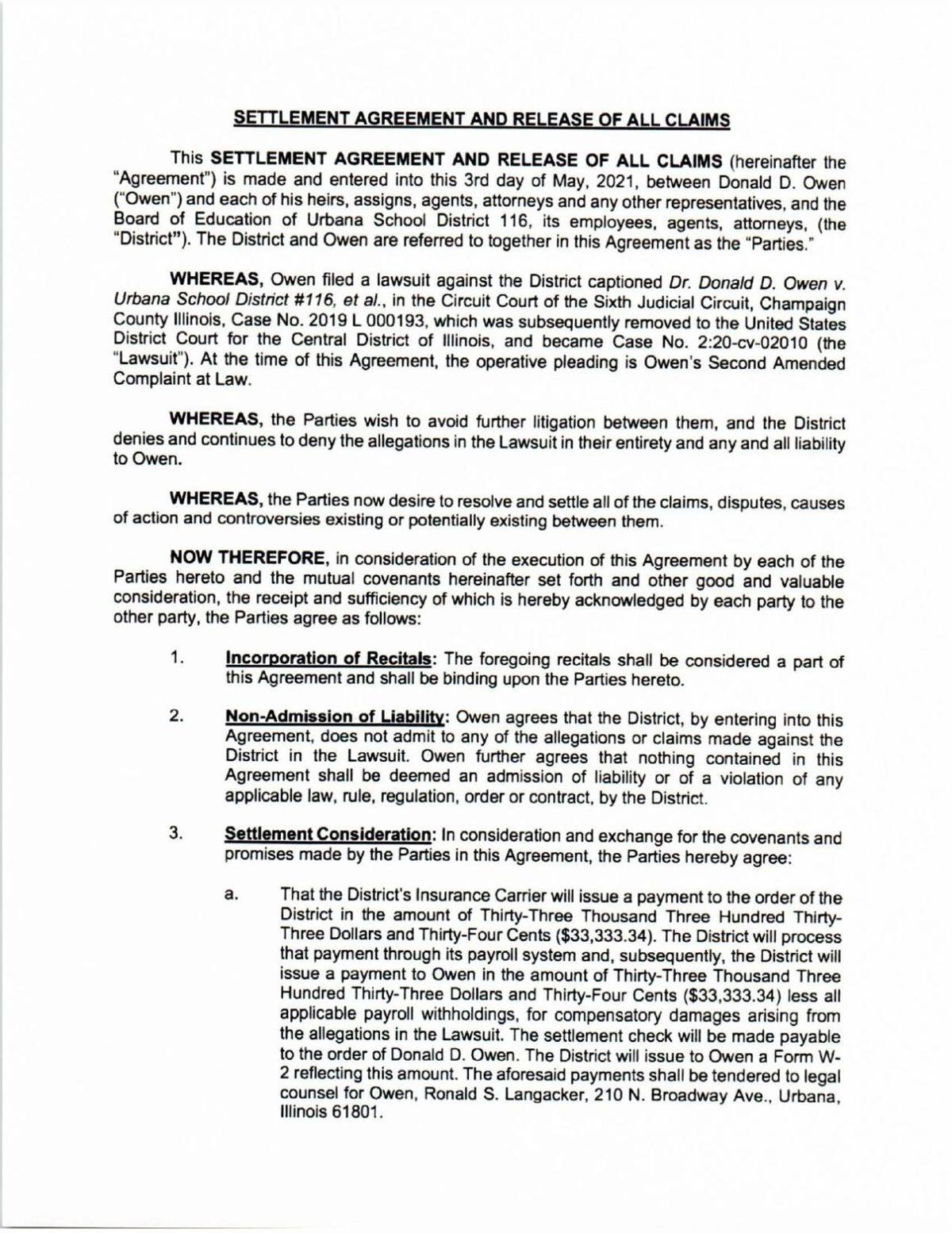 URBANA — The Urbana school district has reached a settlement with its former superintendent, who sued his former employer for alleged retaliation when it didn’t renew his contract.

In his 2019 lawsuit, Don Owen accused the board of firing him for questioning an audit ordered by the board of the hiring of several minority faculty and staff members.

The board held a special meeting Monday to authorize a settlement with a “former district employee.”

“My goal as superintendent of Urbana School District 116 was to create a challenging and supportive educational environment for all students. I am proud of the bold actions we took to increase opportunities for students,” Owen said in a statement released by his attorney, Ron Langacker.

“I am grateful that we have reached a legal resolution to the civil lawsuit that I filed against the Board of Education in 2019,” Owen added.

Details of the settlement were not disclosed.

“The Board has denied and continues to deny any and all allegations of wrongdoing claimed by Dr. Owen,” the school board said in its own statement. “However, the board takes very seriously its role as the steward of the taxpayers’ money and is keenly aware of the significant costs and expenses in defending Dr. Owen’s lawsuit.”

The board said it agreed to mediation and reached a settlement after consulting with its attorneys and its insurance carrier.

The news release did not include the size of the settlement, but the board “ultimately decided it could not justify the continued use of public funds and administrative time on this lawsuit.”

Both sides said the terms of the settlement prevented them from commenting further.

The lawsuit stemmed from a “Recruitment and Retention Committee” Owen and other employees formed in 2017 to hire more minority teachers and staff, in response to data suggesting that minority students were being punished more frequently and harshly and that there was a racial disparity between the student body and faculty.

In March 2018, the administration also rolled out a district-wide implementation of restorative- justice practices, which included getting rid of deans at the middle and high schools.

Owen’s committee’s hirings sparked complaints from district staff and union members that Owen and his colleagues were engaging in “top-down management” and violating hiring policies.

The union maintained that it was not opposed to the restorative-justice practices but rather the district’s failure to address the needs of all students.

Without consulting Owen, the school board then ordered a “hiring practices audit” of the new staff members, who were all African, Latino and Asian American.

In the suit, Owen said when he learned of the audit, he expressed concern to the board in a Sept. 24, 2018, closed session that it was targeting minority employees, which could have legal consequences for the district.

Owen alleged that John Dimit, then president of the board, said in the meeting that while the district was publicly calling the records review an “audit,” in Dimit’s mind, it was an “investigation of specific individuals.”

About two months after that meeting, Owen was placed on administrative leave until his contract ended June 30, 2019.

And in February 2019, the board let Owen know his contract would not be renewed.