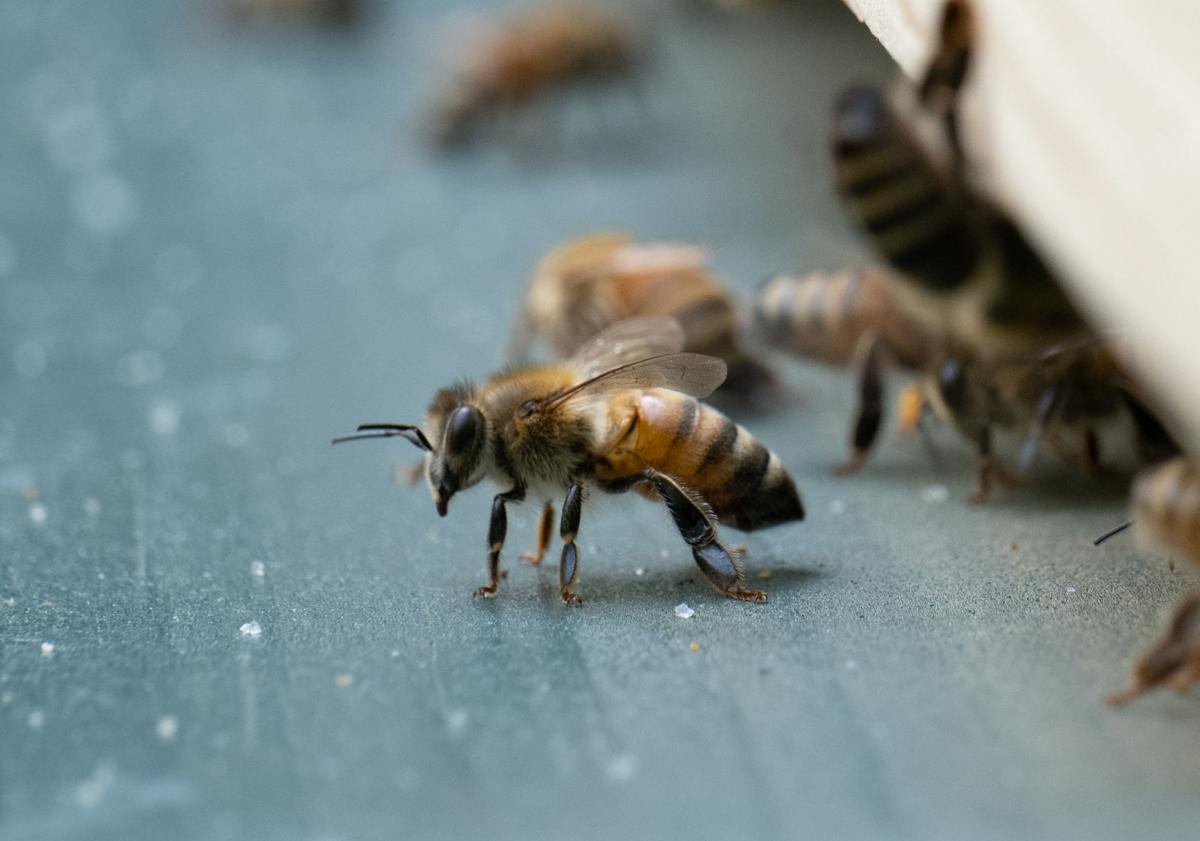 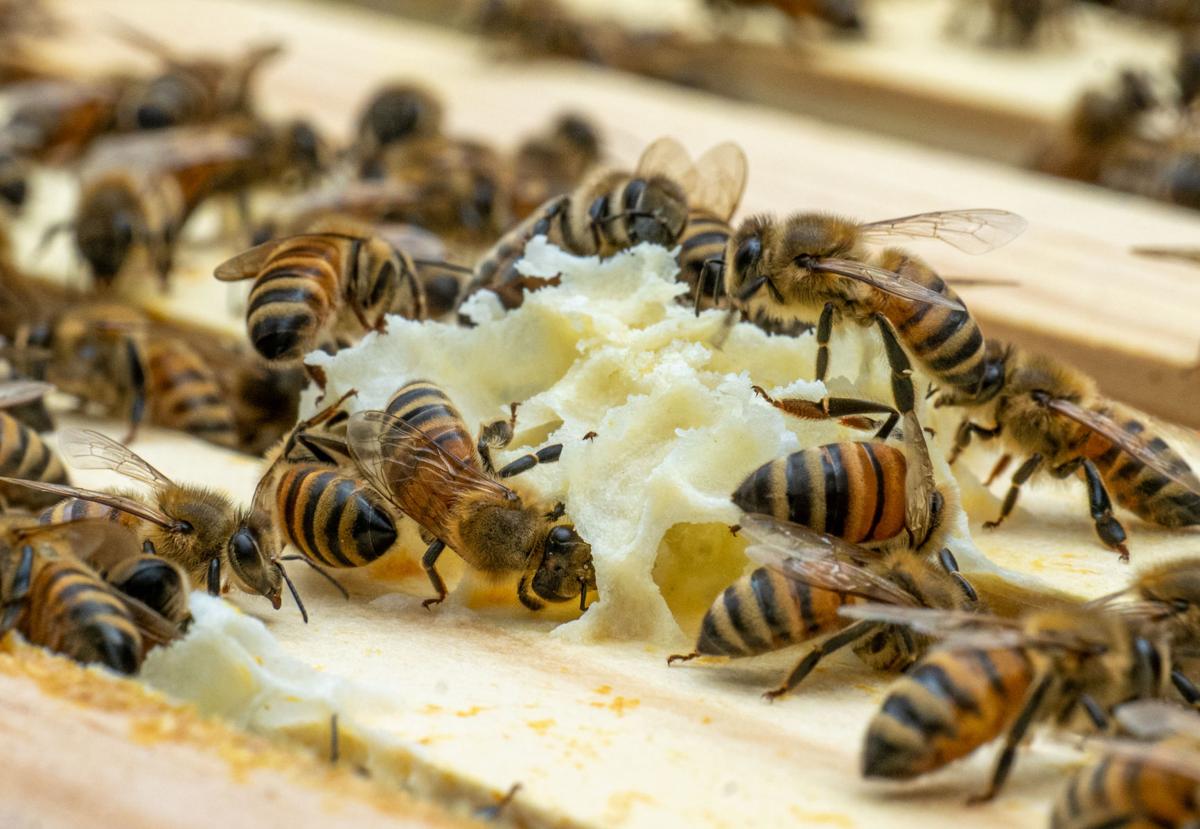 Bees crawl on the honeycomb they built in hives kept by University of Illinois Professor Charles ‘Stretch’ Ledford just west of Champaign. 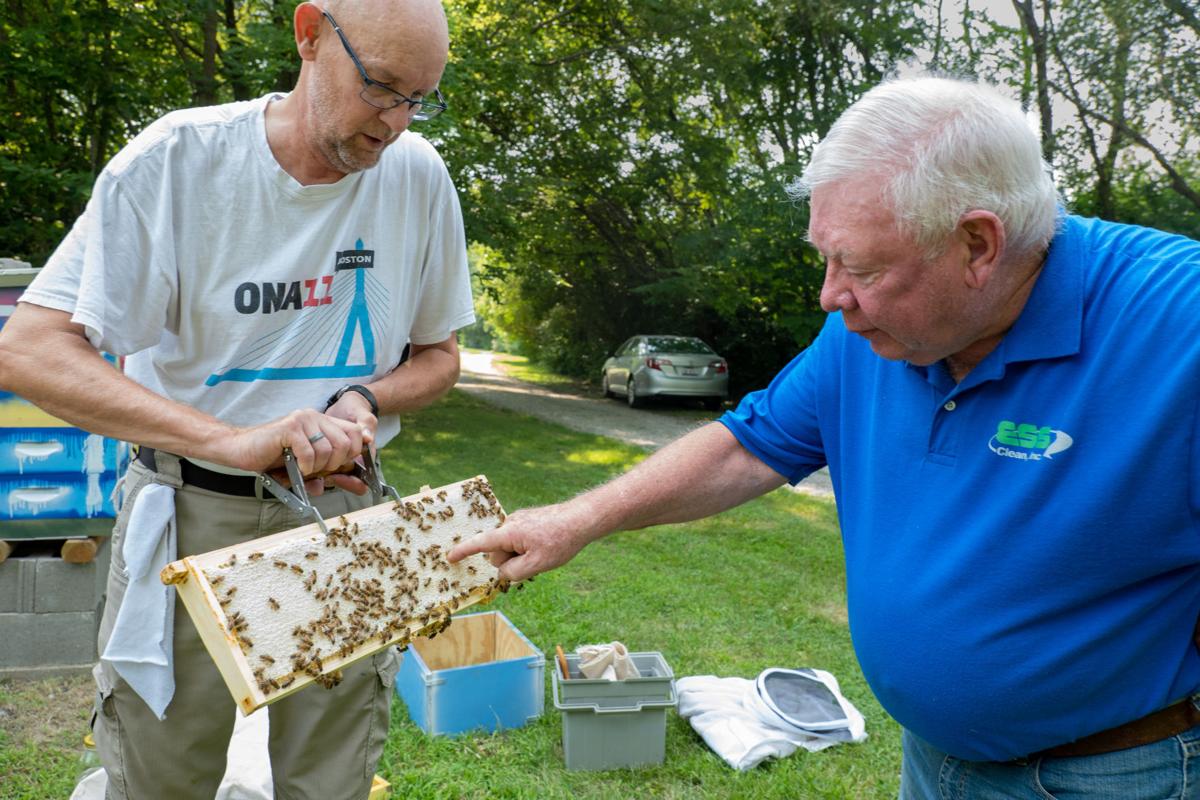 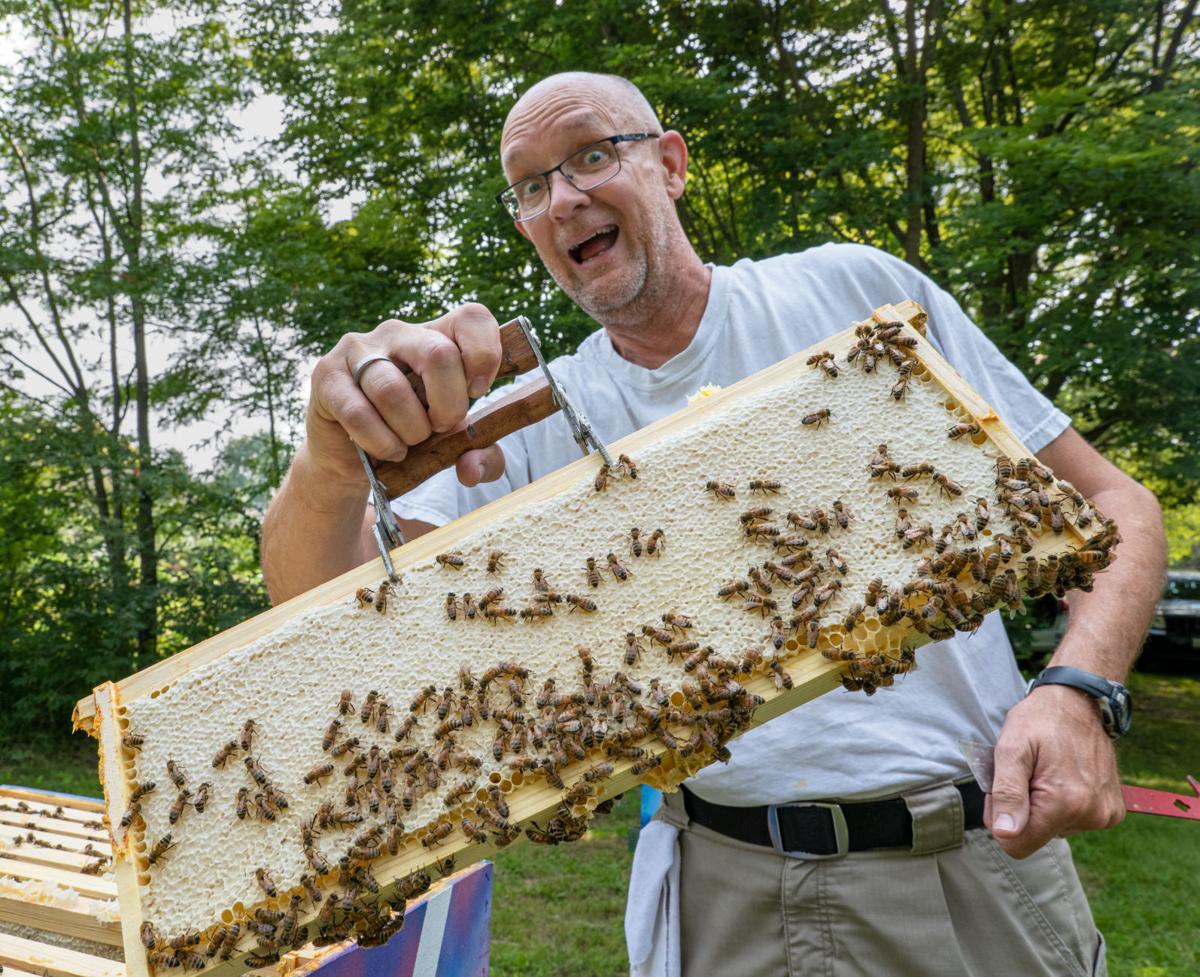 UI professor Charles “Stretch” Ledford pulls out a section of the beehive he maintains. 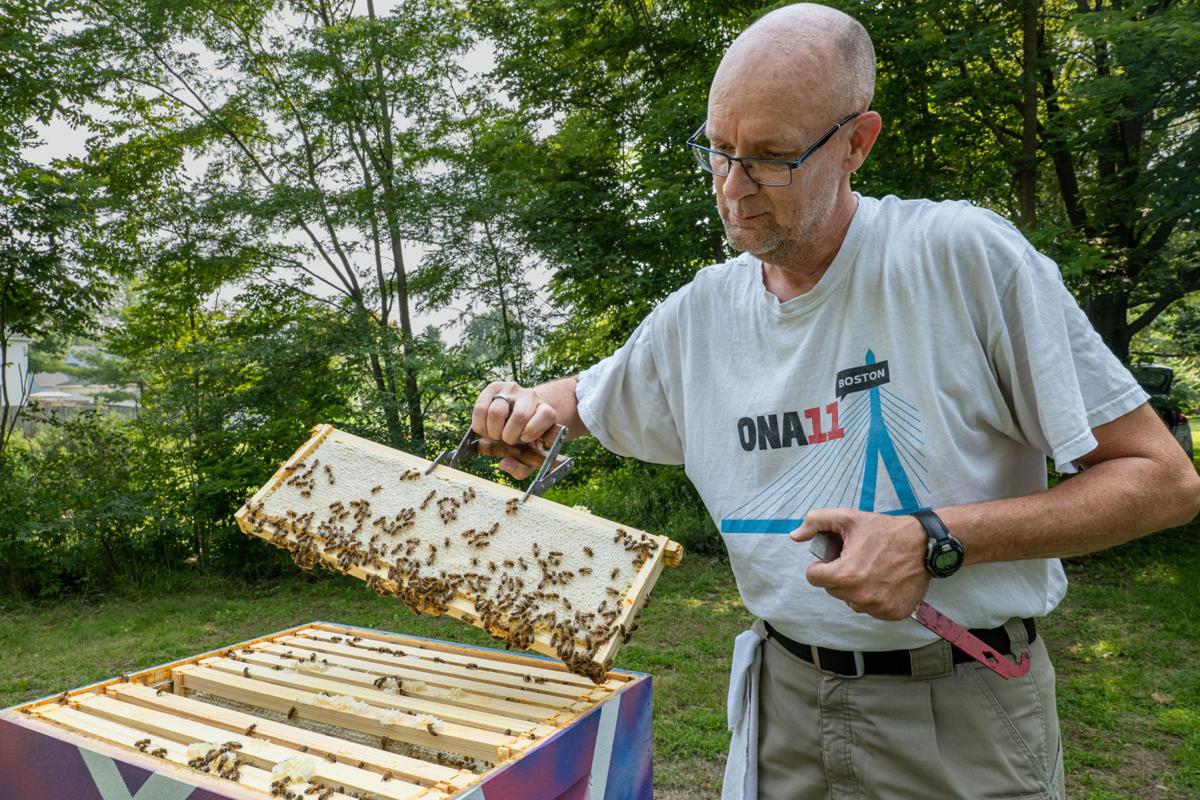 Bees crawl on the honeycomb they built in hives kept by University of Illinois Professor Charles ‘Stretch’ Ledford just west of Champaign.

UI professor Charles “Stretch” Ledford pulls out a section of the beehive he maintains.

CHAMPAIGN — Honeybees — way too many of them to count — fly around Charles “Stretch” Ledford’s five beehives nestled in a clearing along a stream just west of Champaign.

A University of Illinois College of Media professor, Ledford said he first got interested in beekeeping at a photo shoot in 1999.

He got stung back then, but was nonetheless fascinated by what he saw. He now has, in addition to the five hives west of Champaign, three others just south of Urbana.

What’s not so cool for him are proposed amendments in Champaign County’s zoning and nuisance ordinances that would impact some local beekeepers.

Ledford and many others are poised to speak before the county’s Zoning Board of Appeals tonight about the proposed new requirements, some of which include placing a limit on beehives per lot in residentially zoned unincorporated areas of the county and requiring fencing around the hives.

The rules would apply only to beehives in the county’s residential zoning areas and wouldn’t impact hives in agricultural or other zoning categories, said County Zoning Administrator John Hall.

Hall said tonight’s session on beekeeping regulations will likely be followed up with at least one more before the zoning board, and it would be at least October before the issue could land before the full county board.

“We think it’s going to be at the ZBA for two or three meetings at least, given the amount of people who want to talk,” he said.

Lined up against hobbyist beekeepers and others with an avid interest in seeing honeybees thrive are some county residents with a list of grievances about living near beehives.

Such as: kids and grandkids getting stung; bee feces on their homes and vehicles; bees swarming around swimming pools, bird baths, hummingbird feeders and dog water bowls; and outdoor gatherings being disrupted.

“We have been told by the beekeeper how to dress, how to bathe and what lotions we should not wear and not to wear cologne,” said a letter attached to a petition signed by residents of the Prairieview Subdivision and Mary Lou Drive at the northeast edge of Urbana.

Hall said a dispute between beekeepers and neighbors dates to 2018 and came back in 2020 before the county board’s Environment and Land Use committee, which declined to forward it to the full board for action. The same committee heard complaints from Prairieview neighbors again this April.

What’s being proposed now is an attempt to minimize the incompatibilities and still allow for a minimal amount of beekeeping in residential areas, Hall said.

While that would appear to impact Ledford, who keeps his hives on two host properties because his own yard is too small, it needn’t, Hall said. The ordinance would treat beekeeping in residential areas as a home occupation and allow for one non-resident employee, which could be the beekeeper, though the paperwork would need to be in the name of the host resident.

Also proposed is limiting beehives on lots up to 10,000 square feet to three, plus one nucleus (smaller) colony per authorized hive. One more hive and nucleus colony would be allowed for each additional 10,000 square feet.

Regulations also would call for beehives to be at least 30 feet from streets, at least 10 feet from other property lot lines and at least 30 feet from neighboring homes and some other structures on adjacent lots such as patios and pools. Plus, beekeepers would be required to place a 4-foot-high fence or wall with a self-latching gate around any beehive or nucleus colony on lots 40,000 square feet or less. And for any hives less than 16 feet from a lot line, there would have to be a 6-foot-high flyway barrier.

Ledford said the fencing requirement alone would be cost prohibitive for him, and he contended that the proposed regulations are “government overreach.”

“This ordinance is using a sledgehammer to swat away a few honeybees,” he said.

Marc Roderic said he became a willing host for some of Ledford’s beehives at his home on West Kirby Avenue just outside Champaign city limits, because bees are important to agriculture. They don’t pose any nuisance, he said, and he can even mow around the hives.

Prairieview Subdivision resident Derald Seeds and his family have had a different experience. He said his kids and grandchildren have been stung by bees from a neighbor’s hives and there has been bee manure all over the house, cars and boats.

“When you see your grandkids get stung, you get mad,” he said.

He and his family have been in this subdivision for 40 years, Seeds said, and his neighbors have had similar problems in recent years.

“I understand everybody needs bees,” he said. “We need them to pollinate, but not in a residential area.”

Seeds’ beekeeping neighbor Rena Wilson-Jones said she has 40 beehives but has moved them to several other locations in the county, all in agricultural zoning.

She got into beekeeping originally to do her part for honeybees, she said.

“My primary objective was just to raise healthy honeybees, because I knew several years ago we were in serious need of raising them,” she said.

The proposed regulations stand to make it more difficult and potentially unaffordable for people to start or continue being beekeepers, she and Ledford contended.

“Bees are responsible for pollinating a third of our food,” Wilson-Jones said. “That’s significant.”

And honeybees need beekeepers’ help, she said, because they’re being affected by farm chemicals, disease and a lack of forage.

Since Wilson-Jones has relocated her beehives, Hall said issues neighbors had with her honeybees have ended. If neighbors are still experiencing bee issues, he said, it may be from bees flying into their neighborhood from nearby agricultural areas because they’re attracted to bodies of water, such as swimming pools.

“The local beekeepers say we are going to kill beekeeping,” Hall said. “That’s not our intent. We don’t think it’s going to do that.”

The county zoning board is set to meet at 6:30 tonight at the Brookens Administrative Center, 1776 E. Washington St., U.