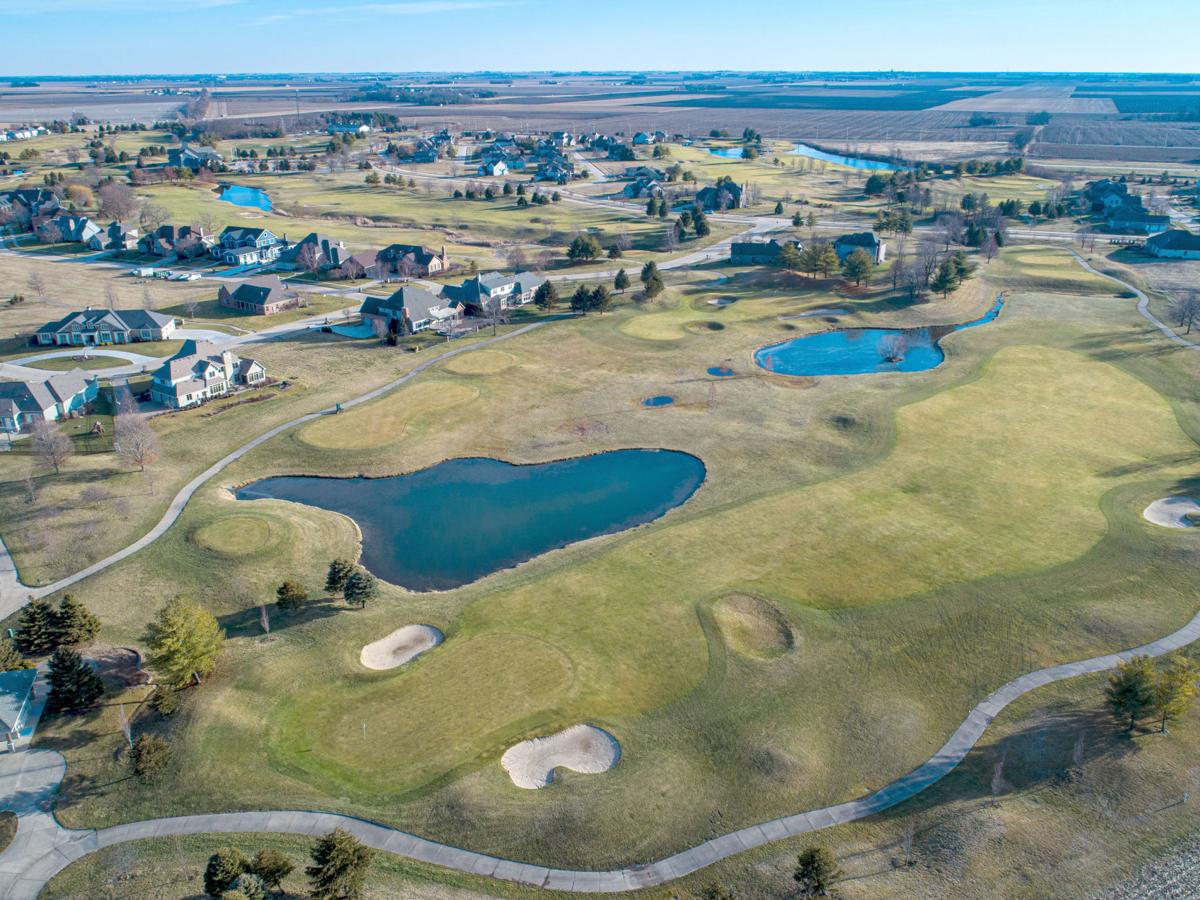 Around March 2020, 'transition vegetation' could be planted throughout the former Stone Creek Golf Course to begin its conversion to green space. 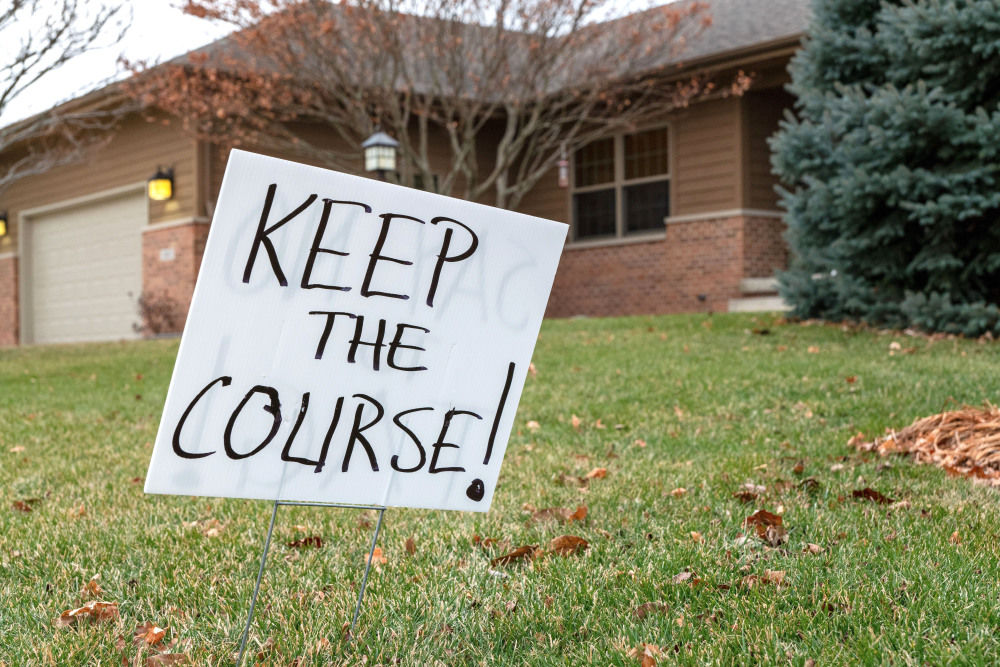 Signs that say 'Keep the Course,' 'Say No to TAG (The Atkins Group),' and 'Protect Your Property $' sit in the front yard of Rod Fletcher's home in the Stone Creek subdivision in Urbana.

Around March 2020, 'transition vegetation' could be planted throughout the former Stone Creek Golf Course to begin its conversion to green space.

Signs that say 'Keep the Course,' 'Say No to TAG (The Atkins Group),' and 'Protect Your Property $' sit in the front yard of Rod Fletcher's home in the Stone Creek subdivision in Urbana.

URBANA — Steve Apfelbaum heard the complaints from the neighbors of the former Decatur Lake Golf Course in Brodhead, Wis., when it closed down last year, suffering the same fate as 18 other struggling courses.

After buying the land with a few partners, Apfelbaum had big plans. His group would create an ecological reserve, as Apfelbaum’s company, Applied Ecological Services, has done to golf courses and open spaces across the country. They’d plant local plants and grasses to form landscape made up of prairie and savanna.

In the meantime, last year, they planted fields of sunflowers as a transitional crop to prepare the soil for its new use.

“What we learned is that there was considerable angst and anger and uncertainty and mythology by the landowners in the homes, initially concerned about the myth of home values declining,” said Apfelbaum, who received a master’s degree in ecology from the University of Illinois in 1978. “We also learned that, of all the homeowners, a very small percentage of them are actually golfers, but those golfers were very, very upset by losing their golf course, even though there are four or five other courses within a 45-minute drive.”

So Apfelbaum invited residents to the former course for open houses. They held pig roasts, banquets and other meetings to show off their master plan and refer residents to other housing developments with similar reserves that Applied Ecological Services has built on.

That includes Prairie Crossing, a neighborhood that has received wide national acclaim and attention during its 30 years as what its website calls a “conservation community.”

He also showed them the fields of beautiful sunflowers planted on the former golf course, now known as Three Waters Reserve.

“Boy, did that open people up to think differently about that golf course, even the adamant golfers,” Apfelbaum said. “We stopped hearing about angst. We started to hear about enthusiasm for the flowers and the wonderful birds and butterflies that showed up.

“And that seemed to be a major turning point in that project as far as the experience we were having with the people that were concerned prior to that.”

Resident Alexander Stolyar walked along Stone Creek Golf Course in Urbana on Wednesday, bundled up on a cold day. Stolyar doesn’t golf, but he’s disappointed by The Atkins Group’s recent announcement that it’ll close the course, which is surrounded by a large subdivision of the same name.

“If things would stay as they are, I would prefer it,” he said. “We need to see the plans. We need to see what they come up with. ... We don’t play golf, so it’s not like we moved here because we like to play. But we do like a nicely maintained green space around. I doubt it will be as well-maintained if it’s just a park.”

Homeowners across the neighborhood have similar concerns, whether they golf or not.

Rod Fletcher pounded signs into his front yard that read “Keep the Course,” “Say No to Atkins” and “Protect Your Property $.” Fletcher golfs at the course regularly. His was one of the first houses built in the neighborhood, and he moved there 17 years ago partially because of the course.

“There’s a lot of upset people,” he said. “I just hope The Atkins Group puts in some due diligence and moves forward." He said a park or wildlife reserve "is not attractive to me.”

Nina and Al Heckman’s floor-to-ceiling windows on the back wall of their home look out onto the course.

Neither of them golf, but they’re hoping to sell in four to five years to move into a retirement community. They’re worried that their home values will plummet.

Like Apfelbaum, Realtors in the area don’t seem to think home values will drop.

Jilyan Landon of Ryan Dallas Real Estate says that a different use of the land will attract a wider spectrum of homebuyers.

“I think with any subdivision that’s centered on one major feature, like a golf course, or even a specific property that’s centered around a specific feature, like a swimming pool, the buyer pool for a property like that might be more narrow and less mainstream,” she said. “People are very receptive to the idea of living in a parklike setting or having that green space around them, which a golf course offers obviously.

“But with it being general green space that anybody can potentially use, that’s going to broaden the appeal, and people are really drawn to that. And so that’s why this might be exactly what Stone Creek needs.”

A majority of the neighborhood’s empty lots, which are numerous, are owned by The Atkins Group.

Still, Fletcher is unconvinced and remains hopeful that the golf course can somehow remain in business.

“Losing the course is certainly a big loss in terms of property value,” he said. “Hopefully, someone can step in and take over (the golf course).”

The Atkins Group, which declined to speak for this story, began sending out weekly emails in the two weeks after announcing the course’s closure.

In its original statement posted on the website, the group laid out vague plans to “provide more natural green open space, walking trails and other community benefits,” but in an effort to assuage homeowners’ concerns, the emails were more detailed.

In them, they presented a loose plan and announced that they were engaging with Applied Ecological Services, Apfelbaum’s company. They laid out a rough schedule for developing a master plan, the planting of “transition vegetation” this March through June and “final planting for successful sustainability” next February and March.

While he wouldn’t talk about Stone Creek specifically because the project is in its preliminary stages, Apfelbaum said his company has worked on around 30 golf course conversions. In addition to Three Waters Reserve, two other golf course projects are in the process.

“What we’ve learned about working with golf course communities without golf courses is that the premiums and the values of the houses don’t go down,” he said. “In fact, the permanently protected open space, especially with these nature attributes that we’re talking about, actually has higher value than golf courses, where there’s no certainty on the future of whether the golf course will remain a golf course.”

Apfelbaum said the land used for these projects is legally protected with conservation easements. They’re generally maintained, he said, with endowment funds that are “professionally managed by money managers to generate the revenue needed to finance the perpetual management and maintenance of these landscapes.”

The benefits, he says, are numerous.

At the former golf course where Three Waters Reserve now sits, 34,000 pounds of fertilizer were used each year. Fertilizer damages the environment in multiple ways, Apfelbaum said, including the inducement of increased carbon dioxide emissions from the soil and water pollution.

“The water quality downstream in the river is definitely measurably improving,” he said of Three Waters Reserve. “There’s all kinds of wildlife coming along. You can’t believe the amount of people that come out to watch birds and butterflies and walk the trails. There’s human health benefits walking the trails.

“There’s family events. People just come out and put a blanket down and have a picnic. High school graduates come out and do their high school graduation photos. It’s so intriguing how the community that never participated with the land when it was a golf course, because they don’t golf, and now everybody’s got access to this beautiful landscape.”

On a recent trip to Urbana, Apfelbaum spotted a few red foxes and mink. Those species, along with birds, butterflies and other animals and insects, will slowly begin to inhabit the former golf course if and when the plan takes place.

A conservancy wouldn’t solve one of Fletcher’s main concerns — the lack of the ability to golf in his neighborhood.

But instead of a fairway, the Heckmans’ back windows will look out onto a native prairie. Instead of a golf cart track, Stolyar will walk on a trail designed for that activity, passing by native animals and birds as he goes.

And concerns about the “mythology” of home values and golf courses, if it plays out similarly to Apfelbaum’s other projects, will melt away. Residents simply need time to come around on projects like this, he said. And usually, they do — even the golfers like Fletcher.

“There are so many pluses,” he said. “All we hear from (people who live on the conservancies his company has worked on) is how much they appreciate the change. It’s a different perspective and a healthier landscape, and a very interesting, new relationship between people that had a lot of pride living on a golf course, and now they have a lot of pride helping out with this conservation park.

“It’s so exciting to see the shift.”