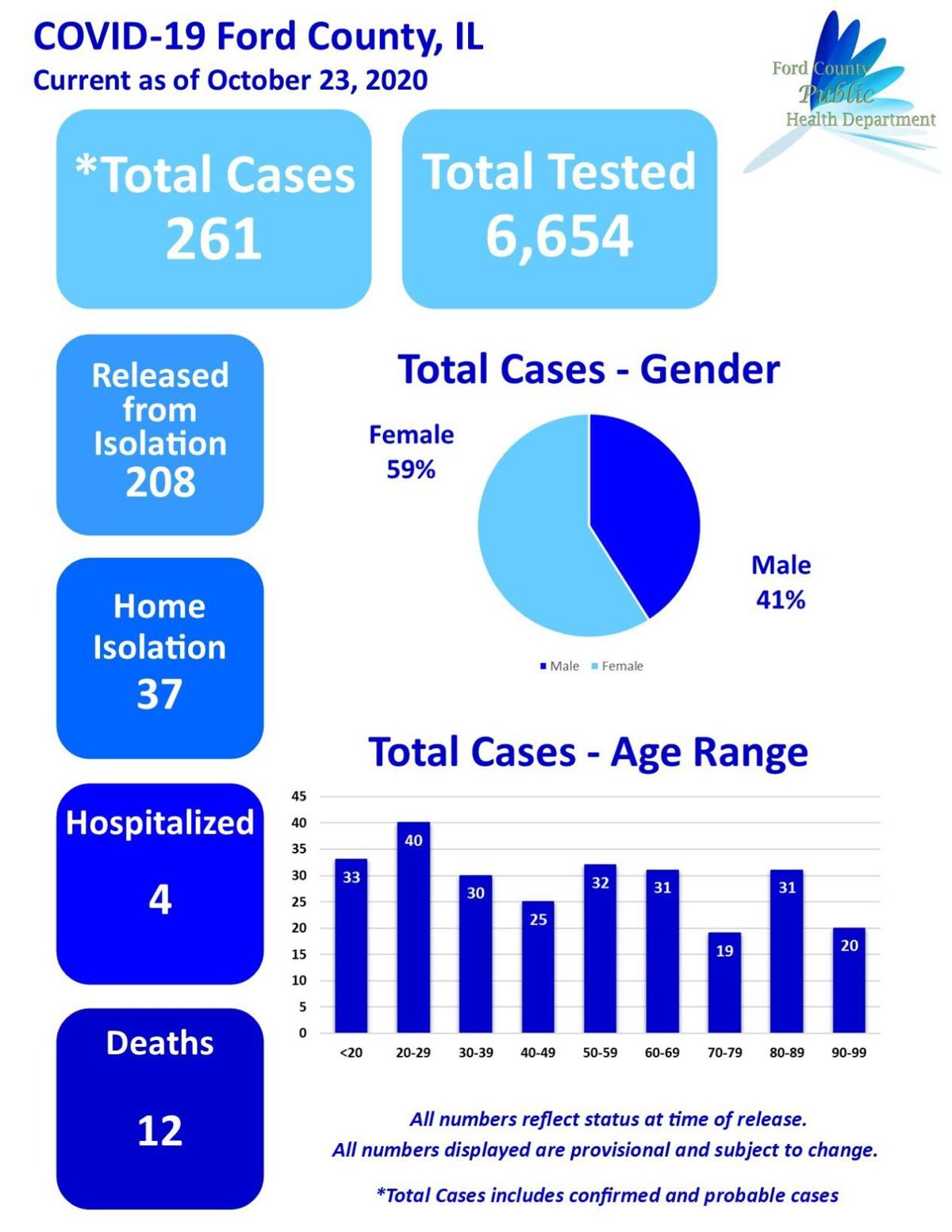 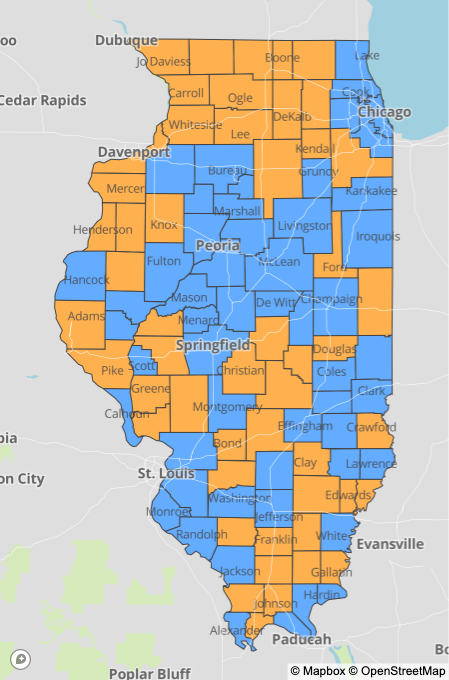 Counties shaded in orange were among those tagged with coronavirus warning level status Friday by the Illinois Department of Public Health. 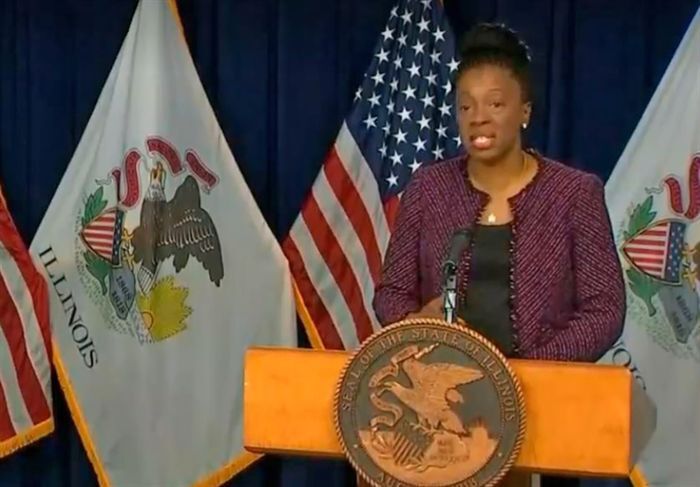 IDPH Director Dr. Ngozi Ezike addresses reporters about the spread of COVID-19 at a news conference Friday in Chicago. Through tears, she called for widespread use of face coverings after warning of increasing COVID-19 hospitalization numbers that could surpass the peaks of March and April. 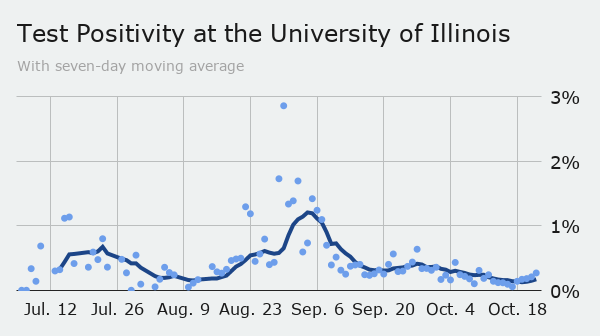 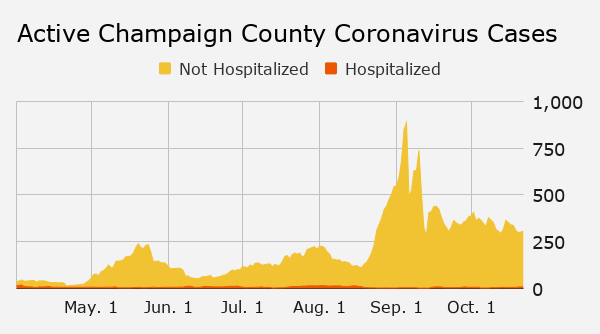 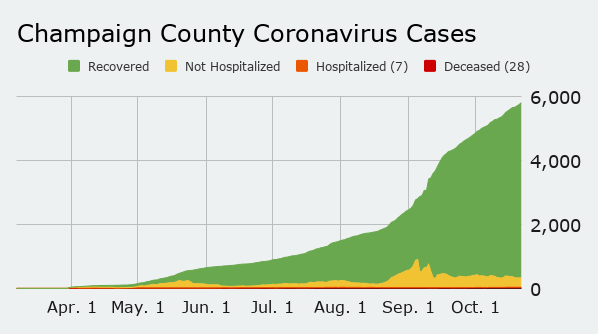 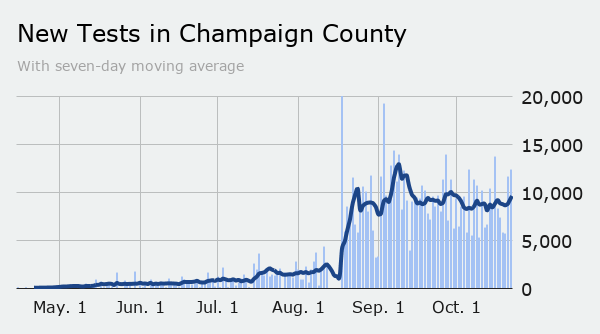 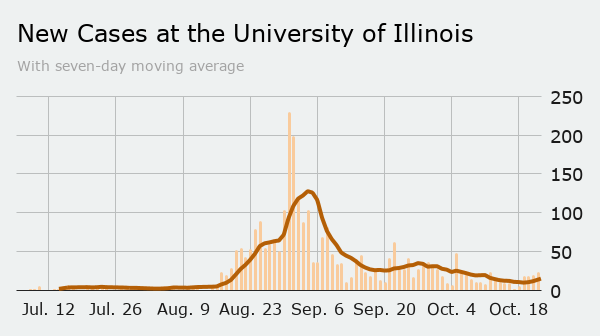 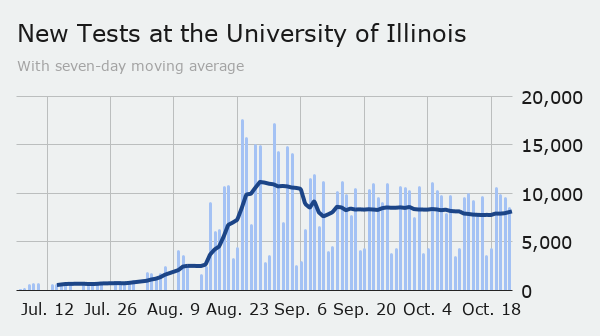 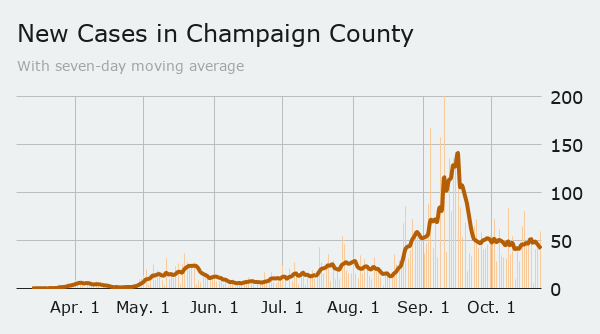 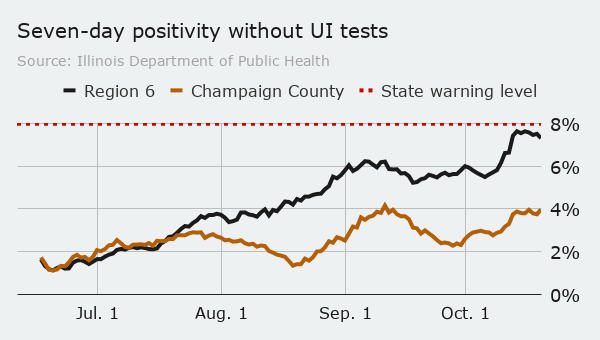 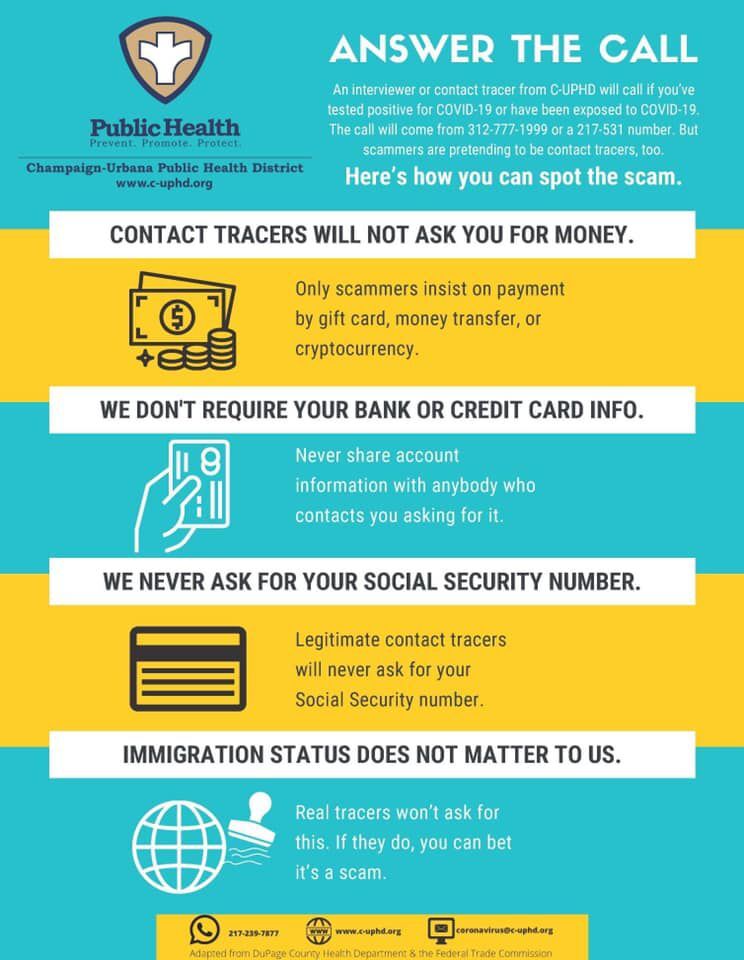 In hope of improving public participation in its case investigation and contact tracing efforts, the Champaign-Urbana Public Health District is distributing this graphic. In a Wednesday announcement, local health officials wrote: "Residents who test positive for COVID-19 or are identified as a close contact to a positive case will receive a call from 312-777-1999 or a 217-531 phone number. If a call from either number is missed, individuals are able to call it back and be routed to a case investigation/contact tracing specialist."

The number of confirmed cases in Vermilion County rose by 63 Friday while the COVID death toll added a 12th resident.

“We are saddened to report another COVID-related death — a woman in her 60s,” county health Administrator Doug Toole wrote in an email. “Our thoughts and prayers go out to her family and friends, and to all those who have been impacted by this disease.”

Of 204 active cases, 12 Vermilion residents are hospitalized with the coronavirus.

The new cases range in age from toddler to a resident in their 80s:

Meanwhile, Vermilion County remained on the state’s coronavirus warning level list for a third straight week. It was joined by Douglas, Ford (one new case, four hospitalizations reported Friday) and 48 other counties, exactly half of the 102 in Illinois.

Some common factors responsible for counties reaching the warning level include gatherings in private homes, weddings, funerals, bars and clubs, university and college parties, college sports teams, institutional settings such as long-term care facilities, schools and correctional centers, plus community spread, especially among people in their 20s, according to public health.

A person in their 90s became the 10th Douglas County resident to lose their life to COVID-19, local health officials announced Friday.

“Unfortunately, we must announce their passing due to health complications caused by COVID-19,” the Douglas County Health Department wrote in an announcement posted to Facebook. “… In our ongoing efforts to respect the privacy and peace of their grieving family, no additional details will be disclosed.”

The county also reported 30 new cases Friday, bringing its total to 661, 291 of them coming in the past two weeks.

The new cases by age:

The News-Gazette’s Deb Pressey reports: Four area counties — Champaign, Douglas, Ford and Vermilion — have open COVID-19 outbreaks at long-term care facilities, according to the Illinois Department of Public Health on Friday. By county, the facilities include:

Outbreaks in long-term care facilities are considered to be open if the facilities have had any new cases in the past 28 days.

Counting both open and closed outbreaks at long-term care facilities, there have been 115 cases and 10 deaths in Champaign County, 99 cases and six deaths in Ford County and 31 cases in Vermilion County.

The only two outbreaks to date in Douglas County are those that are currently open.

As of Friday, there have been 33,440 COVID-19 cases at long-term care facilities statewide, 5,019 of them resulting in deaths, according to the state public health department.

The seven-day rate without University of Illinois testing factored in — the figure the state will use for Champaign County in its mitigation plan — rose from 3.7 to 4.0 percent.

The seven-day rate for the East Central Illinois region Champaign County is a part of on the state’s mitigation map (Region 6) fell from 7.5 to 7.3 percent without UI tests.

— The number of county residents hospitalized with COVID-19 remained seven for the third straight day.

After four days at 0.1 percent, the seven-day positivity rate on campus rose slightly Friday, to 0.2 percent.

There have been dozens of new COVID-19 cases at the Libman Co. plant in Arcola since Oct. 11, a company official told The News-Gazette’s Deb Pressey on Friday.

Company President Andrew Libman said the plant had very few cases since the start of the pandemic, about 20 over eight months, and started out the week of Oct. 11 with three active cases.

But since last Thursday, the plant has averaged 10-15 new cases a day, he said.

The company has been working closely with the Douglas County Health Department, which has also been on site testing employees, he said.

Since the pandemic started, Libman said, the company has been taking precautions, including mask-wearing, use of hand sanitizer and making sure employees are working at distances from each other.

“We are very spread out. We have 1.5 million square feet here,” he said.

The state’s seven-day positivity rate fell slightly — from 5.7 to 5.6 percent — ending a 16-day stretch where it either increased or remained unchanged.

The Illinois Department of Public Health also reported 31 fatalities statewide on Friday, including two in Vermilion County that were reported locally earlier this week:

— Daily statewide hospitalization totals, according to IDPH: 2,498 people hospitalized (up 35 from the previous day), 511 patients in ICU beds (down 14) and 197 patients on ventilators (down 15).

Through tears, Illinois Department of Public Health Director Dr. Ngozi Ezike once again called for widespread use of face coverings Friday after warning of increasing COVID-19 hospitalization numbers that could surpass the peaks of April and May.

“I mean it's sad to see the numbers going up again,” Ezike said at a COVID-19 briefing in Chicago. “People have worked really hard to get us through the first phase … and as we see the numbers go up in the hospital, people are bringing more beds, trying to prepare for the COVID units again, and the staff that went through all that pain to try to save as many people as they can are seeing history repeat itself.”

“I've never run a marathon, but I have the utmost regard for those who've been able to train and plan and finish a marathon. But this is a difficult race when you can't actually see the end point, and I'm sorry that that's the message I have for you,” Ezike said.

“Nevertheless, I'm asking you to fight the fatigue,” she added. “Fight the urge to give up on social distancing. Fight for your kids to have safe, healthy opportunity to have in-person learning in school with teachers who were trained to teach them in the classroom.

“Fight to have safe, healthy environments in which we can work so that businesses can remain open so that our economies can start to thrive again. This does mean wearing your mask.”

Ezike and Gov. J.B. Pritzker reiterated that face coverings are the most effective means for limiting the spread of the virus, along with keeping six feet of distance from others and not gathering in large crowds. She said she is searching for a message to convey the importance of masking to all, even when meeting in private gatherings.

“And so if you're talking about COVID fatigue from having to keep wearing a mask — think about the COVID fatigue for health care workers, respiratory therapists who are going to have to go through this whole episode again, of trying to fight for people's lives, because we couldn't figure out how to control this virus by doing some of the simple measures that have been prescribed,” she said.

She said the decisions of those who attend unmasked gatherings promote the spread of the virus which can then find its way to more vulnerable populations. She urged those attending unmasked gatherings to “think beyond themselves” and consider who they may unknowingly infect, especially if they have the virus but are not showing symptoms.

“All these people who work with the public on a regular basis — you cannot work from home as a bus driver,” Ezike said. “And so these people have to go to work every day as the disease is increasing throughout the state. And they're the ones that will be dying.”

Each of the 11 regions had a COVID-19 test positivity rate of 7 percent or higher, with Region 4, including the Metro East area on the Missouri border near St. Louis, hitting an 8.1 percent positivity rate. Two more days above 8 percent and the region would be subject to increased mitigations for the second time.

While Pritzker said he was not considering a statewide stay-at-home order like he levied earlier in the pandemic, he noted the state will enforce mitigation measures in the various regions subject to them.

Pritzker said he will follow emergency rules approved by a legislative rule-making committee which allow for warnings, citations and dispersal orders for businesses not following mitigation rules. Authorities can perform checkups at locations and those not following rules “will be subject, potentially, to having proceedings initiated against them to remove their gaming or their liquor licenses,” he said.

Pritzker has noted the Illinois Department of Commerce and Economic Opportunity will give preference to businesses in regions that have had increased mitigations when it distributes Business Interruption Grants funded by the federal government.

He also once again urged federal action on a measure to provide funding for state governments and more grant opportunities to small businesses that have faced business interruptions.

“I'll continue that fight. For whatever reason, that isn't happening, the federal officials, federal congressmen, senators, the president can't seem to get together to get that done,” Pritzker said. “So, what I can say is that, unfortunately we still have to live by the rules here because we don't want people to get sick and die. …The truth is that if everybody will wear their masks, we can get our businesses back open again much quicker.”