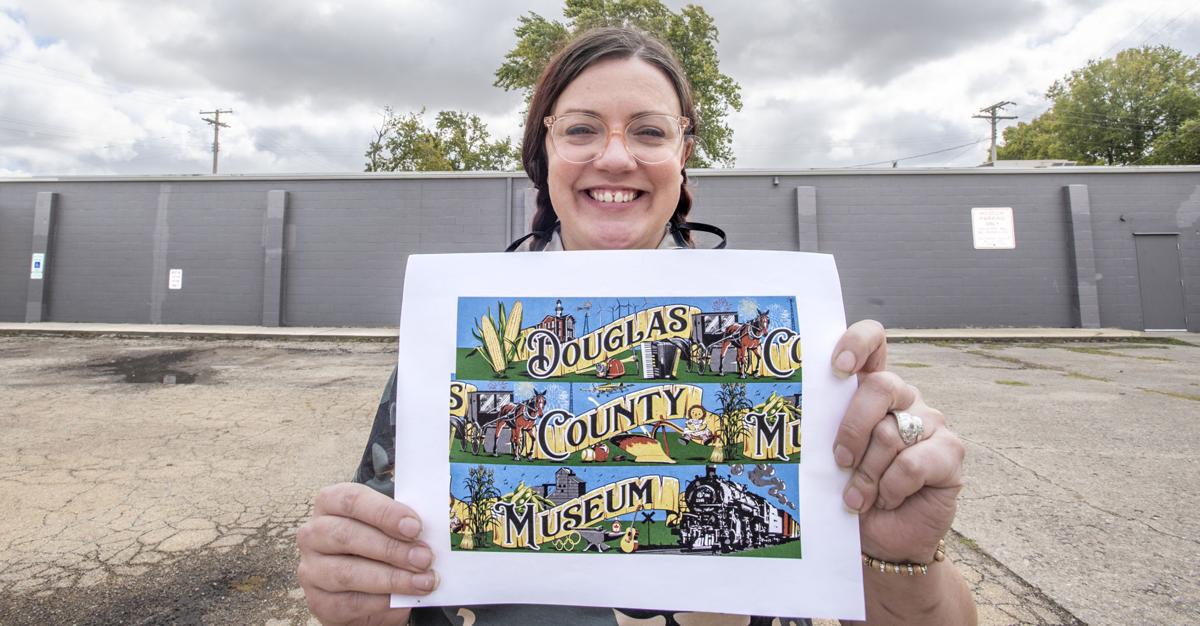 Anna Miller, executive director of the Douglas County Museum, displays a rendering of a mural to be painted on the gray wall behind her.

Ainslie Heilick designed a 110-foot wide mural for the side wall of the Douglas County Museum. Submitted

Anna Miller, executive director of the Douglas County Museum, displays a rendering of a mural to be painted on the gray wall behind her.

Ainslie Heilick designed a 110-foot wide mural for the side wall of the Douglas County Museum. Submitted

TUSCOLA — Growing up, Ainslie Heilich didn’t have to go further than his parents’ antique store or even leave his house, which was 200 years old, to catch a glimpse of history.

“Old things have always been something that have been a part of my life,” he said. “It’s never been something where I was like, ‘Let me check out history.’”

Heilich moved to Tuscola nine years ago, and the town embraced him. He opened up a tattoo parlor called Vintage Karma, and when he met Douglas County Museum President Anna Miller, she didn’t have to try hard to convince him to join the museum’s board and become its vice president.

The support he felt in the town continued through what he called a “very public” gender transition, something he knows many people wouldn’t expect from a small, rural town surrounded by cornfields.

Now, he’s making a mark on the town that he’s made his home.

A few months ago, he and Miller began speaking about painting a mural on the long, gray wall of the museum. While the building is an appropriate size and space for the museum, the converted IGA grocery store isn’t exactly eye-catching.

“We have a very plain building,” Miller said. “The size is great, but there’s nothing that speaks to county history on the outside.”

After they reached out to several mural artists and finding the cost prohibitively expensive, Heilich, who has a degree in art history from Virginia Commonwealth University, began drawing up a design of his own on his iPad.

Spanning the entire, 110-foot-long, 11-foot-high wall, the mural features ears of corn on one side and a steam train, the type that actually would have gone through town in centuries past on the Illinois Central railroad line, on the other. It features a horse and buggy to honor the Amish, and a Raggedy Ann doll, which originated in Arcola. It has an old farm windmill next to modern windmills that were recently built just outside of Newman and an apple to honor the yearly Apple Dumpling Festival in Atwood. The words “Douglas County Museum” are weaved into the design, spelled out in large letters. It’ll include a QR code that takes visitors to a website that shows what each object represents.

In total, he spent 35 hours on the design, which the iPad tracks.

Now, others will have a chance to get involved. Heilich, Miller and other local artists will draw outlines, and volunteers from the community will be welcomed to come paint inside the lines. On Oct. 17 and Oct. 24, they’ll have beverage vendors. Because the wall is so long, Heilich said, there’s enough space to keep socially distant when numerous people are there.

“We wanted as many people involved in it as possible and to feel ownership of it as well,” Miller said.

Heilich hopes the project inspires other organizations, businesses and artists to beautify the town he’s grown to love.

“My hope is that it can be something to kick off doing more murals around town,” he said. “It would be cool, something that can be a tourism draw and community pride.”

The mural will include ears of corn, a steam train, a horse and buggy to honor the Amish and a Raggedy Ann doll, which originated in Arcola.