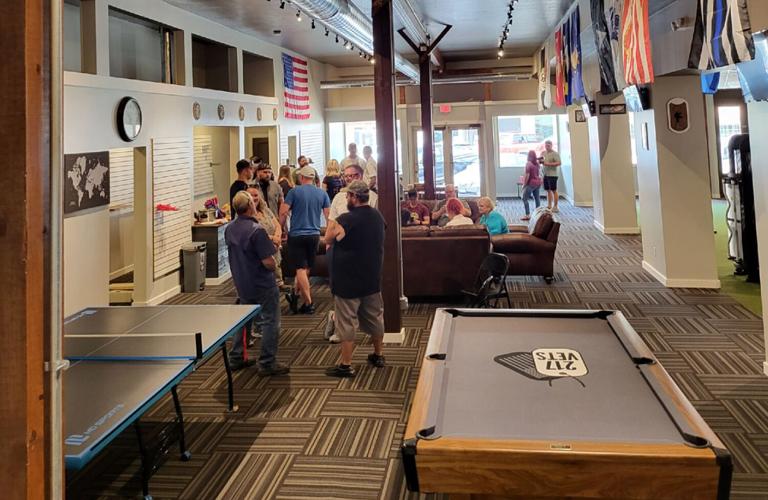 Area veterans visit in the lounge at the 217 VETS facility called The Barracks in Tuscola before a recent outing to The Axe Bar in Champaign. 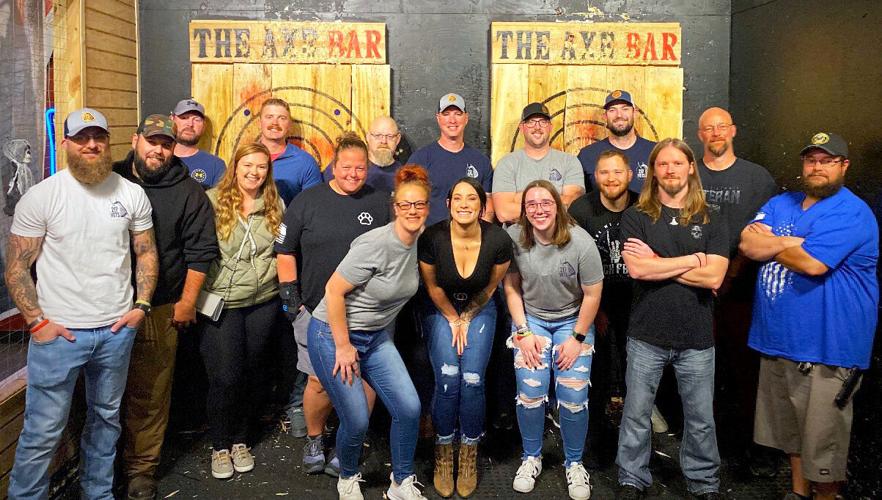 Participants in a 217 VETS camaraderie outing gather for a group photo at The Axe Bar in downtown Champaign.

Area veterans visit in the lounge at the 217 VETS facility called The Barracks in Tuscola before a recent outing to The Axe Bar in Champaign.

Participants in a 217 VETS camaraderie outing gather for a group photo at The Axe Bar in downtown Champaign.

TUSCOLA — Gunnar Edwards didn’t consider his experience in the military a difficult one.

He called his time in the Army National Guard, including a year in Afghanistan as an MP, “fun.”

“It wasn’t any crazy deployment like some of the people you may know,” Edwards said. “There were some bad things that happened, but a lot of good things happened, too.”

But it did affect him, “and I didn’t realize it for a while,” Edwards said.

“I struggled for a long time and didn’t realize it, with anger and anxiety,” he said. “My fuse was super short. It took me a long time not to be that way.”

After hitting rock bottom, Edwards got help from the Department of Veterans Affairs and went through therapy.

“Some life changes happened that didn’t help my situation,” said.

Out of the military, the Tuscola native missed the camaraderie.

He knew there were others out there like him. The owner of Rally Point Fitness in Tuscola helped to establish a Wednesday night hangout time where veterans could get together — first at Cast Iron Pub, then above the fitness business and now at a new location at 123 W. Sale St.

“It continued to grow, and more and more veterans took advantage of it,” Edwards said. “We’ve built some amazing relationships.”

Edwards and other veterans involved with the group brainstormed about becoming a nonprofit organization, out of which 217 VETS was born earlier this year. Its new location, named The Barracks, is a place where veterans work out, visit or have in-depth conversations.

217 VETS has a six-member board of directors with Edwards serving as CEO and co-founder and Cory Wagle as vice president.

Wagle said it’s a place to recreate, just hang out or talk with another veteran. Some of the issues can only be understood by someone who has been through them.

He said spouses and children don’t understand and can’t understand because they haven’t been through some of the things the veterans have experienced.

“As a non-veteran, there’s a big lack of understanding there in what triggers people and the thoughts people have,” Wagle said.

One of the bigger issues is sexual abuse of women in the military.

“That’s rampant in a lot of our organizations, but especially in the military, unfortunately,” Wagle said. “It’s there, and unfortunately, a lot of women deal with that.”

Wagle served five years active duty in the Army and one year in the Reserves. He was a truck driver. During his first tour of duty, he saw combat. In his second tour, the Army was pulling out of Iraq.

A native of Jamaica, Ill., he now works for Illini FS and lives in Tuscola, and looks forward to his Wednesday night times with 217 VETS.

On one recent Wednesday evening, about 25 veterans showed up. The group would like to get more coming out.

Wagle said “it’s slow-rolling” — “I think a lot of veterans think it’s ... like a shrink session” — but that’s only part of it.

“We definitely have some cases” where people are struggling and need to talk, he said. “We’re not doctors. We’re not clinicians. But if we can help steer them in the right direction or talk them down from the ledge. ... If we can save one life ...

“We’re just there if someone needs to chat. We’re really there to bring the camaraderie back,” he added. “We’ve had quite a few veteran resource officers come out and want to give a hand and offer their assistance.”

The overarching goal is to give veterans hope.

“They’re not alone. People that are like them” are present, he said. “If they need to vent, we’re there.”

Edwards said the focus is to reach as many veterans as possible. Most of those attending hail from Douglas County, but a few have popped in from places such as LeRoy, Fisher and Macon County.

“It’s all new for all of us on the board,” Edwards said. “We’re all winging this. We don’t have any formal knowledge of how nonprofits are supposed to work. We care about veterans. There’s going to be hiccups and trying to learn as we go. We’re trying to take it slow and do things the right way while trying to reach as many veterans as we can.”

The group will also have special events. Two weeks ago they visited an axe-throwing bar in Champaign.

On Nov. 12, they will host a Veterans Day holiday dinner at 3:30 p.m. There will be turkey, ham, mashed potatoes and all the trimmings “to give veterans a place to go if they don’t have a place.”

“They can bring their spouse and children if they need to,” Edwards said.

Four area veterans honored with Quilts of Valor in Mahomet

The quilts “are presented as a token of appreciation that unequivocally say, ‘Thank you for your service, sacrifice and valor. Welcome home,’” Miller said.