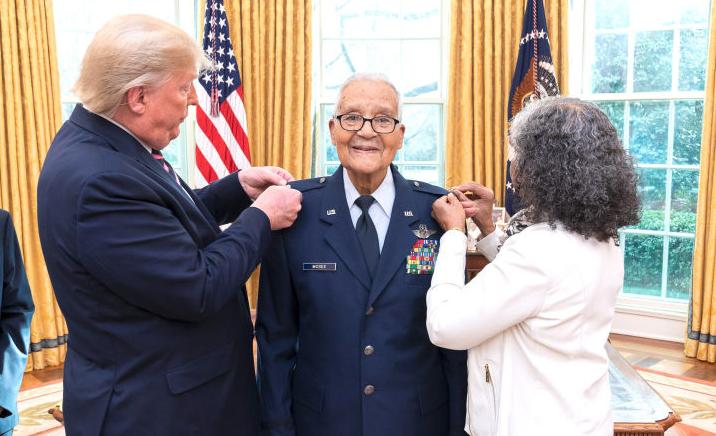 President Donald Trump participates in the promotion pinning ceremony for newly minted Air Force Brig. Gen. Charles E. McGee on Tuesday in the Oval Office at the White House. McGee, a Tuskegee Airman who attended the University of Illinois, was later a guest in the gallery during Trump's State of the Union address. 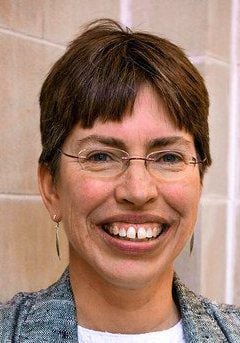 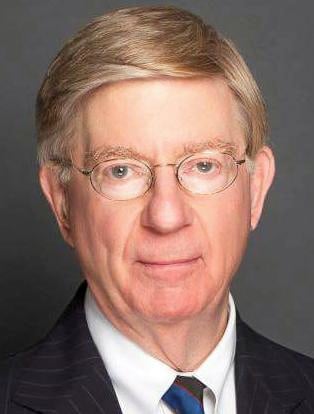 Tuesday night, it was the commander-in-chief’s turn.

“General McGee, our nation salutes you. Thank you, sir,” President Donald Trump said during his State of the Union address, bringing applause from both sides of the aisle.

It’s been a whirlwind week for the 100-year-old former University of Illinois student, who earlier Tuesday in the Oval Office was promoted to brigadier general. Two days earlier, McGee was in Miami — one of four veterans to take part in the coin toss for Sunday’s Super Bowl.

“At first I would say, ‘Wow,’ but looking back, it would have been nice to have had that during active duty, but it didn’t happen that way,” McGee said. “But still, the recognition of what was accomplished, certainly, I am pleased and proud to receive that recognition, and hopefully it will help me carry on as we try to motivate our youth in aviation and space career opportunities.”

McGee is among eight living members of the famed Tuskegee Airmen — the decorated all-black group of fighter pilots who distinguished themselves in combat during World War II and got their start at Rantoul’s Chanute Air Force Base.

Mark Hanson, who served as curator of the former Chanute Air Museum, said McGee trained there in 1948 when he took a 10-month course on aircraft maintenance.

“He would have been someone who, I believe, would have supervised the guys who were working on the airplanes,” said Hanson, who met McGee years later when he visited the air museum and was struck by his friendly personality.

It’s not McGee’s only tie to Champaign County.

He enrolled at Illinois in 1940, taking prerequisites for the engineering program before changing his major to life sciences. Two years later, he met Champaign native Frances Nelson, who he’d marry.

On campus, McGee was a member of the Army ROTC, the Pershing Rifles drill team and the Alpha Phi Alpha fraternity.

McGee, who retired in 1973 as a colonel, had a military career that reached across three decades. He flew 409 combat missions during three wars and was presented the Distinguished Flying Cross, Legion of Merit, Bronze Star, Air Medal and the Presidential Unit Citation.

Speaking of the State of the Union address ...

What happened Tuesday night on Capitol Hill was unlike anything longtime political observers have ever seen — and we don’t just mean the theatrics after the State of the Union.

He says: “I know Nancy Pelosi and admire her professionalism, which was not on display in the speech-tearing incident. There is no point getting into a rudeness competition with Donald Trump: Schoolyard taunts — I honed mine at Dr. Howard in Champaign — are his specialty.”

She says: “Sadly, there is precedent that I feel was far worse. Congressman Joe Wilson shouted out ‘You lie!’ during one of President Obama’s State of the Union addresses. All of us, from all political affiliations, have to do better.”

While Charles McGee was being recognized by the president during Tuesday’s State of the Union address, many members of his extended family in Champaign-Urbana were glued to the TV.