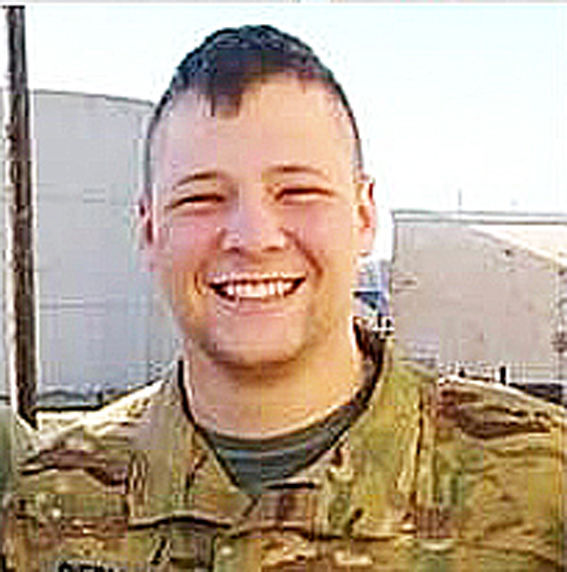 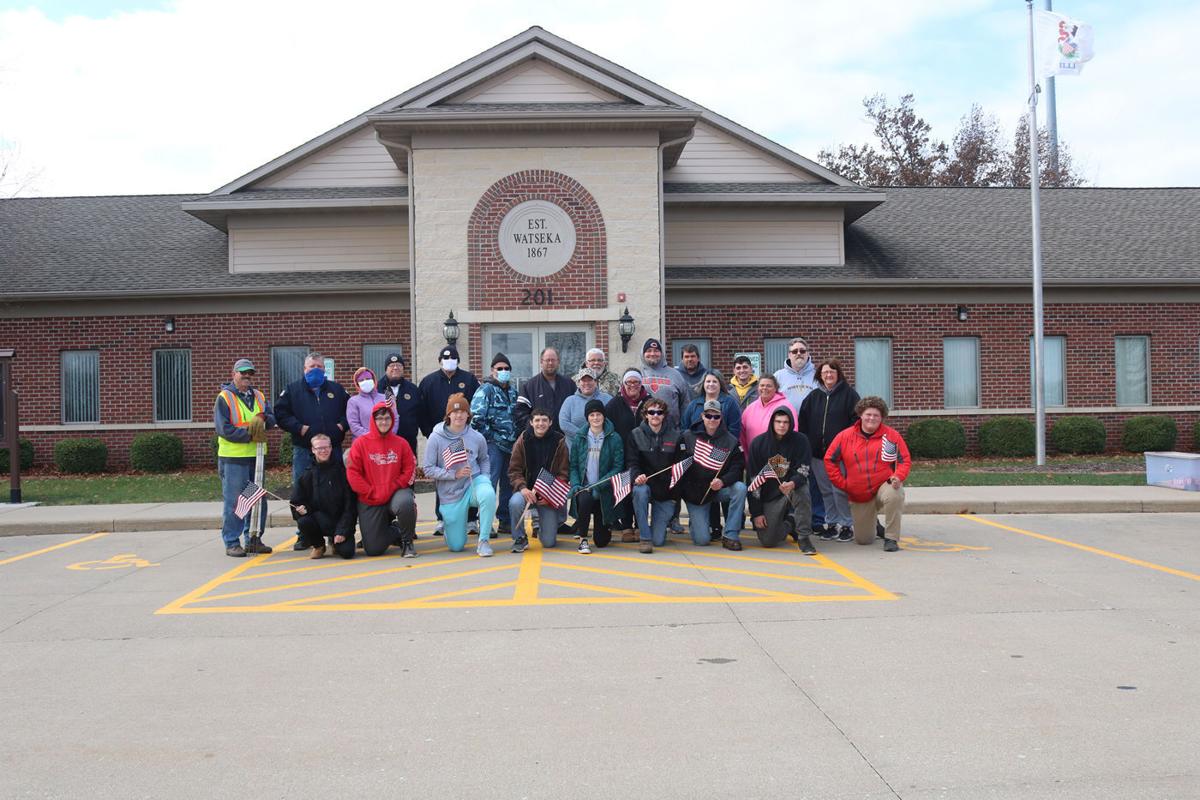 A few of the about 40 volunteers who placed American flags along the main streets of Watseka on Sunday morning to honor the memory of the late Sgt. Jeremy Sherman (inset) of Watseka. Mr. Sherman was killed when an helicopter he was riding in crashed last week in Egypt.

A few of the about 40 volunteers who placed American flags along the main streets of Watseka on Sunday morning to honor the memory of the late Sgt. Jeremy Sherman (inset) of Watseka. Mr. Sherman was killed when an helicopter he was riding in crashed last week in Egypt.

WATSEKA — A group of Watseka residents spent time Sunday morning lining the major streets in the city with American flags in honor of a fallen soldier.

Sgt. Jeremy C. Sherman was one of five American soldiers killed in a helicopter crash on a peacekeeping mission in Egypt last week. Also killed were soldiers from France and the Czech Republic.

He and fellow soldiers were part of the Multinational Force and Observers — a multinational peacekeeping mission established in 1981 to supervise the implementation of the security provisions of the Egyptian-Israeli Treaty of Peace.

The group of about 40 volunteers lined U.S. 24 and Illinois 1 in the Watseka city limits with American flags in Sgt. Sherman’s honor.

The group was made up of Amercan Legion members, FFA members, teachers, students, coaches and others in the community who wanted to honor Sgt. Sherman and show support for his family.

Eric Starkey and son Quinn were two of the volunteers. Eric Starkey said they were honored to help out.

“In a small town, it’s something you don’t ever think about happening,” he said. “You see it on the news in the world all the time, and then when it hits a little closer to home, you feel that obligation, especially when it’s someone so young giving his life for his country.

“It’s an obligation to stop what you are doing and help out,” he said. “For me to bring my son out here, and to get him to understand the sacrifices that people make everyday for us to be able to live in this country and have the freedoms that we have, it’s the least we can do to come and take an hour to put flags up. It’s something we will not forget.”

Legion member and Vietnam veteran Ken Lehmann said he was there to honor “the loss of a comrade.”

“I couldn’t believe it was somebody from here,” he said. “We lose a lot of the older ones, but the younger ones shouldn’t go.”

“We really appreciate being called to do this,” he said, noting the community turnout was good.

Amy Curry and children Conner and Claire also helped out. Curry, a teacher at Glenn Raymond School, remembers teaching Sherman in school. He graduated from Watseka Community High School in 2015.

They felt it was important to help out Sunday morning.

“Freedom is not free,” Amy said, “and we have a hometown hero who gave his life in honor of that freedom, and we owe him a lifetime of gratitude.”

He enlisted in the military in 2015 and arrived in Egypt in October. He had seen previous overseas assignments that included tours in Korea and Afghanistan.

Connie Caldwell was a guidance counselor at WCHS when Sgt. Sherman was in school there.

She wrote, “When I heard of Jeremy’s accident, my first thought was about his family. Jeremy always made it clear that he loved his family, his parents and siblings.

“Jeremy’s death brings back the reality that any young person volunteering to serve our country faces risks everyday whether at war or not.”

Jonica Suver wrote she had “the joy and privilege” to have Sgt. Sherman in her youth group when he was at WCHS.

“Jeremy was always smiling, polite and kind. I always enjoyed having him at Refuge and appreciated how he would give anyone a hug if they needed it! He had a bit of an ornery streak in him and loved making everyone laugh!”

Suver said Sgt. Sherman was impacted by the speakers at a winter retreat.

He wrote on social media: “This last weekend at SpringHill Camps has changed me and I’m pretty sure the whole group that went. I just need to step up and stop being just a believer and be a follower in Christ. This whole trip has changed my point of view on a lot of things and I thank our leaders for bringing us and making all of us stronger Christians!!!”

Teacher Darin Hartman said he remembers Sgt. Sherman as a student who was always smiling. Even when Hartman didn’t have him in class, “he would stop in periodically,” he said.

“My heart just broke” when Hartman heard the news of Sgt. Sherman’s death. “It puts things in perspective. I have so much respect for men and women that enlist and serve our country. My heart breaks for his parents. They are certainly in my prayers.”