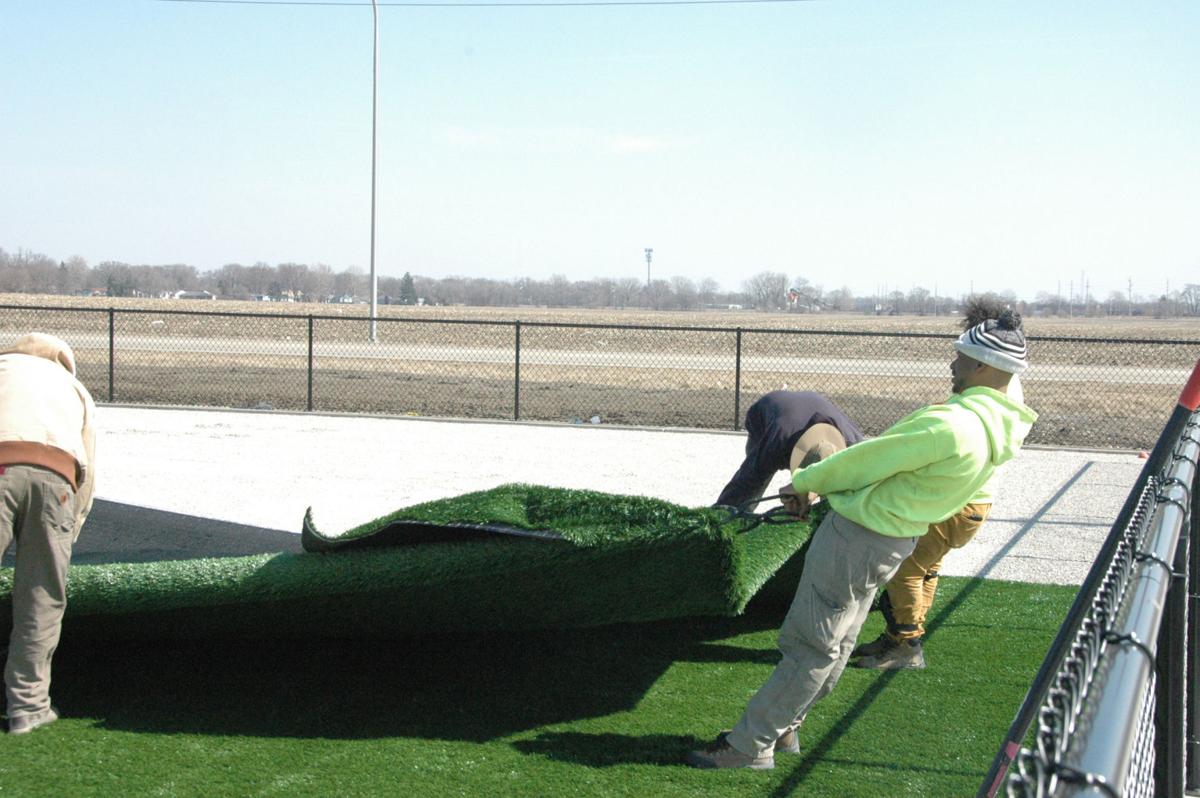 Workers stretch out some artificial turf earlier this month on an east field at the Rantoul Family Sports Complex on the village’s west side. 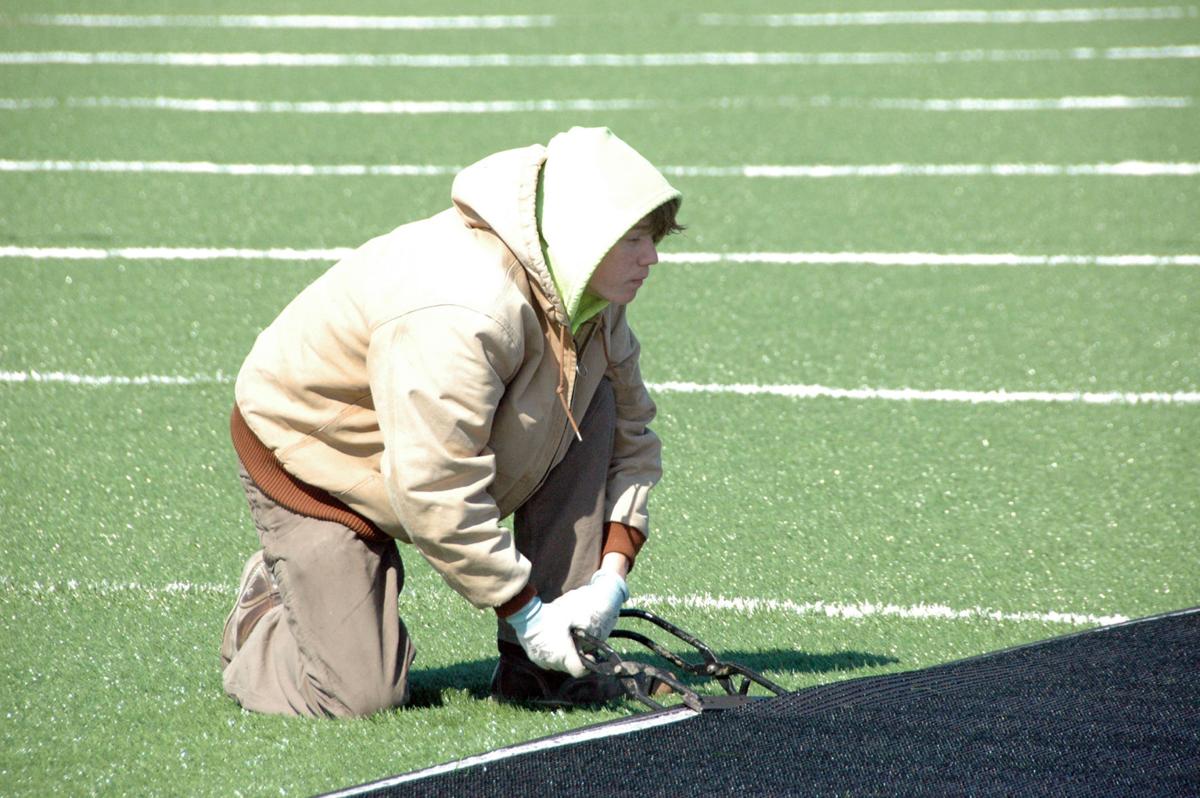 A worker holds a clamp on the new artificial turf being installed at the new Rantoul Family Sports Complex earlier this month. 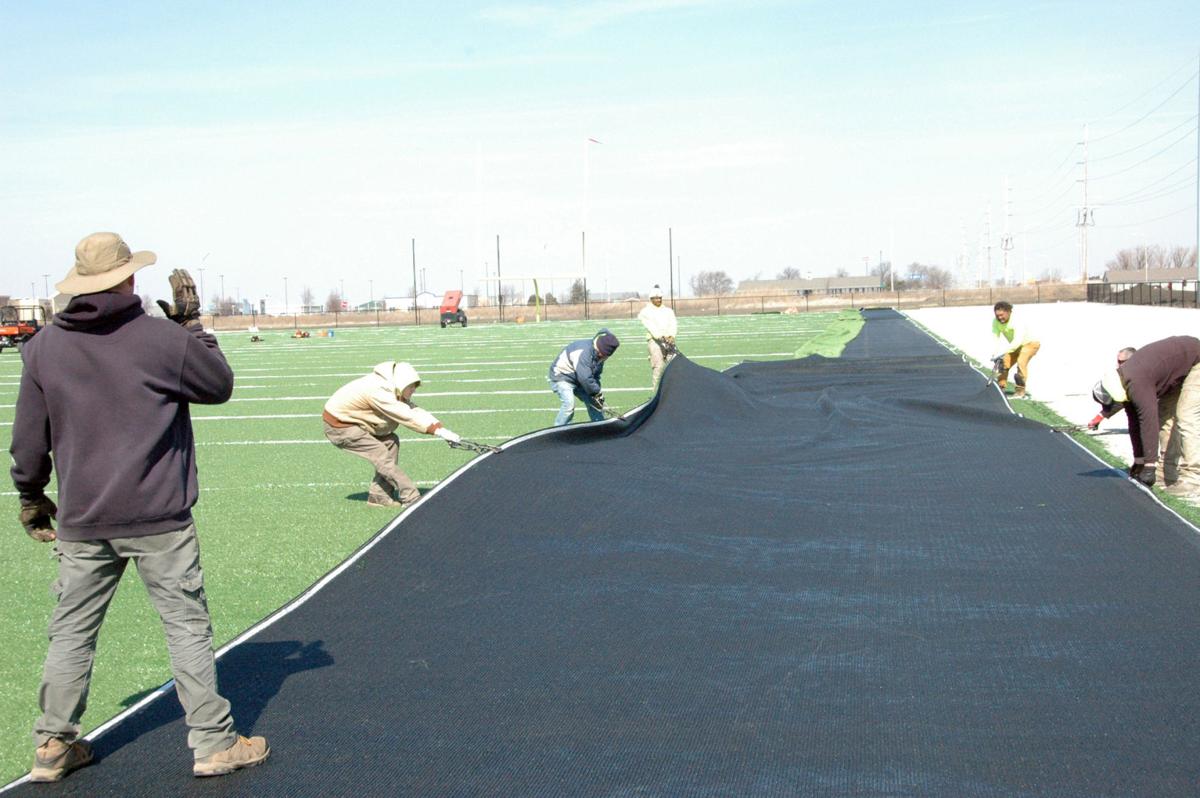 Workers stretch out some of the artificial turf on an east field on the Rantoul Family Sports Complex earlier this month.

Workers stretch out some artificial turf earlier this month on an east field at the Rantoul Family Sports Complex on the village’s west side.

A worker holds a clamp on the new artificial turf being installed at the new Rantoul Family Sports Complex earlier this month.

Workers stretch out some of the artificial turf on an east field on the Rantoul Family Sports Complex earlier this month.

RANTOUL — The pandemic has provided at least one bright spot for the soon-to-be-opened Rantoul Family Sports Complex.

A spring soccer tournament normally held on the grounds of the University of Illinois will be moved to the new complex, bringing thousands of players and their families to Rantoul.

Director of Sports Operations Ryan Reid said the tournament will have an economic impact of about $2.5 million on the community.

“We’re running baseball-softball tournaments the same weekends, so it will be very busy,” Reid said.

Skip Maier, president of the Illinois Futbol Club board, said the club has held spring and fall soccer tournaments on the UI campus annually.

“This past year, because of the pandemic, we weren’t going to be allowed to have the tournament on campus,” Maier said. “We’ve been talking to the folks in Rantoul the past couple of years as the plans have come together.”

The complex will be equipped with artificial turf fields and lighting, offering less chance of games being canceled due to bad weather and allowing games to be played after sundown.

“In past years we’ve had to cancel games and reschedule due to rain occurring,” Maier said. “Many times teams couldn’t get as many games (played) as hoped.”

The tournament runs May 7-9. Girls and boys teams will compete.

IFC players come from throughout Champaign County, with most of them hailing from Champaign-Urbana.

Teams will travel “from all over the area” to play in the tournament, including Chicago, Jacksonville, Bloomington, Decatur and Peoria.

“In the past, we’ve had teams from Indiana, Wisconsin and Iowa,” Maier said.

Organizers hope to draw as many as 150 teams.

Maier said he doesn’t know if the club’s fall tournament will return to the UI campus or will be played in Rantoul.

Reid said two soccer tournaments have been booked with four more “in contract” (in the works).

The adjacent multi-purpose fields will be equipped to hold rugby, football, soccer and other sports.

“They would have been here in April, but due to state regulations with mask-wearing, (the teams) decided to stay with their venue in Indiana.”

The sports complex is equipped with 10 softball-baseball diamonds, including Challenger fields for youth with disabilities. There are eight multi-purpose fields.

There will also be a hospitality hub that includes main offices, a tournament room, bathrooms and concessions; a playground and splash pads.

There will be four parking lots.

The pandemic delayed expected sports tourism growth this year resulting from construction of the complex, including new hotels, restaurants and retail outlets. It will likely push building of those facilities back about a year.

“The amount of events we’re going to bring in, ... we really can’t build enough hotels in Rantoul,” Reid said.

He said the finishing touches are being put on the sports complex, including the remaining turf, cleanup and parking lots.

“Then it’s just a few aesthetics and getting some signage up.”

The village takes ownership of the complex April 1.

An attractive aspect of the complex is its accessibility — just east of Interstate 57 and south of U.S. 136.

It will be equipped with state-of-the-art LED lights and electronic scoreboards. The synthetic turf is state of the art using a rubber-sand combination.

The first event scheduled at the complex is a youth baseball and softball tournament with Gameday USA.