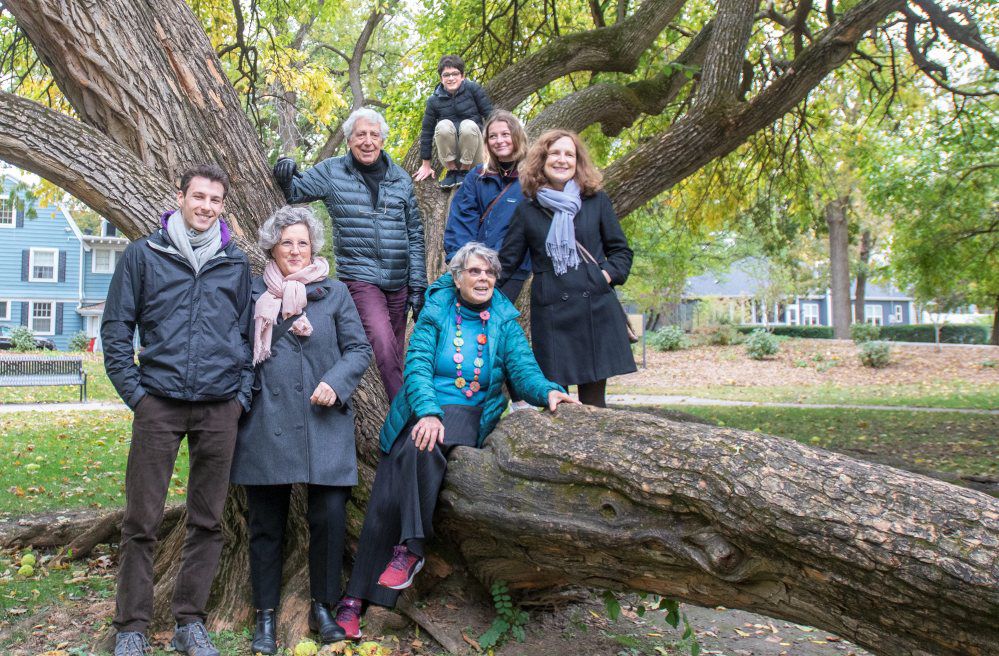 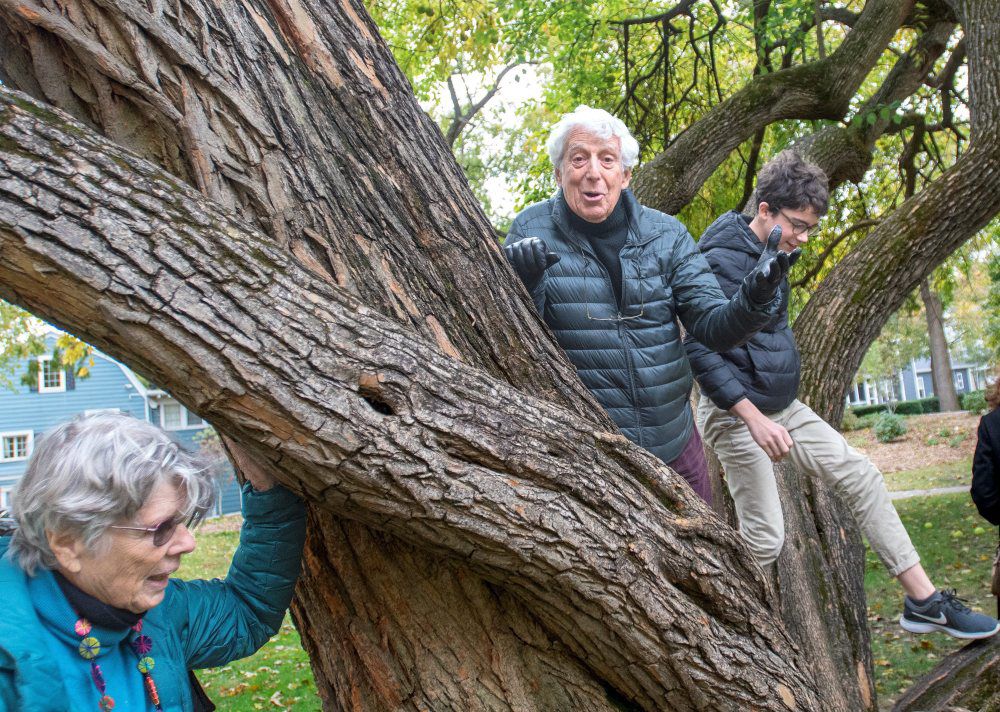 Carol Finch Cone Rose, a descendant of the Trevett-Finch family, and her husband, Thomas Rose, and grandson, Emil Rose-Levy, 13, prepare for a family photo on the Osage orange tree at Trevett-Finch Park on Tuesday. Thomas said climbing up on the tree was a once-in-a-lifetime opportunity.

Carol Finch Cone Rose, a descendant of the Trevett-Finch family, and her husband, Thomas Rose, and grandson, Emil Rose-Levy, 13, prepare for a family photo on the Osage orange tree at Trevett-Finch Park on Tuesday. Thomas said climbing up on the tree was a once-in-a-lifetime opportunity.

CHAMPAIGN — The latest in a long line of family photos was taken last week under the winding boughs of the Osage orange tree at Trevett-Finch Park.

This one was special, linking the iconic tree at the corner of Prospect and University to its original family visiting from France.

It was part of a pilgrimage by Champaign native Carol Finch Cone Rose, who brought her grandchildren from Paris to teach them about their family’s prominent role in Champaign history.

“I want these grandchildren to have visual images of another life,” said Rose, who moved to Paris in 1965. “I want them to see the way that my family lived. We’ve lived anonymous lives in France, which is what I was seeking. I just wanted them to understand where they came from.”

Their Champaign roots run deep. Trevett-Finch Park was originally part of a 5-acre farm purchased in 1857 by Oliver Trevett, which was later passed to his son, John Trevett, co-founder of Trevett-Mattis Banking Co. (later Bank of Illinois).

John Trevett’s daughter, Helen Mary Trevett, married Dr. James Finch, a local physician. John Trevett built the couple a stately brick home at 909 W. University Ave., next to the current park, in 1917. He feared a humble general practitioner who was paid in produce or eggs would never make much money, according to Carol Rose.

The Finches had a daughter, Helen Bess Finch Cone, who became an interior decorator and regular contributor to society news in The News-Gazette and Champaign-Urbana Morning Courier. She raised Carol and two other daughters in the house at 909 W. University.

In the late 1980s, Helen Bess Finch Cone and the other remaining Trevett-Finch relatives agreed to donate the tree and the open area around it to the Champaign Park District. Carol Rose said her sister, retired history Professor Claire Robertson of Bloomington, Ind., was instrumental in her mother’s decision. A third sister, Linda Cone Allen, lives in Orlando, Fla.

“You cared for it so beautifully,” Rose told Auteberry on Tuesday, marveling at the enormous twin trunks. “It’s amazing. I would say it was about half of that height the last time I saw it” a quarter-century ago.

The trip brought back memories for Rose’s two daughters, who spent summers with their grandmother in Champaign as children.

“I know the city’s expanded a lot, downtown has changed a lot from what I remember. But walking up and down on the streets in this neighborhood, it completely resembles my childhood memories,” said Clarissa Baum, who last visited in the mid-1990s with her mother.

Baum and Francesca Rose remember everything in Illinois being bigger, hotter and more humid than in Paris, as they usually came in July and August.

They loved climbing the Osage orange tree as kids. They soaked up American culture, swimming in their friends’ backyard pools (a rarity in France then), playing mini-golf and eating at Steak ’n Shake.

“We’d eat out in the car because in those days they still had the trays that hung on the windows,” Baum said.

“I got all my pop culture from my summers here. We watched a lot of television. I think it was the summers spent here that made me more American than I could have been otherwise. Coming here was like this playground,” Baum said.

“Compared to our life in France, it was very exotic,” Francesca Rose agreed.

Their grandmother was cultured and “strong-willed” but loved showing off her French grandchildren, they said.

“Every summer, we did a family photo in front of the tree,” Baum said.

The family took one more group portrait on Tuesday, then stood reminiscing about the tree and the old family home next door — the piece of meteorite that used to lie in the hedge, the fish pond the kids would splash in, the stone bird bath that’s still there.

As they talked, the current owner, Erin Libman, walked over to give them an impromptu tour of the grounds. Her husband, Aaron Libman, moved into the house when his parents, Sondra and Robert Libman, bought it in the 1980s.

“We used to play all the time at the park and the lot behind us,” he said. “There were always kids playing there.”

Sondra Libman said her children liked collecting the oranges from the Osage tree, which was a magnet for neighborhood families.

“It was always a very active park,” she said.

On more than one occasion, Libman invited wedding couples who stopped by for portraits in the park to take photos inside her house, too.

The house has changed over the years, “for the better, I think,” Carol Rose said. A portico stands over what used to be a steep slope down to an underground garage.

“In wintertime, when it was frozen, it was very hard to get out of,” Rose said.

“The house is perfect for this family. It makes me happy to see a happy family there.”

She and her family stopped by two other family homes during their visit — at 101 N. Elm St., now Owens Funeral Home, and 711 W. University Ave., where she moved with her family as a teenager in 1946.

The historic Elm Street mansion was built by John and Helen Martha Trevett in 1900, after two previous wooden homes burned down. One fire was ignited by candles on a Christmas tree, the other with a curling iron, said Carol Rose, who has pictures of the fire engines that battled the flames.

“They decided to build the next house in brick” using bricks from England, she said. “It was a house built for entertaining and balls.”

Rose’s grandchildren, who speak fluent English and French, were grateful for the tour through family history.

“I remember our grandmother talking about this trip a few years ago, and just the excitement in her voice,” Celeste Baum said. “It’s a blessing that we actually managed to come here.

“The trees, the leaves are beautiful,” she added.

They planned to record their grandmother’s memories during the trip.

“Our grandmother loves telling stories. We love listening to them, and we’re really grateful to be able to see where all these originate from,” Auguste Baum said.

The family arrived Monday and spent several days catching up with friends before heading to Chicago on Thursday.

“I’ve met a few people who I hadn’t seen for years, and I met somebody on the street today who recognized me. I’ve been living in Paris since 1965 and nobody recognizes anyone there,” Carol Rose said.

She also had dinner with former Champaign Mayor Dannel McCollum, who briefed her on restoration of downtown.

“It’s wonderful to see the way that the city has come back to life,” she said.