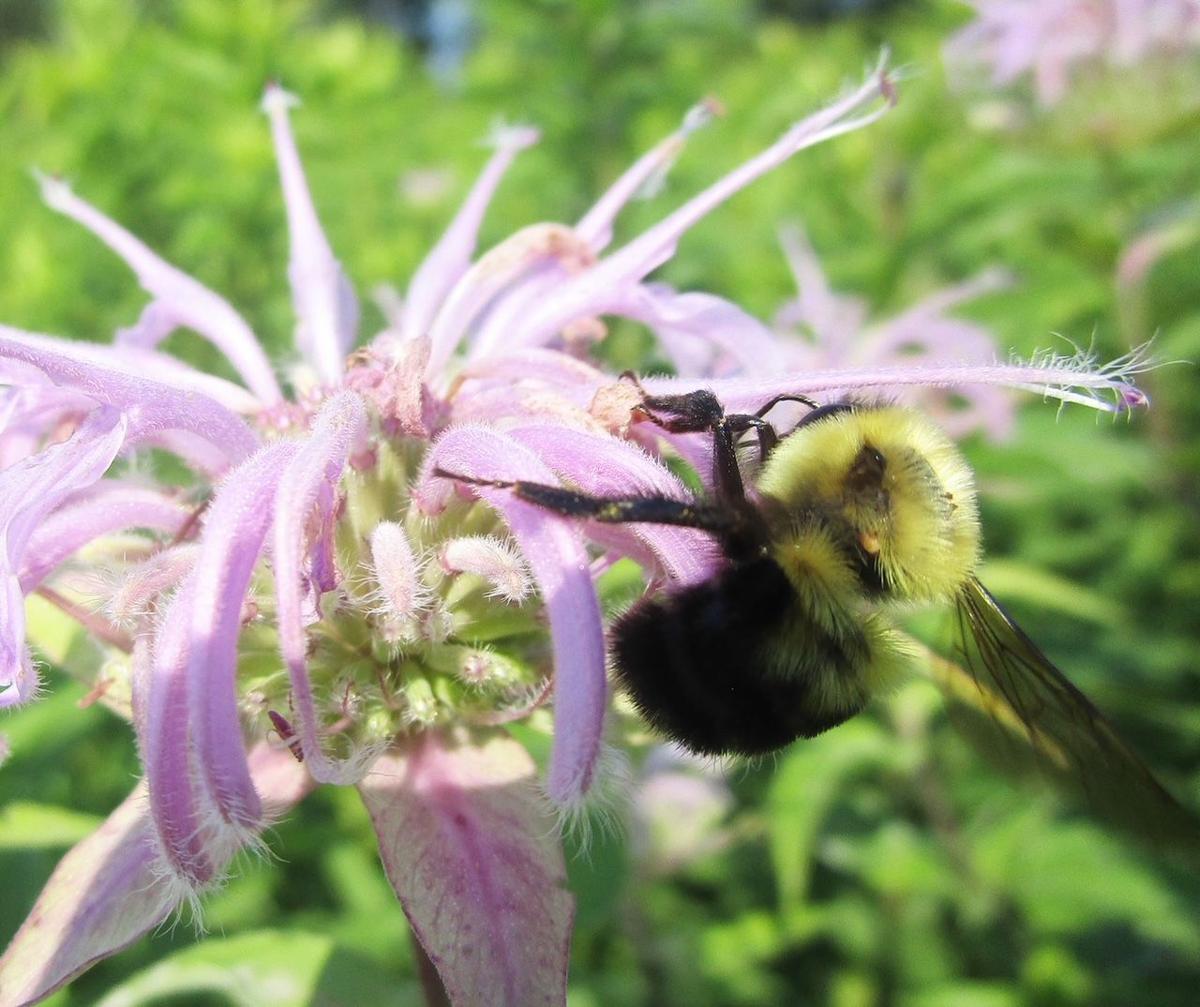 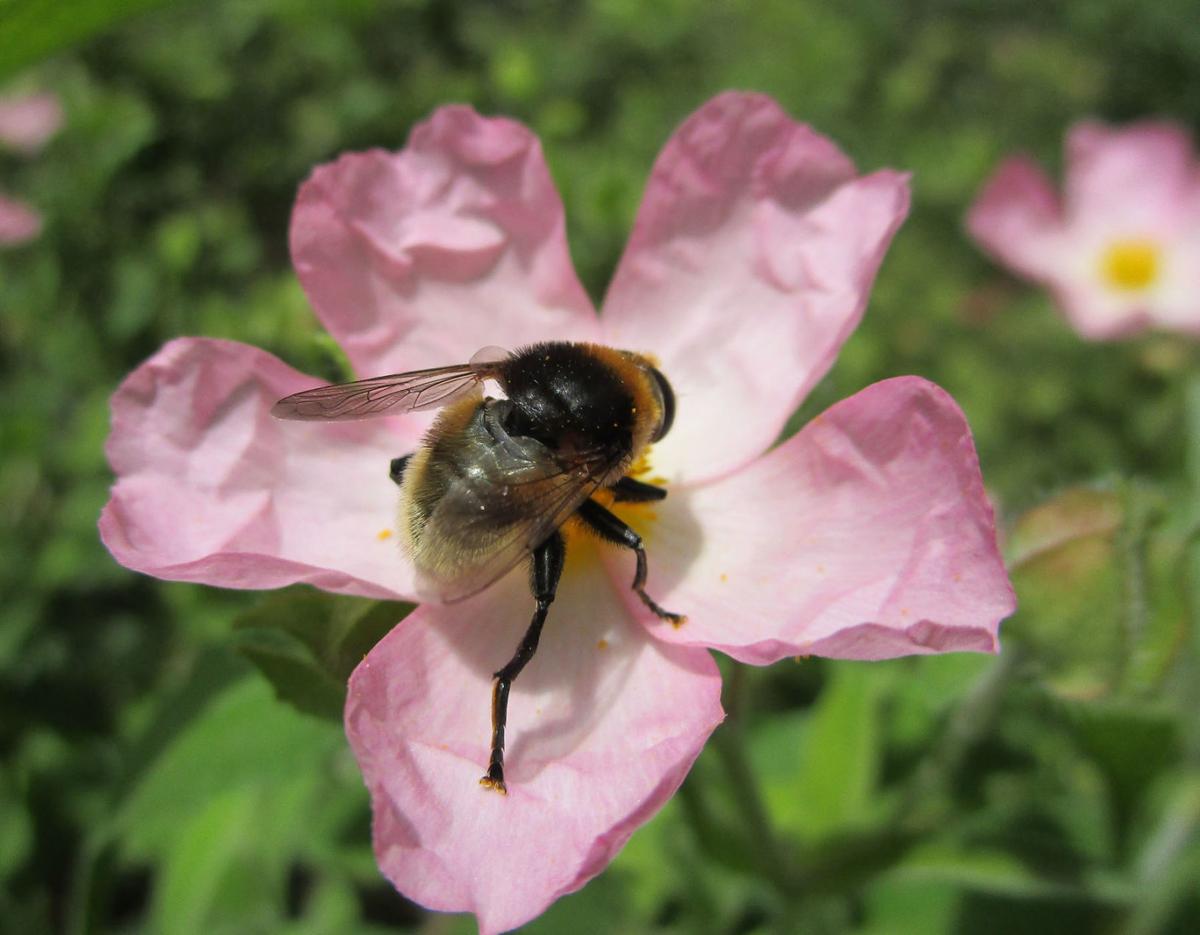 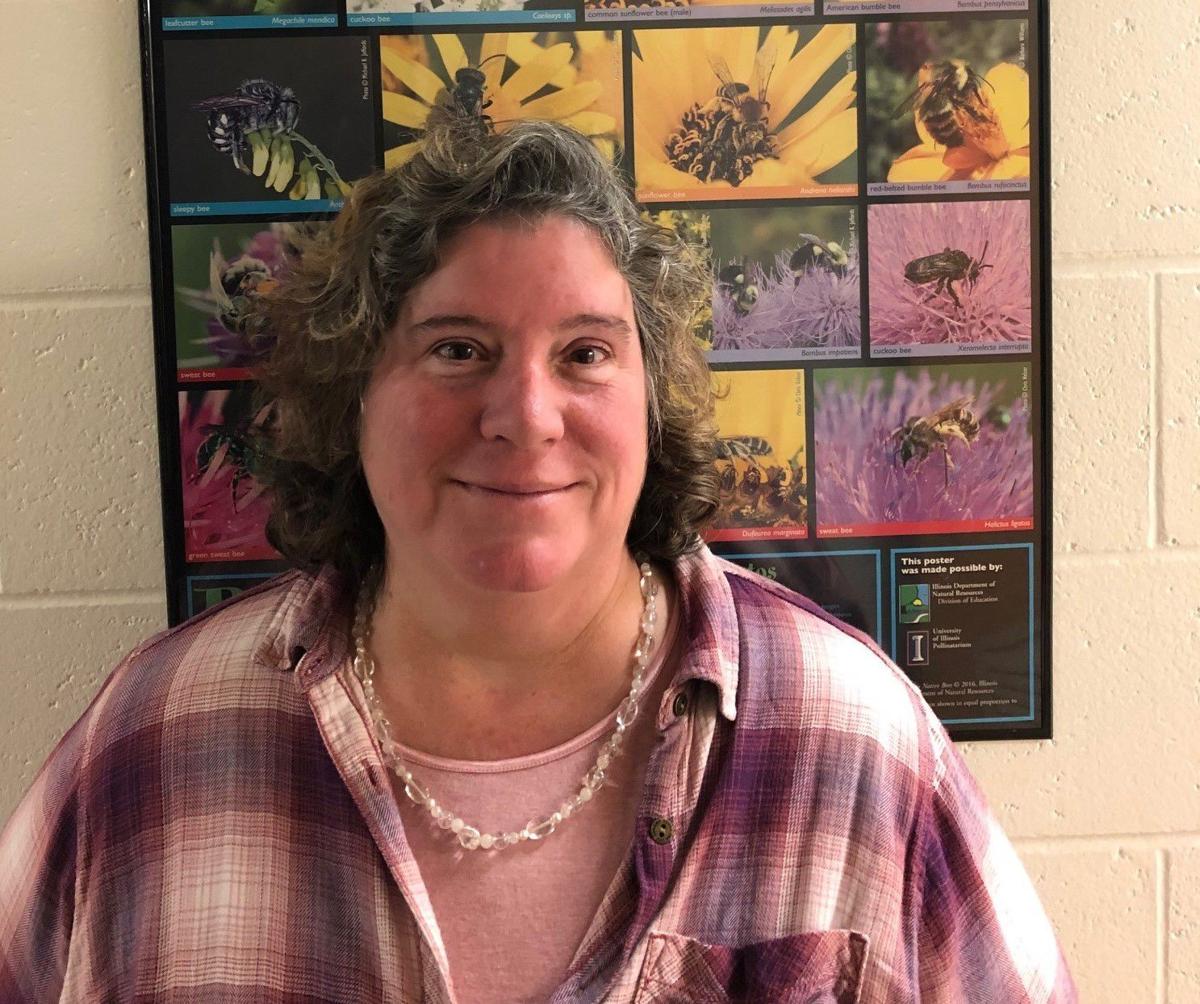 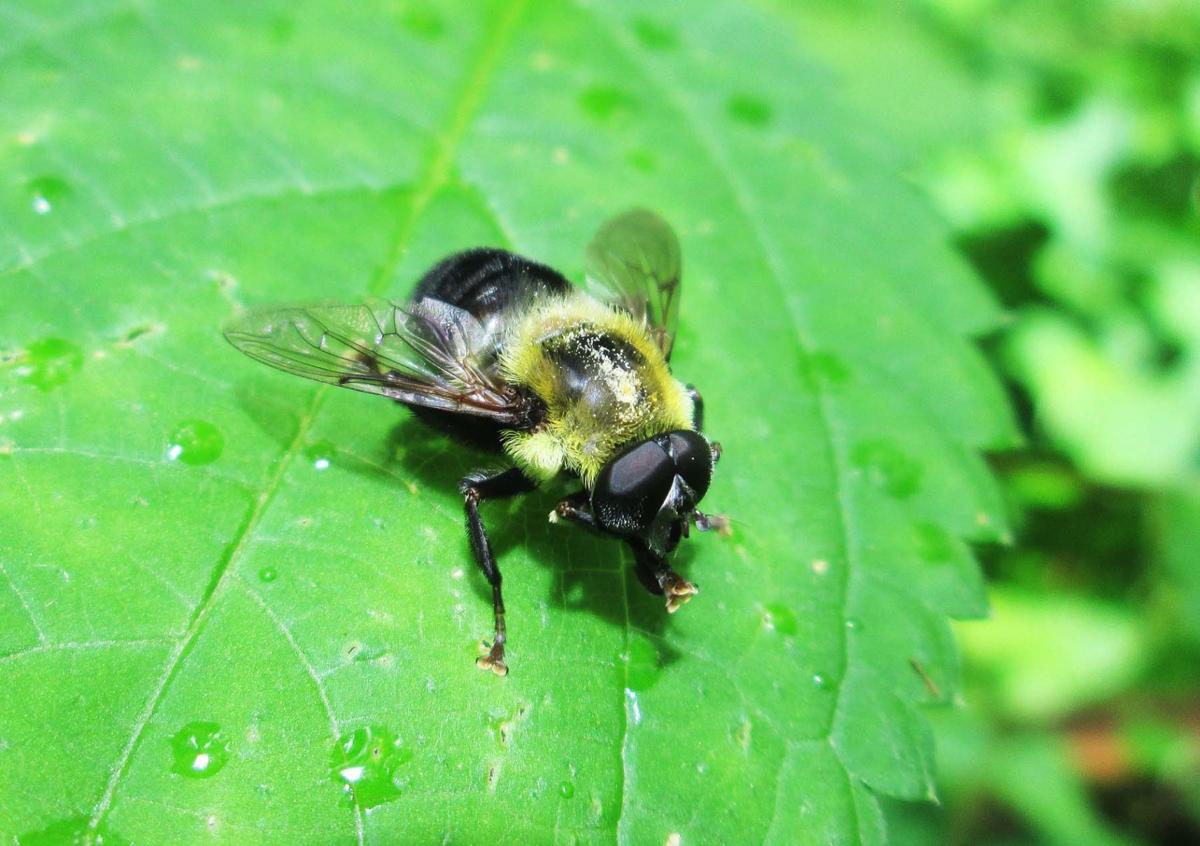 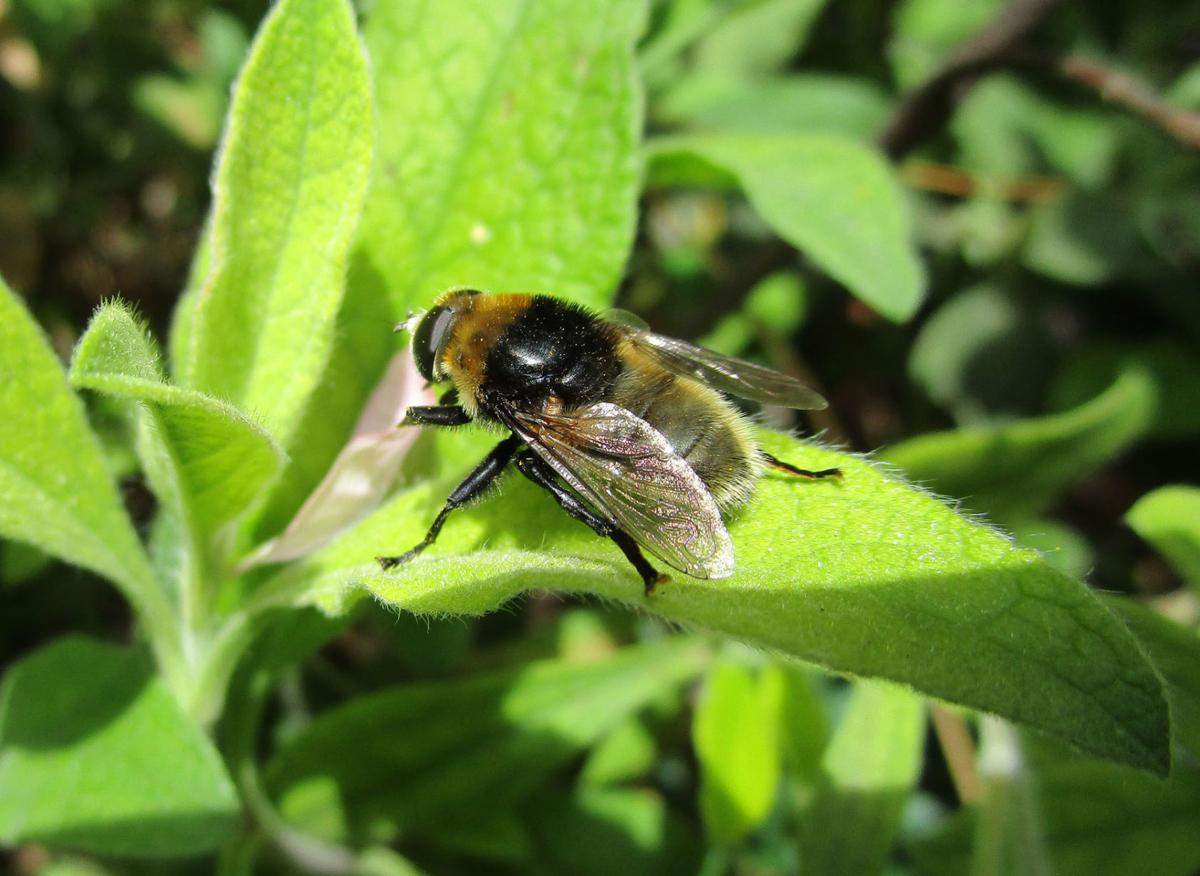 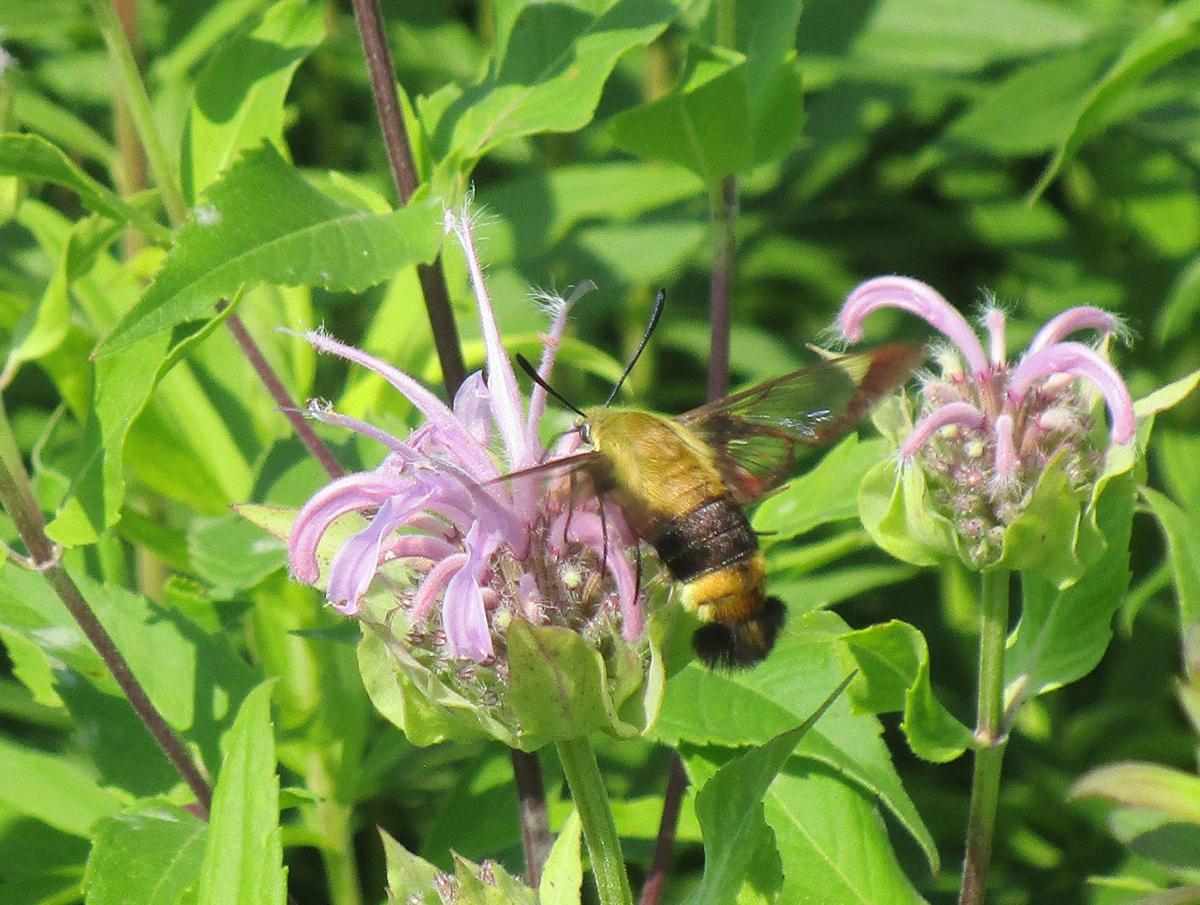 A hawkmoth on beebalm (Monarda fistulosa). 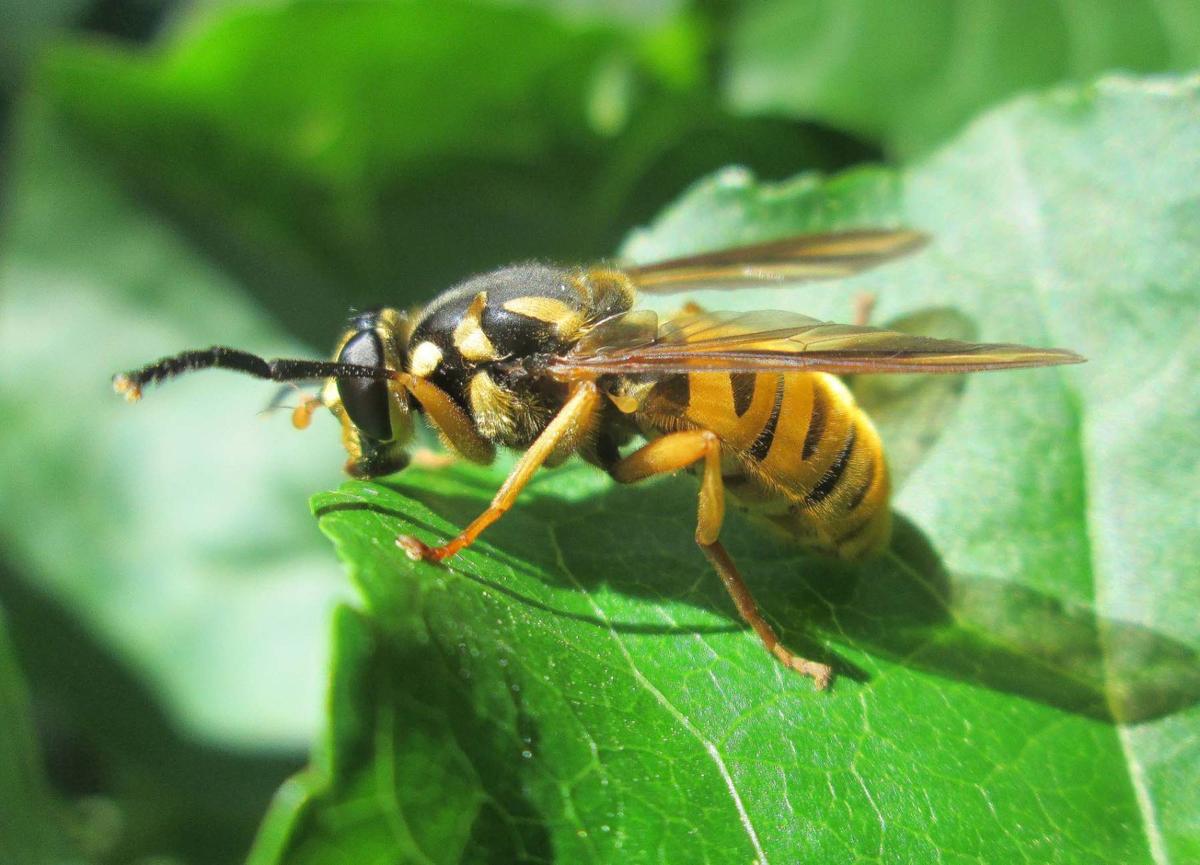 ABOVE: A syrphid fly, a wasp mimic using front legs as antennae. BELOW: A hawkmoth on beebalm (Monarda fistulosa).

A hawkmoth on beebalm (Monarda fistulosa).

ABOVE: A syrphid fly, a wasp mimic using front legs as antennae. BELOW: A hawkmoth on beebalm (Monarda fistulosa).

Is that a bee? Again, we shouldn’t judge a book by its cover or assume it’s a bee because of brown/black and gold/yellow stripes.

Many insects mimic bees and wasps to avoid predators. One of the most beautiful bee mimics showed up during the BeeBlitz at the Pollinatarium this summer.

It was the bumblebee hawk moth or hummingbird clearwing moth (Hemaris spp.). They look like a bumblebee but can fly like a hummingbird. They can hover in front of a flower to get nectar, while the bumblebee always lands on the flower.

The hawk moth has scales on its wings like other moths, but only on the edges, making them look even more like a bumblebee.

Unlike other moths, they are day fliers, so they will be mixing with the bumblebees in the flower patches.

One difference you can see while they are flying is the fan at the end of their abdomen, and if you see a long proboscis (tongue) getting nectar from the flower, it is the moth.

What else is a bee mimic?

Probably the largest group of bee mimics are flies (Order Diptera — two wings). Bees and wasps have four wings, but flies only have two and a pair of halteres. They are also important pollinators.

The most common are in the family Syrphidae, also called syrphids. They have several common names: hoverflies, flower-flies and sweat bees.

There are several syrphid flies that are bumblebee mimics. Since it is hard to count the number of wings while the insects are in flight, I usually look at the antennae. Both honeybees and bumbles have elbowed antennae, and they are fairly long.

Wasps will also have long antennae. Flies, on the other hand, have stubby antennae or short paddle with a hair-like bristle on it. Check out the picture of the syrphid fly that is a wasp mimic.

The bottom part of its front legs are dark, so they can hold them up and look like long wasp antennae. The real antennae are the yellow little clubs you can see.

The little sweat “bees” that are really flies can be very annoying, but they cannot sting you. None of the flies that are bee mimics can sting you.

You can also tell it is a fly by how it flies. Like the hawk moth, it can hover and change direction quickly while flying.

Most of the adults are beneficial because they are pollinators, and some of the larvae are known to feed on aphids and other soft-bodied pests. A good group to have around.

Some sweat bees are true bees. They belong to the family Halictidae. The bees in this group are small in size and may have metallic coloring on part of their body or be dark colored and can have some stripes or yellow coloring.

They can sting but normally don’t, unless something happens, like we bend our elbows and trap them. With their smaller size, they do not hurt as much as other bees.

Take a closer look at your flower visitors. What do you see?

Dr. Lesley Deem is director and teacher at the University of Illinois Pollinatarium and Department of Entomology. For more information about scheduling a visit to the Pollinatarium virtually or in person, email lesleyd@illinois.edu.