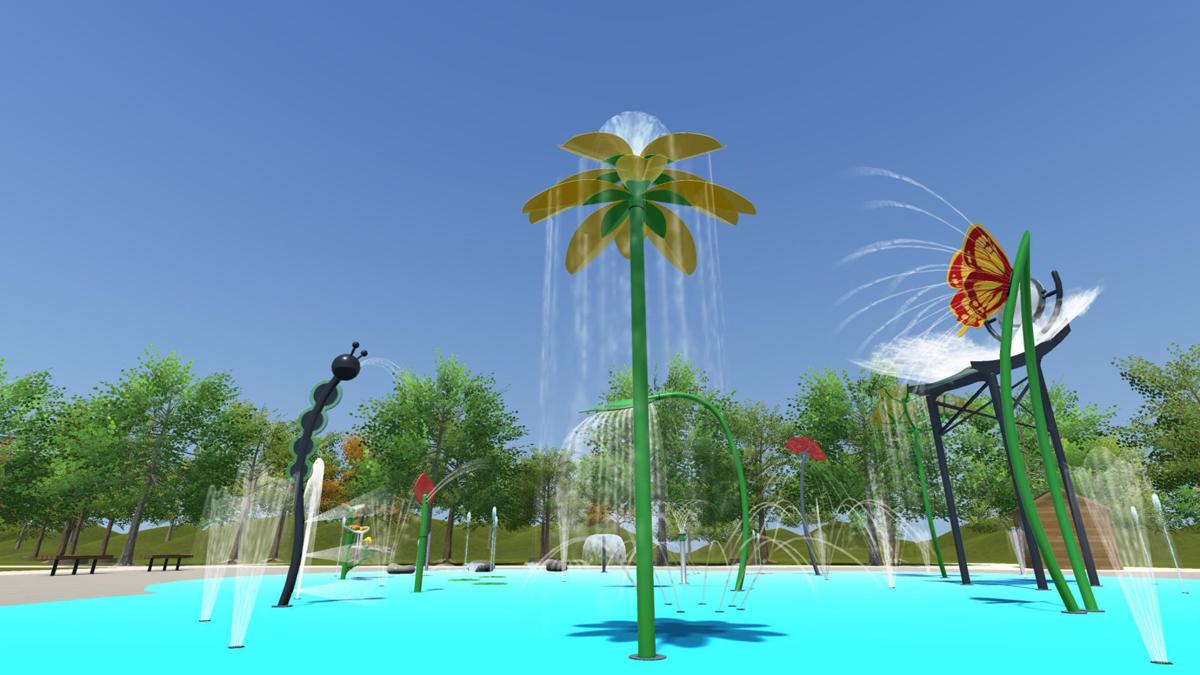 An artist’s rendering of the splash pad that will be built in Mahomet’s Barber Park.

An artist’s renderings of the playground (above) and splash pad (below) that will be built in Mahomet’s Barber Park. The playground will be all-inclusive.

An artist’s rendering of the splash pad that will be built in Mahomet’s Barber Park.

An artist’s renderings of the playground (above) and splash pad (below) that will be built in Mahomet’s Barber Park. The playground will be all-inclusive.

MAHOMET — Dan Waldinger is hoping bids can go out next month for a project in Barber Park that will include a playground, splash park and amphitheater.

The Mahomet Lions Club has come on board in a naming-rights deal for the playground, which will be usable by everyone, including those with disabilities. The club will donate $50,000 toward the project.

Waldinger, director of Mahomet Parks and Recreation, said the project will be a welcome addition to the community.

He said the Lions Club has a longstanding history with Mahomet Parks and Recreation and called it “a natural fit.”

Lions Club President George Castor said the playground will be “a wonderful addition” to the community and will “become one of the go-to places in Mahomet.”

Waldinger said an engineer’s preliminary estimate for the entire project is about $850,000.

The higher cost of building materials in the post-pandemic era is “definitely a concern,” Waldinger said. “So we’re anxious. We’re hopeful we’ll charge ahead. It just all depends until we know the exact cost.”

A $400,000 Open Space and Land Development grant through the Illinois Department of Natural Resources has been received. The department also received a grant through the Illinois Parks and Rec Association “for basically funds we could use for purchase of our playground,” Waldinger said. “There’s a program they have in partnership through Playcore that would defray the cost significantly.”

Waldinger said the contribution is normally around $74,000.

The playground will become a national demonstration site.

Waldinger hopes to break ground and do preliminary site work this fall. Most of the construction would likely occur next spring/summer with a summer completion.

The amphitheater, splash pad and playground will be located in what is now known as soccer field 1, starting in front of the existing pavilion.

There will also be additional accessible paved pathways.

The amphitheater will include a small stage area, a patio in front plus “some berming,” Waldinger said.

“The sky’s the limit, really,” he said of potential uses for the amphitheater. “We envision being able to enhance our summer concerts. There may be the ability to rent the space for other uses as well.”

Joining the Lions Club as partners in the project are Fisher National Bank, which will contribute $25,000 for the amphitheater, and Bill and Lisa Peithmann of Mahomet, who will contribute $75,000, for the splash pad.

Waldinger said there are different tiers to donate based on the capital costs of construction for each amenity.