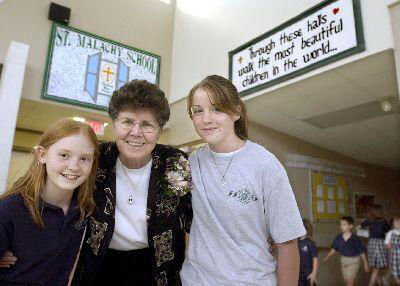 Sister Sara Koch is shown with two students at St. Malachy School in Rantoul in 2006, near the time of her retirement as principal. 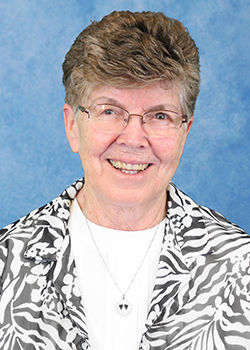 Sister Sara Koch is shown with two students at St. Malachy School in Rantoul in 2006, near the time of her retirement as principal.

RANTOUL — One person called Sister Sara Koch Rantoul’s “encourager-in-chief.” Known for calling and visiting people in nursing homes and those too ill to leave their homes, she made it a point of keeping in touch.

“Sister Sara was a deeply caring person,” said Father Joel Phelps of Rantoul’s St. Malachy Catholic Church. “She had been here for so many years. She was always asking people how they were doing, how could she help. She was a pillar in terms of the parish and the school.”

She died unexpectedly Sunday at age 79.

Her friend, Sister Paulette Joerger, said Sister Sara had been “in excellent health” although suffering from failing eyesight.

Both had been at church Sunday morning and had entered their home when Sister Sara had a medical episode.

“I think the whole town will grieve,” Joerger said. “So many people knew and loved her. She had an outreach that you wouldn’t believe beyond the Catholic church.”

A native of rural Mt. Sterling in western Illinois, she grew up on a farm — one of nine children — and spent most of her life on the other side of the state.

She retired as principal of St. Malachy School after 16 years but remained active, serving part time as the church’s parish spiritual life coordinator.

It was her second stint as principal, having served for about 10 years previously. Before that, she was director of religious education for five years.

She served 36 of her 59 years of religious profession at St. Malachy. She joined the Dominican Sisters of Springfield in 1959 and professed her vows Jan. 4, 1961, at Sacred Heart Convent, Springfield.

She also taught in Catholic schools in Springfield, Hampshire and Quincy and junior high in Decatur, Crystal Lake and Jacksonville.

Joerger said although close to 80, Sister Sara was pretty tech-savvy: “She would give me advice, ‘Here, on your cellphone, just talk into it.’”

Mary Kay Bolser said Sister Sara had a lot of connections. When Bolser moved back to her native Rantoul a couple of years ago, she told Sister Sara she was looking for a place to rent. Within an hour, Sister Sara had found a place, and they looked at it.

She said while her friend had failing eyesight, she was a good navigator when she drove her somewhere.

“She knew Rantoul-Champaign like the back of her hand,” Bolser said.

Phelps said she was a “very wise” person who had a lot of experience.

“You could ask her about anything,” he said.

Tom Iorio, who attends St. Malachy, said Sister Sara was at the church when he came to town in 1982.

“She has been a landmark in the parish and the school in my whole time here,” he said. “We were very blessed to keep Sister Sara for all those years.

“Sister Sara was as genuine of a person as far as meeting people, making you feel so comfortable, so easy to talk to on any level,” Iorio said. “She was very informed. She loved to do research on any subject matter. She got all her facts.”

Iorio said the nun also had an ornery streak.

“She loved to pull little puns on you that were harmless,” he said. “She was always greeting you with a warm smile and handshake. She was an amazing lady.”

A private Mass of Resurrection for Sister Sara was held Tuesday at Sacred Heart Convent. Private burial was planned for Wednesday at Calvary Cemetery in Springfield.

A memorial Mass will be celebrated at Sacred Heart Convent at a later date.