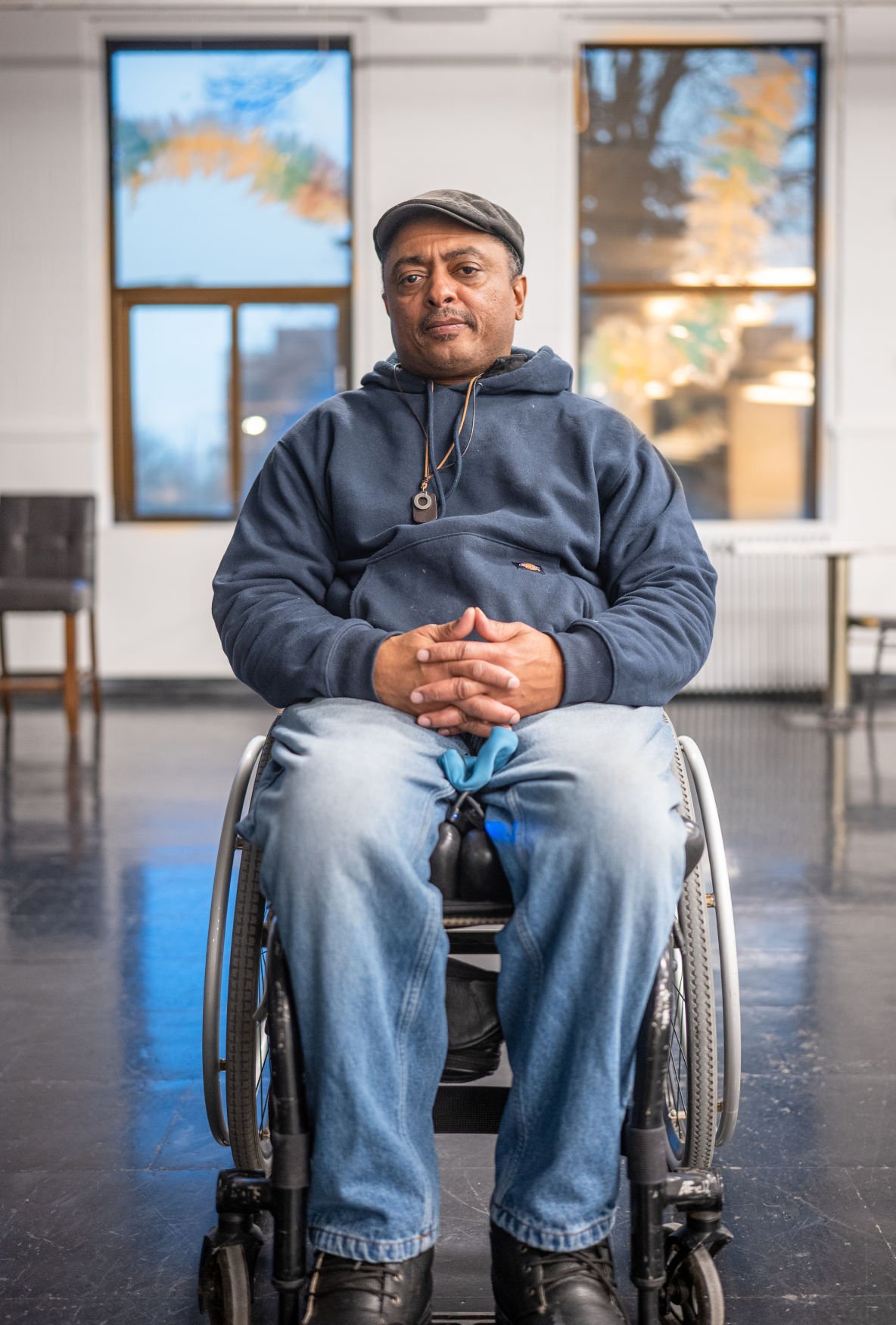 At the age of 24, James ‘Tygar’ Corbin was shot during a robbery while living in the Robert Taylor Homes, a Chicago housing project, leaving his legs paralyzed. As he helps people navigate the financial world with First Followers CU, Corbin says he is attempting to break the cycle of poverty, crime and despair that led to his near-death experience and the shootings that plague C-U. 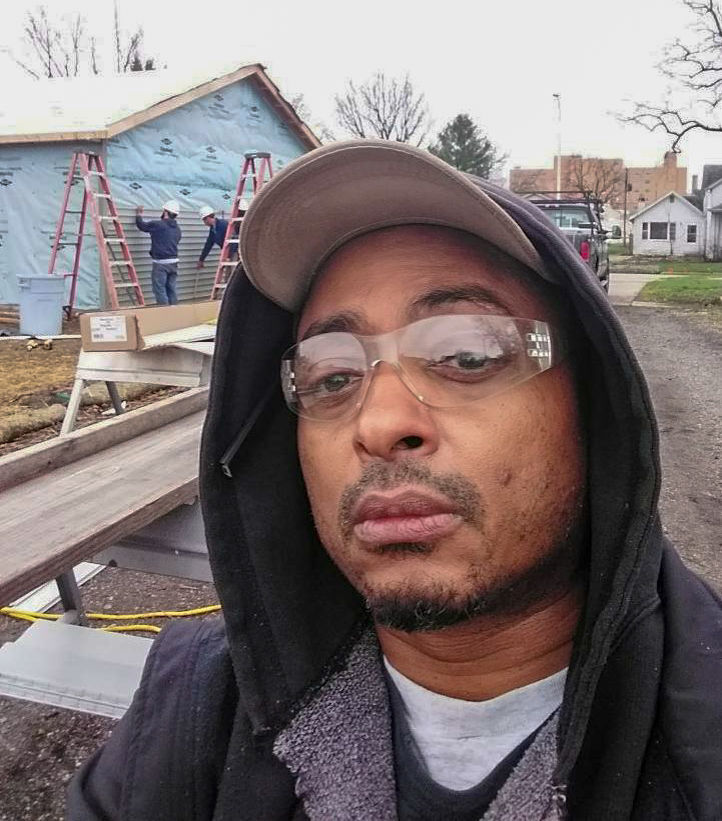 James ‘Tygar’ Corbin poses at a Habitat for Humanity of Champaign County worksite, where he went with First Follwers’ GoMAD Workforce Development and Pre-Apprenticeship Program.

At the age of 24, James ‘Tygar’ Corbin was shot during a robbery while living in the Robert Taylor Homes, a Chicago housing project, leaving his legs paralyzed. As he helps people navigate the financial world with First Followers CU, Corbin says he is attempting to break the cycle of poverty, crime and despair that led to his near-death experience and the shootings that plague C-U.

James ‘Tygar’ Corbin poses at a Habitat for Humanity of Champaign County worksite, where he went with First Follwers’ GoMAD Workforce Development and Pre-Apprenticeship Program.

URBANA — One week after he turned 24, the age at which he expected to die, James “Tygar” Corbin lay on the ground in a pool of blood at the Robert Taylor Homes, the Chicago housing project where he lived, and stared down the barrel of a gun.

Corbin counted each shot before jerking to the side to avoid the next one. Finally, the shooter, who robbed Corbin of the drugs he was selling, ran out of bullets and fled, leaving Corbin and his cousin to die, a demise Corbin had long predicted.

“I never thought I was going to live past the age of 24,” said Corbin, who is now in his 50s. “We would joke about this. I would say, ‘Don’t nobody be crying at the funeral,’ and, ‘Don’t be making dirty jokes.’ But you’re laughing in the face of death. And I had accepted that.”

Of course, Corbin didn’t die that day. After a few brutal months in the hospital in which he teetered on the edge of death, he returned home with his legs paralyzed. After years of struggle, he went on to receive his associate degree at Parkland College, his bachelor’s at Chicago State University and finally a master’s in nonprofit management at the University of Illinois-Springfield. He owned vending machines and buildings, and navigated the business world before working in nonprofits, including Habitat for Humanity.

Now, he works for First Followers CU, where among other duties, he helps connect people, many of them just out of prison, with resources and teaches them how to navigate the financial world. He’s also working on various ways of facilitating business in the Black community.

As he works to open more legal paths to financial success for those who grow up without economic resources and know-how, he said he’s left to reflect on how he, a smart kid with two loving parents, was unable to escape the cycle of poverty, crime and gun violence that plagues Champaign-Urbana today.

Growing up in the Roseland neighborhood on the far South Side of Chicago, violence and poverty were pervasive, even for a kid who grew up in a home with two parents and a father who always worked to make enough to support the family.

Once a financially successful community with jobs aplenty at the local steel mills and factories, Roseland became economically depressed when those facilities closed in the 1960s. Corbin saw despair, gang violence and poverty all around him.

While life at home was safe, venturing outside was an issue.

As he sat in a high school algebra class, he remembers, he couldn’t focus on numbers and variables, even as his teacher pleaded with him to put his obvious intelligence to productive use.

“Going to school, I’m transversing multiple gangs and several different neighborhoods trying to get to school,” Corbin said. “Then comes the job of trying to get back home. I’m thinking, ‘I’m not going to go down 35th Street today, because I know they’re down there.’

“It just becomes a survival tactic. Every day. So it’s hard to focus on school when you’re focused on, ‘I wonder if this group or organization is going to be there robbing people today. Can I get around it this way? What if I take 31st Street?’ And I still hear the teacher in the background, and I can almost see him, too, and he would say, ‘James, you’re smart, I know you know this stuff.’ But where my mind is is, ‘I know I’ve got to get home, can I walk this way and not run into this group and get robbed today or get beat up.’ It’s just a survival game.”

He attended two high schools, but at both, gang violence forced him to leave. He dropped out of high school and earned his GED. Corbin hoped to attend college, but he said his parents made too much money for him to get financial aid but not enough to afford college. So he said, he’d wait until he was 24, when he could apply for financial aid on his own. In the interim, he sold drugs, for which he was convicted of a felony, and took a few college courses.

A few years after he was shot, Corbin decided to make his first move to Champaign-Urbana, where he attended Parkland to study business.

While at Parkland, he discovered the tools he had been missing as he ventured into adulthood. Some lessons were as simple as opening a bank account rather than simply cashing checks at a currency exchange. He also learned to invest money and open a business.

“If you don’t have it in your household, it’s not going to be taught,” he said. “Economics starts in the household. But if the only thing your mom and dad is doing is paying bills and going to the currency exchange, no bank account, how do you know about this? And it’s the same problem today.

After finishing his bachelor’s degree at Chicago State, he bought vending machines and eventually houses to rent, which he lost in the 2008 financial collapse. Since, he’s learned to read the market, information he says would have kept him from losing that property.

Soon after, he decided to become involved in nonprofits. Through AmeriCorps’ Volunteers in Service to America, he worked for Habitat for Humanity International in Atlanta before winding up back in Champaign-Urbana.

In 2016, he began working for First Followers CU, an organization that began in 2015 as a drop-in center that supplied resources to formerly incarcerated individuals but now includes a job-training program and a “transition house” for people who have recently left prison.

Corbin helps set people up with bank accounts and teaches them about credit, reaches out to employers to connect them with jobs, and helps them navigate financial decisions like buying a car or finding a place to live. He said he’s worked with around 90 people, imparting upon them the knowledge that may have sent his early adulthood on a different trajectory.

“You don’t have to sell drugs, you don’t have to affiliate with gangs to” elevate yourself financially, he said. “You can do this the right way, but you’ve got to know the right moves to make. Because by the time they start making money, they’re gone. I was one of those guys. Then what?”

Corbin wants to expand his scope. He wants to teach both kids and adults how to manage their personal finances and open businesses, but he also wants to collaborate with other organizations to expand wraparound services that help people with other issues end the cycle that left him expecting a premature death.

“I’m setting them up so they can make better moves in life,” he said. “My goal is, ‘We’ve got to put these things in place for the other ones that come behind us. We’ve got to transform the neighborhood into a community.

“This is not a community. A community works together. It’s disjointed. This is just working together in silos and groups. The dream or the goal is to get this thing to work as a community.”