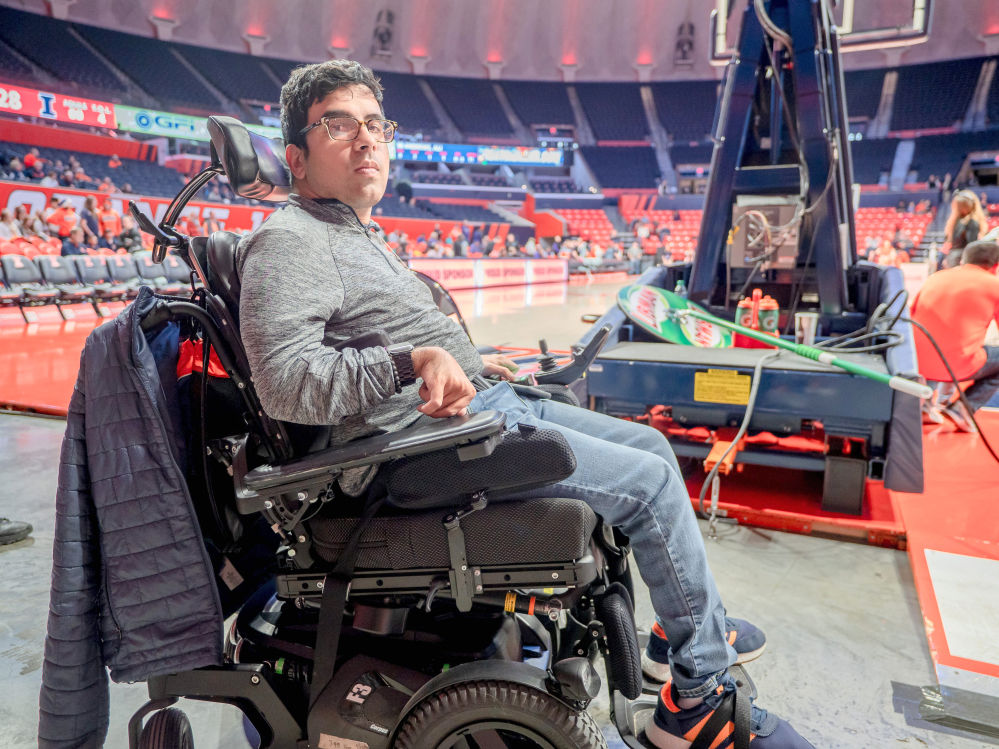 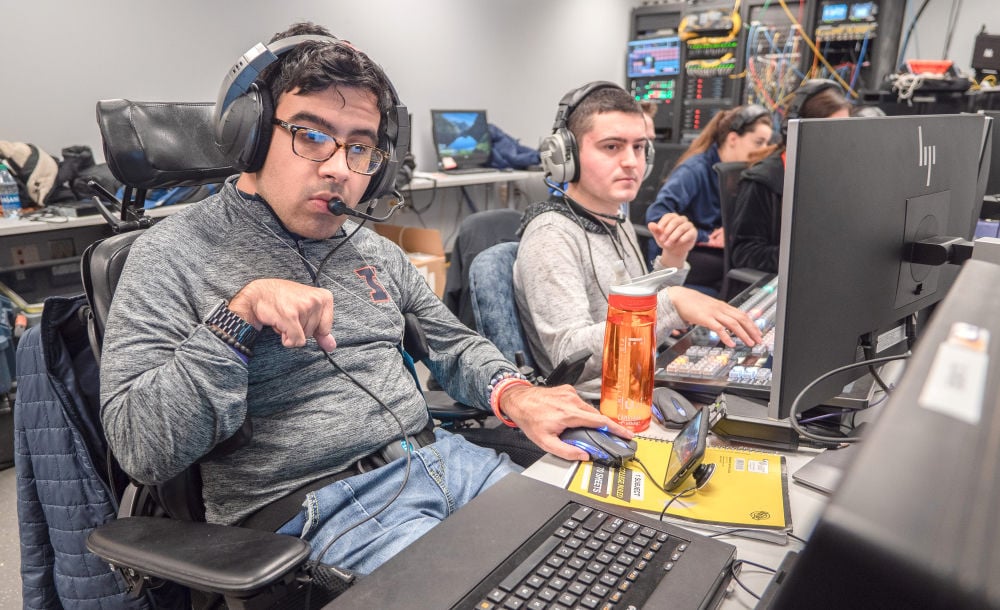 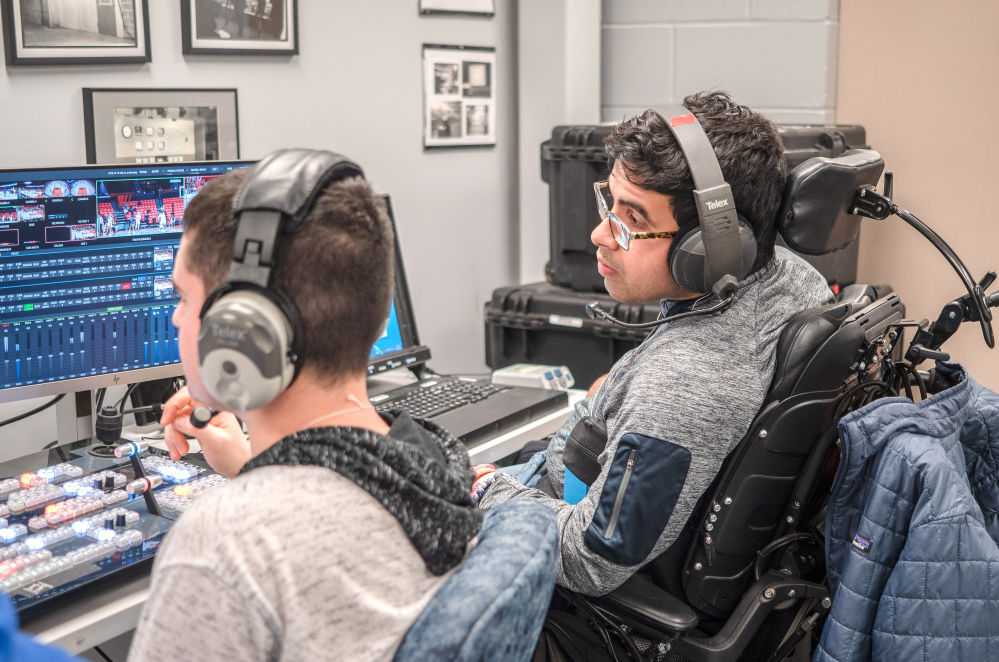 CHAMPAIGN — Zain Bando slid his motorized wheelchair in front of the computer on the edge of the table in the Big Ten Network’s small studio Sunday in the bowels of State Farm Center before the Illinois women’s basketball team’s game against Evansville.

He’s not in the middle of the control center for BTN’s Student U, where other students discuss what graphics to display onscreen and switch from camera to camera for the online broadcast. Bando is in charge of the scoreboard at the bottom of the screen. It’s a fairly simple task, but the sophomore with big dreams is in the room. He’s learning.

And for Bando, that’s a big deal.

“I’ve just tried to make it a habit that this year, I was going to work and go to as many games as possible,” Bando said.

For most of his life, Bando has used sports to open doors, even though he’s never really played them.

Bando has spastic quadriplegic cerebral palsy, meaning he has difficulty moving his arms and his legs, among myriad other difficulties. He weighed less than 2 pounds when he was born at 25 weeks. A doctor predicted he’d never be able to talk.

That prediction turned out to be ironically inaccurate. Bando has an encyclopedic knowledge of sports, and he loves to spout off about it.

After trying adapted sports at a young age, he decided he’d rather be on the sideline or watching sports on TV.

He became hooked on UFC as a 6-year-old, and his father estimates they’ve watched around 5,000 fights together. A few years later, though, he became absorbed in other sports.

“Basically I knew from a very young age that I wasn’t going to be able to play sports because of my disability,” Bando said, “so I just decided to take a bunch of action.”

If his disability created a social barrier for Bando, sports helped him knock it down.

Between the sixth and the seventh grade, he began producing his own sports podcast with a friend. His dad would set him up on his couch in front of his laptop and leave the room.

“He’s a pretty techie guy, so he figured the rest out,” Matt said. “I really can’t take credit for anything. All I had to do was get the laptop open and in front of him and, ‘Bam,’ he was going.”

After some prodding from a gym teacher who saw a spark in Bando, he was on the microphone as a PA announcer at middle school volleyball games, a position that didn’t previously exist. As a freshman at Downer’s Grove North, he independently decided to commentate on the online broadcast of freshman football games.

He noticed he couldn’t find scores of his high school’s football games, so he offered to run the team’s Twitter account. He did the same for the basketball team, for whom he became a manager. As a senior, he became the editor of his school’s newspaper.

“He created it all from scratch,” said his mother, Saba. “It gave people a chance to get to know him differently. I think it got people to know him and his unique flavor that he brings to the table.”

“It helped people know him and he loved to be in the mix.”

“When he is in the sports arena he is at your level,” Thomas said. “Obviously, he has restrictions to what he can do, but that’s part of what I love about him, is that’s never hindered him on what he wants to do in the sports arena.”

When he arrived at Illinois, where he attended a sports journalism camp during summers throughout high school, he immediately dove into the broadcast world. He became a contributor to Rollin’ Illini, a show on student-run WPGU that discusses adapted sports, and took on spot duty with the Big Ten Network.

His role increased this year, and he now covers multiple games each week. And while his job is simple, he hopes to move to more complicated jobs in the years ahead.

“It’s a really easy job to get your feet wet into,” he said. “It’s a been a wonderful experience.”

His goal is to someday cover professional sports in some form. Still, for someone with disabilities like Bando’s, the future is uncertain. Things that most people consider everyday tasks, like eating, opening doors or using the restroom, become constant stumbling blocks. He’ll likely need to hire an aide in order to live independently, which may or may not be financed by the government.

That’s something he and his parents will spend the next few years figuring out.

For their part, Saba and Matt have tried not to limit their expectations for their son with preconceived notions. They’ve even broached the topic about moving elsewhere if Zain had an opportunity too good to pass up.

“If we didn’t show a lot of faith and being open to possibility, then it would be kind of ridiculous for him to think that,” Saba said. “I don’t think any possibility is off the table, but I think that would take some time and attention to see what (Zain living independently) would look like.”

Throughout high school, Bando endeared himself to local media with his fastidious reporting at Downer’s Grove North football and basketball games, and he wound up appearing in several news stories.

During February of his senior year, his family settled in to watch a story on WGN about him, when his father heard him say something on TV that he never heard him express in person.

“I know I have specific differences from other people,” he told WGN, “but at the end of the day, it’s just finding that balance to do what I need to do to be successful in my own life. With me having a disability, sports has become my way to find some peace and pretty much forget about everything else that may be different about me.”

Zain Bando has lofty goals for his broadcasting career. But at its core, his love for sports has helped him break barriers in a life full of them.

“I never heard him express that,” his dad said of the WGN interview. “It hit me hard in a good way, but it hit me. Like, ‘This is what I’ve got to work with, and this is what allows me to be involved even though I’m in this wheelchair.’ He never complains. He may get frustrated once in awhile, but he never complains