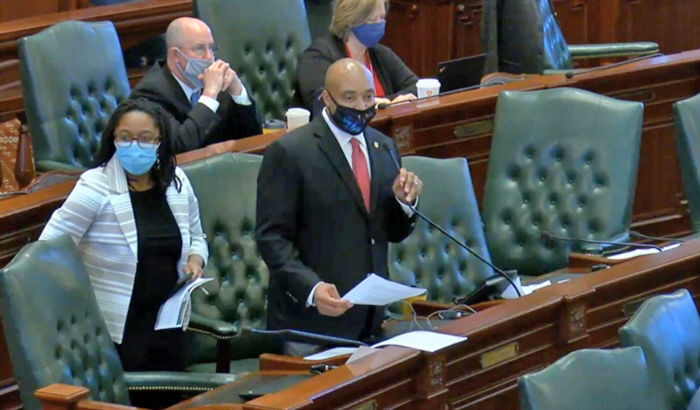 ABOVE: Chicago Democratic Rep. Justin Slaughter introduces a bill during the holiday weekend session that would outlaw the use of deceptive interrogation techniques on minors. BELOW: Rep. Marcus Evans, D-Chicago, introduces a bill to lower the small trailer license fee from $118 to $36. 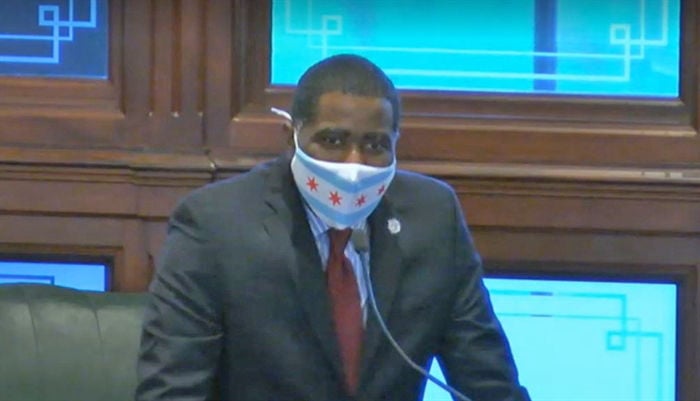 Rep. Marcus Evans, D-Chicago, introduces a bill to lower the small trailer license fee from $118 to $36.

ABOVE: Chicago Democratic Rep. Justin Slaughter introduces a bill during the holiday weekend session that would outlaw the use of deceptive interrogation techniques on minors. BELOW: Rep. Marcus Evans, D-Chicago, introduces a bill to lower the small trailer license fee from $118 to $36.

Rep. Marcus Evans, D-Chicago, introduces a bill to lower the small trailer license fee from $118 to $36.

SPRINGFIELD — Lawmakers are considering an omnibus elections bill that would push back the date of the 2022 primary elections amid other major changes to the state’s election code.

It was filed Sunday night, and it passed through a House committee on a partisan roll call. Shortly after committee, Republicans requested an immediate meeting of their caucus when the measure came up for a floor vote. The bill passed 72-46 in the House Sunday night, sending it to the Senate.

The 156-page omnibus bill, an amendment to Senate Bill 825 filed by Rep. Maurice West, D-Rockford, would also strengthen the state’s cybersecurity surrounding elections and make Election Day a holiday among other provisions.

The dates for nominating petitions for primaries would also change, with those seeking office being able to circulate petitions starting Jan. 13. Congressional and judicial candidates must have petitions filed by March 14.

The bill would also make the date of the general election, Nov. 8, a state holiday in 2022. It will be considered a legal school holiday, and any schools closing due to the holiday would “be made available to an election authority as a polling place for 2022 General Election Day.” This provision would also expire at the start of 2023.

Mail-in-ballots. One provision would also create a permanent vote-by-mail list.

The legislation would have voters who apply to be on the list remain on it until they request to be removed, change their registration or register to vote in another county.

The bill also tasks the Illinois State Board of Elections with looking into the possibility of electronic vote-by-mail for voters with disabilities. By the end of 2021, ISBE must submit legislation to the General Assembly creating a method for disabled voters to independently and privately mark a ballot using assistive technology.

Cybersecurity. After high-profile cybersecurity breaches involving ISBE and the attorney general’s office, the bill would also require election authorities to beef up cybersecurity measures including monthly vulnerability scans, risk assessment every two years and use protection from the Department of Innovation and Technology or a third-party vendor within one year of its passage.

Here’s a recap of other legislation that advanced in the late stages of the session, which was extended well past midnight Monday:

Trailer license feesThe House passed a bill that would lower small trailer license fees from $118 to $36, which lawmakers said could remedy an issue that has resulted in an uproar of complaints from their constituents.

In 2019, lawmakers raised the fee for licensing a small trailer in Illinois from $18 to $118 as part of Gov. J.B. Pritzker’s Rebuild Illinois capital infrastructure plan.

Senate Bill 58, sponsored by Rep. Marcus Evans, D-Chicago, lowers the annual fee to a compromise $36, along with removing a $10,000 cap on sales tax credits on vehicle trade-ins.

Both of these proposals were held up in the House Revenue and Finance Committee as lawmakers worked on a compromise.

Stuart and Bourne’s bills would have lowered the fee back to the previous cost of $18. But the Transportation for Illinois Coalition — a group of statewide and regional business, organized labor, industry, governmental and nonprofit organizations which lobbied for the capital bill’s passage in 2019 — warned that lowering the fees would take revenue away from state construction projects.

“I think this is long overdue as a correction,” Bourne said on the House floor. “I wish it was down to $18, but we can’t get everything we want in this building. Hopefully, this helps everyone who has gotten calls about the trailer fee.”

Bourne also clarified with Evans that individuals could keep their same license plate and simply renew it under the bill.

SB 58 also restores the full credit trade-in rates that had been capped at $10,000. It passed unanimously out of the House and returned to the Senate for concurrence.

Public-school changesA bill to phase out the use of isolated timeouts and prone physical restraint in public schools will soon be sent to Pritzker.

The Illinois House voted unanimously to concur in changes the Senate made to House Bill 219, which include putting a virtual halt to the practices starting in the 2022-23 school year. The bill was prompted by a 2019 investigative story by the Chicago Tribune and ProPublica that documented how extensively schools had been using the practice for decades.

Rep. Jonathan Carrol, D-Northbrook, the lead sponsor of the bill in the House, said he had worked the last 18 months to get the bill through the General Assembly.

He had noted previously that he was a victim of seclusion and restraint practices when he was in school and that he still lives with the memory of those events.

The Division of Mental Health of the state’s Department of Human Services is “preparing to provide mobile mental and behavioral health services to all Illinoisans as part of the federally mandated adoption of the 988 phone number,” according to the bill.

The number is expected to go online by July 2022.

House Bill 2784, sponsored by Rep. Kelly Cassidy, D-Chicago, creates the Community Emergency Services and Support Act requiring 911 call center operators to coordinate with the mobile mental and behavioral health services to be established by the Division of Mental Health.

HB 2784 advanced out of the House unanimously, and only requires the governor’s signature to become law.

If it is signed, call centers and emergency services would be required to comply with a series of state goals and prohibitions outlined in the law once DHS and the regional committees have protocols in place and no later than January 2023.

Over-the-counter contraceptivesHouse Bill 135 passed the House Sunday after clearing the Senate Friday. Under the bill’s provisions, qualified pharmacists, starting in January 2022, will be able to prescribe and dispense a 12-month supply of hormonal birth control.

HB 135 passed in a partisan 70-44 vote, with Republicans opposing the legislation due the lack of age limit or requirement of parental consent for minors receiving birth control through a pharmacist.

It can become law upon signature from the governor.

The Illinois Association of Chiefs of Police said the bill 'addresses many of our serious concerns with the SAFE-T Act, and law enforcement will be much better off with these changes.'