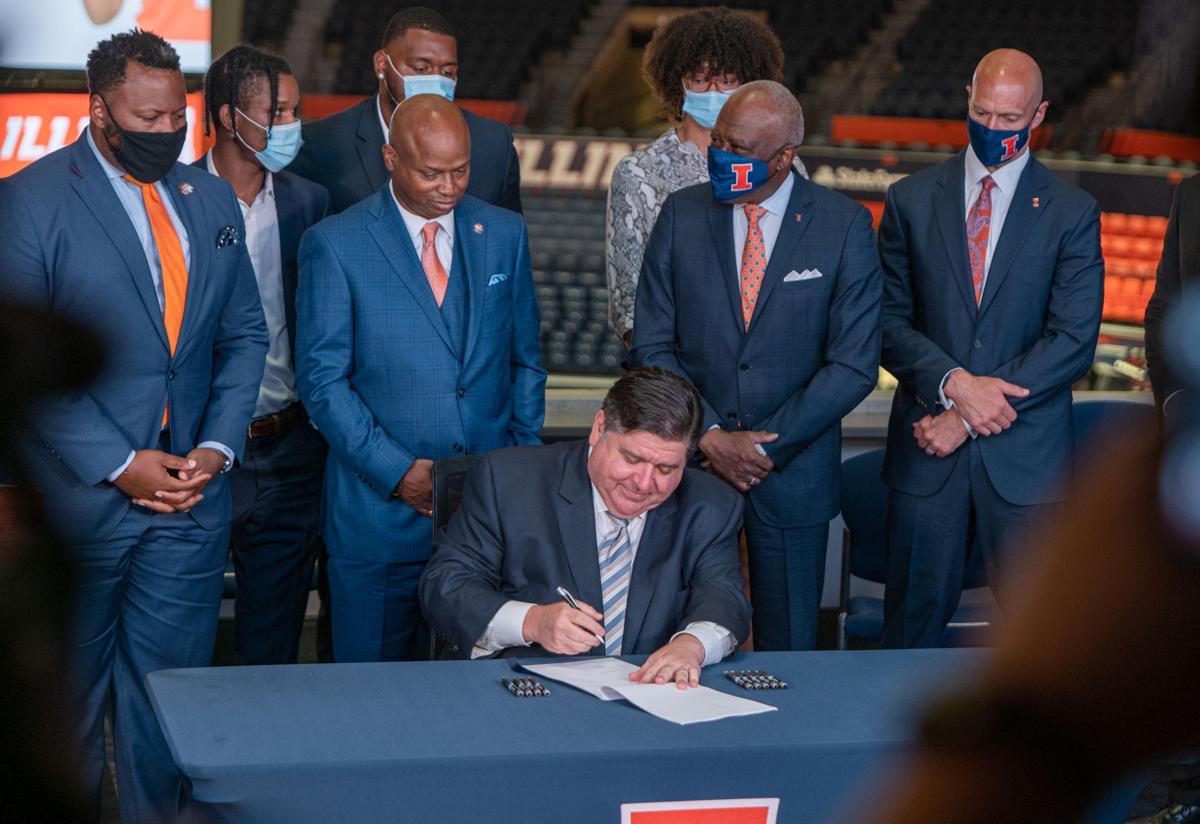 Gov. J.B. Pritzker signs a bill that allows college athletes in the state of Illinois to profit off their name, image and likeness on Tuesday at State Farm Center in Champaign. 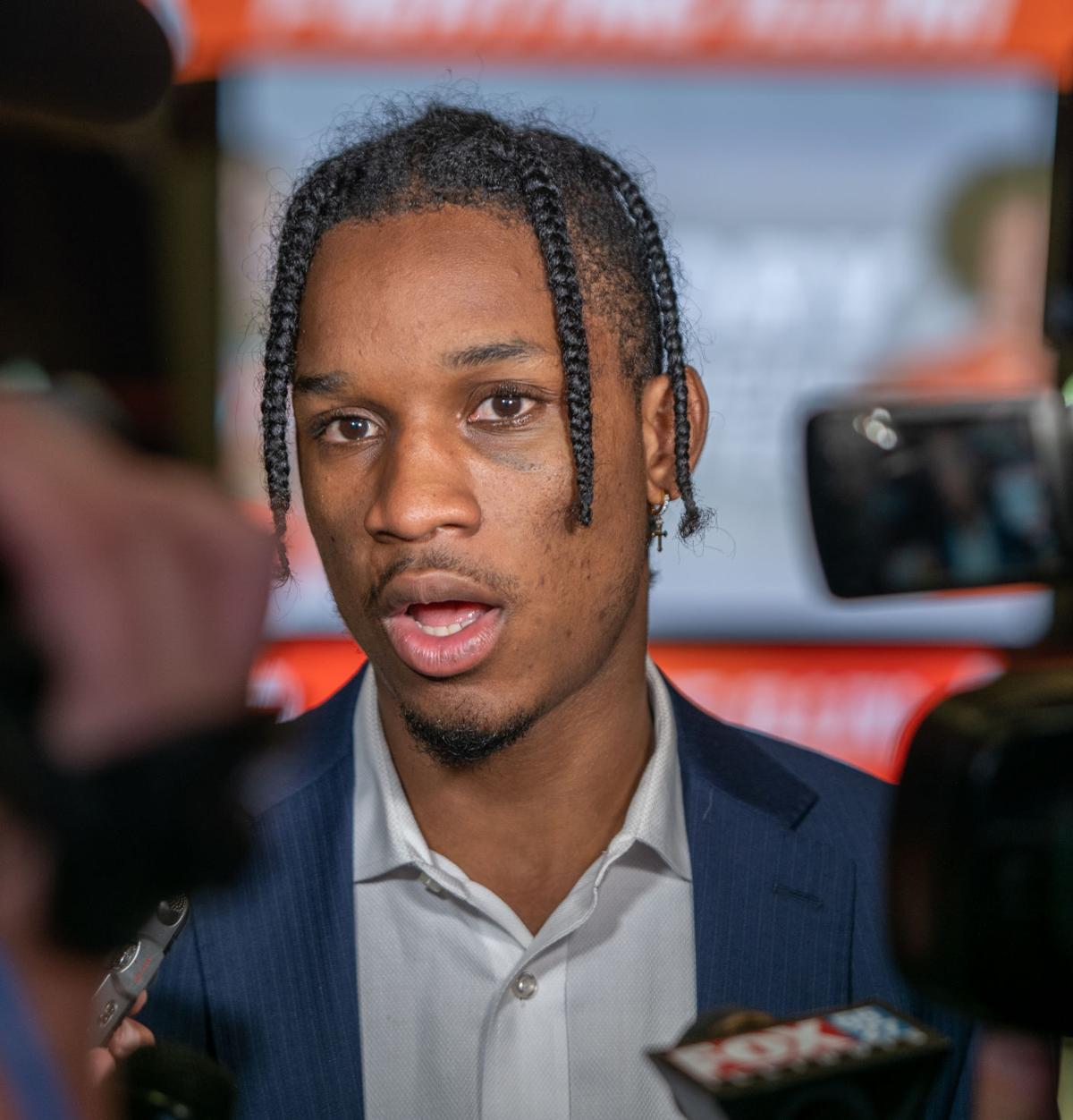 Illinois men’s basketball player Trent Frazier speaks at Tuesday’s event at State Farm Center after Gov. J.B. Pritzker signed a bill that allows college athletes in the state to profit off of their name, image and likeness. 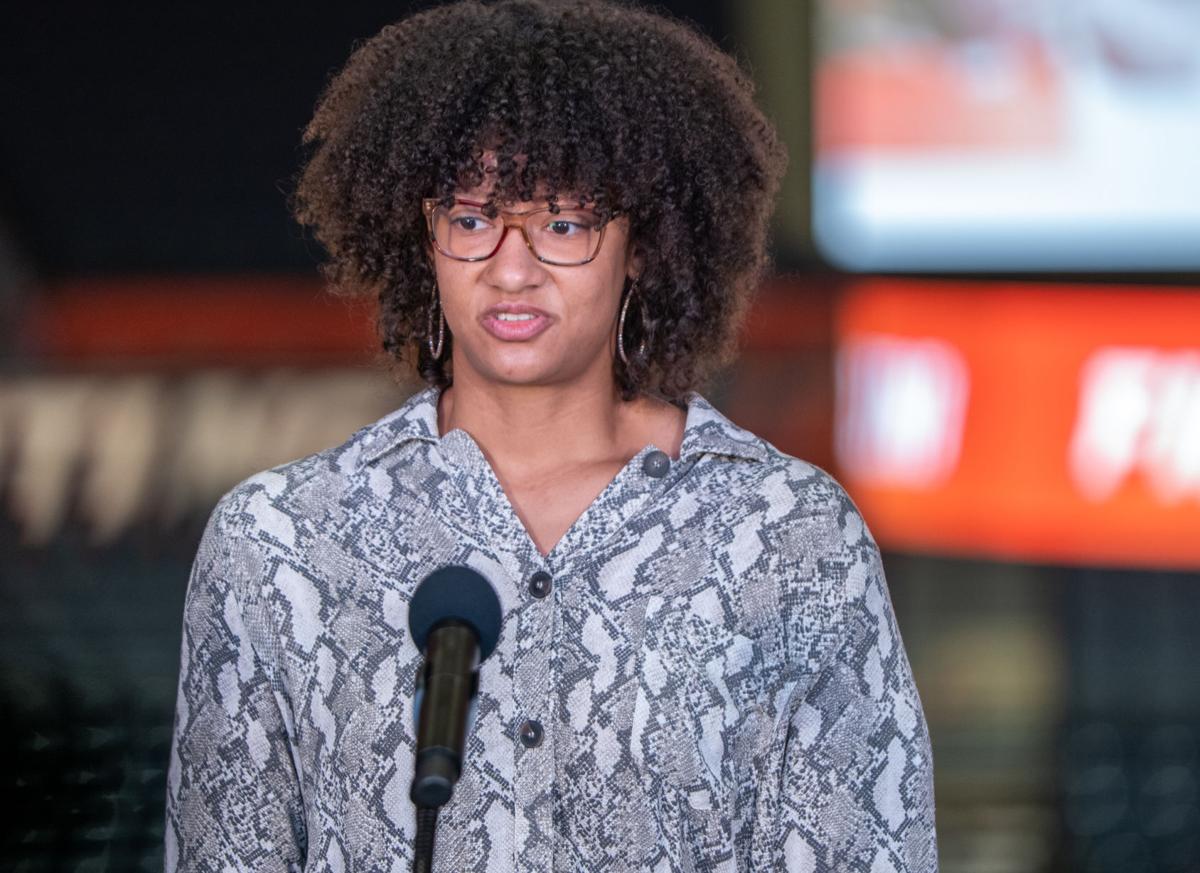 Gov. J.B. Pritzker signs a bill that allows college athletes in the state of Illinois to profit off their name, image and likeness on Tuesday at State Farm Center in Champaign.

Illinois men’s basketball player Trent Frazier speaks at Tuesday’s event at State Farm Center after Gov. J.B. Pritzker signed a bill that allows college athletes in the state to profit off of their name, image and likeness.

CHAMPAIGN — He’s a sniper from deep with a quick first step, a Big Ten defensive pest and a former Freshman of the Year.

As Illini guard Trent Frazier returns for his fifth year of eligibility, he’s adding one more nugget to his resume: “I’m a businessman now.”

College athletes in Illinois can start profiting off of their names, images and likenesses starting Thursday.

For the last two weeks, Frazier’s Twitter feed has anticipated the July 1 effective date of the new law, calling for interested businesses to “hit his DMs.”

How many businesses have messaged him so far?

“A lot,” he told reporters inside State Farm Center on Tuesday.

“I wanted to take full advantage of this opportunity and use it, not take it for granted,” Frazier said.

“With this being my last year, I want to make the most out of it and obviously take care of my family,” he said.

Some early prospects for the 22-year-old guard: Cameo, a digital platform where fans can pay Frazier to record video messages for friends and family, and Yoke Gaming, where users can video chat the athlete while teaming up in a video game.

“I’m a big gamer, so I’m going to be streaming, trying to have a good time with some younger kids, playing with them every once in a while,” he said. “I’ve been trying to get myself ahead of everyone else.”

Frazier and a handful of other Illini attended Gov. J.B. Pritzker’s historic bill-signing Tuesday, which legally realized the ability of college athletes at public and private universities in the state to profit off their name, image and likeness.

Beyond some content restrictions, student-athletes and their agents will have a broad amount of control over the deals they sign. They’ll still have to inform their schools of what businesses they’re partnering with.

To do this, the UI’s Department of Intercollegiate Athletics is partnering with the Opendorse app, an endorsement platform for athletes, where players can register their deals, connect with new brands and evaluate their social-media presence.

Eva Rubin, a senior center on the Illini women’s basketball team, has used her platform to speak about her management of Type 1 diabetes. She said the new law gives Rubin the chance to broaden her impact on diabetes research and awareness with endorsements.

“There’s more to us than the sport you see us play on TV. We all have a different niche. We all have a different hobby that’s important to us,” Rubin said. “I’ve had many opportunities to work with diabetes research foundations. Now with NIL being passed, I can only imagine the opportunities I’ll be able to create for myself and build for myself.”

The nation is grappling with the issue at a quickening pace. On Monday, the NCAA’s Division I council voted to give all athletes interim name/image/likeness provisions until new NCAA or federal rules are adopted, pending a board vote today.

Twelve other states have passed legislation of some kind, though none of those take effect at the start of July.

“With the lack of direction, what we began to see emerge was a patchwork of state-by-state approaches that resulted in a range of legislation that makes the landscape confusing to our student-athletes and one that could quite possibly put their careers and their education at risk,” UI Chancellor Robert Jones said on Tuesday.

The hope among administrators and legislators is that Illinois’ new law will provide a recruiting boon for athletic programs at state schools.

“We do look at this as a true opportunity to keep our premier prep athletes in Illinois,” said state Rep. Kam Buckner, D-Chicago, a former Illini football player who sponsored the law. “We want them to stay here, and we want other folks to actually come here.

For current student-athletes, some financial flexibility and security is a huge plus.

“I want to be able to have some money in my pocket where I can give it to my parents,” Frazier said. “I’m just trying to set myself up for after this until I can see what my next step in life is.”

Vederian Lowe, an offensive tackle on the football team, said while he hasn’t “put too much thought” into the types of deals he might wade into quite yet, the chance to help his family’s future “means everything.”

“I have two children, my brother, I have a family already at 22,” Lowe said. “It’ll help me put my family in the best position possible, because I can take over that role of provider.”

Signing of the times: Frazier booked for Hoopeston autograph event

Illini standout: 'It’s very exciting to secure one of the first major autograph deals in the community. Especially with Illini Nation being all around, being back in person with families, kids and fans, having them here to support me.'

University can't be 'matchmaker' between brands, businesses and athletes but can foster relationship at both ends