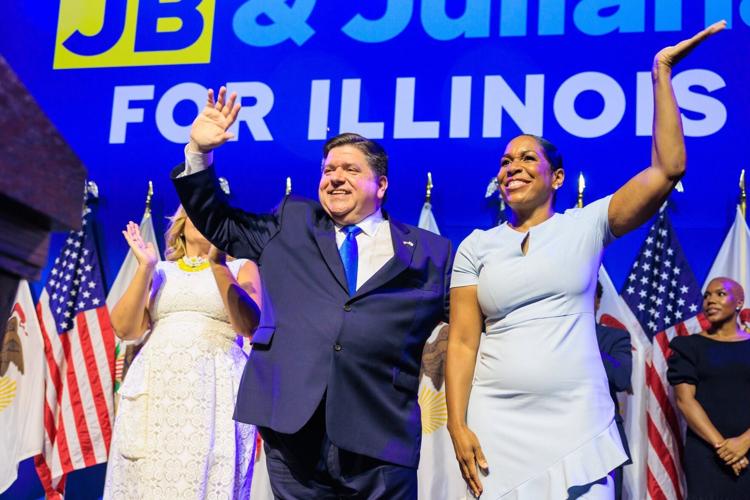 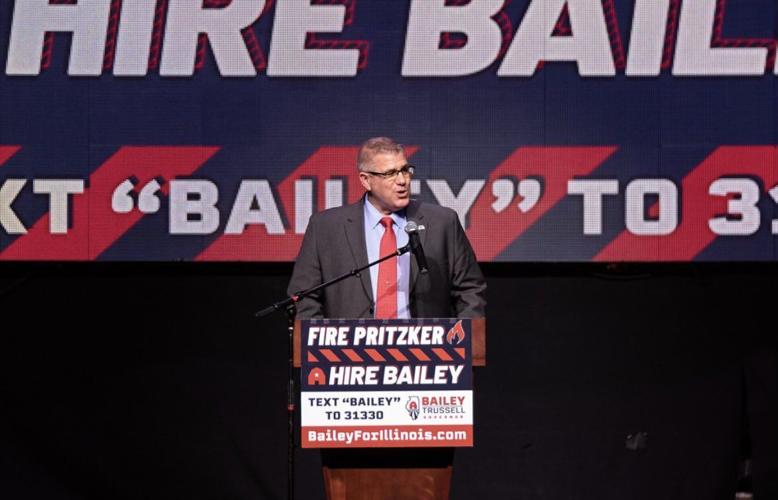 SPRINGFIELD — Inflation, crime, pandemic response, abortion rights and Donald Trump are all set to be major issues in the 2022 race for Illinois governor, if the winning candidates’ election night speeches are any guide.

A farmer and state senator from downstate Xenia who acknowledged to the Chicago Sun-Times last week that he is a millionaire, Bailey received the endorsement of Trump and coasted to an election night victory with 57 percent of the vote, compared to about 15 percent for each of the next two closest competitors.

“He doesn’t understand how his and Joe Biden’s extreme national agenda helps fuel inflation and increases utility bills for families like us across Illinois,” Bailey added of the governor. “He doesn’t understand the damage that his lockdowns did to small businesses, schools, mental health and working families all across this state.

“He doesn’t understand that his war on police has fueled the war on our streets, making our neighborhoods dangerous all across this state.”

Bailey also said in his speech that he entered politics because he was displeased with his local representatives’ votes to end a historic two-year budget impasse in 2017 by raising the income tax rate to 4.95 percent, a level slightly lower than it was when the impasse began two years prior.

The income-tax vote was part of the budget package that saw Democrats and Republicans come together to override the veto of former Republican Gov. Bruce Rauner.

Pritzker, meanwhile, considers it part of his first-term legacy that Illinois has left the politics of the impasse behind it and taken strides to balance the budget each year and pay down old debt.

The governor sat for an interview with Capitol News Illinois Thursday amid a two-day blitz in which he spoke with political reporters from across the state.

He said fiscal prudence — along with pandemic-era revenue spikes that were seen nationwide for many reasons — allowed him and lawmakers to pass $1.8 billion in tax relief this budget year, some of which took effect Friday.

It included a one-year suspension of the 1 percent grocery tax, a six-month delay on a 2-cent motor fuel tax hike, a 10-day partial sales tax holiday on back-to-school items from Aug. 5-14, a permanent expansion of the earned income-tax credit, an additional $300 in property tax credit, and direct payments to Illinoisans at $50 per person and $100 per dependent child.

“Those are all things that we Democrats did and were able to do because Democrats balanced the budget, Democrats eliminated the bill backlog, Democrats got the credit upgrades for the state,” he said, referring to double upgrades the state has received from the three New York bond-rating agencies in the past year.

“You can’t do any of those items of tax relief if you don’t have the dollars to do it,” he added. “And we had surpluses and what did we do? We provided relief to working family. And we’re gonna look to do that going forward. I might add, if you keep on the path that Democrats have set, that I’ve set, balancing budgets and having surpluses, we can do much more.”

He said he’s hopeful to continue balancing the books even though the state expects revenues to slow as pandemic-driven spikes normalize.

Pritzker touted the state’s use of unexpected revenues for one-time purposes, such as putting $1 billion in the budget stabilization fund, funding pensions $500 million above what is required in law and paying down old health insurance bills amounting to about $900 million.

He also noted the state has, under his watch, increased investments in the Illinois State Police, crime labs, expressway cameras, and youth violence intervention programs.

The one-term incumbent who unseated Rauner with a 16-point victory in 2018 also touched on his spending in the Republican primary in recent months.

While he spent money through his own campaign committee, the Democratic Party of Illinois and the Democratic Governors Association to knock Bailey’s chief primary rival, Aurora Mayor Richard Irvin, he downplayed the role his money played in that election.

Irvin’s camp has pegged the combined spending of those entities in the GOP primary at roughly $36 million.

“My message is a general election message against all of the Republicans,” he said. “You know, we had messages about the candidate who was talking about corruption in Illinois, when he himself was involved in corruption.

“We had messages about the candidate who is truly extreme on every issue, including choice. And, you know, we’re fighting the Republicans, this is about Democrats beating Republicans.”

In the coming days, Pritzker said he will call lawmakers back to Springfield for a special session to secure abortion rights, which could include increasing the number of medical professionals who can perform abortions. It will not include providing state aid for people traveling to Illinois to receive an abortion, he said.

In terms of a second-term agenda, Pritzker said continuing the fiscal practices of his first term, as well as increasing subsidies for education and child care are among his priorities.

“But I think that looking back at my first term in office, gives you an idea that we’re gonna get more big things done, and they’re going to be about lifting up working families,” he said.

Capitol News Illinois is a nonprofit, nonpartisan news service covering state government that is distributed to more than 400 newspapers statewide. It is funded primarily by the Illinois Press Foundation and the Robert R. McCormick Foundation.