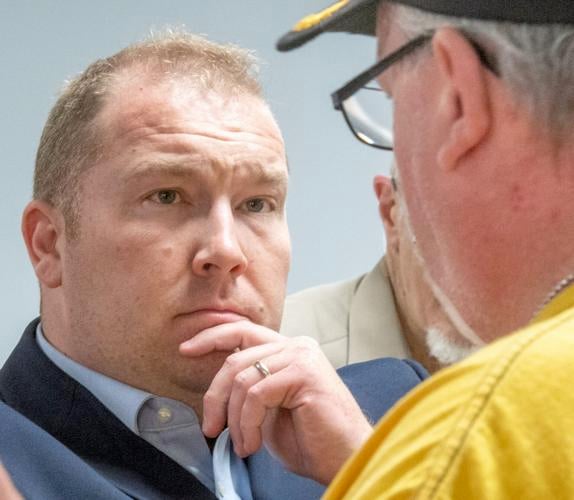 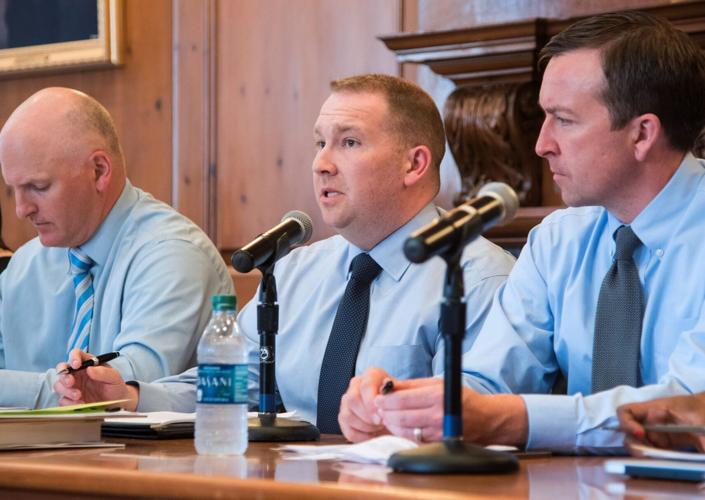 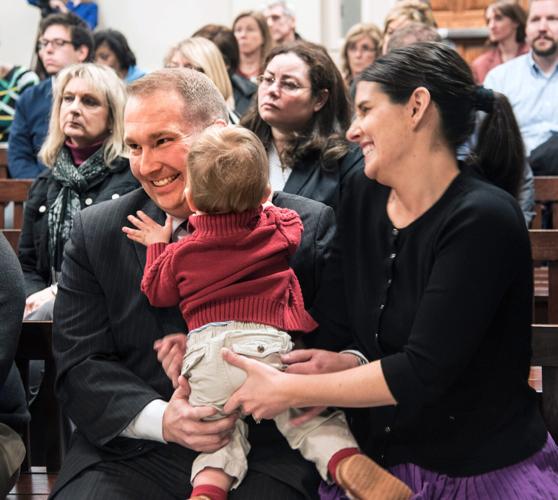 Scott Bennett hands son Sam back to his wife, Stacy, as he is introduced at his swearing-in ceremony to be the new state senator of the 52nd District on Monday, Jan. 12, 2015, at the Champaign County Courthouse in Urbana. 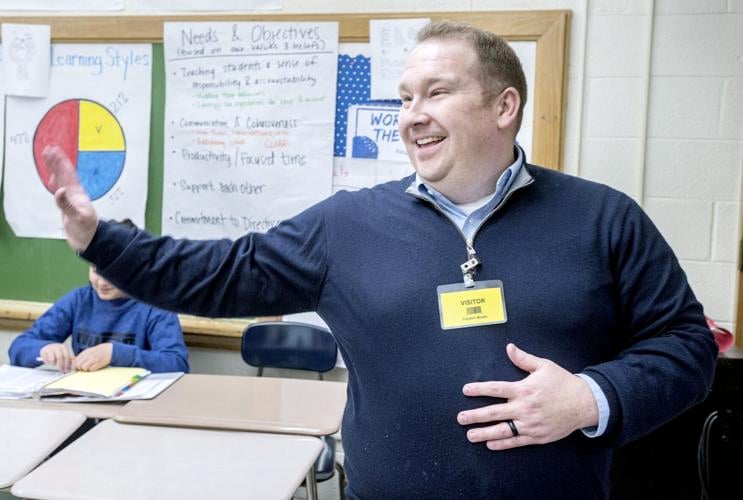 Scott Bennett hands son Sam back to his wife, Stacy, as he is introduced at his swearing-in ceremony to be the new state senator of the 52nd District on Monday, Jan. 12, 2015, at the Champaign County Courthouse in Urbana.

CHAMPAIGN — State Sen. Scott Bennett is being remembered as the guy who knew how to lighten a mood while getting things done for others.

“Everyone knows him to be a genuinely good human being, honest, dedicated, concerned, self-deprecating, funny,” said Champaign County State’s Attorney Julia Rietz, who hired Sen. Bennett to work in her office as a prosecutor in 2012. “He was the funniest person you could ever meet, with a sarcastic dry sense of humor that he turned on himself all the time. He really wanted to make a difference in our community. He did."

“If you knew Scott Bennett, you knew he was going to bring laughter into the room, even in a serious setting but only at an appropriate time,” said Jim Spiros, Sen. Bennett’s boss at Spiros Law in Champaign, where the Champaign Democrat had worked for about the last six years.

“Scott had a big laugh and an even bigger heart,” said state Treasurer Mike Frerichs of Champaign, whose election to that post in 2014 was the catalyst for Sen. Bennett being appointed to Frerich's 52nd District seat in January 2015.

Sen. Bennett died at 1:15 p.m. Friday at Carle Foundation Hospital in Urbana from what his wife, Stacy, described as complications from a brain tumor. His death came some 34 hours after first responders had been called to their Champaign home about 3 a.m. Thursday.

A shocked Stacy Bennett expressed gratitude for his end-of-life care at Carle and asked for privacy for their family.

“Scott will forever be known for being an extraordinary father, husband and friend. His quick humor and wit could light up any room he entered," she said in a statement. "We will miss his stories, the way he could always make people laugh and his genuine kindness."

The couple has twin children, Emma and Sam.

A native of Gibson City, Sen. Bennett got his undergraduate degree in history from Illinois State University, then attended the University of Illinois College of Law, graduating in 2002.

He worked in private practice in Urbana before taking a prosecutor position in McLean County for several months in late 2011 and early 2012.

Wanting to get back to Champaign County, he applied for a position in the Champaign County State’s Attorney’s Office and was hired in May 2012 by Rietz, a fellow Democrat who was worried that the aspiring politician might want to run against her.

“I met him right after he started getting involved in politics and ran (in 2010) for county board against James Quisenberry and lost spectacularly,” Rietz said. “I was somewhat concerned he would try to run against me. We met and discussed that. He assured me that would never be the case, and from then on, we were great friends.

“He was a fantastic prosecutor. He really, really cared about the victims and his cases, particularly the child victims," she said. "He would meet with his child victims weekly and just sit in the conference room and play board games and not talk about the traumatic event that had brought them to him. This was before he had children, something he came up with to connect with these kids, to get them to trust him."

That care continued after he left the prosecutor’s office. She noted that Sen. Bennett was an active court-appointed special advocate, offering support as a volunteer to children in abuse and neglect court cases.

Frerichs called Sen. Bennett a “loving husband, devoted father and, to me, one of my closest friends.”

“He fought for people as an assistant state’s attorney and continued to fight for people as an Illinois state senator," Frerichs said. "He was not afraid of the difficult issues and there was no challenge too big for him to tackle. He made friends easily, understood the value of hard work and was quick with words of encouragement at just the right time.

“Certainly, he learned these truths from his family, which dates back five generations in East Central Illinois,” Frerichs said.

Sam Rosenberg, a Chicago attorney who first met Sen. Bennett when both of them worked as new lawyers in Champaign County, called his friend “one of the most genuine people I ever met.”

“He was a true gentleman, who even before he got involved in politics was serving his community,” said Rosenberg, recalling that Sen. Bennett served on the board of the Urbana Free Library.

“He was working to keep family farms in families in Gibson City, going above and beyond to help build the fabric of central Illinois,” said Rosenberg, who talked with his friend at least weekly.

“No matter how busy he was, he would always make time to call you back. The guy dealing with the most important legislation in the state would call me back,” Rosenberg said.

“It’s a tremendous and unexpected loss,” said state Sen. Jason Barickman, R-Bloomington. “My heart pours out for his family.”

“The impacts that he has made as recently as just last week were unprecedented," Barickman said. "He has continuously been a common-sense voice of reason from the Democratic side of the aisle at a time in politics when that is sorely needed."

Rietz, who worked hand-in-glove over the last several weeks with Sen. Bennett to craft the recently passed amendment to the controversial SAFE-T Act, said her friend took criticism from friends and colleagues in both law-enforcement and social-justice circles.

“He wanted to do the right thing and create something that would work for everyone," Rietz said. "Scott understood the way to get things accomplished was to work with everyone involved, with all sides, all concerns, to follow the ethical obligation of the prosecutor to do justice."

Mike Ingram, chair of the Champaign County Democratic Party, called Sen. Bennett “one of the best people I’ve ever known in my entire life.”

The mayors of both Champaign and Urbana said they relied heavily on Sen. Bennett and expressed condolences to his family.

Marlin called Sen. Bennett “the sort of person we long for in public office.”

“He had a delightful sense of humor, the ability to work with people and politicians across the spectrum and a pragmatic approach to the legislative process,” she said. “His legal expertise, coupled with his life experience and integrity, made him perfect for his role as state senator.”

Marlin recalled attending a 2015 forum showcasing those vying for appointment to Frerichs’ senate seat representing a district that includes the most populous cities in Champaign and Vermilion counties, including Champaign-Urbana, Rantoul, Savoy, Danville, Tilton and Westville. Sen. Bennett, she said, stood out for his ability to navigate both counties, and “that proved to be very true.”

“What made him such a standout public servant was his presence in the district. He showed up, listened to his constituents and did the work,” Marlin said. “You would find him across the table, in the audience at the meetings and on the Senate floor working to find solutions. People felt a personal connection with Scott, and the only way you could develop that is one conversation at a time.”

‘I considered Senator Bennett a friend,” she said. “He was someone I was in contact with regularly, and I relied on his wisdom and ability to get things done for our community.”

When there was legislation with local impact, Feinen said, “he was my first phone call.”

“He was always in contact,” Feinen said. “I will miss that, but what I will really miss is his kind nature, his care for our community and his hilarious sense of humor. He made me laugh every time I talked to him. He was just the best.”

Other legislative colleagues from both sides of the aisle are mourning his loss.

“Scott embodied professionalism and bipartisanship in his role of senator, and I will be forever grateful for all the accomplishments we were able to bring to the great people of Champaign and Vermilion counties,” said state Rep. Mike Marron, R-Fithian.

“The Senator and I have worked side by side my entire legislative career,” she said. “Throughout that time, I have always valued his insight, his passion and willingness to do the right thing for our communities and the people of Illinois. I am heartbroken to lose such a dear friend, and I join his friends, colleagues in the General Assembly and the rest of Illinois in grieving his passing.”

“Scotty was a great guy who worked tirelessly for the folks of Champaign and Vermilion counties," Rose said. "I always enjoyed the fact that when it came to local issues, we would work together without partisanship.

“I always looked forward to seeing him around town, whether at the YMCA or Buffalo Wild Wings, where we could occasionally run into each other with our kids," he added. "The world needs more Scott Bennetts, not less. Our prayers go out to his entire family.”

“Senator Scott Bennett was a good man who always operated with the best interest of his constituents in mind,” Pritzker said. “Throughout his time in Springfield, he fiercely advocated for the institutions that shaped his life, from his upbringing on a Gibson City farm all the way to the University of Illinois Urbana-Champaign. The entire state is a better place thanks to his service.”

The union that represents the UI’s building-service workers, SEIU Local 73, sent condolences to Sen. Bennett’s family, calling him an “ally to the labor movement in Illinois.”

“He stood up for working families by supporting the Workers’ Rights Amendment and supported our members in their fight for a fair contract at the University of Illinois Urbana-Champaign,” said union spokesman Eric Bailey.

Sen. Bennett’s family has requested that no flowers be sent. There will be information later on how to make a donation in his name, according to the Illinois Senate Democrats.

A memorial service will be held at 10 a.m. Monday at Krannert Center for the Performing Arts.