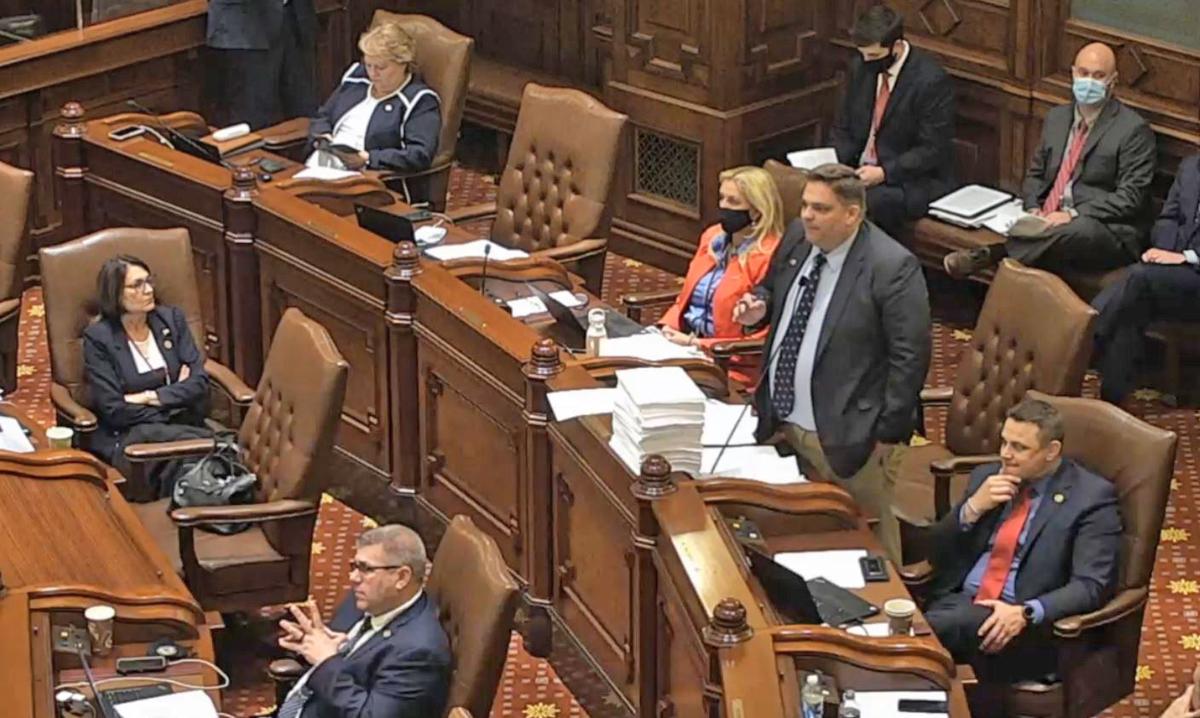 State Sen. Chapin Rose, R-Mahomet, speaks on the Senate floor opposing the state's fiscal year budget, in part because it did not include funds to pay down the Unemployment Insurance Trust Fund deficit. 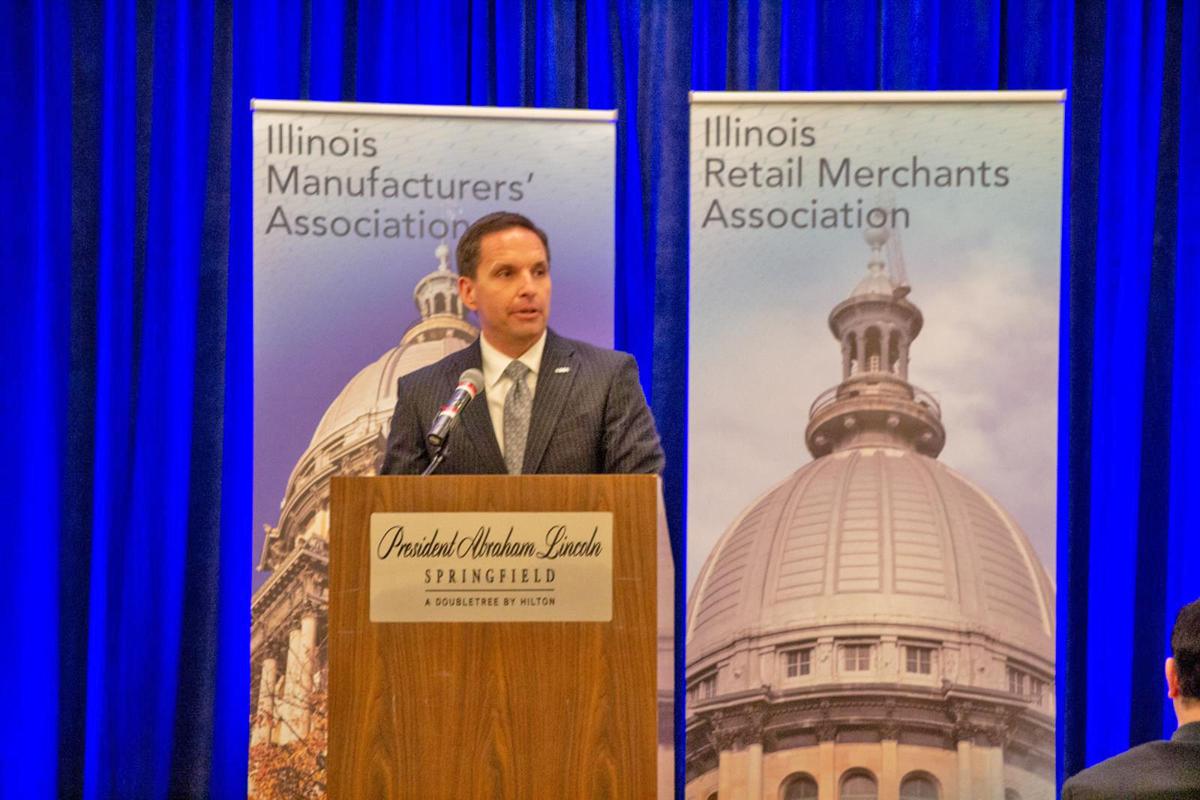 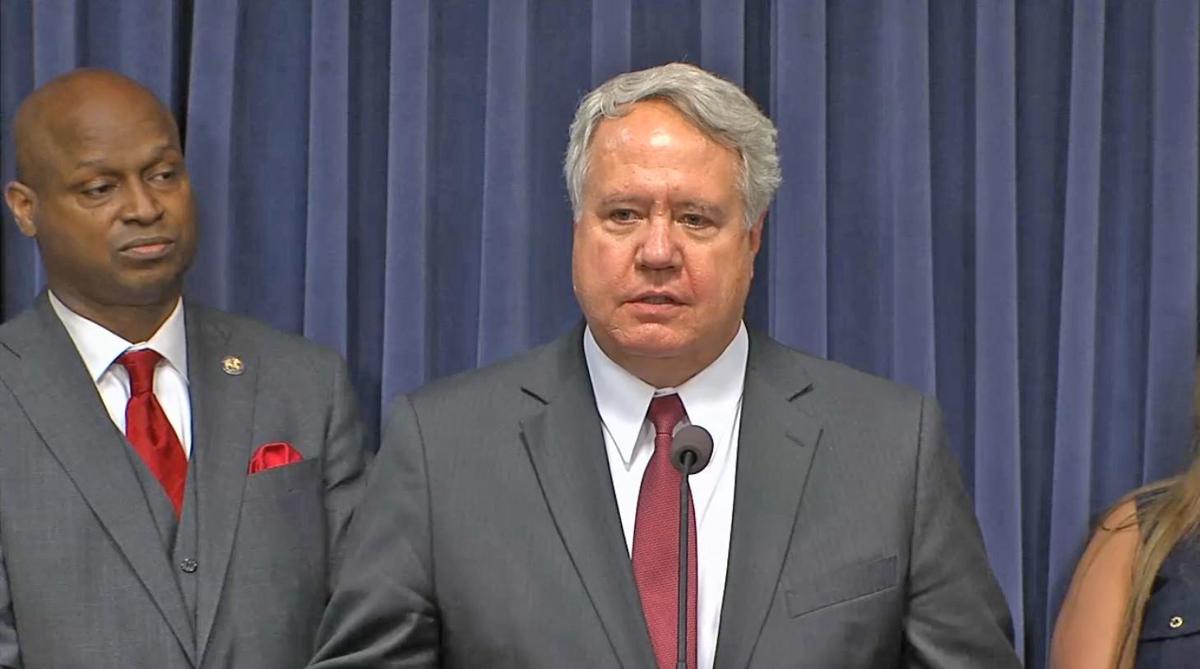 Rep. Jay Hoffman, D-Swansea, speaks at a news conference following the adjournment of the Illinois House in June. He is an assistant majority leader and led House negotiator on unemployment issues.

State Sen. Chapin Rose, R-Mahomet, speaks on the Senate floor opposing the state's fiscal year budget, in part because it did not include funds to pay down the Unemployment Insurance Trust Fund deficit.

Rep. Jay Hoffman, D-Swansea, speaks at a news conference following the adjournment of the Illinois House in June. He is an assistant majority leader and led House negotiator on unemployment issues.

In Illinois, that’s led to a deficit in the Unemployment Insurance Trust Fund — or the pool of money used to sustain the social safety net — that could rise to $5 billion.

Stakeholders from both political parties, as well as business and labor groups, are now warning of “crippling” tax increases on businesses and cuts to unemployment benefits that could result if the deficit goes unaddressed for too long.

But even as the deficit continues to grow amid still-high unemployment rates, state lawmakers have not set a clear path forward for digging out of the historic hole.

“I think a larger discussion has to begin sooner rather than later, but we’re kind of waiting on, you know, getting a total handle on the size of the problem,” said state Rep. Jay Hoffman, D-Swansea, a lead negotiator on unemployment insurance.

Meanwhile, the state faces looming interest payments likely in the tens of millions of dollars on more than $4 billion of federal borrowing undertaken to pay out benefits at the height of the pandemic.

Lawmakers and stakeholders reached by Capitol News Illinois said they were hopeful for another round of federal aid, this time targeted to shore up trust funds. Failing that, they think the state should use a large portion of its remaining federal American Rescue Plan Act funds — more than $5 billion of the $8.1 billion allocated to the state — to address the deficit.

Each state has an Unemployment Insurance Trust Fund account maintained by the U.S. Treasury Department but funded by the state’s businesses through insurance premiums collected via payroll taxes. The rates at which businesses pay into Illinois’ fund are determined by a complex formula based on unemployment rates, the solvency of the fund, employer experience, number of employees and other factors.

Normally, incoming funds outpace the amount of outgoing benefits, but as the state’s unemployment rate grew as high as an unprecedented 16 percent in April 2020 amid forced shutdowns, those trends drastically reversed.

When this happens, states can borrow from the federal government in what is called a Title XII advance to pay benefits. As of July 7, Illinois’ outstanding balance for Title XII borrowing was $4.2 billion, according to the Treasury Department, but that is expected to grow this year as the unemployment rate remains high, most recently coming in at 7.1 percent.

As of July 7, Illinois was one of 17 states with a trust fund deficit, and the collective national deficit exceeded $54 billion.

While federal lawmakers passed a moratorium on Title XII interest payments in previous COVID-19 relief packages, that is set to expire Sept. 6, at which point interest will accrue at a rate of 2.27 percent. According to IDES, the state has allocated $10 million for interest payments in the current fiscal year, the first of which will be due Sept. 30.

When deficits reach such a level, options for reducing them include an increase to the tax rate for employers, a reduction in unemployment benefits, an addition of other state, federal or private funds, or some combination of those efforts.

If any state maintains an outstanding balance of federal borrowing for too long, federal law stipulates that Federal Unemployment Tax Act credits for businesses would decrease incrementally, eventually increasing an employer’s tax burden from about 0.6 to 6 percent. No states are in danger of a reduction in that credit in 2021.

State law, however, builds “speed bumps” into the repayment process that encourage labor and business interests to address deficits in a timely manner. Those “speed bumps” initiate penalties that, beginning in 2022, would include shortening the benefit period from 26 to 24 weeks, lowering wage repayment from 47 to 42.4 percent, and an increase to the employer tax rates, according to IDES.

Rob Karr, CEO and president of the Illinois Retail Merchants Association, estimated that the “speed bumps” would essentially raise taxes by $500 million on employers and cut $500 million in unemployment benefits.

The simplest solution to avoid those penalties, Karr said, is to dedicate a large portion of the state’s remaining $5 billion-plus in American Rescue Plan Act funding to paying down the deficit.

“If you’re a restaurant trying to reopen after COVID and you’ve been closed, and you’re just now getting your feet back under you and suddenly you get hit with this smack-down penalty, well, you know, that’s less employees you can rehire, it’s less new employees that you could hire, or maybe you just don’t reopen at all,” he said. “Or that cost gets passed along to the consumer.”

Gov. J.B. Pritzker’s office did not directly respond to questions as to whether federal funds might be put toward the deficit.

“The COVID-19 global pandemic has left every state in the nation facing unemployment trust fund shortfalls,” a spokesperson said. “As the state works to emerge from this pandemic with continued economic growth, the administration has been in communication with our federal partners to ensure there is a comprehensive solution.”

Durbin also noted that the federal funds should provide Illinois some budget leeway, but when asked if he would advise the governor to save some of the remaining funding to pay down the trust fund deficit, he did not directly answer.

“I was with him (Pritzker) yesterday, and I asked him if they had any definite plans for the $8 billion. Not yet,” Durbin said. “They’re working with the legislature on that. So in terms of the Unemployment Trust Fund, it didn’t come up in the conversation.”

Rose and other Republicans have argued for ending an extra $300 monthly payment to those on unemployment earlier than the federal expiration set for September. They say the money — even though it is fully funded by the federal government — disincentives people from rejoining the workforce by making unemployment benefits more lucrative than taking a lower-wage job, thus adding to the state’s burden by keeping people on unemployment.

Democrats, however, have outright rejected any suggestion of ending the added federal benefits early.

“We’re trying to measure doing enough to help families and still creating an incentive to get back to work,” Durbin said.