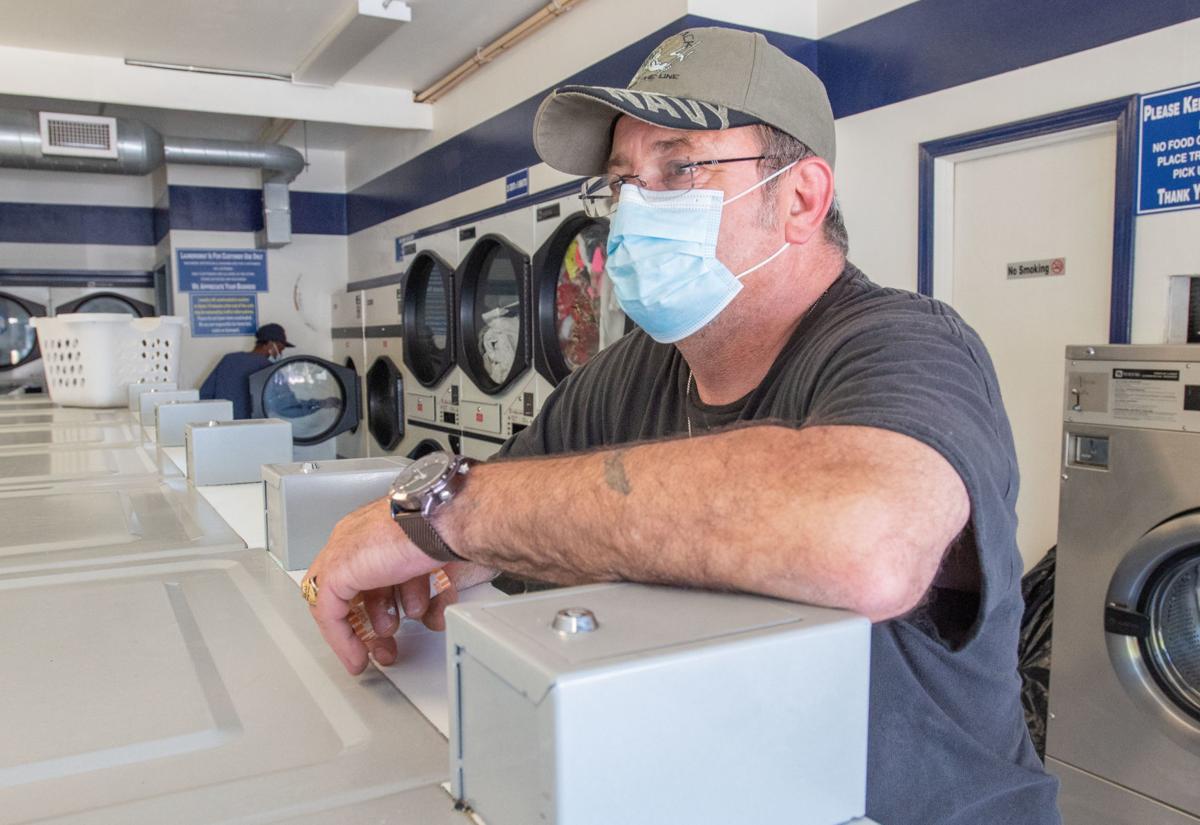 Phoenix Drop-In Center assistant Russell Mann waits for clients at the Maytag Coin Laundry on Neil and Columbia in Champaign, where the facility has established hours for clients to do laundry. 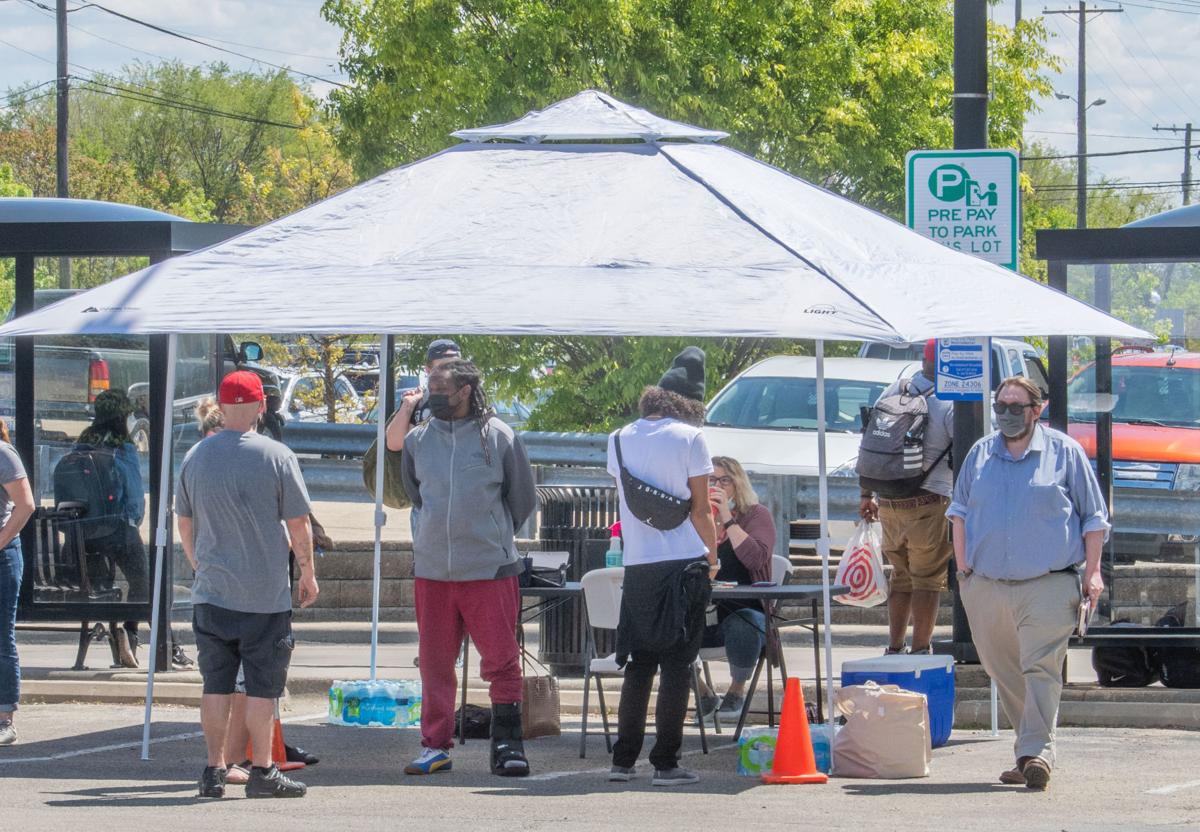 Local social service agencies were meeting individually with homeless people outside the Illinois Terminal building in Champaign this past week to help find other places to go for those being displaced by C-U at Home’s pause in shelter services.

Phoenix Drop-In Center assistant Russell Mann waits for clients at the Maytag Coin Laundry on Neil and Columbia in Champaign, where the facility has established hours for clients to do laundry.

Local social service agencies were meeting individually with homeless people outside the Illinois Terminal building in Champaign this past week to help find other places to go for those being displaced by C-U at Home’s pause in shelter services.

CHAMPAIGN — It was last June when C-U at Home leaders announced they were taking a leap of faith and extending year-round shelter for homeless men and women several months earlier than they planned.

“We made a plan, and God had a better one,” Executive Director Rob Dalhaus III said at the time, months into a raging pandemic that came with some unique challenges for people without their own four walls.

C-U at Home had planned to close its emergency winter shelter at 70 E. Washington St., C, for the season in April 2020 and then get ready to provide year-round shelter starting in November.

But because of the pandemic, the shelter never actually closed.

That is, until this past week — when C-U at Home made a surprising announcement that it was temporarily suspending several of its services to remedy significant staff shortages leading to serious safety concerns.

The pause in services includes a daytime drop-in center and the new year-round overnight shelters for homeless men and women, though the shelters are continuing to house 15 people invited to stay because of two programs they’re in, agency Managing Director Aleta Keith said.

Dalhaus said the agency isn’t stepping back due to money issues, after its annual fundraiser in February, One Winter Night, raised $563,000.

“This is not a financial or a support issue, because we have been incredibly blessed,” he said.

He also wants the community to understand this is a short-term pause for a long-term win.

“We will come back stronger,” he promised.

What safety issues C-U at Home has been grappling with haven’t been made entirely clear by its leaders, but drug use, thefts and fights among shelter guests may have been among them.

Claudia Lennhoff, executive director of Champaign County Health Care Consumers, said her organization serves many clients who have stayed at the shelters, and she’s been told by many of them about fights at night that have kept them from being able to sleep; thefts of their personal items, such as medications, wallets, eyeglasses and IDs; and some illegal drug use by fellow shelter guests — posing challenges for those trying to maintain sobriety.

Lennhoff said she asked C-U at Home why shelter guests weren’t able to use lockers and was told some people were bringing in contraband.

“So we have had to work over and over again with homeless clients to replace their medications, help them get new eyeglasses and help them get their IDs, which can be very challenging if you don’t have the documentation to get the ID once it’s gone,” she said.

Lennhoff said she was also told by some clients that they walked in on illegal drug use in the men’s room at the shelter.

She recalled one Health Care Consumers client who overdosed on heroin he told her he’d obtained at the shelter, then ended up in the hospital and being transferred to a mental facility, Lennhoff said.

“He ended up using heroin and OD-ing on it, and now he can’t get some of the medications he was using for anxiety,” she said.

Lennhoff said the temporary suspension of services is concerning because the community needs an overnight shelter and daytime drop-in center for the homeless, and people have come to rely on those services being available, “and there is not an easy replacement for that.”

“I am profoundly concerned about this situation, and I certainly hope that C-U at Home can use this time during the pause to get themselves reorganized and stabilized and capable of providing the services for which they have been generously funded by the community to provide,” she said.

As a “damp” shelter, C-U at Home doesn’t drug-test or breathalyze a guest who turns up intoxicated, though it also doesn’t permit drug or alcohol use on the premises, Dalhaus said.

And, he said, “I would say it’s naive to say that stuff doesn’t happen. I wouldn’t say it was by the majority of folks.”

Dalhaus expressed concerns about a focus on drug or alcohol use among shelter guests because of the potential for negative stereotypes of the homeless.

“The best way to portray it — we don’t want stuff to come off as super negative to stereotype the folks we serve,” he said. “Take a group of individuals, many of which suffer with substance abuse, mental health issues, you add in a pandemic where there’s not a lot going on and folks can lean toward self-medication. I’m not saying a lot of them, but some of them, and it can create an opportunity for escalated situations. For us, it’s a matter of having adequate staff and monitoring those situations.”

While the pandemic has caused worker shortages across a number of sectors, hiring people willing and able to work overnight with the homeless population has some unique challenges, agency leaders said.

C-U at Home’s staffing issues worsened about a month ago with the departure of two employees, with day staff then helping fill in on night shifts, he said.

In an effort to find more shelter employees, the agency has increased the hourly wage from $13 to $15 and broadened its job searches, Dalhaus said.

One recent job listing for C-U at Home on the Indeed job search site said staff members for the men’s shelter should, among other things, “possess a genuine compassion for and desire to serve the homeless and those in need,” “be committed to C-U at Home’s core values,” “maintain a peaceful, safe and comfortable environment,” “handle difficult and unruly guests by utilizing de-escalation techniques” and “ensure that occupants are not using drugs, alcohol or weapons on the premises.”

C-U at Home Board Chairwoman Maggie Johnson said the board has discussed relevant safety issues, and one of the main goals during the service pause is to look at what’s needed to support the staff with training.

“I think the message we want to send is that we very much care about our friends on the street, and this was not a decision easily made, but one we need to make to make sure our services were sustainable,” she said.

C-U at Home and other agencies in the community that provide services to the homeless have been working for more than a week to find alternate places for them to stay, according to Thomas Bates, coordinator of the Champaign County Continuum of Service Providers to the Homeless.

Other homeless shelters outside the community have been contacted. Locally displaced homeless people have been asked on a case-by-case basis about other options they may have, such as friends and relatives who might have a temporary space for them. And they’ve been tested for COVID-19, since some shelters require a negative test for admission.

Cunningham Township Supervisor Danielle Chynoweth said the township is using some donor funds to house five people who were staying at the shelters in local hotels on a temporary basis.

Three others who have had dealings with the township are among those staying at the shelters because they’re participants in a voucher program through the Housing Authority of Champaign County and on track for more permanent housing, she said.

Chynoweth also said she thinks it’s important to remember C-U at Home and Austin’s Place — the shelter for homeless women that became part of C-U at Home last June — stepped up to house the homeless in the community.

Years ago, she said, “we had no shelter at this time of year. Now we as a community know we have to have a shelter, and I’m heartened by that.”

Beverley Baker, community impact director for the United Way of Champaign County, said the United Way has developed a close relationship with C-U at Home as the two agencies have worked together to provide year-round shelter for the homeless.

She’s comfortable with the decision the C-U at Home board made to pause services, she said.

“Ultimately we want them to be strong for the future,” Baker said. “They’ve grown very quickly. They’ve responded to the need of the community, and anybody who runs a business knows there are growing pains.”

Social service agencies have a hard time hiring in general, Baker said. The wages are generally low and the work is emotionally draining.

Add to that working in a shelter with overnight hours, working with people with substance abuse and mental health issues, “then you add in a pandemic,” she said.

In suspending some services earlier this week, C-U at Home also said it hopes to resume them June 14 with new policies and procedures in place, and Baker said she’s confident these steps will help the agency emerge stronger for the future.

She’d also ask the community to recognize that the work C-U at Home took on providing shelter for men and women year-round is “a big lift.”

“They need our understanding,” she said.

Dalhaus said C-U at Home needs something else from the community at this time.

“If praying is your thing, I’d encourage everybody to pray,” he said. “Not just for the folks we’re working with for the transition, but for our staff and our community.”