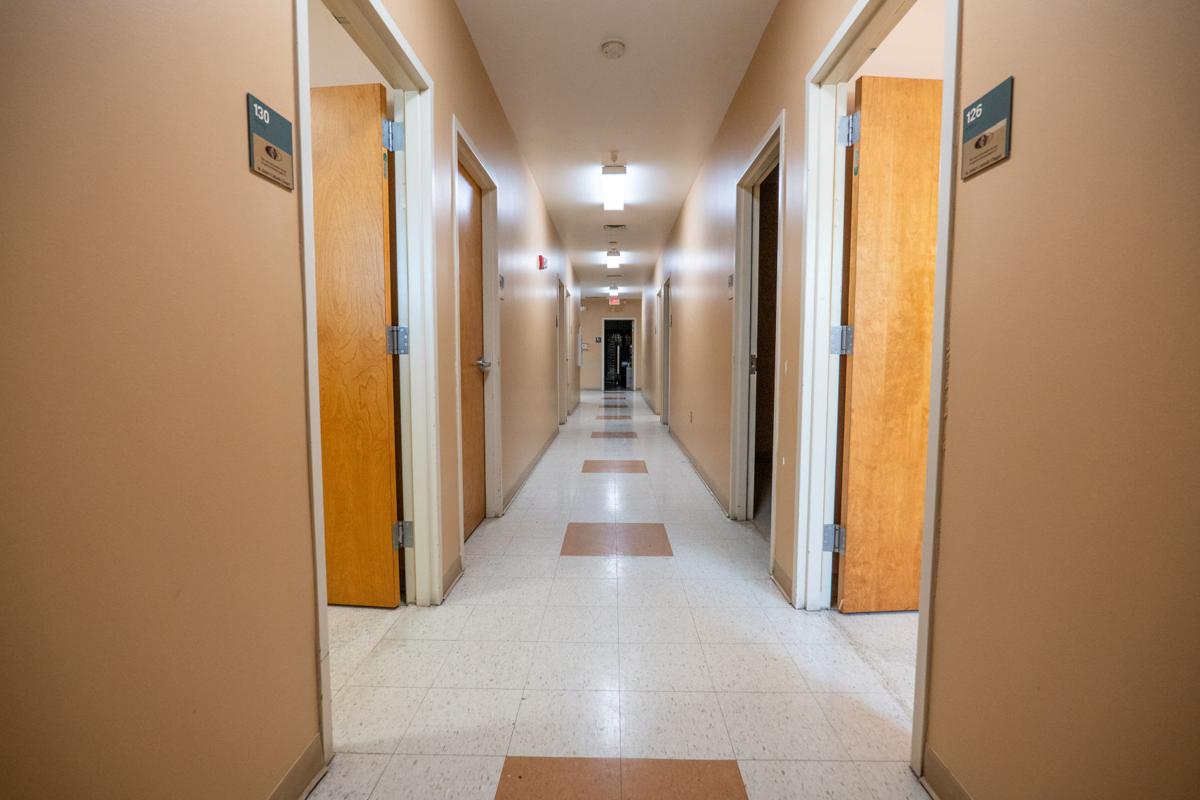 The new year-round women’s shelter in the back of C-U at Home’s Phoenix Drop-in Center in Champaign will have seven rooms that can house 14 women. 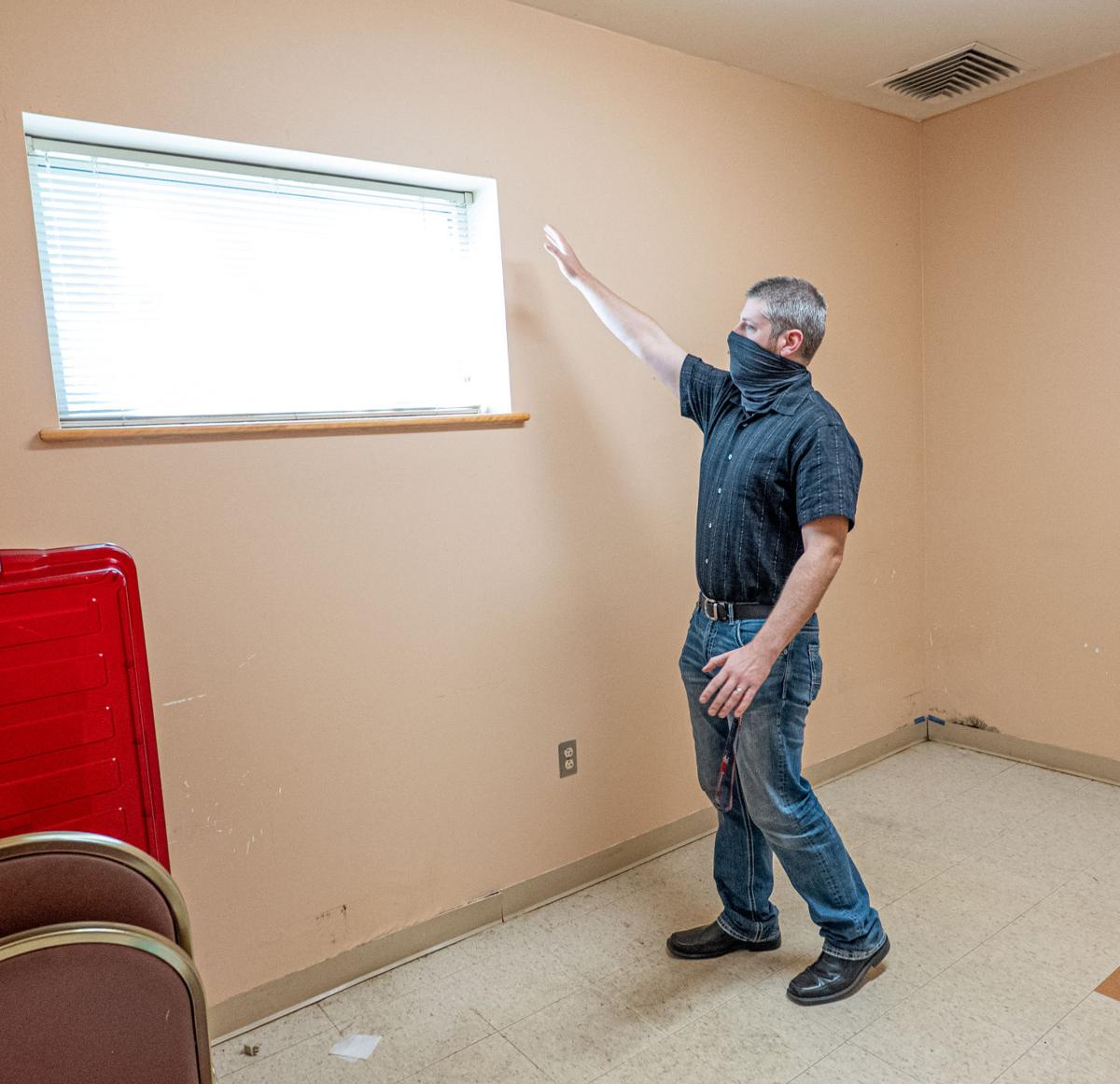 C-U at Home director Rob Dalhaus III points to a window that will be expanded to view the street, in what will be the office of the year-round women’s shelter in the back of the Phoenix Drop-in Center in Champaign, which currently houses a year-round men’s shelter.

The new year-round women’s shelter in the back of C-U at Home’s Phoenix Drop-in Center in Champaign will have seven rooms that can house 14 women.

C-U at Home director Rob Dalhaus III points to a window that will be expanded to view the street, in what will be the office of the year-round women’s shelter in the back of the Phoenix Drop-in Center in Champaign, which currently houses a year-round men’s shelter.

CHAMPAIGN — Eight small rooms, a break room and a large bathroom sit empty in the back of C-U at Home’s Phoenix Drop-in Center on the northern edge of downtown Champaign.

Soon, the dingy tiles will be replaced with gleaming new floors, the rooms will be furnished with two bed frames and mattresses apiece, and the room looking out to Market Street will be made into an intake office for Austin’s Place, the year-round women’s shelter that will occupy the building.

When the renovations are finished in the next few months, it will be the actualization of years of talk, planning and fundraising for Kelli Kemper and Kim Stanhope and their staff at Austin’s Place women’s shelter, which will be making the move into the building.

“We’re just really excited to get the women into a new space and have everything be fresh and nice and new,” Kemper said.

The co-leaders of the shelter, both of whom volunteer after working their full-time jobs during the day, are handing off the reins to full-time staff at C-U at Home.

When that brand-new office is occupied, complete with a large window that looks out onto the sidewalk, and those beds, donated by Illini Mattress, are filled, Kemper and Stanhope will be taking a step back from a shelter they’ve molded over the last six years.

“It’s bittersweet because we’ve put a lot of heart and soul, blood, sweat and tears into it over the years,” Kemper said. “We’re super excited for it to move onto this next level because it’s obviously needed in the community, and it’s not something that we can do, but we’re really excited that C-U at Home and the men’s shelter are willing and able.”

Until earlier this year, Austin’s Place was based at First United Methodist Church. Due to safety precautions surrounding the COVID-19 pandemic, the shelter moved into hotel rooms for a few months before moving into New Covenant Fellowship during the summer.

Over the summer, C-U at Home began to take over operations of Austin’s Place, including having paid staff supervise the shelter overnight instead of the volunteers who have historically staffed Austin’s Place. Whereas women used to have to check in with Courage Connection, which provides services to victims of domestic violence, before staying at the shelter, they can now come directly to the shelter at any time of night.

At its new space, 14 women will be able to occupy seven small, separate rooms, which will not have doors. They’ll come in through a separate entrance off of Market Street, which is being redone, into a space that will be completely locked off from the men’s shelter.

“The nice thing about it is that it gives the women some sense of privacy even though we’re taking the doors off,” Kemper said. “It also allows us, too, if we have women … with substance abuse issues, they will still be able to come in, but the women that are working on their sobriety will be able to stay separate from those women. It doesn’t provide that temptation for the woman that’s trying to stay clean.”

In August, the shelter has hosted 50 to 60 men almost every night, Dalhaus said, while Austin’s Place has hosted around a dozen since moving to New Covenant.

“It’s interesting that the emergency shelter numbers were so high in August, because we haven’t had an emergency shelter open in August in this community in almost 20 years,” Dalhaus said. “That’s eye-opening, and it gives us a little bit of a glimpse of what down the road will look like. Who knows what this winter will look like. It just shows us the need of having that resource in the community. The numbers are staggering.”

C-U at Home recently launched a campaign to enlist 600 monthly donations of $40. That amount of money would fully fund the operating costs of both the men’s and women’s year-round shelters, Dalhaus said. As of Tuesday, 76 monthly donors had signed up. Donors can enlist at cuathome.us.

Renovations will officially begin when the contractor receives final approval from the city and should be ready sometime in the next few months.

While Kemper said it’ll be a bittersweet moment to hand over the reins of Austin’s Place to C-U at Home, she knows the new shelter will provide services the old shelter couldn’t. C-U at Home offers social services, transportation, transitional housing and a daily drop-in center, and also helps the homeless connect with other services in the area.

As board members, she and Stanhope will still have their fingerprints on the organization as it begins a new chapter.

“We’re not necessarily turning our backs and walking away, but we definitely need to hand it over and let the professionals take over,” Kemper said. “I don’t think that we’ll ever be able to completely walk away from it. I think it’ll be something that will keep us involved for a long time to come.”