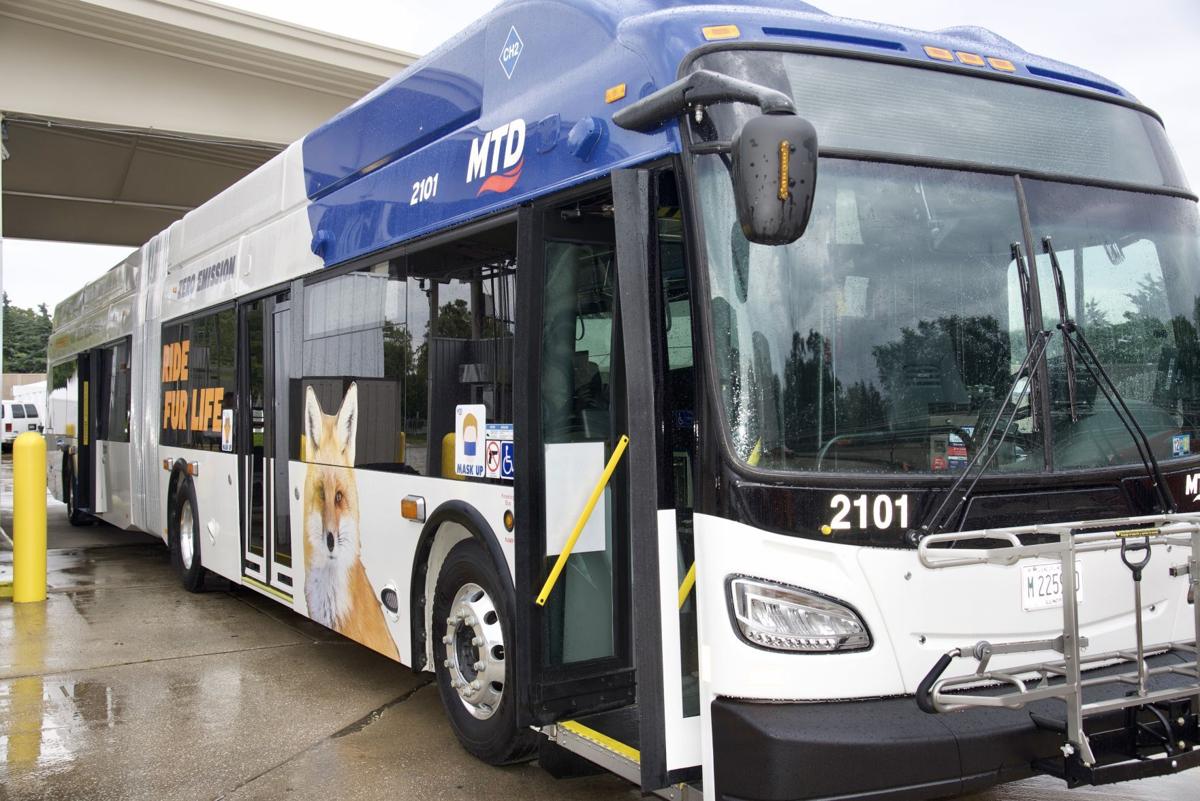 One of the Champaign-Urbana Mass Transit District’s two new zero-emissions buses powered by hydrogen fuel cells is shown at the fuel pump at the MTD’s operations facility in east Urbana. 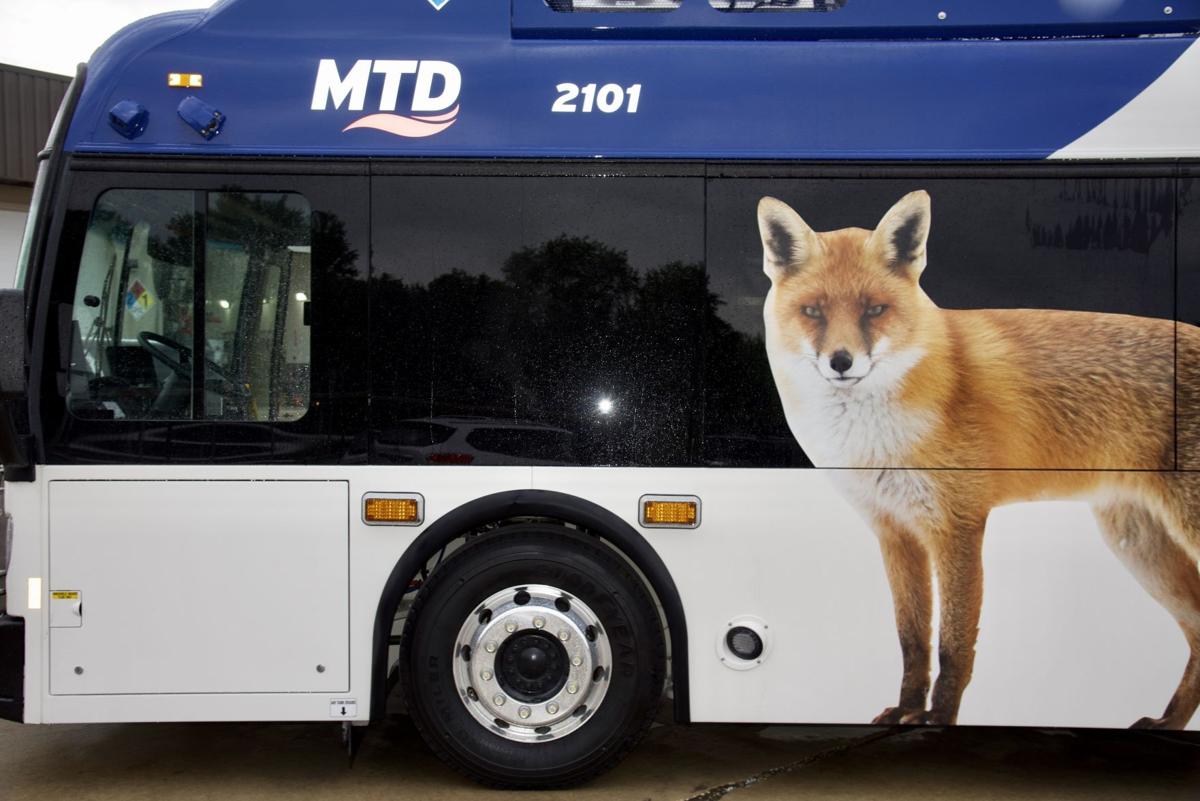 The driver’s side of one of the C-U Mass Transit District’s two new zero-emissions, hydrogen fuel cell electric buses. 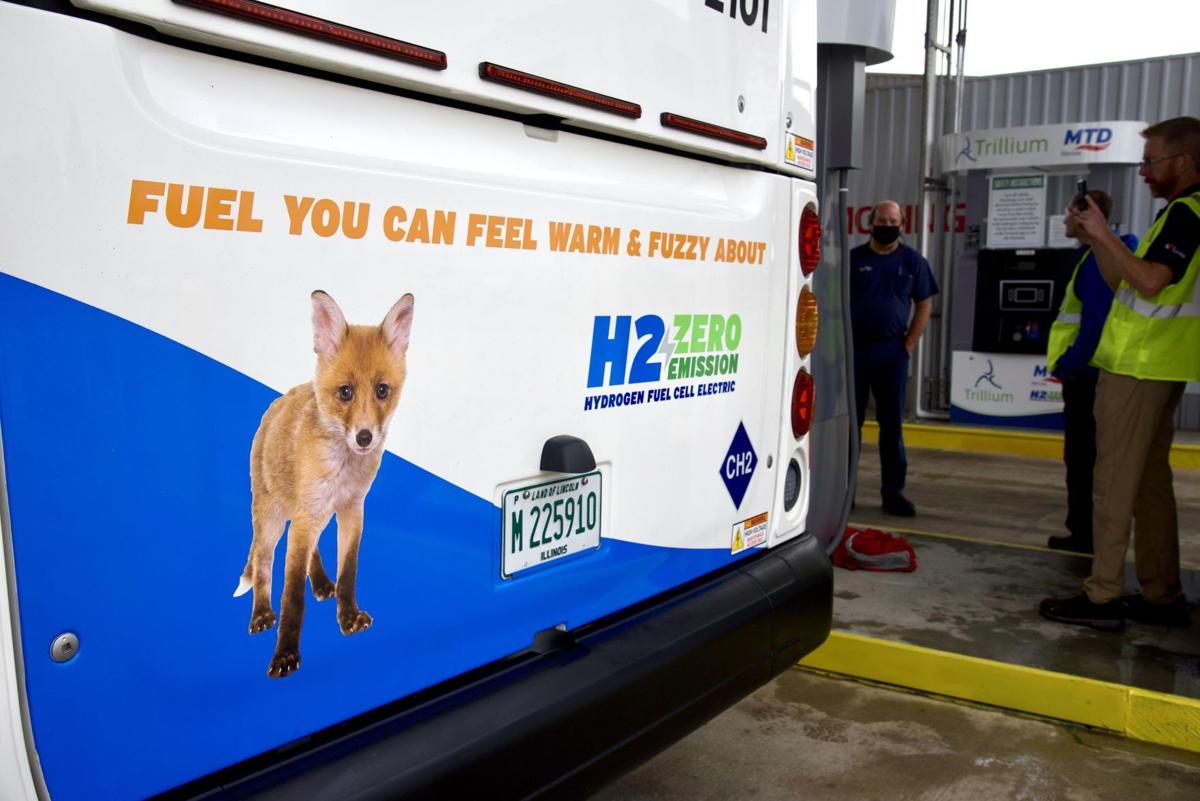 The back of the C-U Mass Transit District's new zero-emissions, hydrogen fuel cell electric bus, at one of its fuel pumps. 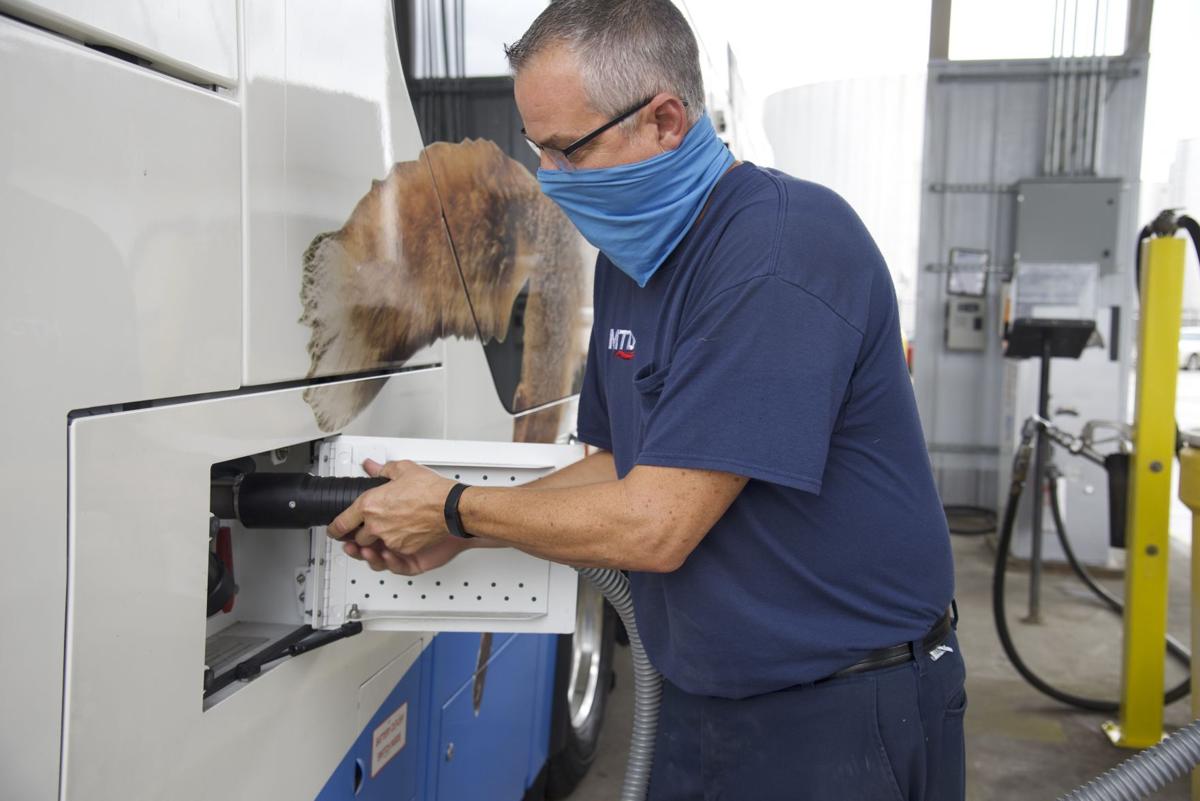 MTD employee Tim Ray demonstrates how to fuel up the agency’s new zero-emissions buses with hydrogen.

One of the Champaign-Urbana Mass Transit District’s two new zero-emissions buses powered by hydrogen fuel cells is shown at the fuel pump at the MTD’s operations facility in east Urbana.

The driver’s side of one of the C-U Mass Transit District’s two new zero-emissions, hydrogen fuel cell electric buses.

The back of the C-U Mass Transit District's new zero-emissions, hydrogen fuel cell electric bus, at one of its fuel pumps.

MTD employee Tim Ray demonstrates how to fuel up the agency’s new zero-emissions buses with hydrogen.

CHAMPAIGN — The Champaign-Urbana Mass Transit District’s newest buses are clean. So clean, in fact, that the water vapor — yes, water vapor — coming out of their tailpipes is good enough to drink.

“I was going to hold a cup underneath where the water comes out and take a drink as a demonstration,” MTD Managing Director Karl Gnadt said Wednesday. “The thing is, it comes out in such a fine mist, it’s just not practical to do that.”

The MTD has added two buses to its fleet that run entirely on electricity generated by hydrogen fuel cells.

It’s the first transit system in Illinois, and one of six in the entire United States, to have hydrogen-fuel-cell buses hitting the roads. And these two, at 60 feet long, are the biggest among them.

But that’s not all: The MTD is also putting the finishing touches on its own hydrogen production station across the street from its headquarters, set to be completed in 2022.

U.S. Sen. Dick Durbin, D-Ill., U.S. Rep. Rodney Davis, R-Taylorville, and others are scheduled to join MTD officials this morning at the district’s maintenance facility in Urbana, where they’ll tout the new technology at an event called “Riding on Sunshine.”

Armed with 5,500 solar panels, the station will generate electricity to separate hydrogen from water and fuel the buses via 100 percent renewable energy.

Basically, once the facility is completed, the buses will run with zero emissions. No fossil fuels required.

“Zero-emission buses are an up-and-coming thing in the transit industry, around the world but significantly in the United States,” Gnadt said.

About 10 years ago, many industry leaders moved toward battery-powered buses — “the bus version of a Tesla,” Gnadt said. About 97 percent of the MTD’s fleet of buses are hybrid diesel/electric model, like a Prius.

While they reduce emissions significantly, battery-powered buses have struggled with short ranges — usually less than a third of their diesel counterparts — and six-hour charge times, Gnadt said.

“We want to go zero emissions, but we want to do it in a way that allows us to continue to make our routes and schedules serve the community’s needs instead of our vehicle’s needs,” Gnadt said. “Hydrogen electric does that.”

The MTD consulted with the few others agencies that have adopted the hydrogen-electric buses. There’s one in Flint, Mich., and some model in Canton, Ohio. AC Transit of Oakland, Calif., has run hydrogen-fuel-cell buses since 2000.

“They love them, and they’re trying to buy more,” Gnadt said.

Gnadt has taken a few rides in the hydrogen buses, and he said the experience is basically indistinguishable from the typical drive. There are even a few perks.

The first two of the MTD’s hydrogen models are projected to save a combined 100,000 gallons of diesel fuel each year, compared to the pure diesel models they’re replacing. (The district only has four diesel buses left of its fleet of 114).

And these new buses are just a pilot program. The hydrogen production station should create enough fuel to power 12 vehicles, said Jane Sullivan, the MTD’s grants and governmental affairs director.

“We’ll start building up that fleet over the next couple years,” Gnadt said.

Gnadt knows the technology sounds too good to be true. He lights up when he describes the inner workings of his department’s newest models.

“This isn’t quite ‘Star Trek’-like technology, but it is the technology that science fiction wrote about 30, 40 years ago,” Gnadt said.

Through a process called “electrolysis,” the solar panels from the production station will generate electricity to split on-site water into hydrogen and oxygen. The oxygen is released and the gaseous hydrogen is compressed and put into a storage tank.

The hydrogen fuel dispensers in the lot pump the hydrogen from the tanks at the facility into one on top of the bus. The fuel cell then brings out the hydrogen and recombines it with oxygen in the air, producing the energy to power the battery the bus uses.

(Until the facility is finished, the hydrogen-production station will run off the electric grid).

‘It was not cheap’

The two hydrogen-based buses and the facility set to power them were funded off the back of $20.8 million in state, federal and local funds.

About 63 percent of that comes from state sources: $4.54 million from Rebuild Illinois program to help build the solar panels, plus $8.52 million from the Downstate Assistance Program to fund the hydrogen station, bus construction and facility modifications.

Another $5.67 million from the Federal Transit Authority’s Low or No Emissions Program and Section 5307 Urbanized Area Formula Program also helped with the hydrogen station, bus construction and facility changes, while the remaining $2.06 million in local funds went to the solar array and additional consulting and engineering costs.

“It was not cheap to do this, but the long-term benefit is much, much higher than battery electric buses,” Gnadt said.

One bus is estimated to reduce greenhouse-gas emissions by up to 135 tons annually.

And when temperatures are low outside, it will even use waste heat from the fuel cell to keep the inside of the vehicle warm, according to the MTD.

The buses arrived on the property in June; before unveiling them this month, the MTS had to train operators how to drive them and build out the new hydrogen fueling stations.

The maintenance department at early-adopter AC Transit has provided handy advice for the facilities crew in C-U. Beyond the high-voltage work on diesel electric models that the MTD has had since 2009, this is entirely new ground.

By next year, the MTD is set to have a fully low-and-no-emission fleet once the remaining diesel buses are phased out.

It’s the next step in the agency’s long-term sustainability goals.

“Public transit has always had a benefit to getting additional cars off the street, and so that type of mode shift is one of the greatest ways you can benefit the environment,” Gnadt said. “The fewer fossil-fuel-burning vehicles on the street, the better off a community is and the world is.

“This is like the ultimate expression of that goal, that desire to be as environmentally forward-thinking as we can be.”