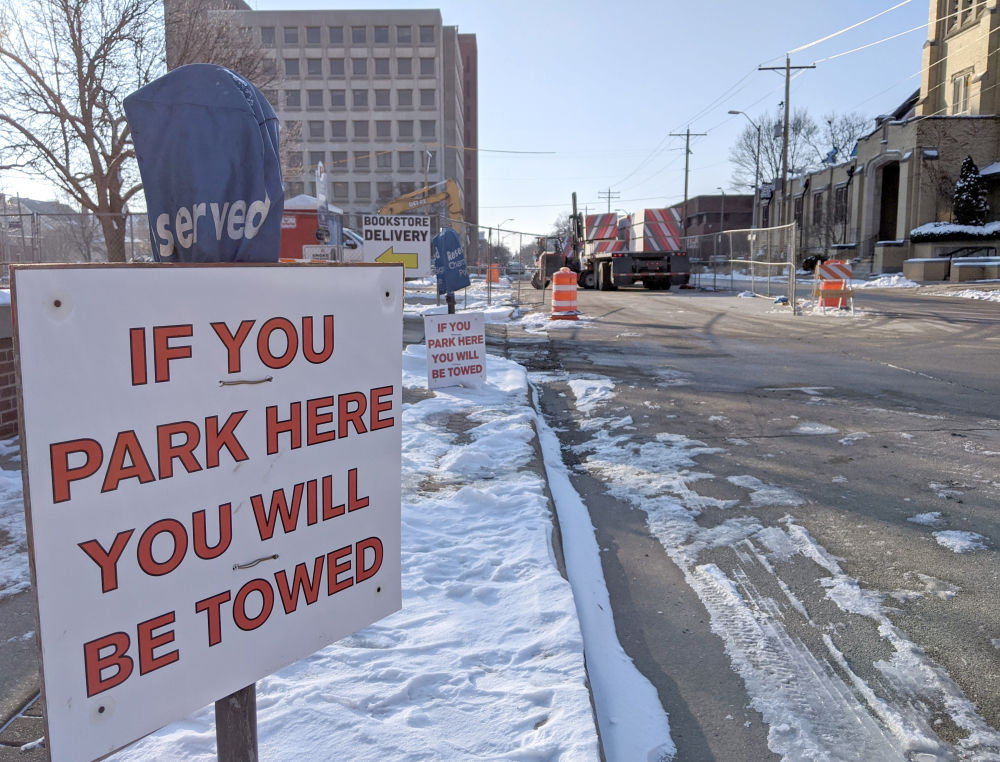 Dozens of metered parking spaces in the central area of the University of Illinois campus have been taken over by construction of the new 13-story Hub on Campus going up at Sixth and Daniel streets. 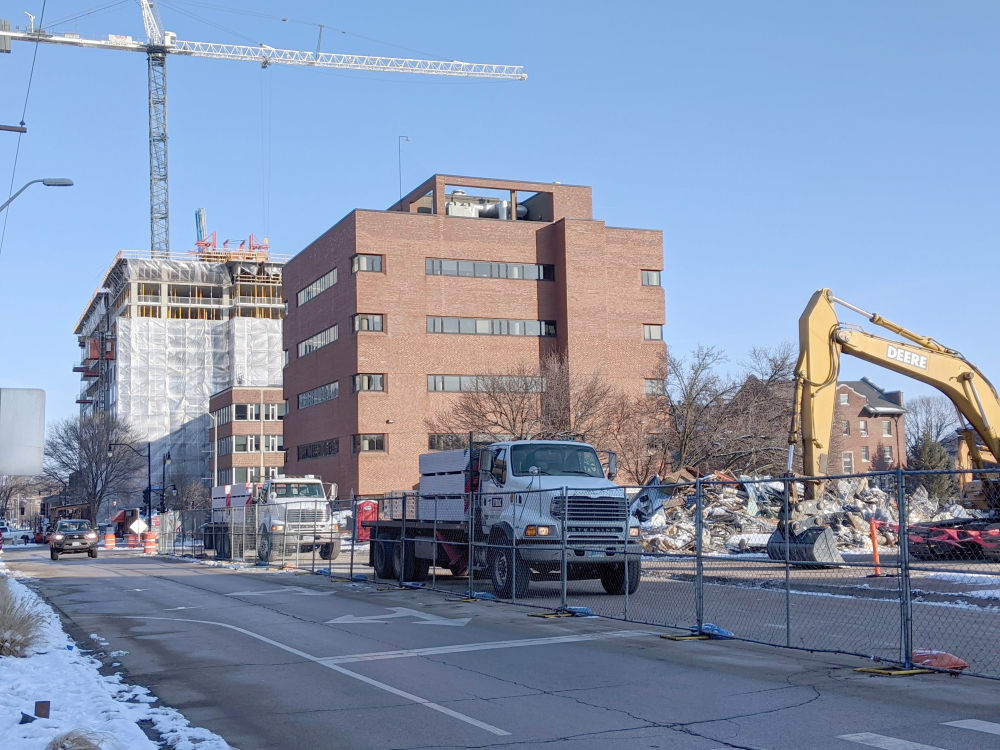 A view from the southwest corner of Sixth and Daniel streets on Wednesday, Dec. 18, 2019, shows the construction site for the new Hub on Campus tower, foreground, the Swanlund Administration Building, center, and The Dean tower going up at Sixth and Green streets, background.

Dozens of metered parking spaces in the central area of the University of Illinois campus have been taken over by construction of the new 13-story Hub on Campus going up at Sixth and Daniel streets.

A view from the southwest corner of Sixth and Daniel streets on Wednesday, Dec. 18, 2019, shows the construction site for the new Hub on Campus tower, foreground, the Swanlund Administration Building, center, and The Dean tower going up at Sixth and Green streets, background.

CHAMPAIGN — Finding a place to park in central campus is never a sure thing, but a spate of construction has made it an even bigger challenge lately.

To put it bluntly, “there is none,” said Stacey DeLorenzo, transportation coordinator for the University of Illinois Facilities and Services. “Welcome to the world for the next two years.”

Construction of a new high-rise at Sixth and Daniel streets has closed one UI lot entirely and eaten up several metered spaces along Sixth Street.

Meanwhile, parking is prohibited at a few dozen city meters along Sixth and John streets to make way for truck traffic and create new loading zones for businesses, she said.

DeLorenzo is the university’s liaison to the new Hub on Campus project going up at Sixth and Daniel streets.

It’s a private development, but the university plans to rent three floors to house several UI offices or departments.

The new 13-story building will extend close to the Swanlund Administration Building at Sixth and John, eating up about 18 parking spaces in a small lot south of Swanlund, she said.

The campus had to build a new temporary loading dock behind the Illini Union Bookstore, as delivery trucks formerly used that lot to get in and out, she said. And because the semi-trailer trucks need a wide berth, the campus decided to temporarily close 60 parking spaces in an adjoining lot around Swanlund, aside from a few reserved for handicapped parking, she said.

Parking is also prohibited at city meters along John Street between Wright and Sixth, to give the semis room as they enter and exit the parking lot, she said.

In all, she estimated about 45 meters along John and Sixth are out of commission.

UI employees who used to park behind Swanlund have been relocated to the parking garage across Sixth Street. She said only about 10 people were displaced — including the chancellor, provost and vice chancellors. The rest of the spaces in that lot were public meters.

Visitors who formerly used street meters in the area are now filling up public meters inside that parking garage, she said.

“We do have complaints that there’s no parking. We have people who try to come and park in the lot that was closed, where the temporary loading dock is,” she said. “They’re not happy with it, but it’s unfortunately what we’re dealing with right now.”

It’s likely to be that way until summer or fall 2021, when the new Hub tower is set to open, she said. And immediately after that, the campus plans to close down two parking garages in the area for renovations, she said.

The tower going up at Sixth and Green streets, The Dean, is scheduled to open in fall 2020.

The parking issues are mostly south of the Green Street business district, and merchants there haven’t reported too many problems, said Veronica Severini, marketing director for the Champaign Center Partnership.

“Parking is definitely a challenge,” but it’s available, said Donna Walthall, owner of Apricot Lane clothing store. “You have to search for it.”’

Walthall worries that the parking challenges will deter residents from coming to campus, but she said there are usually spaces in the garage behind the Marriott hotel at Sixth and Green and metered parking north of Green Street.

“I encourage townspeople to come down, especially when the students are gone. Parking definitely eases up a little bit,” Walthall said.

Some of the bagged street meters that are off-limits to the public are being used by construction workers, but other spaces are temporary loading zones to replace several eliminated by ongoing construction on Sixth and Daniel, she said.

The Hub will rise 13 stories, with the first two floors dedicated to retail and parking, both for residents and the public, she said. The UI will rent the third, fourth and fifth floors, and the remaining levels will be apartments. The building is also supposed to include an underground loading dock for the bookstore, she said.

Demolition, asbestos removal and other prep work has been under way for several weeks, but construction won’t start until after the new year, she said.

Meanwhile, the MCORE work on Wright Street is nearly wrapped up, though the southbound lane is still blocked off. DeLorenzo is awaiting the results of the strength tests on the concrete on that side of the street.

She hopes temperatures will rise above freezing before the end of December so crews can paint lane markings on the pavement.

“We hope to have Wright Street fully open by the new year, but it is weather-dependent,” she said.