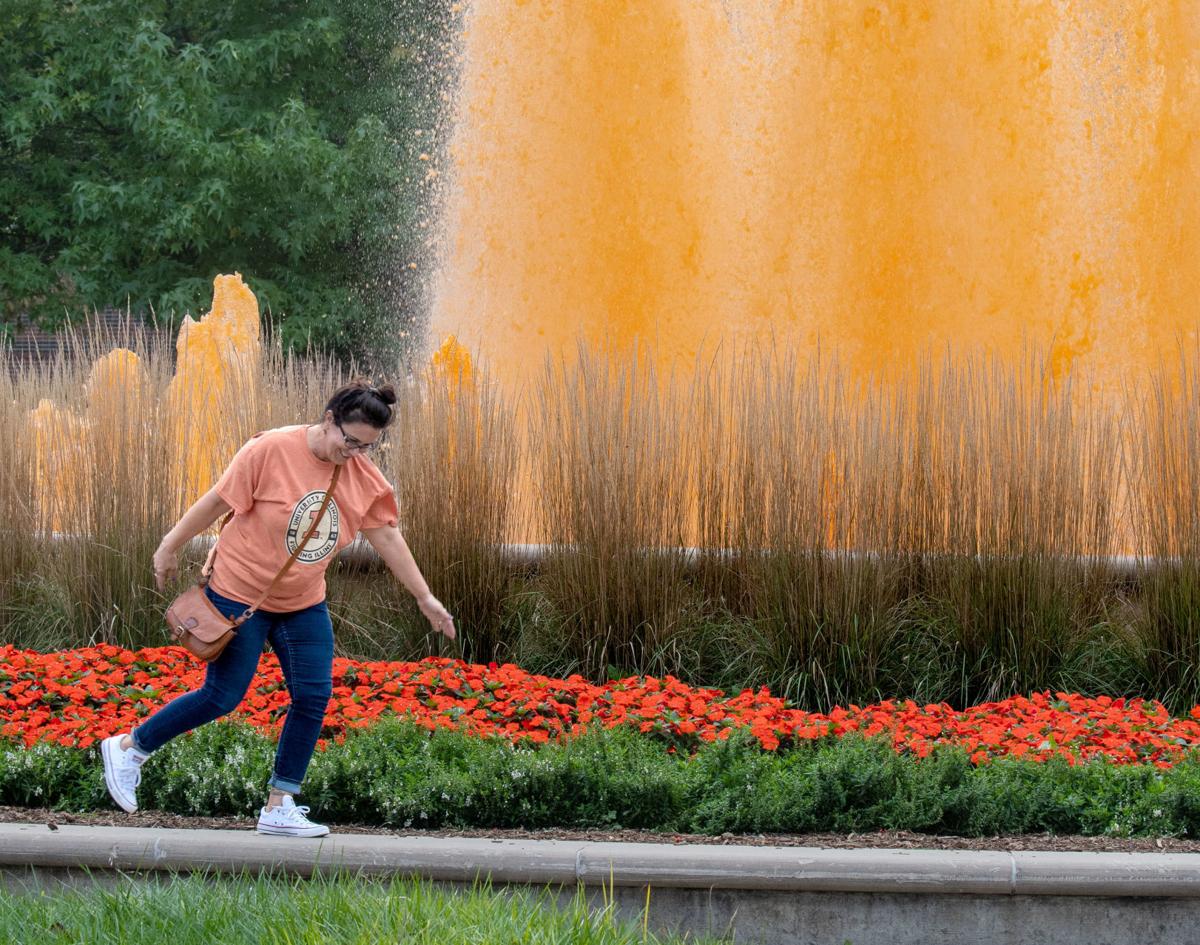 Champaign Central High School teacher Kristina Castillo, a 1997 University of Illinois graduate, goofs around Friday in front of a fountain dyed orange for homecoming week near the Alice Campbell Alumni Center in Urbana. 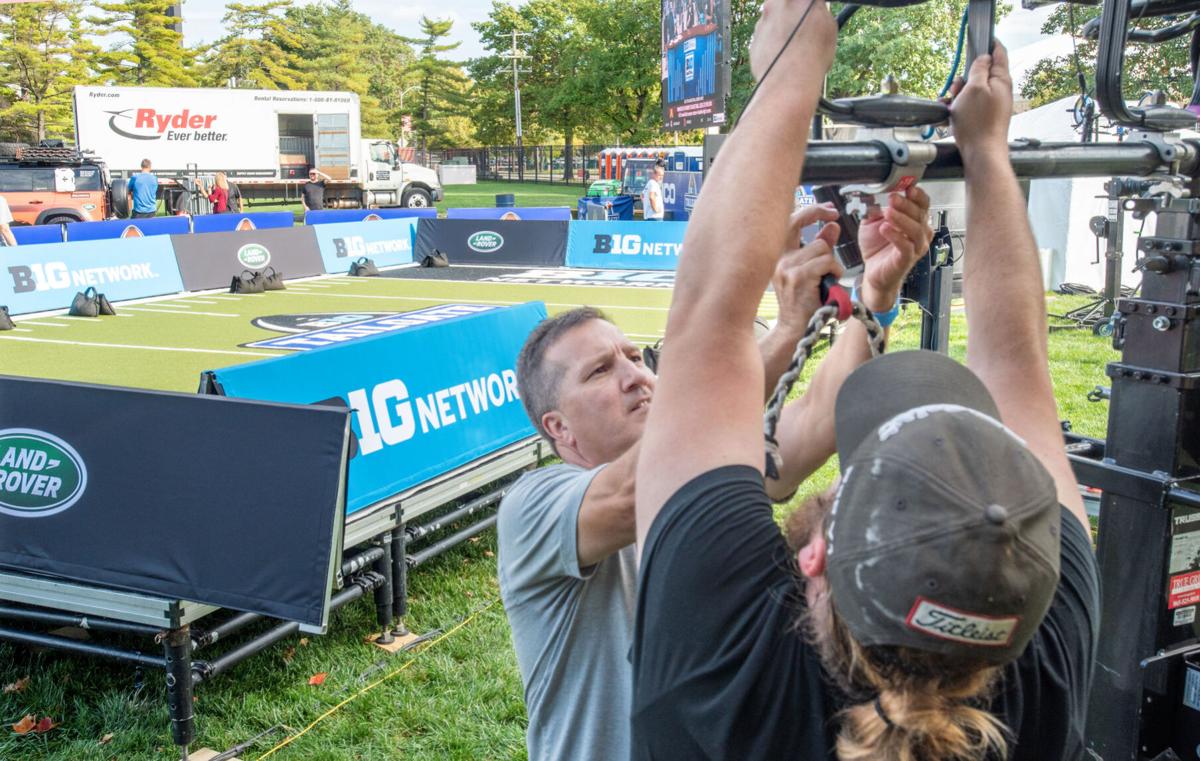 Big Ten Network lighting technician Jim Cortez, left, and lighting director Austin Corcoran set up lights Friday on the set for the network’s broadcast/tailgate area at the southwest corner of Grange Grove in Champaign. Programming for the Illinois-Wisconsin game starts at 9 a.m. 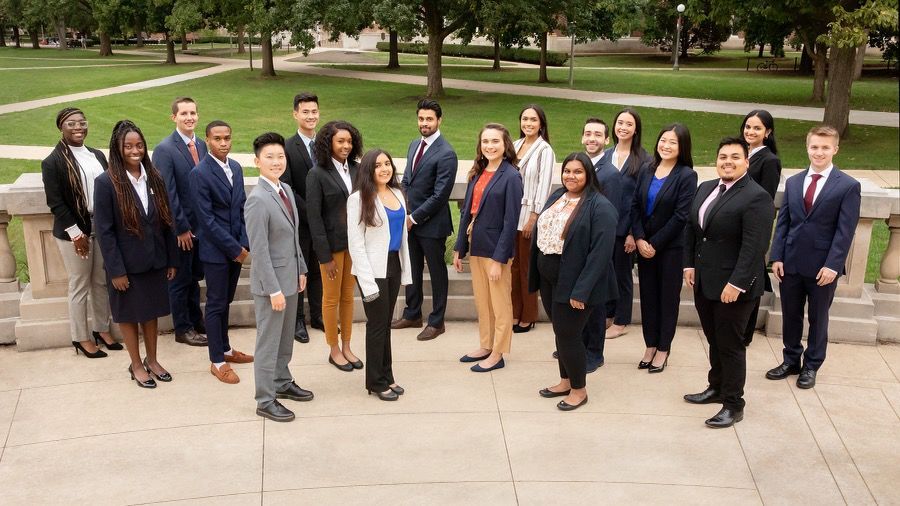 The members of the University of Illinois 2021 homecoming court. 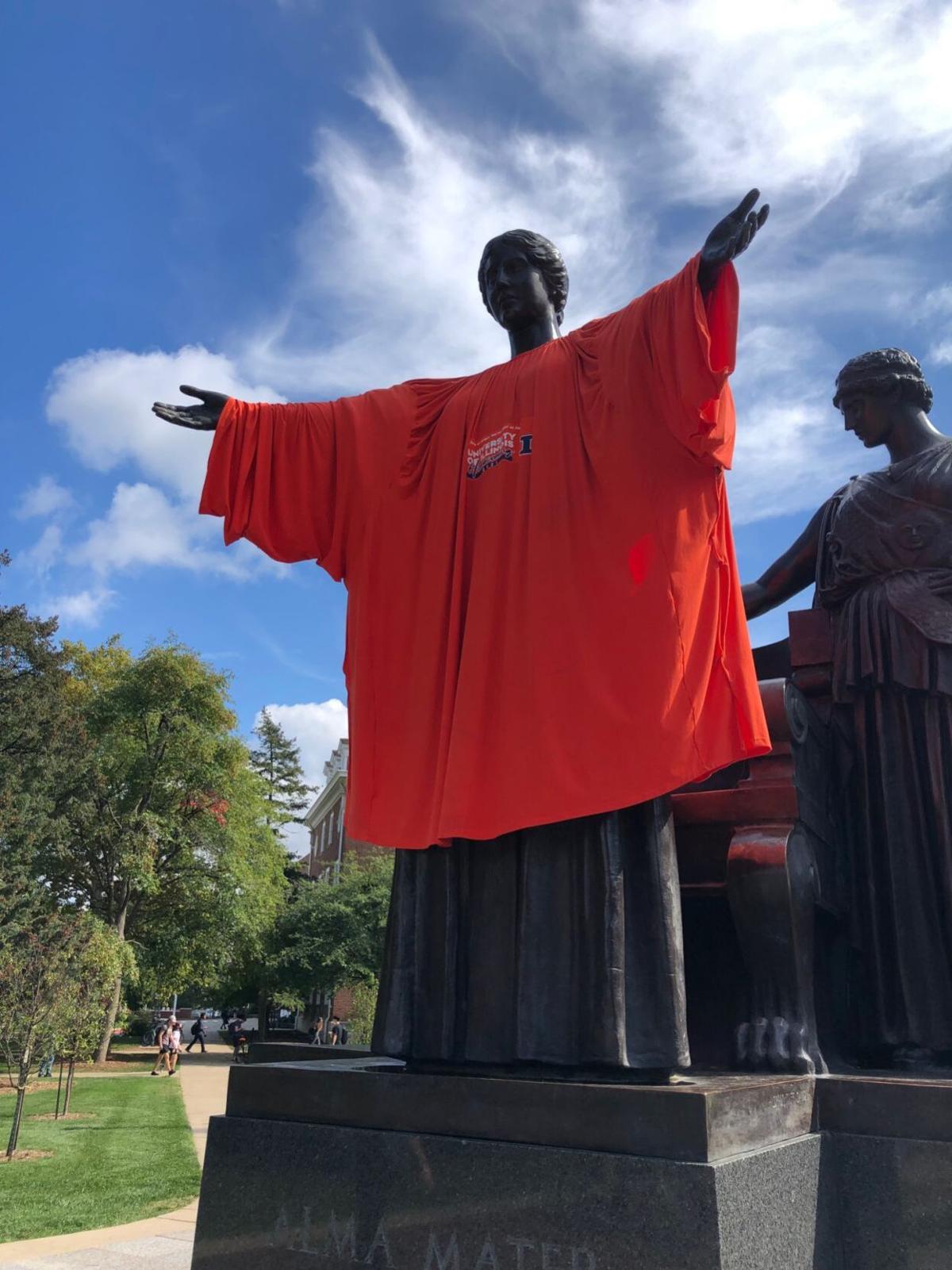 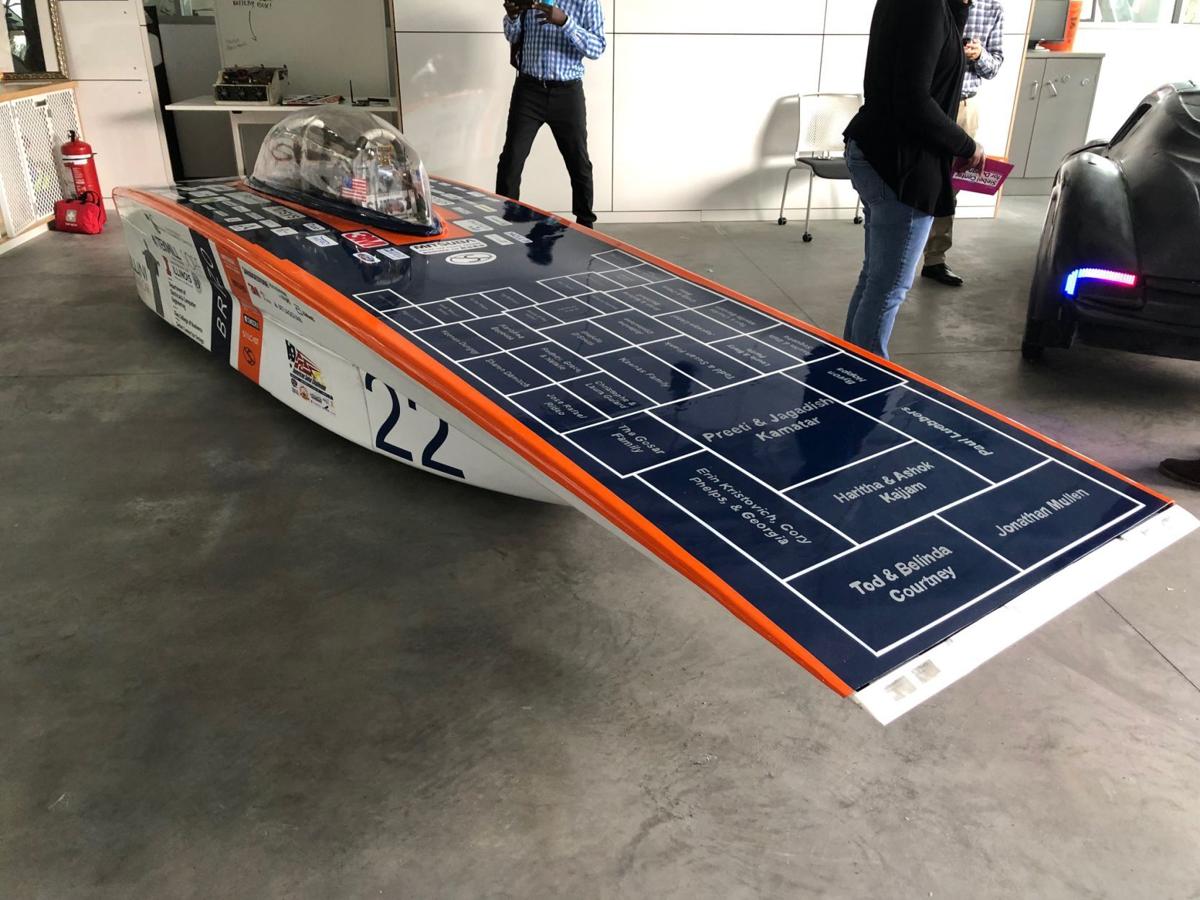 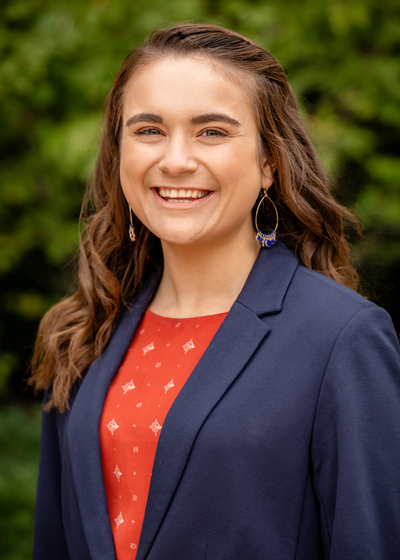 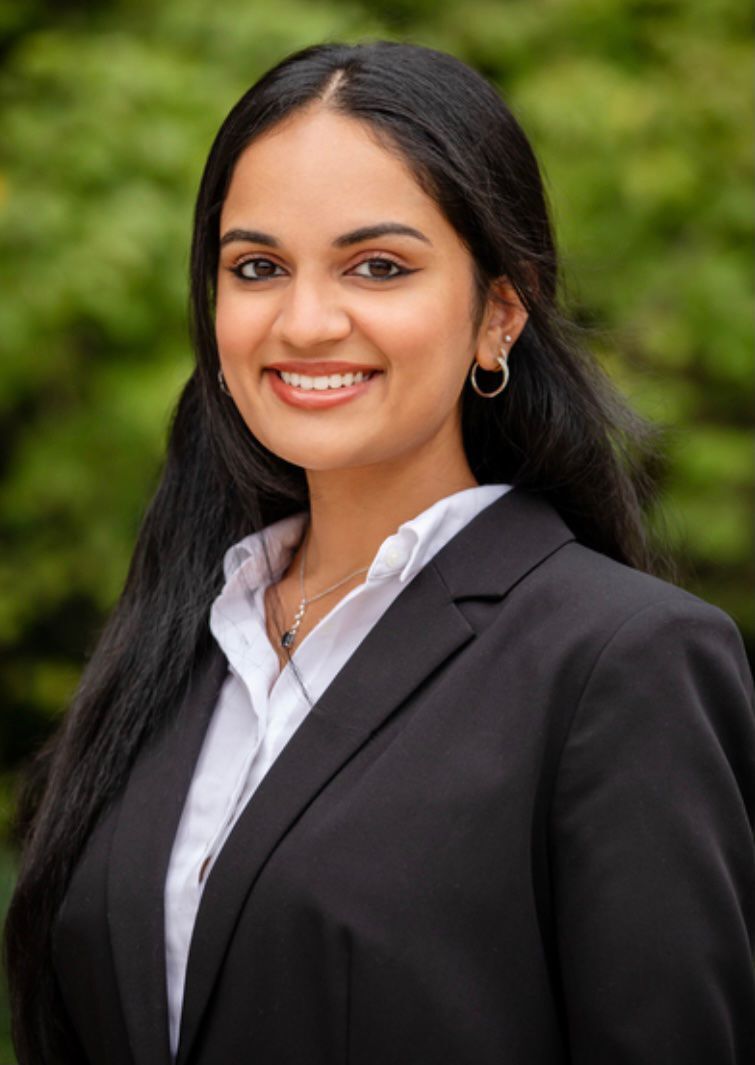 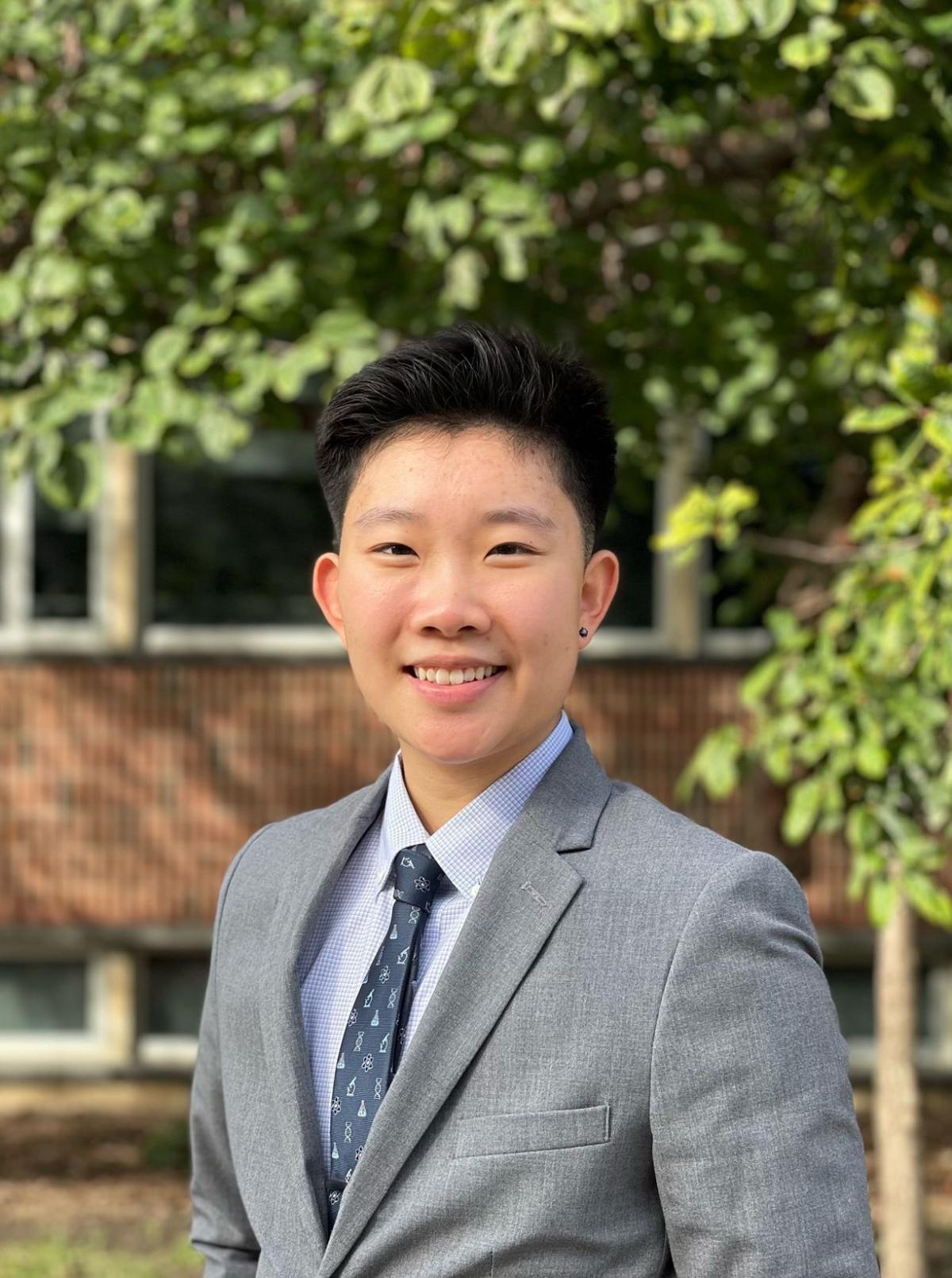 Champaign Central High School teacher Kristina Castillo, a 1997 University of Illinois graduate, goofs around Friday in front of a fountain dyed orange for homecoming week near the Alice Campbell Alumni Center in Urbana.

Big Ten Network lighting technician Jim Cortez, left, and lighting director Austin Corcoran set up lights Friday on the set for the network’s broadcast/tailgate area at the southwest corner of Grange Grove in Champaign. Programming for the Illinois-Wisconsin game starts at 9 a.m.

The members of the University of Illinois 2021 homecoming court.

CHAMPAIGN — Ask for Hannah Spangler’s favorite moment on the University of Illinois campus, and her answer is clear: Homecoming day, freshman year.

It seems a funny choice, given that the 2018-19 Illini football team lost a brutal game that day to Purdue, 46-7, but Spangler said the school pride and joy she felt with her cohorts at the 4-H House Cooperative Sorority was enough.

“I could see this school means so much to the students and especially alumni,” she said. “To see their faces and how proud they were was the biggest experience for me, that I was meant to be here, and this a special school.”

Four years later, Spangler is one of 20 high-achieving UI seniors selected for the homecoming court for their campus leadership and community service.

They’ll ride in today’s homecoming parade, which steps off at 11 a.m., and come onto the Memorial Stadium field to wave at fans at halftime against Wisconsin.

And Spangler’s given serious thought to that tradition. Her older sister, Kaity, who was selected for homecoming court in 2017, had pointed advice for her little sister: Acknowledge the fans behind you.

“You can bet when they say ‘Hannah Spangler,’ I’ll be waving at both sides,” she said.

She’s an Illini through and through; two of her uncles went to the UI, as did two of her aunts, her grandma and her sister. The latter two and Aunt Holly all lived in the 4-H House as well.

Some of the homecoming additions are blazing their own trail, like first-generation college student Alliyah Rumboldt-Lemond, a senior majoring in journalism and sociology.

Rumboldt-Lemond said she’s “big on diversifying the university and retention in the Black community on campus.”

She interns at the Bruce D. Nesbitt African American Cultural Center and coordinates the Shelley Ambassadors, which encourages students of color to consider the school, whose total African American enrollment currently sits around 5.4 percent, including 6 percent among undergraduates.

A couple of her sisters at the historically Black Delta Sigma Theta sorority, Cierra McCullough and Courtney James-Atkins, were also selected for this year’s court.

“I’m really excited for this to be the revival of campus,” she said. “I can already see all the alumni walking to campus right now. I can’t wait until I get to represent my community on Saturday.”

This year’s cohort, as usual, brings a variety of academic interests and campus involvements. Take Ria Ravi, who has volunteered since freshman year at Carle Foundation Hospital and Avicenna Health Clinic, which serves underrepresented, underinsured populations in Champaign-Urbana.

Beyond that, she used to tutor kids at International Prep Academy in Champaign, and she serves as president of the all-female a cappella group Illinois Rip Chords.

“I’ve tried to center a lot of community service on giving back to kids,” Ravi said.

After going through the nomination, application and interview process to make the court, she’s most excited for one event today: the tailgate with Chancellor Robert Jones.

“He’s one of those beings who you don’t expect to meet or talk to him because he’s such a big guy on campus,” Ravi said.

Even for the court members who’ve never attended homecoming, like fifth-year bioengineering senior Evan Ko, the honor is palpable.

“To be one of 20 other seniors who are exceptionally involved on campus and in the communities and spaces we’re involved in, to be recognized as our full, authentic selves is so rewarding,” Ko said. “It’s very validating to be seen as who I am and not a performative act.”

Ko has spent his five years on campus trying to make the engineering discipline a better, more inclusive space through Engineering Ambassadors, which reaches out to districts like Champaign Unit 4 and the Chicago Public Schools system.

“We try to reiterate engineering is about problem-solving and breaking down stereotypes that you have to look a certain way to be an engineer, while triggering the inner curiosity of students to pursue it,” he said.

Ko admits he hasn’t put a ton of thought into the nerves and excitement of waving at halftime. But he’s bringing along his partner and a childhood friend’s parents who have supported him throughout his collegiate career.

“It’s a chance to give back to them,” Ko said. “Their daughter actually went to school in Madison, so I’m currently getting T-shirts for them that aren’t Wisconsin red.”