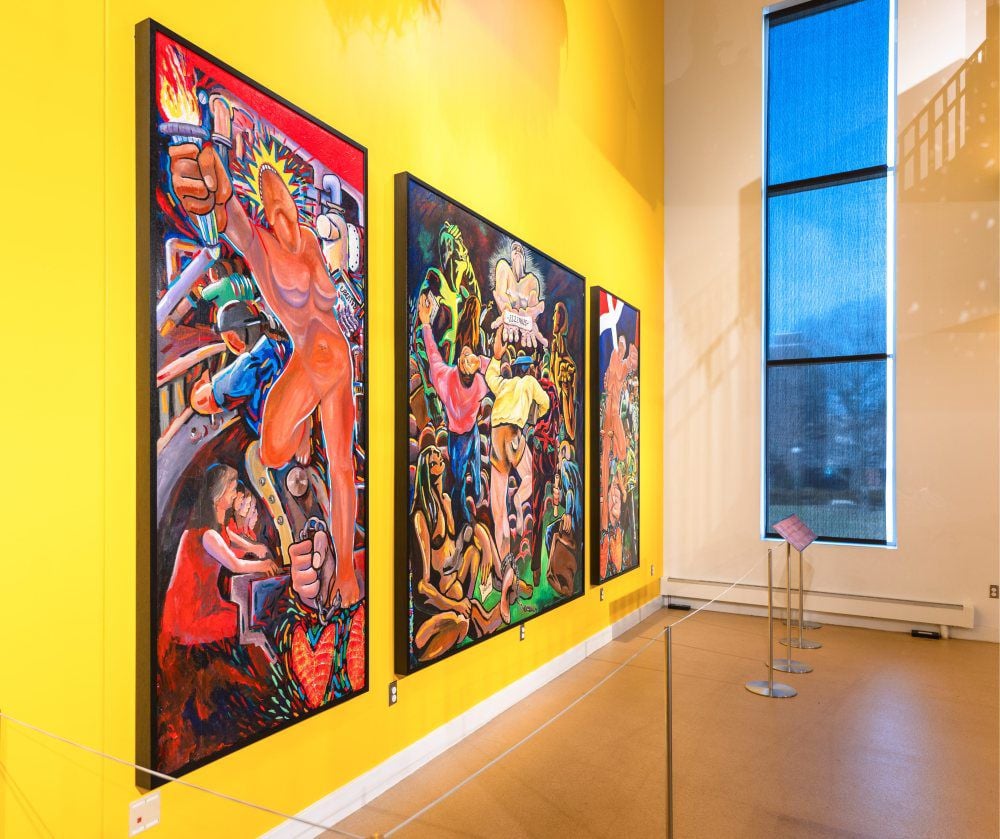 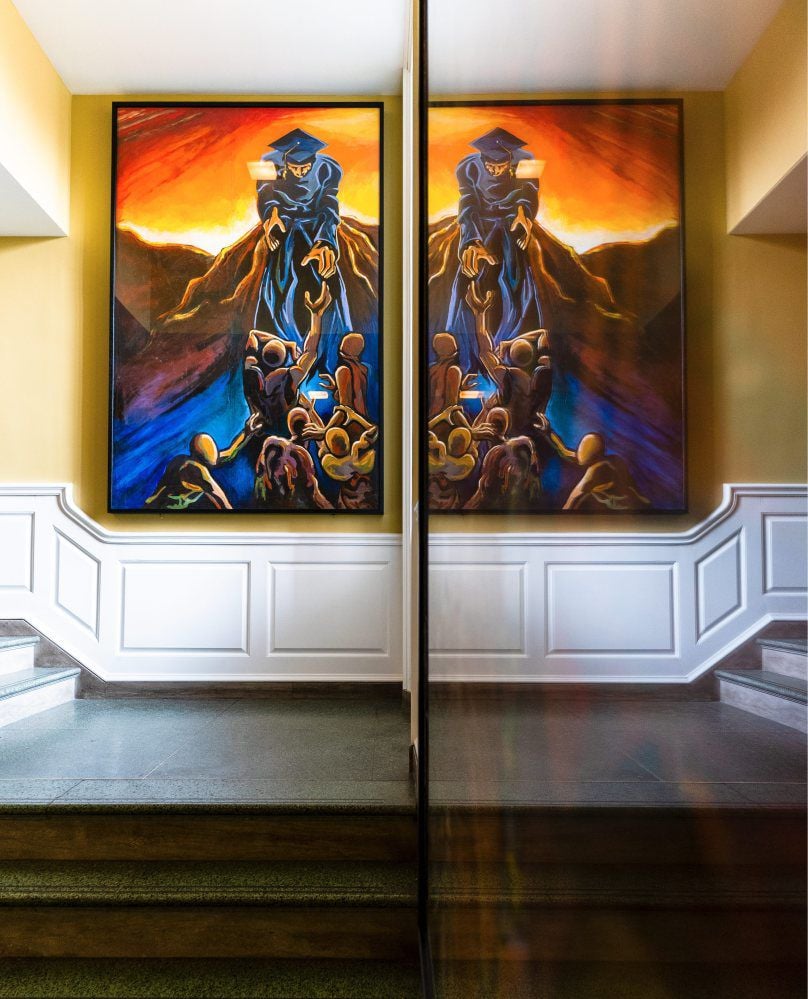 A painting that shows a Latino graduate helping future generations, which was extracted from Oscar Martinez's mural at La Casa Cultural Latina, now hangs in the southwest stairwell at the Illini Union. 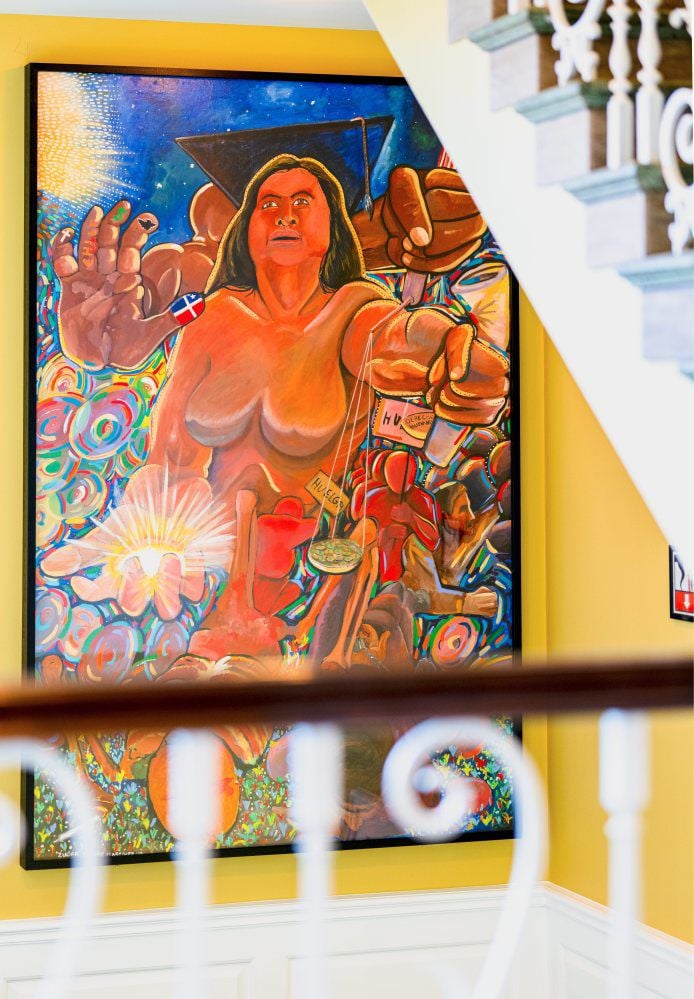 A painting that shows a Latino graduate helping future generations, which was extracted from Oscar Martinez's mural at La Casa Cultural Latina, now hangs in the southwest stairwell at the Illini Union.

URBANA — Oscar Martinez was fully aware of the risk he was taking with each brushstroke, so every so often, he glanced out the window to see if police were coming. Before he began painting the walls of the living room of what is now known as La Casa Cultural Latina 45 years ago, he made sure the back door was unlocked in case he needed to run.

The University of Illinois had finally given Latino students a home where they could gather on campus after years of protests and demonstrations. But there was a catch.

“As soon as we got the house, we learned that what we called La Casa was scheduled for demolition,” said Martinez, who was a junior at the time. “So during our many meetings talking about the different events that we would have at La Casa, I suggested that one way to be able to protect the house, especially since we would eventually graduate and leave, was to paint a mural.”

The mural would become more prominent and permanent than he ever imagined.

In 2016, when the original house on Chalmers Street in Urbana was finally slated for demolition for a different reason than Martinez feared — the organization had moved into a larger building three years earlier — Latino campus leaders and officials from Spurlock Museum and the UI’s Facilities and Services Department came together to brainstorm the mural's extraction.

Like the house, Martinez expected his mural to turn to dust. After all, he painted directly on the wallpaper, over light sockets, on the windows and on top of molding. But officials eventually decided to remove the entire walls and split it into multiple pieces.

The $380,000 process, which was paid for by the UI, ended this month, when two paintings were hung in the southwest stairwell of the Illini Union, and three were displayed at Spurlock Museum, where they’ll remain for the next 10 years.

Martinez simply wanted to carve out a small piece of campus where he felt like he belonged.

The university, Martinez knew, might not take kindly to the mural. While some may have seen it as defacing campus property, he and the fellow members of student organization La Colectiva Latina saw the mural as protecting the house.

So Martinez began painting something that was not only decorative, but emotive. The mural was bright and colorful, but also contained “darkness, sadness, happiness, despair, life and hope,” he said.

With the little money he had, he bought acrylic paint to cover the walls. After researching famous Mexican murals, he crafted works of art that drew from the Latino student experience, including the struggles they faced and the kinship they felt.

In one piece, a Latino graduate on a mountaintop turns around to lift other students up. Others address the desire to maintain a cultural identity while feeling pressure to assimilate.

“I wanted to capture the images of the Latino students as we all struggled to succeed at the university, and I wanted to portray the challenges in retaining our cultural identity as we worked to be accepted by the mainstream,” he said. “I wanted the light parts of the mural to talk about clarity, self-respect and the respect of others, and I wanted the mural to allow for an open dialogue between students and others.

Martinez never thought he’d wind up at Illinois. He came from a single-parent household and was “very poor,” he said, and he didn’t think he’d meet the academic requirements.

A friend, though, encouraged him to apply and put in for financial aid. To his surprise, Martinez was accepted.

“I kept reading the letters thinking that they made a mistake, and I kept looking for the other letter that would say, ‘Excuse me, we made a mistake,’” Martinez said. “I didn’t get that letter and I said, ‘Well, I guess I’m going to college.’”

As he stepped off the train in Champaign, he was in awe of the size and beauty of the campus. But it wasn’t exactly filled with students from a similar culture. The native Puerto Rican was one of just 240 Latino students.

He participated in demonstrations with La Colectiva Latina, who requested that the university hire a recruiter a counselor for Latino students along with a central gathering place.

The university finally relented in 1974, giving the organization the two-story Chalmers Street house. As Martinez planned his mural, he wanted to make sure he painted something that resonated not just with the current Latino student but also future ones.

“I didn’t want the mural to be just a decorative mural,” he said. “To me, that was very important, because if students can be part of something like that, then future generations would protect the mural, and therefore would protect La Casa.”

Even though he loaded his schedule with 26 credit hours, he’d make the trip to the house in between study sessions to paint for a few hours each evening, and every weekend, he devoted one full day. Eventually, he had to water down his paints as he began to run dry.

Martinez left campus for Illinois-Chicago the next year, but the images on the walls had staying power in the ensuing decades as Latino students fought for better treatment.

“It was a very important piece,” said Alicia Rodriguez, who was a graduate student at Illinois from the mid-’80s to the mid-’90s. “People were always curious and always wanted to see (the mural) more and what it represents.”

In 1992, Latino students staged a sit-in at the Henry Administration Building after discussions stalled between administration and Latino student leaders, who pressed the UI about issues ranging from student retention and the recruitment of Latino students and staff to supporting the cultural center and getting rid of Chief Illiniwek.

A Latina/Latino studies program was created four years later, and in 2003, it became the Department of Latina/Latino Studies, where Rodriguez works as an academic advisor and administrative coordinator.

“I admire students who came after me,” Martinez said. “They embraced the mural and its symbolic meaning and they themselves began to protest to change things at the U of I, and as a part of those efforts, Latino/Latina studies was born, and also the new La Casa was born because of the students willing to put their future on the line to make a positive change at the university.

“I believe that diversity made a better university, which is now embraced by almost all universities across the nation.”

Martinez was commissioned by the UI to finish and touch up the mural in 2004, when he added a painting to the ceiling. This one was done on canvas for the purposes of preservation, and it had a different theme from the pieces on the walls that signified struggle.

“The ceiling was supposed to be the place where all of the aspirations we had as a community come together,” he said.

Martinez never intended for the mural to be cut apart and viewed as separate pieces, and the final product caught him by surprise.

“I saw the photographs (of the paintings), and it felt like I was looking at somebody else’s artwork, and I was stunned,” Martinez said. “I saw so much beauty and reflection of who I am. I wasn’t expecting that. The mural, in a way, transcended me. It meant so much to see them looking like that.”

The university will hold a public viewing in the Illini Union’s South Lounge from 11 a.m. to 1 p.m. today, when Martinez will speak and see the paintings on display for the first time. Then, a closed reception will be held from 4:30 to 6 p.m. at Spurlock Museum.

In 1974, Martinez simply wanted a small slice of campus to belong to his culture. While he acknowledges there’s work to do, things have changed more than he ever expected in the last 45 years. Now, around 10 percent of Illinois students are Latino, and symbols of their struggle will forever have a place on campus.

“To have it on permanent display at the Union is the most incredible acknowledgement that I can ever imagine would happen with the mural,” he said. “I’m very proud, but I also understand that this came about because of the students’ continued support and their willingness to make this happen. The fact that they embraced the mural and understood the symbolic meaning behind a lot of the different pieces, that’s an honor.

“I’m beside myself. I never thought that a work of mine would get that much attention.”