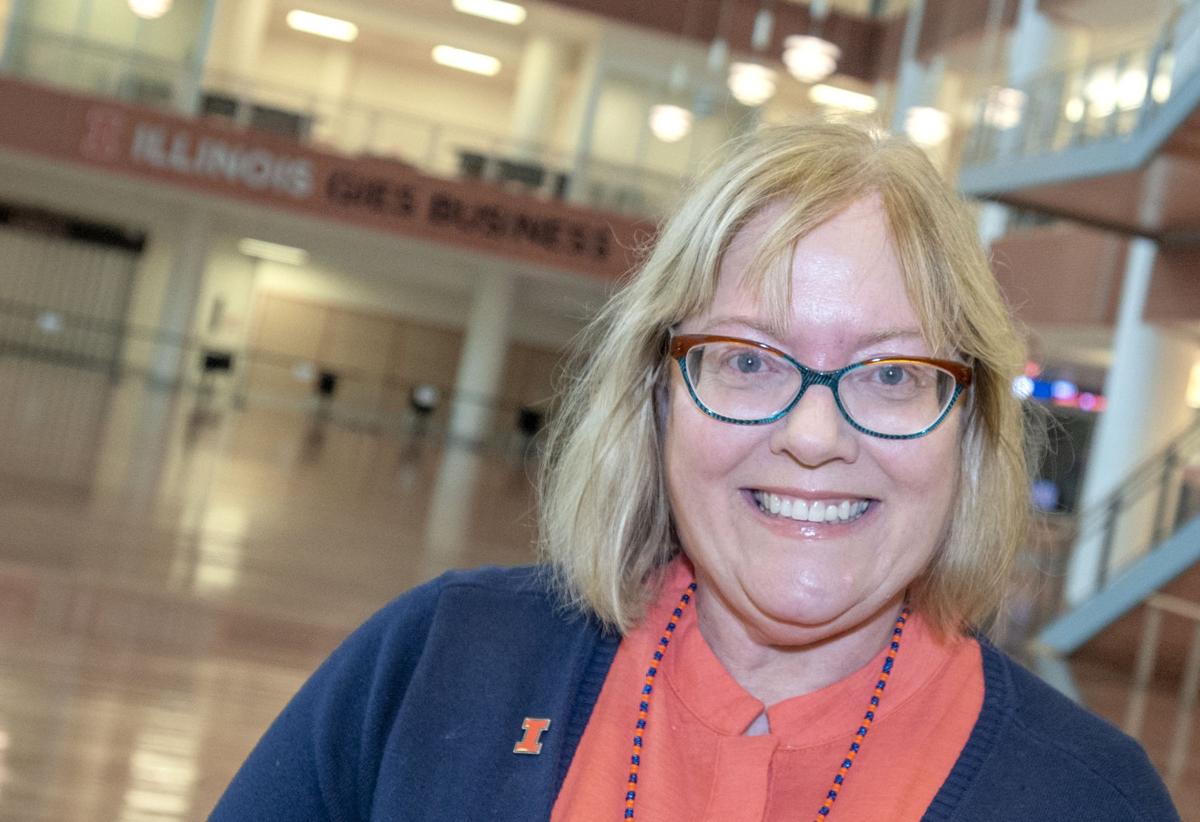 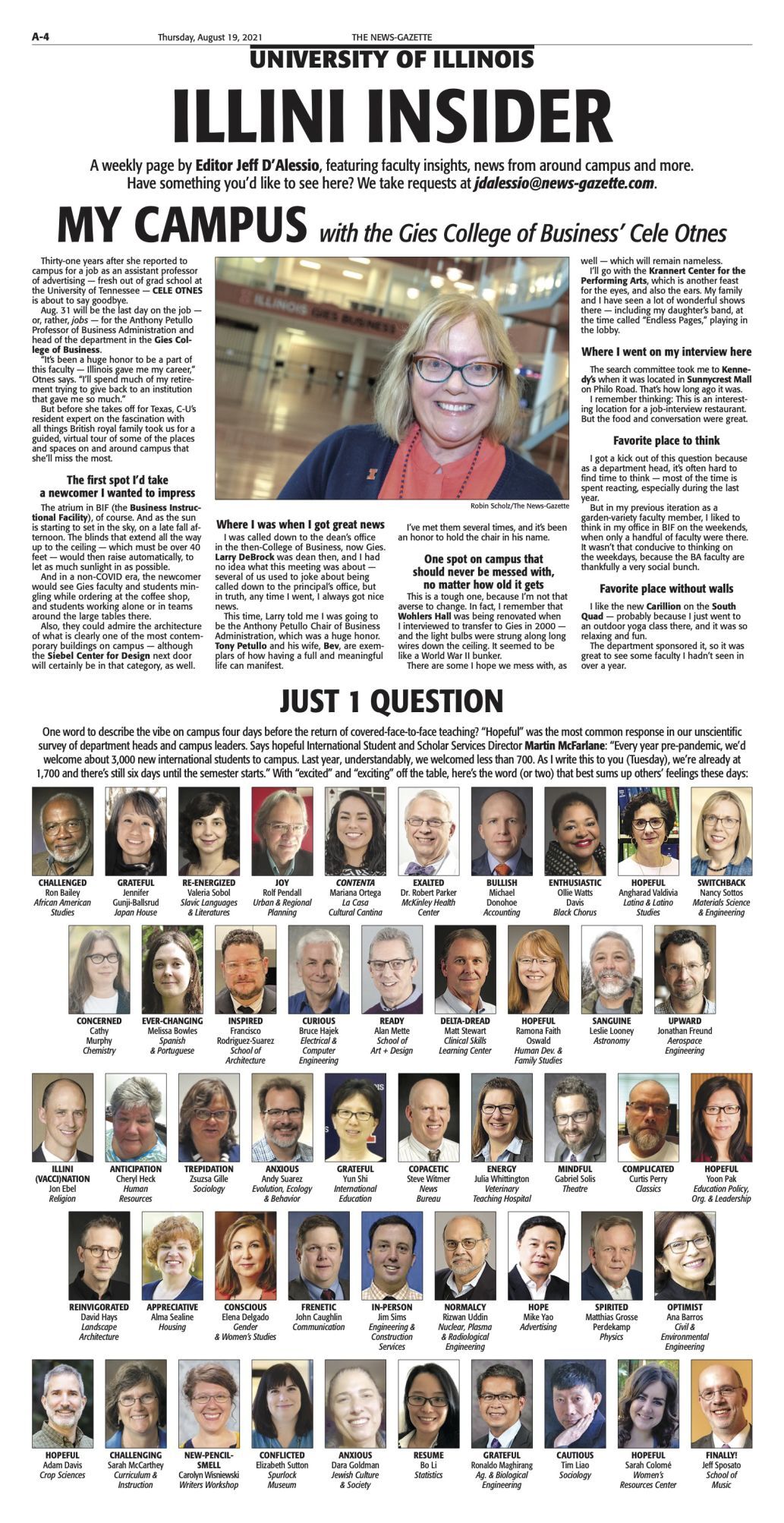 Thirty-one years after she reported to campus for a job as an assistant professor of advertising — fresh out of grad school at the University of Tennessee — CELE OTNES is about to say goodbye.

Aug. 31 will be the last day on the job — or, rather, jobs — for the Anthony Petullo Professor of Business Administration and head of the department in the Gies College of Business.

“It’s been a huge honor to be a part of this faculty — Illinois gave me my career,” Otnes says. “I’ll spend much of my retirement trying to give back to an institution that gave me so much.”

But before she takes off for Texas, C-U’s resident expert on the fascination with all things British royal family took us for a guided, virtual tour of some of the places and spaces on and around campus that she’ll miss the most.

The atrium in BIF (the Business Instructional Facility), of course. And as the sun is starting to set in the sky, on a late fall afternoon. The blinds that extend all the way up to the ceiling — which must be over 40 feet — would then raise automatically, to let as much sunlight in as possible.

And in a non-COVID era, the newcomer would see Gies faculty and students mingling while ordering at the coffee shop, and students working alone or in teams around the large tables there.

Also, they could admire the architecture of what is clearly one of the most contemporary buildings on campus — although the Siebel Center for Design next door will certainly be in that category, as well.

I was called down to the dean’s office in the then-College of Business, now Gies. Larry DeBrock was dean then, and I had no idea what this meeting was about — several of us used to joke about being called down to the principal’s office, but in truth, any time I went, I always got nice news.

This time, Larry told me I was going to be the Anthony Petullo Chair of Business Administration, which was a huge honor. Tony Petullo and his wife, Bev, are exemplars of how having a full and meaningful life can manifest.

I’ve met them several times, and it’s been an honor to hold the chair in his name.

One spot on campus that should never be messed with, no matter how old it gets

This is a tough one, because I’m not that averse to change. In fact, I remember that Wohlers Hall was being renovated when I interviewed to transfer to Gies in 2000 — and the light bulbs were strung along long wires down the ceiling. It seemed to be like a World War II bunker.

There are some I hope we mess with, as well — which will remain nameless.

I’ll go with the Krannert Center for the Performing Arts, which is another feast for the eyes, and also the ears. My family and I have seen a lot of wonderful shows there — including my daughter’s band, at the time called “Endless Pages,” playing in the lobby.

Where I went on my interview here

The search committee took me to Kennedy’s when it was located in Sunnycrest Mall on Philo Road. That’s how long ago it was.

I remember thinking: This is an interesting location for a job-interview restaurant. But the food and conversation were great.

I got a kick out of this question because as a department head, it’s often hard to find time to think — most of the time is spent reacting, especially during the last year.

But in my previous iteration as a garden-variety faculty member, I liked to think in my office in BIF on the weekends, when only a handful of faculty were there. It wasn’t that conducive to thinking on the weekdays, because the BA faculty are thankfully a very social bunch.

I like the new Carillion on the South Quad — probably because I just went to an outdoor yoga class there, and it was so relaxing and fun.

The department sponsored it, so it was great to see some faculty I hadn’t seen in over a year.

"I will just be happy to be back on campus. It will be bittersweet because so many of my students graduated over the last 16 months. Under normal circumstances, I would have had the chance to read their names and celebrate their achievements as they participated in graduation ceremonies."

My Campus: Swanlund Chair of Entomology May Berenbaum

"Whenever I’m worried about insect decline and the 'beepocalypse,' a visit to the Pollinatarium prairie — camera in hand — reminds me that there are tiny but safe refuges for our native plants and for the spectacular diversity of insect species that have made their homes in Illinois long before people showed up on the scene."

"As a Floridian that just so happened to interview here in the month of February, I was enchanted by the snow. So, my host took my wife and I on a brief nighttime walk through the Quad during a light snow. The scene was quite remarkable for this Florida boy."

My Campus: Center for Innovation in Teaching and Learning's Jason Mock

“I’ve been back to the Armory for all of maybe two hours since mid-March 2020. As a raging introvert, I’ve been quite comfortable holding meetings via Zoom, but I would like to see three-dimensional coworkers once again.”

“It’s the best job I have ever had. The department is phenomenal and I love, love, love my students — they keep me young. I’m excited to be back in person with them this fall.”

“I have been fortunate to have many successes in my career, but one that stands out in my memory was my recent recognition as a Laura Hahn Faculty Fellow,” says the UI's teaching associate professor of bioengineering.

Award-winning UI special education professor Meghan Burke tells us about her favorite stops on and around campus — from the Early Intervention Clearinghouse ("a hidden gem") to the Illini Union (a favorite of son Rogan's).

Honored recently with an Illinois Student Government Teaching Excellence Award, the Guyana-born professor takes us for a virtual tour of some of her favorite spots on a campus she hasn't been to since March 13, 2020.

The Indialantic, Fla., native takes us on a guided, virtual tour of her favorite spots — from Intermezzo Café (for the Friday monster baked potato special) to South Farms ("a big research playground that always impresses my visitors").

The professor of cell and developmental biology and director of the UI’s Neuroscience Program takes us on a guided, virtual tour of her favorite spots — from The Quintessential Engineer sculpture to Krannert Center.

Among the Pakistan-born, Purdue-educated professor's favorite stops: Bardeen Quad, Japan House, KoFusion and Engineering Hall, where in 2019 he remembers hearing that the Grainger Foundation "wanted to make a transformational naming gift to our college."

This being National Library Week, we invited John Wilkin — the UI’s Dean of Libraries and University Librarian — to tell us about his favorite campus places and spaces as part of Thursday's Illini Insider page.

“After 29 years in town, home is here," says the German-born ultramarathoner, whose top spots include Krannert’s Foellinger Auditorium, Manolo’s, the Engineering Quad and Altgeld Hall's stacks.

Ahead of a two-day virtual open house that kicks off Friday, Beckman Institute Director and two-degree UI grad Jeff Moore takes us for a guided tour of some of his favorite spaces and places on and around campus.

The London native's top spot? "It would have to be the Quad, early in the morning before breakfast, with a mist and chill in the air. Quintessentially Illinois."

The College of Media’s first Dean’s Fellow for Diversity takes us for a guided, virtual tour of some of his favorite places and spaces on and around campus, from the second floor of the main library to the Quad at 1 p.m. on a spring day (in non-pandemic times).

The Japan House director takes us on a tour of her favorite campus spaces and places, including the building where she saw her most memorable concert (MC Hammer) and cheered on the Illini big man whose nickname she borrowed (George "Big G" Montgomery).

'Whether I walk through in the calm of a wintry morning to begin work early, or I stroll around on a late summer afternoon amid a flurry of activity, (the Main Quad) is always welcoming. Even now during the COVID-19 measures when I am working from home, I can observe it through the Quad Cam.'

"You never know who or what is going to walk in the emergency room door here. It could be a millionaire or a homeless person. It could be a chicken or a chihuahua. But there is comfort in the chaos because it feels like home."

'One of my happiest professional moments at Illinois was just this spring when I learned that the program I direct, the MS in Library and Information Science, had again been named, by U.S. News & World Report, the No. 1 program in the country.'

New rankings: Grainger Engineering No. 6, UI No. 15 among public schools

Illinois remained No. 47 among national universities in U.S. World News & Report's Best Colleges rankings. That was good for fourth in the 14-team Big Ten, trailing only Northwestern (9th), Michigan (23rd) and Wisconsin (42nd).

Long before becoming the UI's Morris Professor of Materials Science & Engineering, then-Ph.D. student Ken Schweizer shared a campus home with a family of raccoons. "Most bizarrely, they learned how to climb a three-story fire escape and enter a hole in the roof, allowing them to run around inside the walls of the house."

"I am in love with the Arboretum, especially the majestic bald cypress. I take many walks there with my husband and little ones in all seasons. Just this last week, my daughter took her first steps in the Idea Garden."

Her welcome-to-campus moment came in 1993, when a fellow future UI professor she’d met in the Air Force in Texas brought MARNI BOPPART back to…

"As many folks know, I’m a townie. Being a first-generation college grad, resources were tight. My brothers put themselves through school. When my parents said to me ‘If you want to go to college, you’ll go to Illinois and you’ll live at home,’ my response was: ‘Thank you very much. That would be lovely.’"

Big 10: UI distinguished alums on their must stops when back in C-U

"As proud as I am of the virtual ceremonies that we in Atmospheric Sciences created for the May 2020 and 2021 graduations, I can’t wait for a return to in-person graduation in Krannert."

'I love the Morrow Plots at sunrise. It must be the farmer in me that appreciates starting off the day by watching the sun come up over a crop field,' says Danville native Kim Kidwell.