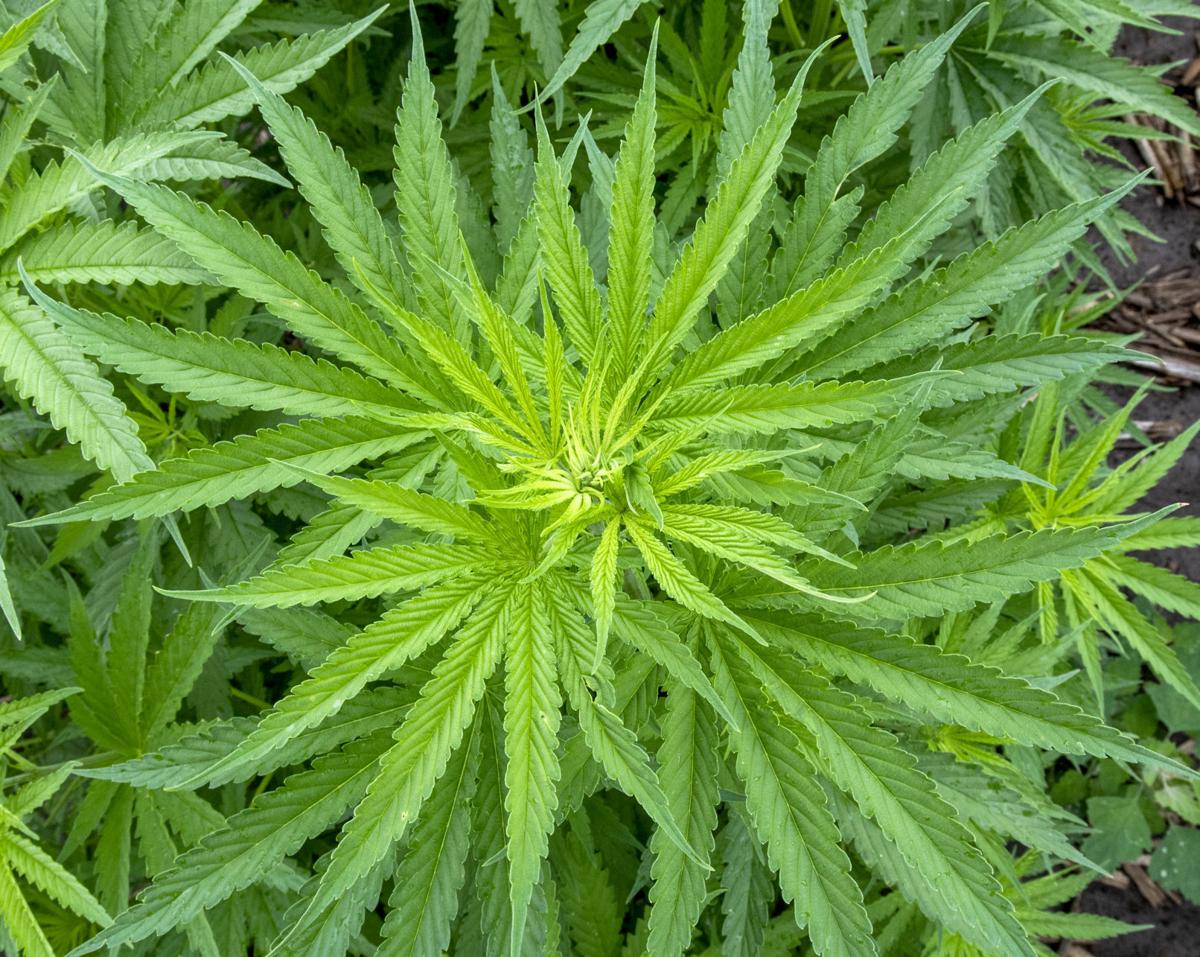 A form of hemp plant for CBD purposes, growing at the Sustainable Student Farm on UI campus in Urbana on Wednesday, June 30, 2021. Lee said these plants are under 5 feet tall at maturity and are harvested for their seeds. 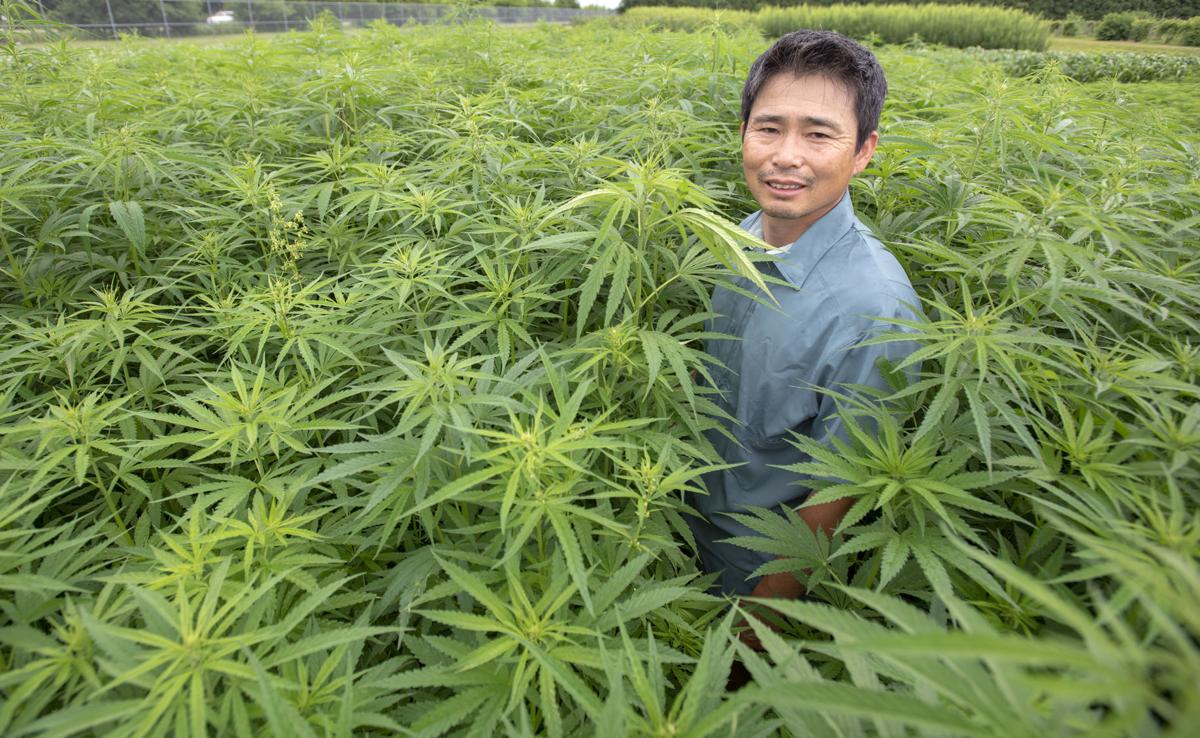 University of Illinois instructor D.K. Lee stands among the hemp plants he is growing at the Sustainable Student Farm in Urbana. The plants, grown for their fiber content, are about 5 feet tall. Lee said in a month they will be 13-15 feet tall. 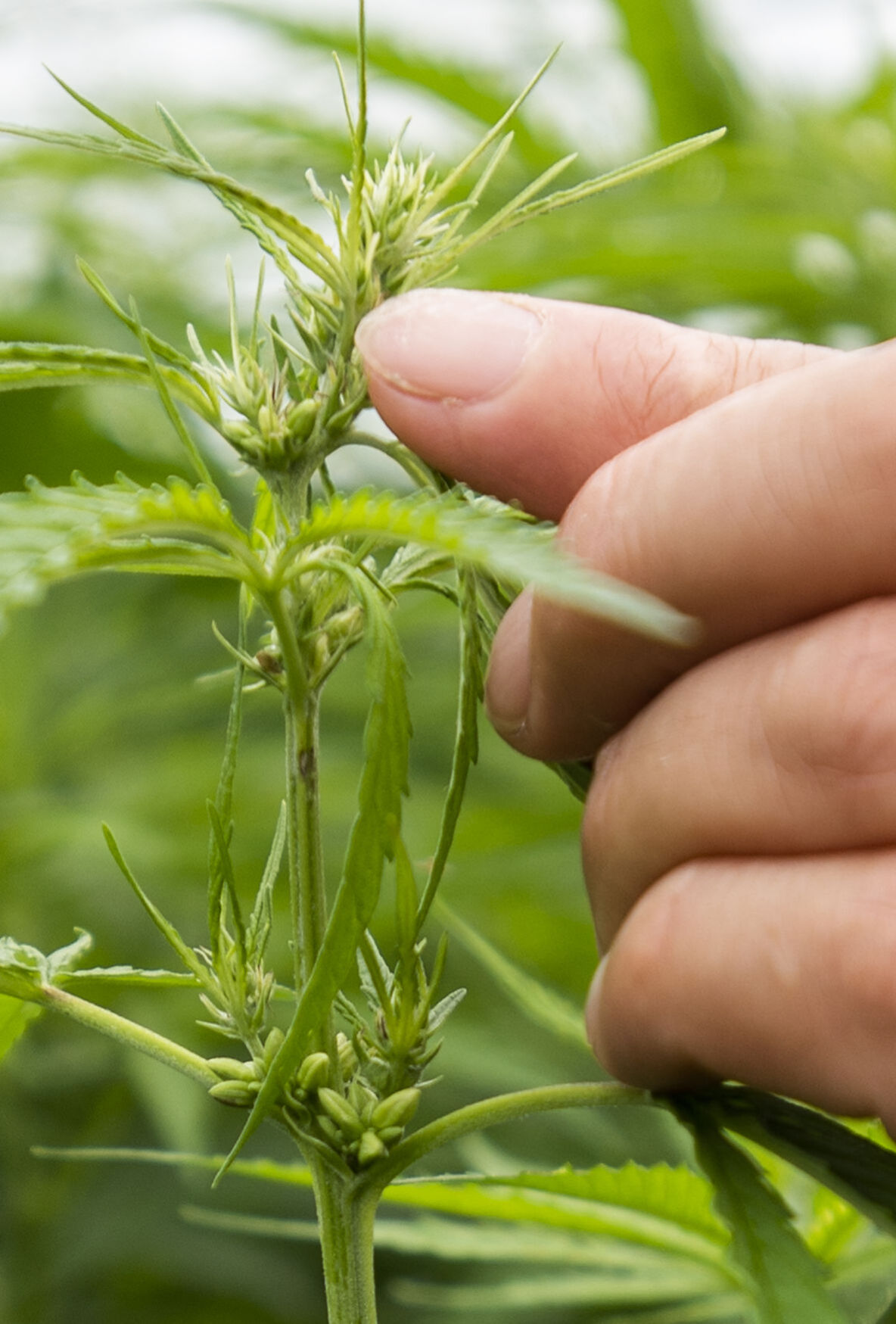 D.K. Lee points to the female parts of one of the hemp plants he is growing.

A form of hemp plant for CBD purposes, growing at the Sustainable Student Farm on UI campus in Urbana on Wednesday, June 30, 2021. Lee said these plants are under 5 feet tall at maturity and are harvested for their seeds.

University of Illinois instructor D.K. Lee stands among the hemp plants he is growing at the Sustainable Student Farm in Urbana. The plants, grown for their fiber content, are about 5 feet tall. Lee said in a month they will be 13-15 feet tall.

D.K. Lee points to the female parts of one of the hemp plants he is growing.

Did you know that Henry Ford built a car that was reinforced with hemp fiber and designed to use hemp oil as fuel?

Or that Presidents George Washington and Thomas Jefferson wrote about hemp production in their diaries?

How about the fact that cannabis is one of the oldest domesticated plants in human history, but the U.S. completely outlawed it in 1970, halting research progress?

Lee knows a lot about pot, which is great, since he’s leading a class about it this fall.

Crop Sciences 480: Cannabis Classification and Management is a brand-new synchronous online course at the University of Illinois, all about the versatile, profitable — and oft-misunderstood — cannabis plant.

Students and members of the public can take the course as part of the UI’s Cannabis Certificate program, a 12-credit-hour endeavor to prepare for jobs in the emerging cannabis production industry. The Department of Crop Sciences is in the College of Agricultural, Consumer and Environmental Sciences (ACES).

The class focus, Lee said, is providing clear-cut information about the maintenance and taxonomy of the cannabis species, and how its two main variants — hemp and marijuana — differ.

“There’s not a lot of good information on how to grow it,” said Lee, director of online programs for crop sciences. “Lots of YouTubes and a lot of stuff available, but not necessarily scientifically proven.”

Alongside a number of undergraduate volunteers, Lee oversees the biggest outdoor hemp nursery in the state, with about 7,000 individual hemp plants growing on the Student Sustainable Farm on Windsor Road.

Lee and his team have been breeding the plant since last October, selecting for genetic varieties that produce stronger fiber or seeds with more oil or protein within them.

They began transplanting the hemp plants into the field by hand this May.

“Research sounds fancy, but it’s a lot of work behind the scenes,” Lee said.

It’s all to provide a solid research base for a growing industry. Under the Industrial Hemp Act of 2018, hemp can be grown and sold by Illinois farmers. Higher education institutions could grow the plant for research purposes by 2015.

Hemp seeds are also nutrient-dense, good for their protein content and oil, which converts into a suitable biodiesel.

But for years, with cannabis being registered as Schedule 1 drug, research has been stymied. Lobbying from industry competitors slowed the process further, Lee said.

Even today, strict regulations on hemp production heighten the barrier to entry for prospective farmers.

“Let’s say a farmer plants 80 acres or 100 acres of hemp, and later on when they’re ready to harvest, the THC content is more than 0.3 percent. They have to destroy all of it,” Lee said. “That’s a big risk for the farmer.”

And it’s not always the farmer’s fault. With legal research so new in the state and country, new growers may have to grab hemp strains from fields in the rural Midwest. If the strain happens to have a slightly higher concentration of the psychoactive compound, tough luck.

So where does the 0.3 percent THC limit come from?

“If you smoke a weed flower that’s 0.3 percent THC, you get excited,” Lee said.

Barely, though. The recreational marijuana industry typically demands a THC concentration of 10 percent or higher.

Which brings Lee to another objective of his class: marijuana myth-busting.

A burgeoning industry comes with its drawbacks. An outpouring of new pot-based products leads to plenty of strange labels.

“The FDA hasn’t been really involved in controlling this stuff,” Lee said. “You go to a store for a CBD gummy, the labeling is all messed up.”

Lee saw this for himself while paying a visit to a dispensary in Michigan, where recreational weed has been legally sold since 2019.

That would mean all of the cannabinoids in the gummy were delta 8 THC, which is impossible.

So far, 40 campus students have signed up for Lee’s class. From what he’s gathered, there are two groups: those interested in indoor cannabis growing, and those who want to grow it as a crop.

The class opens to the public on July 12. Lee has already fielded some calls from interested amateur plant biologists, like one older student he spoke to recently.

“She told me, ‘I’m retired, I’ve been done with school for a long time, but I’d still like to get in the class, I’d like to learn how I can produce my own plant,’” he said.

Some industry leaders are catching on. Patagonia recently unveiled a hemp-based clothing line of 68 different products.