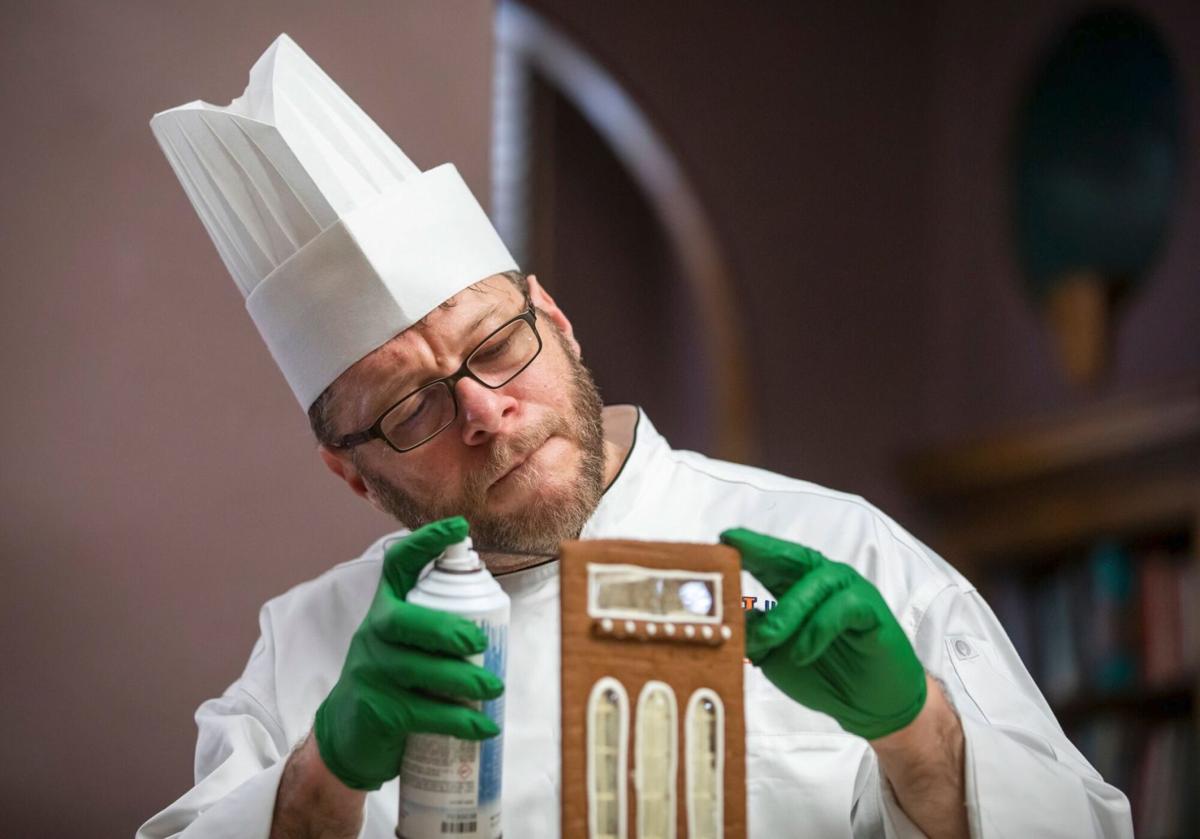 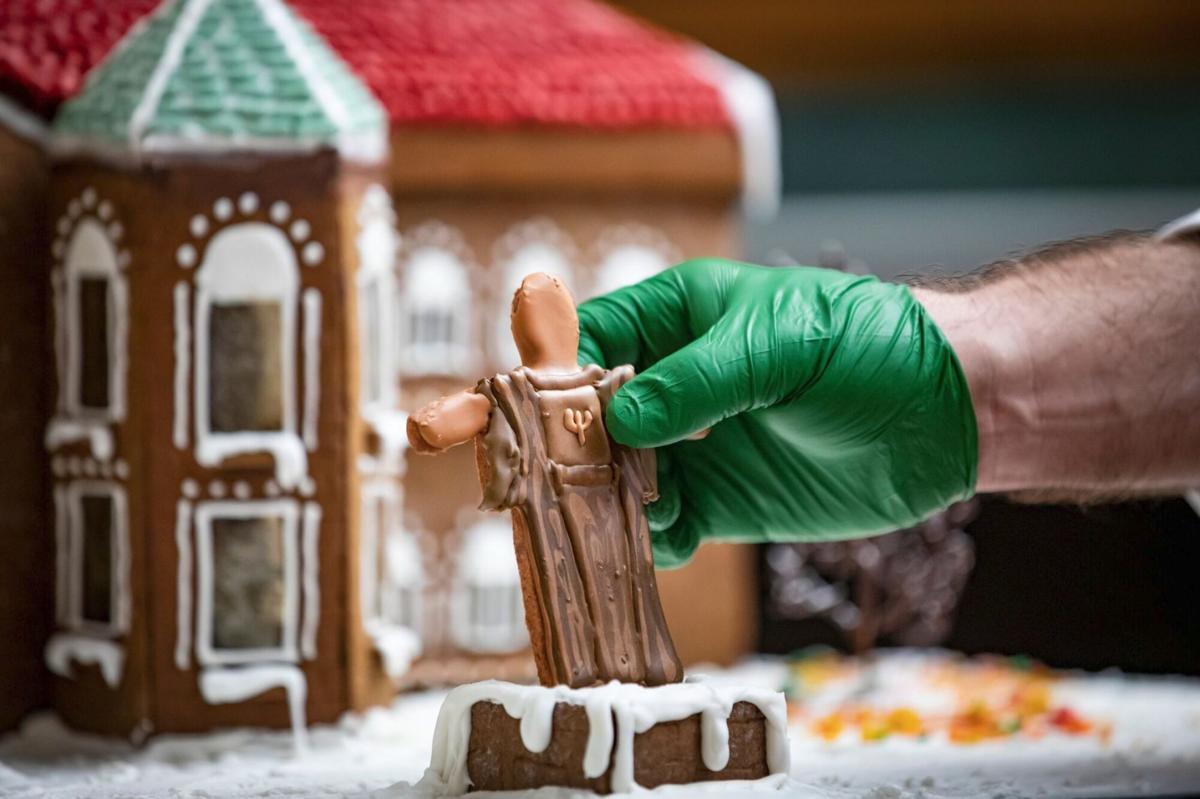 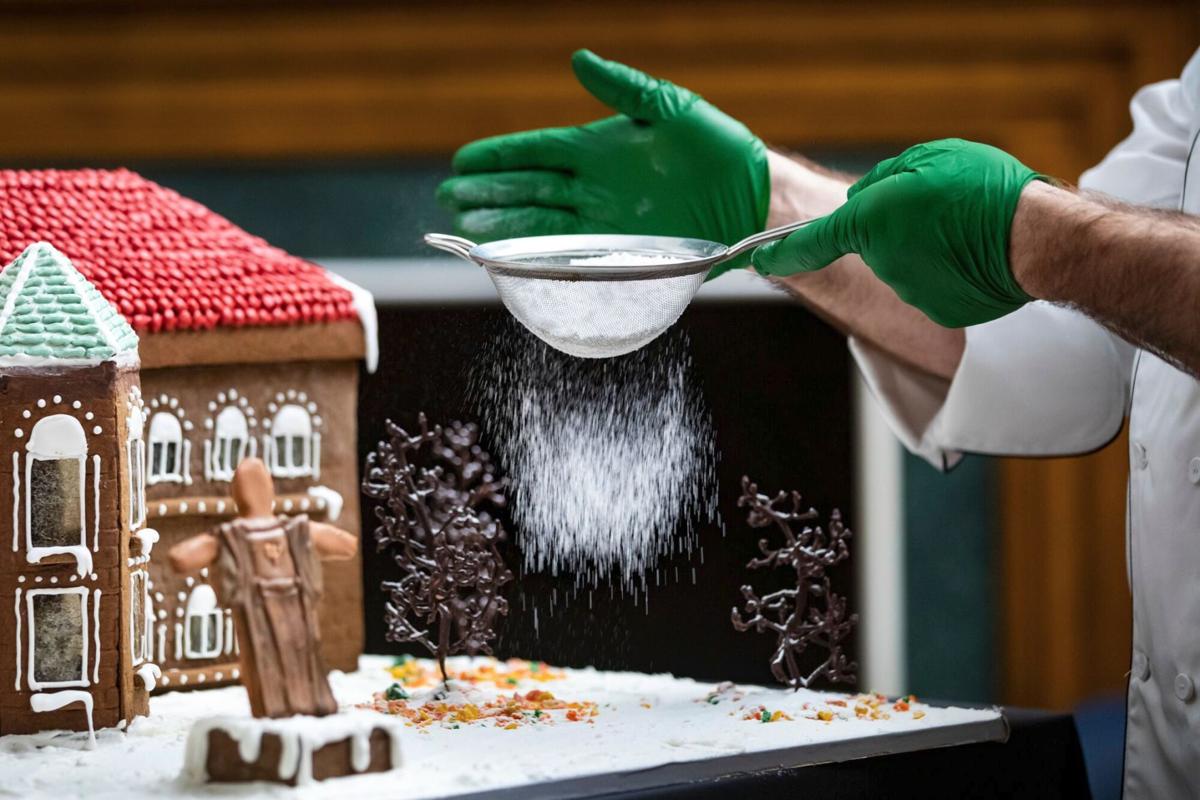 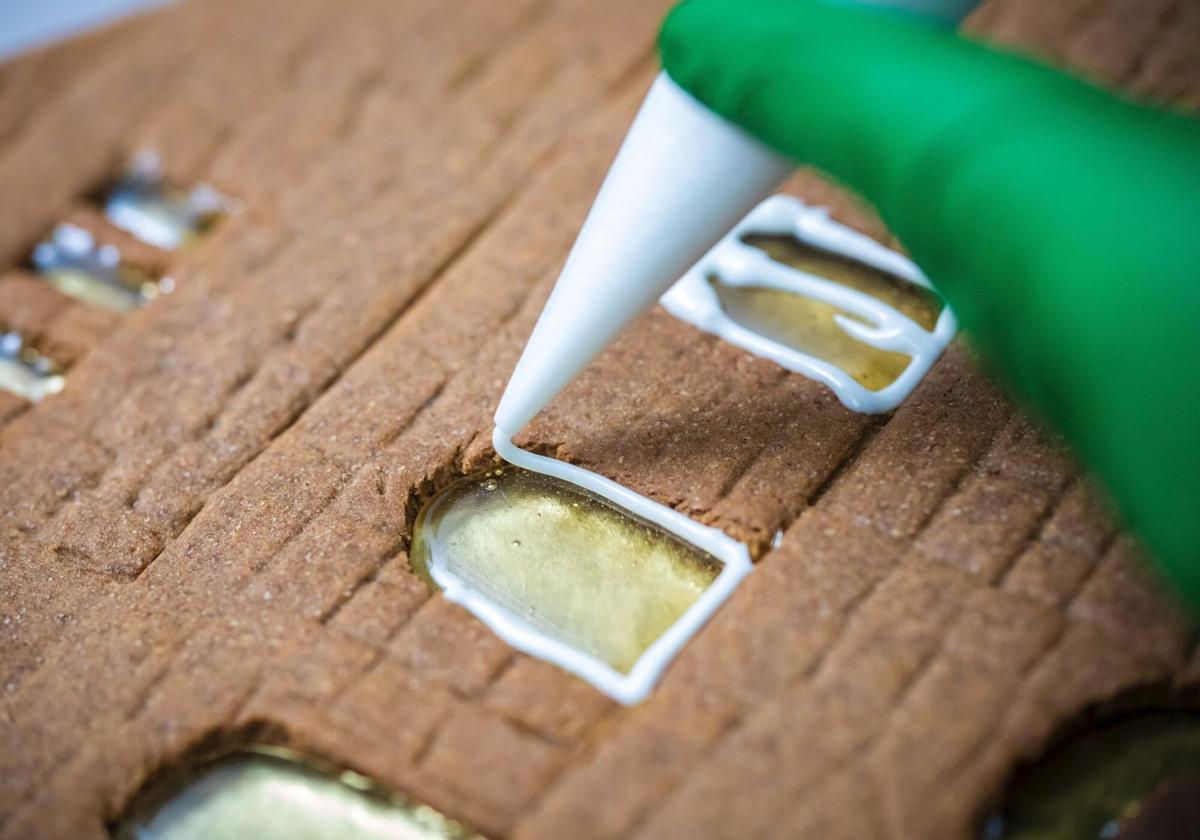 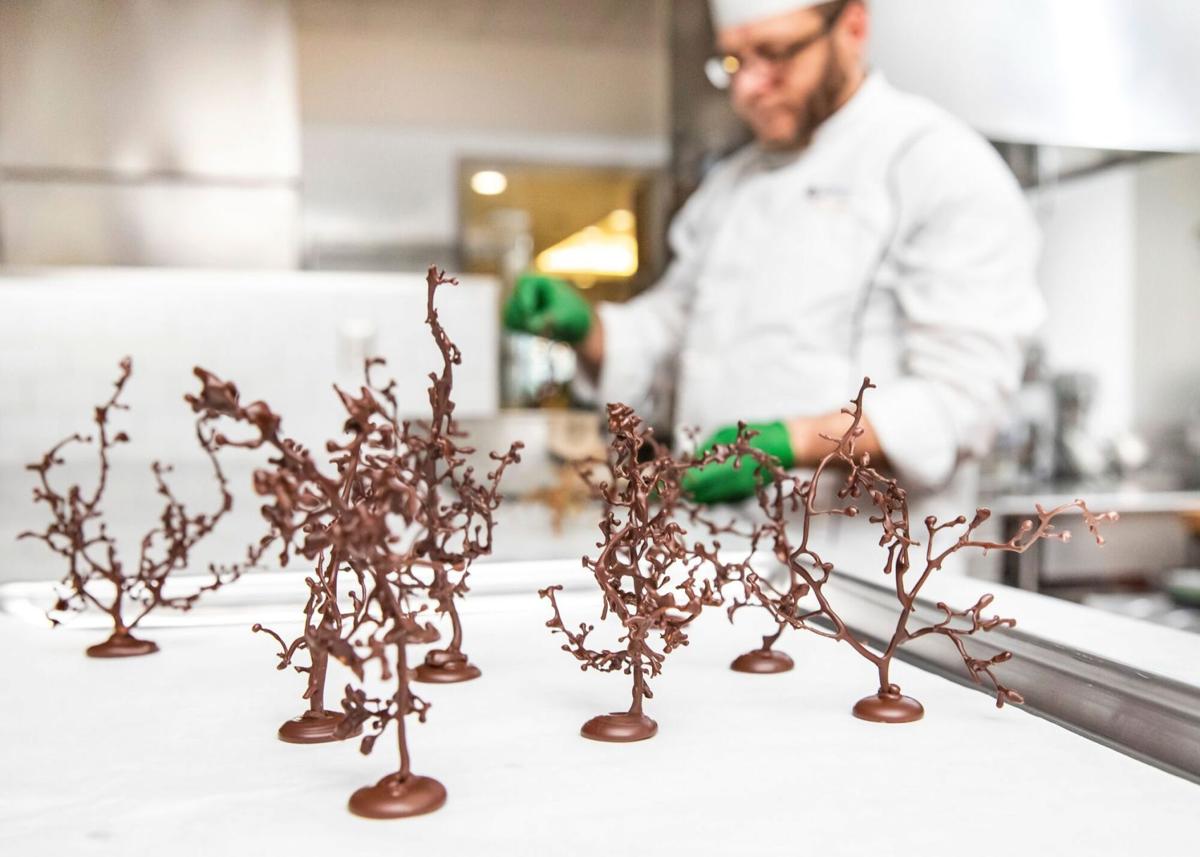 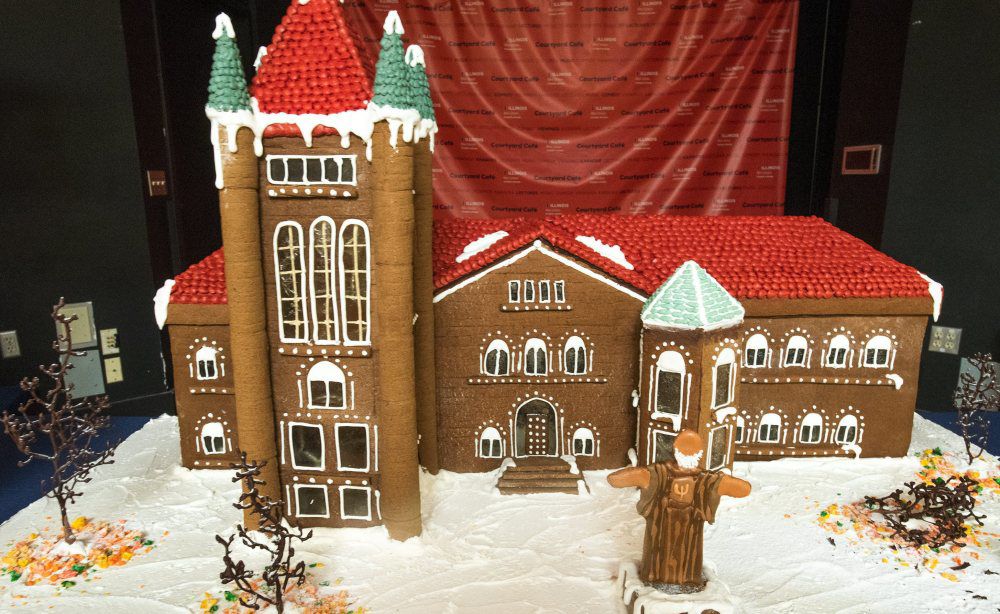 A gingerbread Altgeld Hall and Alma Mater created by UI pasty chef Eric Larson were on display Thursday, Dec. 19, 2019, at the Illini Union in Urbana.

A gingerbread Altgeld Hall and Alma Mater created by UI pasty chef Eric Larson were on display Thursday, Dec. 19, 2019, at the Illini Union in Urbana.

URBANA — On this Altgeld Hall, the tile roof is red icing, the windows are sucrose and the trees are chocolate-covered grape stems.

It only took, oh, about 64 hours to create — eight hours a day for eight days, by Larson’s estimation.

“It was daunting,” he said Thursday.

Larson whipped up creative projects before — including a chocolate motorcycle sculpture for a UI retiree who loved his bike and a 2-foot-tall cake version of Cincinnati’s baseball stadium for retiring UI Housing Director Jack Collins, a Reds fan.

So he agreed to give the gingerbread Altgeld a shot.

“It sounded like something that would be fun to do,” said Larson, who’s worked at the UI for 25 years. “Sometimes, a change of pace is kind of fun.”

It took a little longer than he expected.

Larson realized right away that he needed some kind of 3-D template, which he crafted out of cardboard. He used the pieces to create the gingerbread structure.

“They asked me for something that was a realistic-looking building. I knew I couldn’t get away with just putting candies all over it and hiding stuff,” he said.

He used tricks to mimic the features on the Romanesque revival building, which was completed in 1897.

The windows were constructed with melted “isomalt,” which looks like table sugar but is made of sucrose and is sturdier because it doesn’t absorb water, he said.

He dipped grape stems in chocolate for the trees, and used food-coloring to tint cornflakes tossed in marshmallow and butter to create leaves on the powdered-sugar snow.

Some features proved more challenging, including the curved pillars lining Altgeld’s signature tower, which took three or four tries. Larson baked them around dowel rods, but the dough kept stretching and stuck to the rods, he said.

“I don’t want to make anything ever again that’s got curves,” he said.

The biggest headache was Altgeld’s roof, which kept sloping too much and had to be reinforced with shims, he said.

The final touch was a gingerbread-cookie version of the Alma Mater sculpture out front, which was the star of the video spot. It shows Jones walking past the gingerbread Altgeld, then sneaking a bite of the Alma cookie and putting it back, minus one arm.

Larson made about 19 cookies for the many takes involved in the recording — some with arms “prebitten off” and fake teeth marks made with a fluted cookie cutter, he said. It looked more convincing than the real thing, he said.

“We tried biting a cookie and seeing how real it looked, but it broke a whole section off,” he said.

Jones wasn’t the only one sneaking a bite. The gingerbread Altgeld was on display at the Illini Union this week, and “somebody bit Alma’s head off,” said campus spokeswoman Robin Kaler, who oversaw production of the video greeting with Allison Vance.

On Thursday, the headless Alma had been replaced with a “Lovie Mater” cookie created by Larson — essentially Alma with a Lovie Smith beard.

The other Alma cookies were used up in the filming of the video — and they were delicious, according to Kaler, who had the enviable job of eating the discards from the various takes.

“The chancellor ate seven arms and I ate seven cookies,” she said.

Next year’s greeting will have a different theme, but Larson is open to making gingerbread versions of other iconic campus buildings, such as the Hallene Gateway or Illini Union — but not Foellinger Auditorium. While he was working on the Altgeld model, he’d study other buildings as he drove around campus and decided he would never build anything with a curved roof.

“That would take a lot more time and a lot more people to create,” Larson said.

You can watch the holiday video or get Larson’s gingerbread-house recipe on the UI website, illinois.edu.