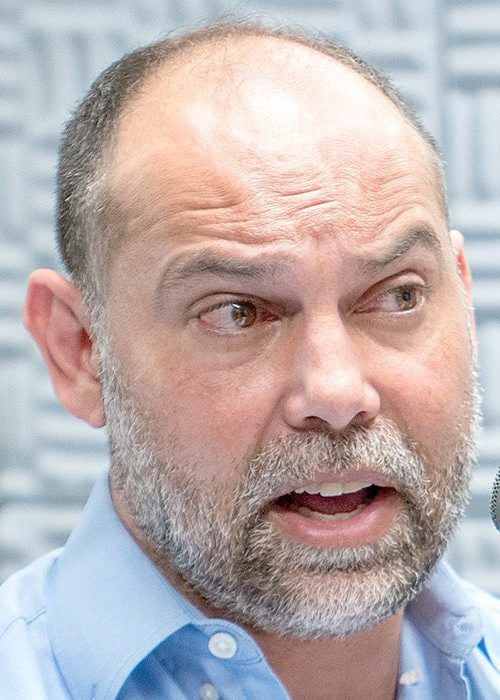 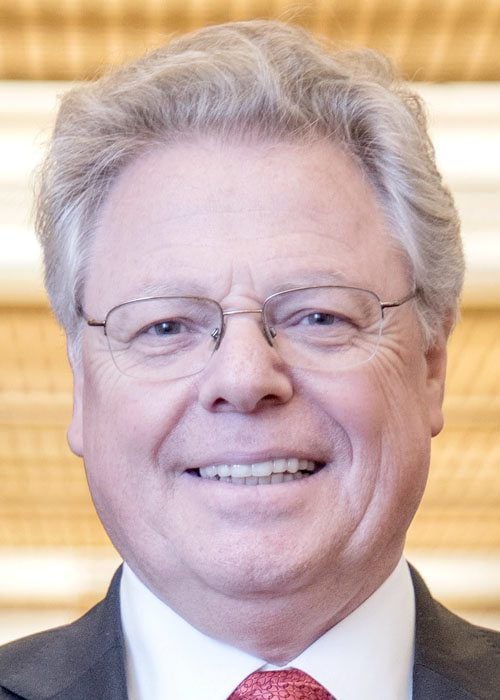 URBANA — After months of headlines about employee sexual misconduct at the University of Illinois, a high-level committee is recommending sweeping changes in policies and procedures for handling complaints and improving the campus climate.

They include a broader definition of what constitutes sexual harassment, a wider array of sanctions for faculty members, new confidentiality rules, interim steps the UI can take while an investigation is underway, and other tools designed to make it easier to respond to complaints.

The report also recommends expanding staff and resources to help those targeted by sexual harassment and removing barriers that discourage people from reporting it.

And it suggests the UI adopt a pilot project that would require applicants for tenured faculty jobs to waive their confidentiality rights over disciplinary records related to sexual misconduct, as the University of California-Davis has done, to reduce the risk of “passing the harasser” from one school to the next.

“At the end of the day, it takes all of us ... to come to terms with the fact that that’s our responsibility,” said Provost Andreas Cangellaris. 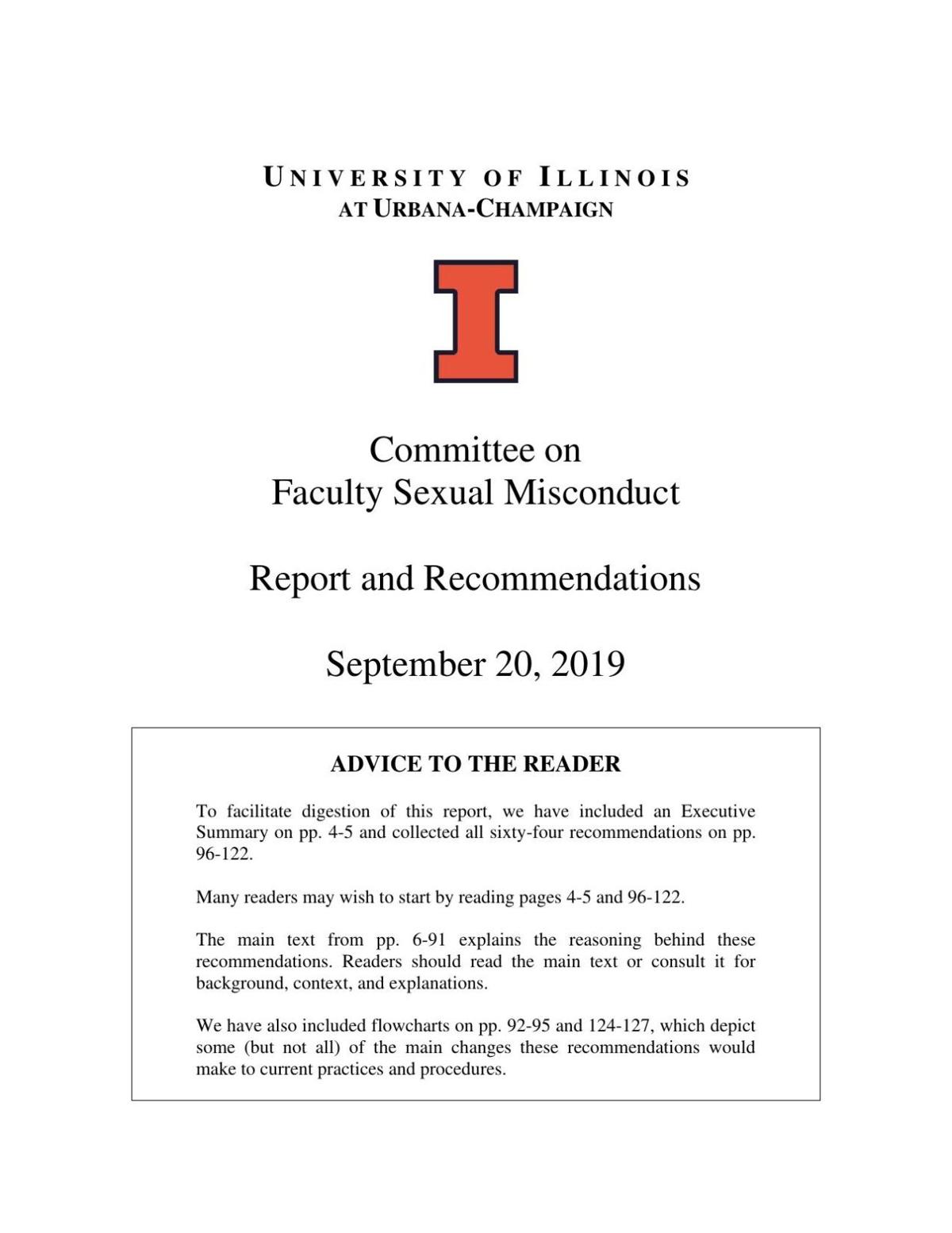 The 64 recommendations are outlined in a 127-page report from a committee that Cangellaris appointed last January, which was released Tuesday morning. Chairman Rob Kar and Cangellaris agreed to discuss the report in advance with News-Gazette Media.

The recommendations were all supported unanimously by the 14-member committee, said Kar, a law professor who took the lead on the issue for the Academic Senate last fall following complaints about the sexual-harassment investigation of law Professor Jay Kesan and others. The panel includes eight professors and six administrators.

The policy is designed to ensure sexual harassment “has no place on this campus,” Cangellaris said.

The provost said the campus will act quickly on recommendations that can be implemented right away and consult with the senate and other groups on those requiring more input. An implementation committee will be appointed to foster that process, he said.

“We are not waiting anymore,” Cangellaris said. “There’s a lot of eagerness and urgency to get going with changing the culture.”

The two most important changes — and probably the most difficult to reach consensus on — were drafting a new definition of sexual harassment that won’t infringe on free speech and developing sanctions for faculty that won’t run afoul of concerns about academic freedom, Kar said.

Both were designed to allow the UI to tackle the problem aggressively but also consistent with the law, he said.

The new policy would explicitly target broader examples of sexual harassment suggested by national experts, not just instances of “quid pro quo” harassment or behavior “severe or pervasive” enough to create a hostile environment, a term borrowed from legal definitions, the report said. In Kesan’s case and several others, investigators found that employees hadn’t strictly violated the current policy even though their behavior was objectionable.

'We want a system that is less focused on legal compliance and more focused on prohibiting sexual harassment in any form,' said law Professor Rob Kar, who leads the 12-member committee.

The proposed definition would include “any unwelcome sexual, sex-based or gender-based conduct occurring within or having an impact on the workplace or academic environment, regardless of how it is conducted (physically, verbally, in writing, or via an electronic medium) and regardless of the genders of the individuals involved.” Allowances would be made for controversial topics in classroom discussions.

The new procedures and sanctions would allow the UI to respond to sexual misconduct more quickly, the committee said, even while adding protections for due process and academic freedom.

Currently, UI statutes mention just two sanctions for faculty misconduct — dismissal or “severe sanctions short of dismissal,” essentially suspension with or without pay for up to half a year. Both require a lengthy hearing process and have rarely been used.

The report recommends a formal set of progressive sanctions starting with a letter of expectation or reprimand, then a loss of one week’s salary, a loss of one month’s salary, a one-year suspension without pay and, finally, dismissal.

Beyond that, misconduct could be considered when deciding on merit raises, awards, sabbaticals, honors or promotions.

The goal is to be able to correct misconduct where possible, the report said, but in severe cases, the university could begin immediate suspension or dismissal proceedings.

Other recommendations call for educating faculty about those expectations and ensuring the sanctions are applied in a uniform way across campus. A “sanctioning team” would advise the provost on those decisions, including the relevant dean and department head, representatives from human resources, legal counsel and the Office of Access and Equity, and a special senate or faculty representative.

Professors would have a right to appeal to a panel with faculty representation.

The report recommends changing the statutes to accommodate those progressive sanctions, which would require approval from all three campus senates as well as the board of trustees.

That has proven difficult in the past.

But the committee was structured to “bring all viewpoints that needed to be part of this conversation together,” Kar said, “and my sense is the board is very concerned and wants to play a role. There’s a lot of shared will by all parties to move forward.”

Disciplinary action by department heads would be reported promptly to the Office of Access and Equity so it could be entered into a database.

In cases where there is no formal investigation or finding of wrongdoing, but there’s credible evidence to support it, a written “cautionary notice” would be issued for an employee that could be taken into consideration if future allegations arise.

The Office of Access and Equity would track the number of cautionary notices by unit and identify departments where group counseling may be needed, the report said.

The committee is also urging more transparency about the process through regular reporting of different ways the UI responds to reports of sexual harassment.

The Office of Access and Equity would be required to issue public reports about the general classes of sexual-misconduct reports it receives and the sanctions, educational measures or other remedies taken.

New confidentiality rules are designed to encourage more victims to come forward. Information that could identify a complainant would only be shared with people involved in the investigation or response. But any finding of wrongdoing about an employee could be shared more broadly to prevent a recurrence of the misconduct and help monitor for threats of retaliation.

Both parties also would get regular updates about the status of an investigation, interim actions, sanctions and other outcomes.

The committee said the UI should avoid binding nondisclosure agreements, a recommendation that the UI has already adopted.

The report also said the UI should:

— Ensure the Office of Access and Equity has enough funding and staff to investigate reports quickly. With recent additions, the office now has four investigators, a senior investigator and an associate director. That should allow it to complete investigations within 60 days, as opposed to a year or more in the past, the report said.

— Hire more confidential advocates, who help victims find resources and decide whether to file complaints. The UI recently hired two for the Women’s Resource Center but more are needed across campus to help students who may be unaware of how to report a problem or reluctant to approach the Title IX office, the report said. The advocates could help assess reports, avoid false alarms and resolve cases that don’t require a full investigation, Cangellaris said.

— Communicate the proposed changes to the public. Many victims don’t report harassment because they don’t think what they experienced was severe enough or they think it will be futile, the report said.

— Form a task force to study voluntary mediation options for resolving complaints informally, as well as “restorative processes” to address harm, reconcile the two parties or promote changes in behavior. The Department of Education’s changes to Title IX regulations are expected to require universities to make those alternatives available, the report said.

The committee suggested a separate task force study how the proposed changes would affect processes for students accused of harassment.

Students have complained that they were left out of the process, and student government leaders demanded last week that they have input before any recommendations are adopted.

Chancellor Robert Jones said he was struck by the “depth and breadth of the report.

“They were able to find consensus on every recommendation. That’s huge,” Jones said, given the important role faculty play in campus governance.

In an email sent this week to teaching staff and students at the law school, Dean Vikram Amar informed them that as of Wednesday, Jay Kesan will be on a “university sanctioned leave” and will not teach.

Most agreed the comprehensive nature of their report, and its focus on changing the climate around sexual harassment, were more important than any one recommendation.