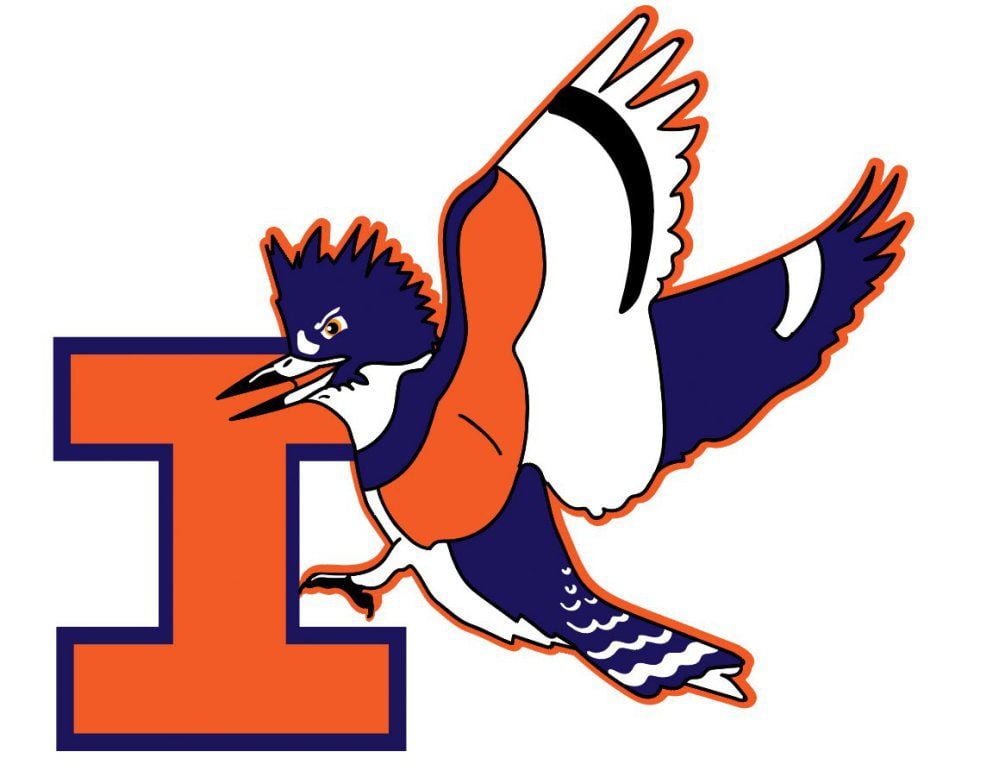 University of Illinois senior Spencer Hulsey's design for a new mascot: the appropriately orange-and-blue-colored belted kingfisher, which is native to Illinois. 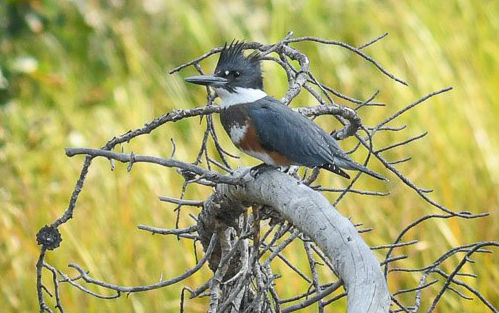 A female belted kingfisher is shown perched on a branch along the shore of Sprague Lake in Colorado's Rocky Mountain National Park.

URBANA — Alma Otter may have gone down in defeat, but mascot talk at the University of Illinois goes on.

The latest entry: the belted kingfisher, an appropriately colored bird native to Illinois and inspiration for UI senior Spencer Hulsey, who came up with the idea.

Hulsey presented her design to Illinois Student Government last week after getting major traction when she posted it online. The idea won positive reviews from that organization, which could put it up to an advisory vote in the spring, though that process is just beginning, President Connor Josellis said.

Hulsey, a senior majoring in physics, grew up on a farm near Kinmundy where kingfishers lived on a pond. Her grandmother always loved birds, so she did, too.

The female belted kingfisher, as it happens, is mostly blue, with an orange belt — sometimes a dark navy, sometimes a bluish gray, but definitely blue. The male is blue and white.

Hulsey started sketching out a design one day just for fun while learning Adobe Illustrator and thought, “This would be a good idea.”

“It’s not any other team’s mascot. It’s orange and blue. It lives here,” she said.

That was in early June, and she didn’t think much more about it over the summer. But when she later showed her physics friends, they “were excited about it,” she said.

So she posted it to Reddit, where it got a substantial number of "upvotes." Someone else shared it on a Facebook page called “UIUC Memes for Underfunded Teens,” where it drew 162 comments.

“It wasn’t really a campaign by me,” she said.

One commenter suggested she bring the idea to Illinois Student Government, which held an advisory vote last spring on the Alma Otter concept. That idea lost by only 300 votes out of more than 7,300 cast, a big turnout for a student election.

Hulsey was invited to present the kingfisher to members of the student government’s publicity committee, who liked it, and they took it to the full student government meeting on Oct. 16. Hulsey gave a brief talk about it and showed them her designs.

The reception was fairly enthusiastic there and online, Josellis said.

The Daily Illini also ran a feature on Hulsey and her kingfisher designs this week.

“It’s kind of reminiscent of the Alma Otter mascot, just because it was another one started as a UIUC meme page on Facebook or Reddit,” Josellis said. “When we do get a symbol or mascot, that’s probably how it will start.”

Not everyone liked it. Many simply said “Bring back the Chief.” At least one critic argued that collegiate teams with bird mascots typically don’t fare well.

“Is no mascot at all working for us?” Hulsey said.

Hulsey thinks it would be unique for Illinois to have a female mascot, “which I don’t think is used by any other college.”

The kingfisher can be both aggressive and cute, she said.

“What we don’t want is just a run-of-the-mill falcon or wolf or something common. I think we need something unique and something special. I think that’s what the kingfisher is,” she said.

Ultimately, Hulsey said she doesn’t have a “personal investment” in the kingfisher, but “I want a mascot that can go have fun, crazy antics on the field.”

She thinks the other ideas popularized to date “all have merit.”

“I think the Alma Otter is adorable. The Champ definitely fits the Fighting Illini really well,” she said. “I just think there’s something unique about the kingfisher.”

Josellis said the next step for student government would be to approve an advisory referendum question for the March student election ballot. It would be nonbinding, “more a straw poll than anything,” he said.

If it wins approval, student government leaders would likely approach administrators about the general idea, he said.

Jones said last week that a mascot is a possibility, but he and his team are still reviewing that recommendation and others from the Commission on Native American Imagery. He has expressed strong support for some kind of “new traditions.”

Josellis said Jones will need the backing of the student body if he decides to move forward with a mascot. He thinks students are ready, but the issue will require more discussion before a specific mascot is chosen, he said.

“Our mascot or new symbol has to be OK with the majority of the student body. We want to build our school spirit, and we want to make sure the entire student body can get behind (it),” he said.

“We haven’t had one in over 10 years. So what does that look like; how is it going to be utilized in new ways?” he said.

Josellis said some students who voted against Alma Otter were Chief supporters who don’t want any mascot. But some just didn’t like that particular concept.

“It seems like the majority of students are ready for something new,” Josellis said. “It’s just a matter of finding something we can all get behind, which is incredibly hard with a student body of 51,000 students. It’s going to take work.

“It does seem like it’s time for us to move on,” he said.

After the vote: No plans to choose mascot now, UI chancellor says

The student election commission released results Monday night, two days sooner than planned: 4,222 voted in favor of the Belted Kingfisher while 3,597 were against it.