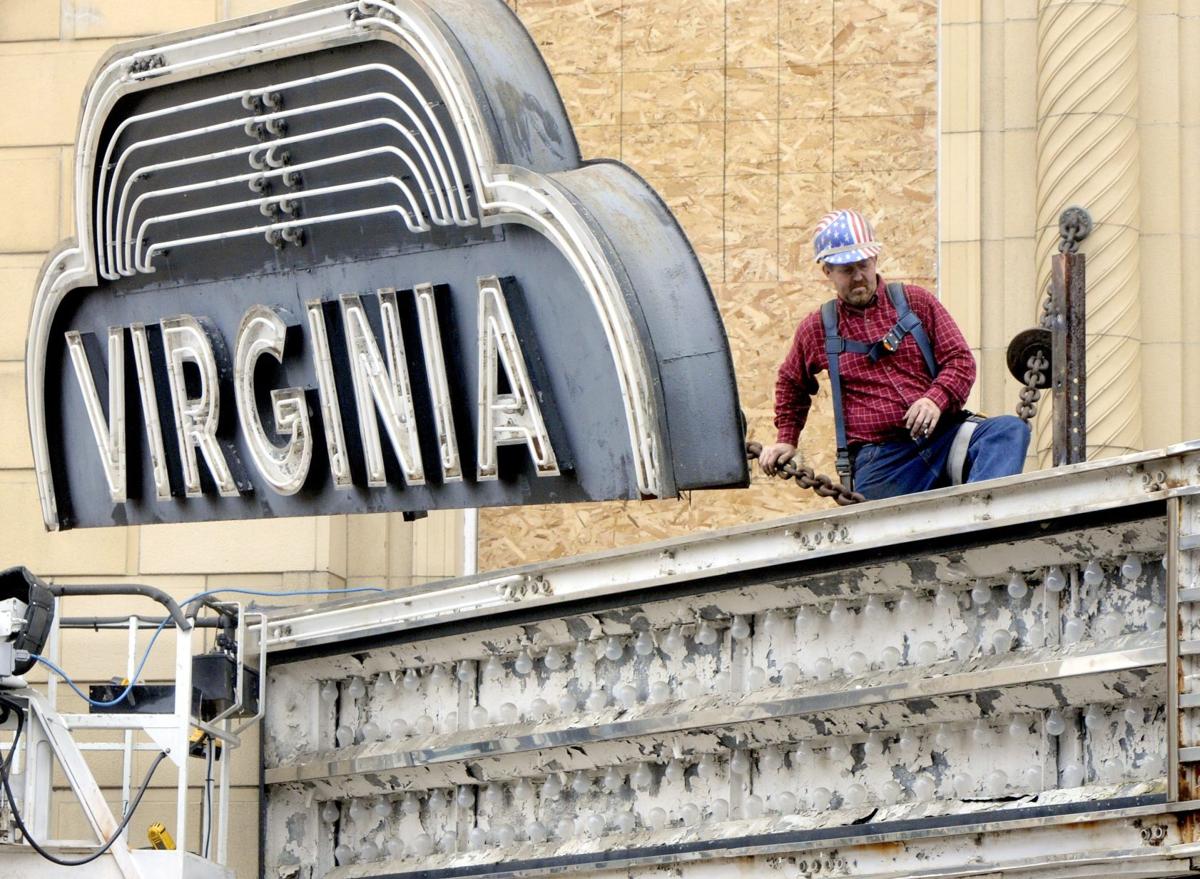 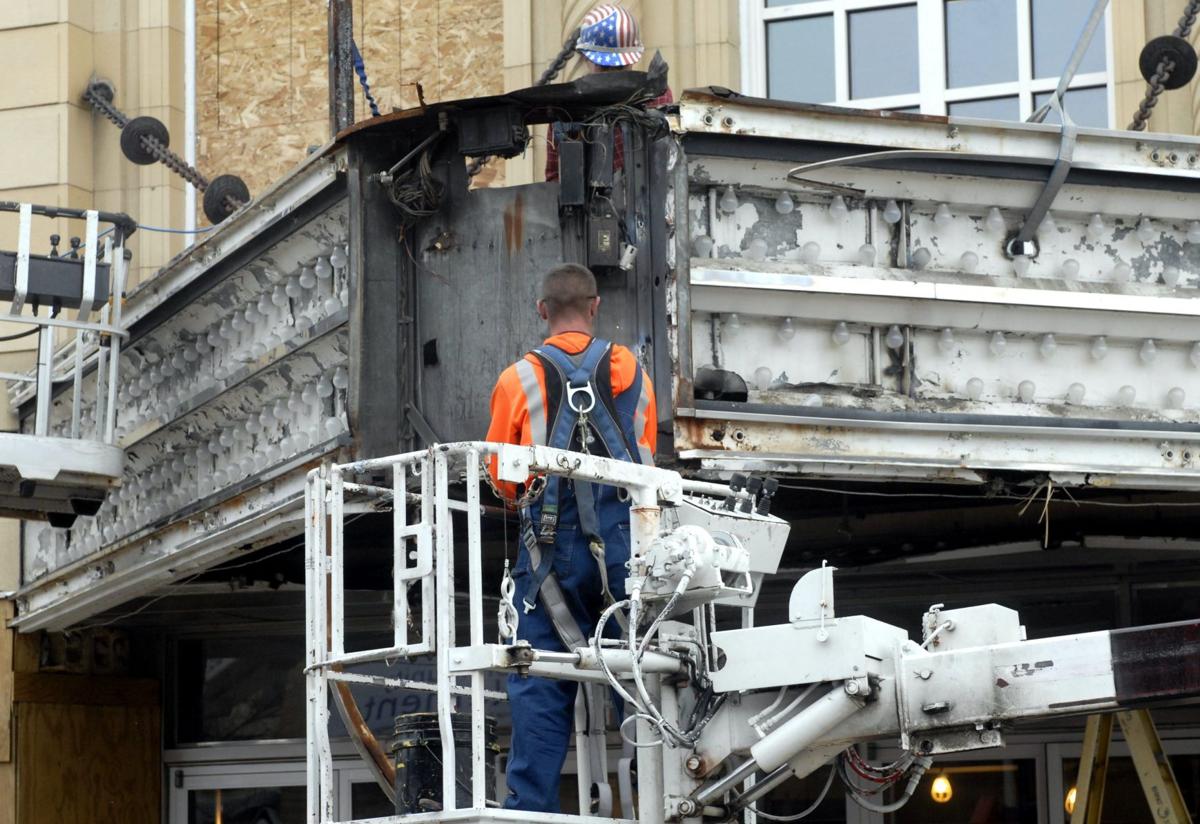 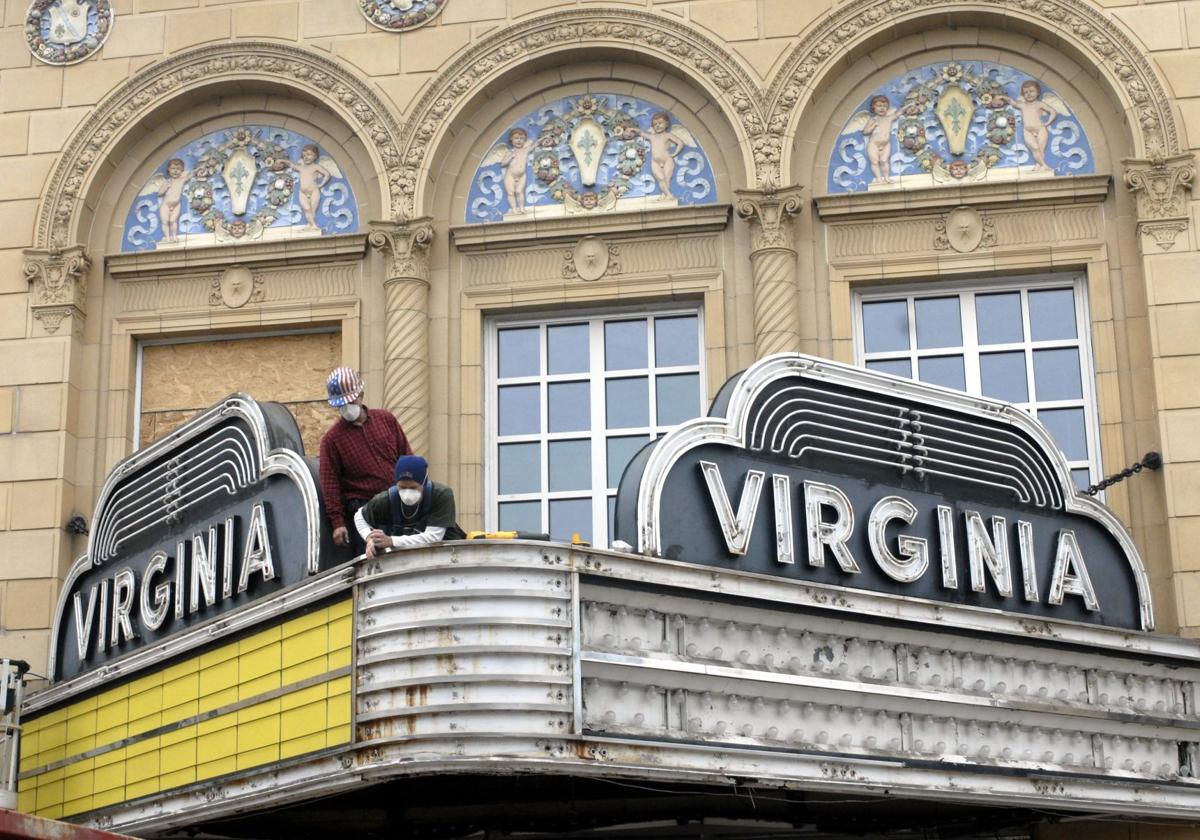 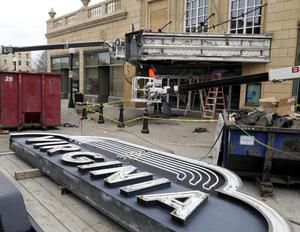 CHAMPAIGN – A city icon for decades, the neon marquee that hung prominently off the facade of the Virginia Theatre since the 1940s lay in crumpled pieces on Park Street on Tuesday.

Only a few rusted support beams protruded from the theater's north wall – usually the sight of lettered advertisements on a yellow background topped by the theater's name in bright blue and pink neon – as workers prepared the Virginia for its new marquee.

"Even if I had known it was happening today, I wouldn't have gone over there because it makes me very sad," said Carolyn Baxley, a historic preservation activist and the owner of the Cinema Gallery in Urbana.

Historic preservationists battled the Champaign Park District during the summer when the park board considered replacing the marquee. The board eventually voted to bring down the yellow neon sign, which has been plagued by electrical and structural problems and would have been costly to repair, and replace it with a replica of the marquee that hung over the sidewalk when the theater was built in 1921.

Now with the marquee taken down and torn to pieces, Baxley still does not agree with the park board's decision.

"I think that the marquee that was on it was far more historic than anything they'll recreate," Baxley said.

Laura Auteberry, marketing and development director for the park district, said the sign's state of disrepair became very evident as workers began to take it down.

"When they took the underside of the panels down, it rained rust and dust," she said.

Baxley said it is becoming increasingly rare to find a theater like the Virginia with neon signs. When the theater was originally built, neon had not even been introduced in the United States.

Historic preservationists argue that even though it is not original to the theater, the neon marquee was added during the Virginia's period of significance.

Park officials are saving the marquee's "bump-ups," the top portions that displayed the Virginia's name in blue and framed by pink neon lights, though Auteberry said the district still is not sure what they will do with them.

"We didn't want to get rid of them," Auteberry said.

The new marquee is still in design, she said, but park officials expect it to be a better complement to the theater's Italian Renaissance-style architecture and resemble the 1921 original marquee. When concepts are finalized, they will go before the park board for approval.

That schedule could get tight, with a target completion date of Dec. 20 and a reopening planned for New Year's Day.

"Are we 100 percent sure the marquee will be up by then? No," Auteberry said. "We may open without the marquee."

Otherwise, the project is on schedule, she said. The inside of the theater is a "total construction zone," as workers are doing electrical work, replastering, recarpeting, painting and renovating concessions areas.

Painters have selected a color palette based on some of the original paint they found as they scraped away old coats. They found shades of golds and teals in the honeycombs on the theater's ceilings.

"It will look more like it did in 1921," Auteberry said. "It will probably be a little lighter, we think a lot of it was really dark, but the tones are the same."

The park district has not finalized plans for a grand reopening yet, she said, but "certainly we'd like to have something."