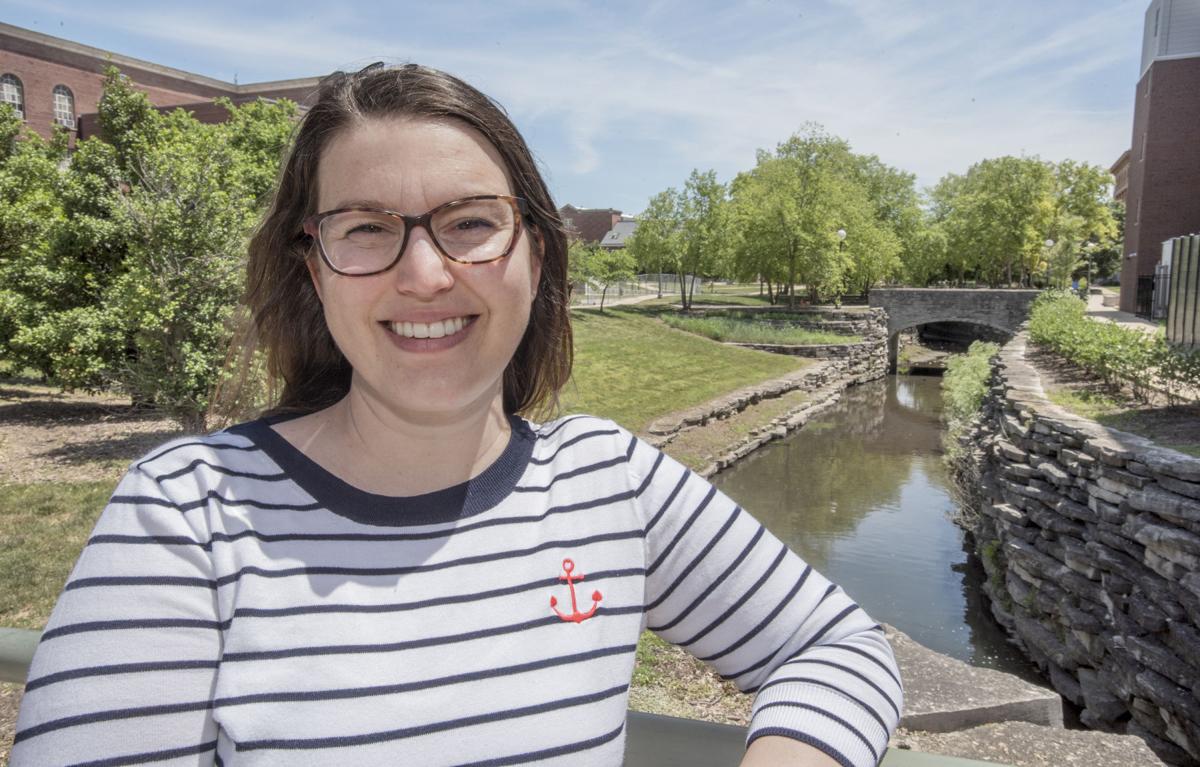 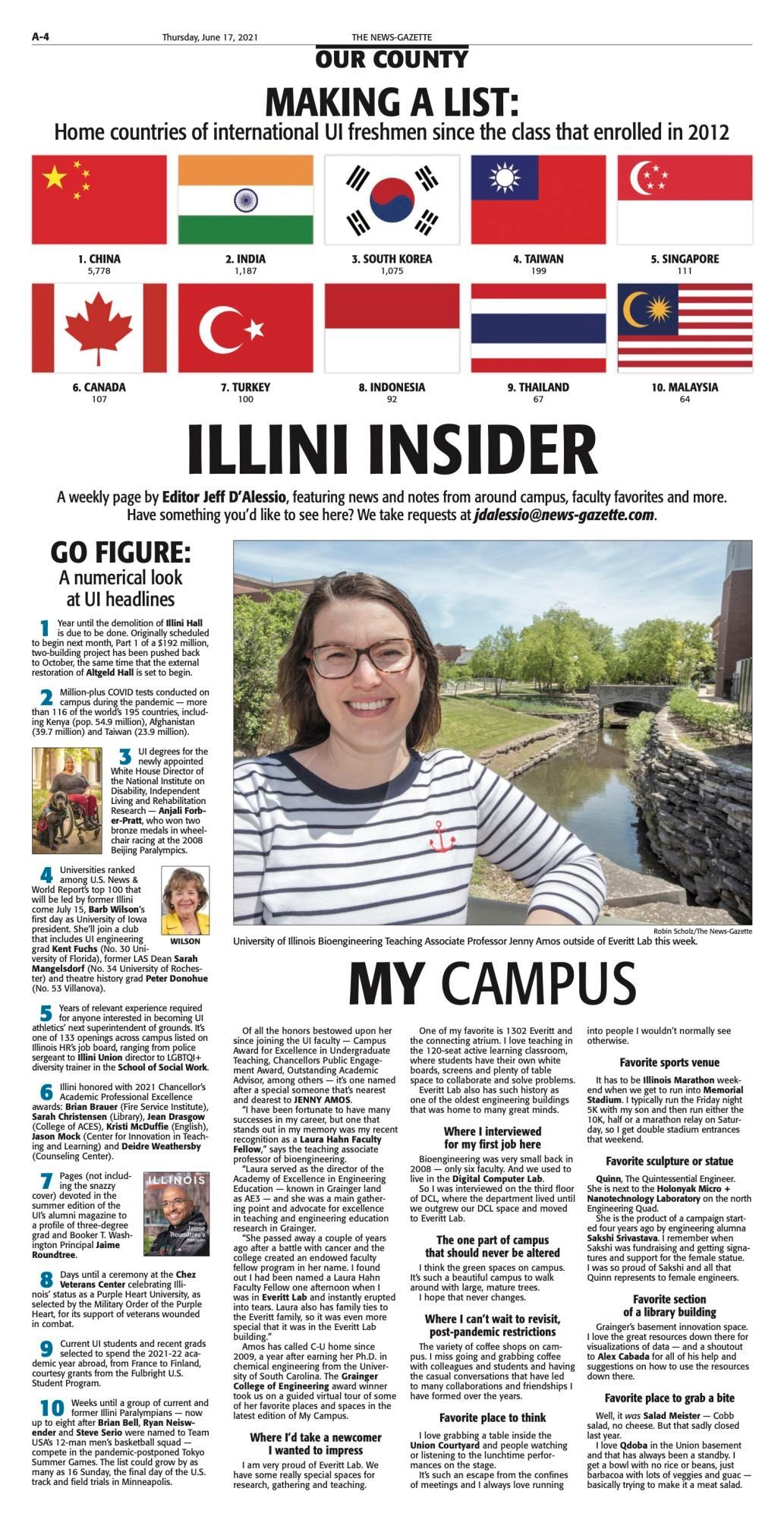 Of all the honors bestowed upon her since joining the UI faculty — Campus Award for Excellence in Undergraduate Teaching, Chancellors Public Engagement Award, Outstanding Academic Advisor, among others — it’s one named after a special someone that’s nearest and dearest to JENNY AMOS.

“I have been fortunate to have many successes in my career, but one that stands out in my memory was my recent recognition as a Laura Hahn Faculty Fellow,” says the teaching associate professor of bioengineering.

“Laura served as the director of the Academy of Excellence in Engineering Education — known in Grainger land as AE3 — and she was a main gathering point and advocate for excellence in teaching and engineering education research in Grainger.

“She passed away a couple of years ago after a battle with cancer and the college created an endowed faculty fellow program in her name. I found out I had been named a Laura Hahn Faculty Fellow one afternoon when I was in Everitt Lab and instantly erupted into tears. Laura also has family ties to the Everitt family, so it was even more special that it was in the Everitt Lab building.”

Amos has called C-U home since 2009, a year after earning her Ph.D. in chemical engineering from the University of South Carolina. The Grainger College of Engineering award winner took us on a guided virtual tour of some of her favorite places and spaces in the latest edition of My Campus.

Where I’d take a newcomer I wanted to impress

I am very proud of Everitt Lab. We have some really special spaces for research, gathering and teaching.

One of my favorite is 1302 Everitt and the connecting atrium. I love teaching in the 120-seat active learning classroom, where students have their own white boards, screens and plenty of table space to collaborate and solve problems.

Everitt Lab also has such history as one of the oldest engineering buildings that was home to many great minds.

Where I interviewed for my first job here

Bioengineering was very small back in 2008 — only six faculty. And we used to live in the Digital Computer Lab.

So I was interviewed on the third floor of DCL, where the department lived until we outgrew our DCL space and moved to Everitt Lab.

The one part of campus that should never be altered

I think the green spaces on campus. It’s such a beautiful campus to walk around with large, mature trees.

I hope that never changes.

Where I can’t wait to revisit, post-pandemic restrictions

The variety of coffee shops on campus. I miss going and grabbing coffee with colleagues and students and having the casual conversations that have led to many collaborations and friendships I have formed over the years.

I love grabbing a table inside the Union Courtyard and people watching or listening to the lunchtime performances on the stage.

It’s such an escape from the confines of meetings and I always love running into people I wouldn’t normally see otherwise.

It has to be Illinois Marathon weekend when we get to run into Memorial Stadium. I typically run the Friday night 5K with my son and then run either the 10K, half or a marathon relay on Saturday, so I get double stadium entrances that weekend.

Quinn, The Quintessential Engineer. She is next to the Holonyak Micro + Nanotechnology Laboratory on the north Engineering Quad.

She is the product of a campaign started four years ago by engineering alumna Sakshi Srivastava. I remember when Sakshi was fundraising and getting signatures and support for the female statue. I was so proud of Sakshi and all that Quinn represents to female engineers.

Favorite section of a library building

Favorite place to grab a bite

Well, it was Salad Meister — Cobb salad, no cheese. But that sadly closed last year.

I love Qdoba in the Union basement and that has always been a standby. I get a bowl with no rice or beans, just barbacoa with lots of veggies and guac — basically trying to make it a meat salad.

The Japan House director takes us on a tour of her favorite campus spaces and places, including the building where she saw her most memorable concert (MC Hammer) and cheered on the Illini big man whose nickname she borrowed (George "Big G" Montgomery).

The College of Media’s first Dean’s Fellow for Diversity takes us for a guided, virtual tour of some of his favorite places and spaces on and around campus, from the second floor of the main library to the Quad at 1 p.m. on a spring day (in non-pandemic times).

The Indialantic, Fla., native takes us on a guided, virtual tour of her favorite spots — from Intermezzo Café (for the Friday monster baked potato special) to South Farms ("a big research playground that always impresses my visitors").

Award-winning UI special education professor Meghan Burke tells us about her favorite stops on and around campus — from the Early Intervention Clearinghouse ("a hidden gem") to the Illini Union (a favorite of son Rogan's).

Honored recently with an Illinois Student Government Teaching Excellence Award, the Guyana-born professor takes us for a virtual tour of some of her favorite spots on a campus she hasn't been to since March 13, 2020.

The professor of cell and developmental biology and director of the UI’s Neuroscience Program takes us on a guided, virtual tour of her favorite spots — from The Quintessential Engineer sculpture to Krannert Center.

Among the Pakistan-born, Purdue-educated professor's favorite stops: Bardeen Quad, Japan House, KoFusion and Engineering Hall, where in 2019 he remembers hearing that the Grainger Foundation "wanted to make a transformational naming gift to our college."

This being National Library Week, we invited John Wilkin — the UI’s Dean of Libraries and University Librarian — to tell us about his favorite campus places and spaces as part of Thursday's Illini Insider page.

Ahead of a two-day virtual open house that kicks off Friday, Beckman Institute Director and two-degree UI grad Jeff Moore takes us for a guided tour of some of his favorite spaces and places on and around campus.

The London native's top spot? "It would have to be the Quad, early in the morning before breakfast, with a mist and chill in the air. Quintessentially Illinois."

"Foellinger Auditorium has always been and will always be my favorite educational space. ... Though when I was a student at the U of I, I may or may not have fallen asleep a few times in the balcony."

Taking us for a guided, virtual tour of her favorite UI places and spaces — two-degree alumna and senior instructor of statistics Karle Flanagan.

“It’s the best job I have ever had. The department is phenomenal and I love, love, love my students — they keep me young. I’m excited to be back in person with them this fall.”

"As a Floridian that just so happened to interview here in the month of February, I was enchanted by the snow. So, my host took my wife and I on a brief nighttime walk through the Quad during a light snow. The scene was quite remarkable for this Florida boy."