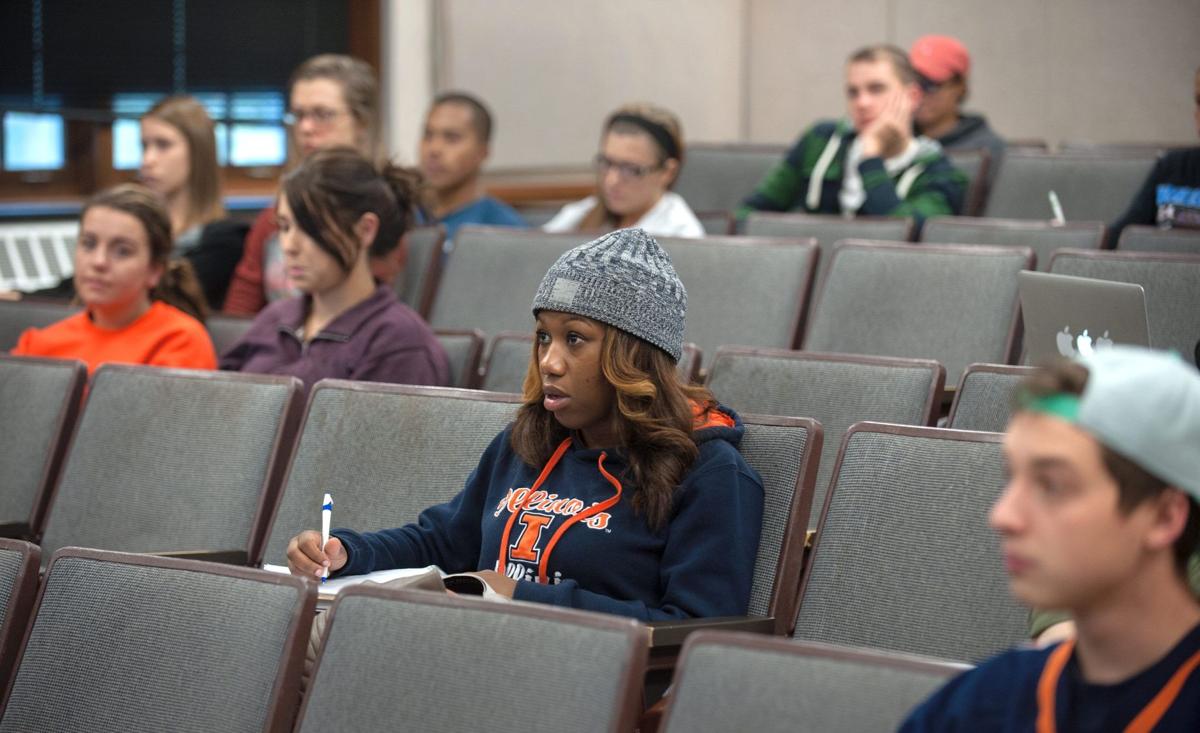 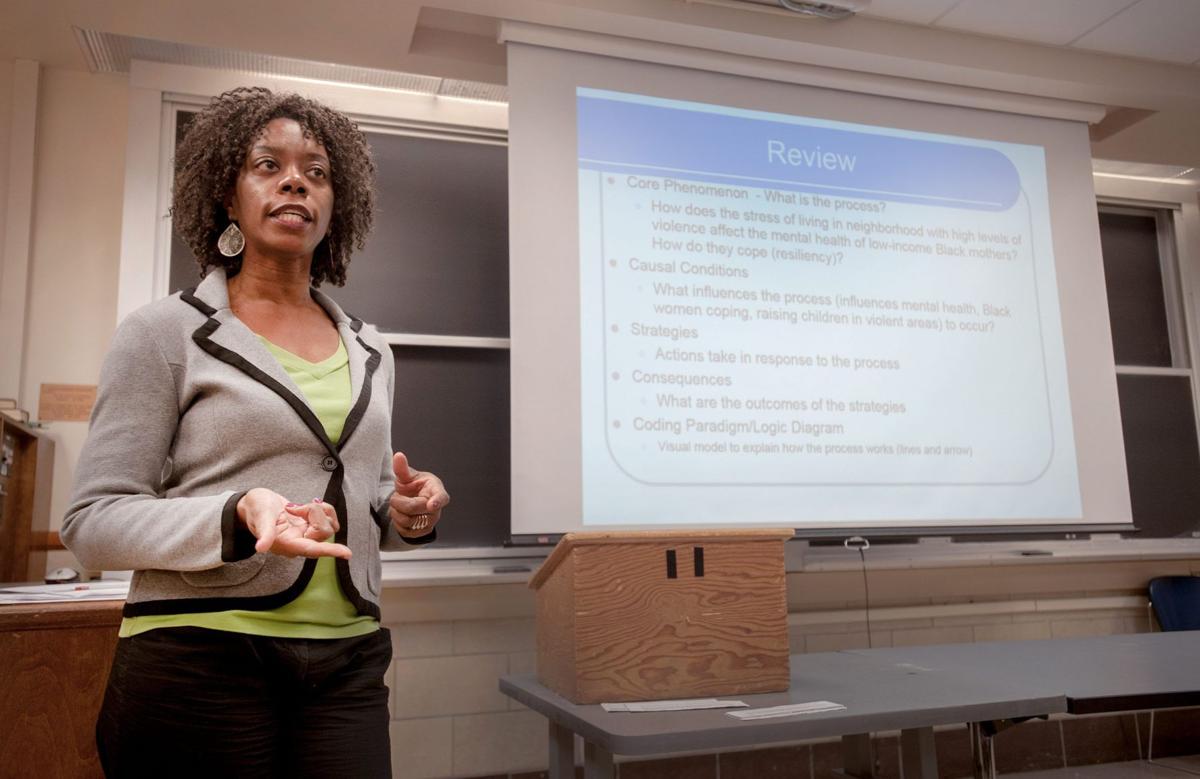 URBANA — In the fall of 1968, 565 students arrived on the University of Illinois campus as part of Project 500, an initiative to boost enrollment of African-Americans at the state's flagship university.

Nearly half a century later, the number of new African-American students joining the student body this semester — 356 — has fallen below that benchmark, prompting many to sound an alarm on campus and in the community. The last time there were 500 new African-Americans to arrive on campus was six years ago, and the number has been on the decline since then.

Meanwhile, as the erosion of the African-American student body has occurred, the University of Illinois campus as a whole has grown, setting enrollment records year after year.

"The University of Illinois has gotten really good at making statements about how it embraces diversity. A black student or black staff perspective would tell you that's not the case," said Nathaniel Banks of Champaign.

A UI graduate and member of Project 500, Banks worked for decades in diversity initiatives at the UI, including his time as director of the Bruce Nesbitt African American Cultural Center. The center marks 45 years on campus this weekend.

Today, as a percentage of the entire student body, African-Americans do not even hit the 5 percent mark. This fall, there are 2,126 African-American undergraduate, graduate and professional students, or 4.87 percent, down from 6.08 percent in 2008.

"We're the land-grant university. I think at least the university should represent the state of Illinois," she said.

Achieving that goal, that is to say, a Project 6,500, would require not only millions of dollars for financial aid but a major commitment from university leaders, said those who want to see the trend reversed.

"Project 500 is part of our history and it was a success," Mendenhall said. "It's needed again."

Around the Big Ten

How African-American undergraduate enrollment compares at conference schools, listed by percentage of the student body:

A look at the percentage of African-Americans in the student body and faculty at the University of Illinois:

Note: Figures include undergraduate, graduate and professional students and tenured and tenure-track faculty.

Time to get 'aggressive'

The reduction in African-American students is "unacceptable to everyone at the university who values diversity and our land-grant mission," campus spokeswoman Robin Kaler said. "The decline does mirror the decreased yield we are experiencing with all Illinois residents," she said, referring to the percentage of those admitted who go on to enroll.

Every fall, African-American students on campus kick off the year with an event called "Wake Up Call," where speakers share advice and inspirational messages with the students.

Ever since her freshmen year, UI senior Robyn Neal has noticed fewer students among the audience.

"Students are well aware there aren't as many African-Americans or minorities — period — on this university," said Neal, a graduate of Walter Payton College Prep in Chicago.

In the Big Ten, the UI comes out ahead of schools like Michigan, Wisconsin and Iowa, but behind several others based on fall 2013 numbers. Illinois trails Maryland with 12.5 percent, Rutgers at 7.7 percent, Indiana at 6.3 percent and Northwestern at 5.7 percent.

"We don't have specific targets for underrepresented students, but we're working hard to increase our outreach and recruiting efforts to African-American students," Kaler said.

UI admissions staff have gone back and looked at what they did last year and are in the midst of planning for this coming year. They plan to be much more "aggressive" not only in recruiting students from Chicago public schools but also more broadly across the state and in Champaign-Urbana, UI Chancellor Phyllis Wise told The News-Gazette.

Neal doesn't think fewer African-American students are applying — "I know a lot of people who apply and who don't get in," she said, including her younger brothers, which puzzles her. And those who do get in sometimes choose to go elsewhere because of the high price of admission.

"Financial aid plays a huge role" in influencing a student's decision to attend, including her own, Neal said.

Canary in the coal mine

As the university has become more selective and admissions standards have risen, some students coming out of high schools in the Chicago region (home to the state's largest population of African-Americans) and some areas of downstate Illinois are not receiving the kind of secondary education that enables them to qualify for admission to the Urbana campus, said James Montgomery, a member of the UI Board of Trustees.

Montgomery, a successful Chicago attorney and champion of equal rights, graduated from the UI in 1953 and received his law degree from the school in 1956, well before Project 500 was even conceived.

The UI, he maintains, is losing many academically qualified students to other universities because it does not have the financial resources to support scholarships that would enable such students to attend school here.

"If we want to try and get qualified African-American students who go to school in Illinois to attend the University of Illinois, we have to find a way to deal with the tuition problem," he said. "Until we do that ... we're not going to get them."

With the state's Monetary Award Program offering need-based financial aid to about half of those who qualify and apply — and the UI itself only able to offer aid to students with family incomes up to $85,000 (and that's any kind of aid, from a $1,000 scholarship to student loans) — it's no surprise to Banks that fewer of the state's African-American families are sending their children to the University of Illinois.

The fact is, there are not a lot of rich, black people who can pay tuition to come to the UI, Banks said.

"We are the canary in the coal mine. This is going to affect the entire state population. The only people who will be able to afford the U of I will be rich people. The U of I will longer in effect be a state institution. It will be more of a private institution," Banks said. "It's a prescription for disaster."

Faced with declining state appropriations, the university has adopted a revenue model that places great value on tuition money, especially tuition income from international students, said Terry Townsend, who was born and raised in Champaign, graduating from Central High School in 1968, then the UI.

"It's completely out of whack," he said.

Townsend has been following the decline of recent years and said now is the time for the university to take action. Leaders have not shown a commitment to tackle the problem, he said, leading Townsend to believe new leadership at the university is in order.

"They're preoccupied with bringing in international students at the expense of the historically disadvantaged or underrepresented. They're wasting away the gains we made" from Project 500, Townsend said.

"The university's priorities have to change," Montgomery said.

If the priority is to enhance minority participation, the university will have to move more of its funds into that area, he said. And make sure its fundraisers go out and ask for money for that specific purpose.

Wise: 'It's about inclusion'

Kaler said the school is prioritizing scholarships to ensure that Illinois remains affordable and accessible "to all of the highest-achieving students, regardless of their ability to pay," she said.

"I'm trying to raise money for scholarships," Wise said. "So many of the students that we offered admission to, roughly half of them, didn't come and they say it's because they've gotten an offer for a larger scholarship at another university.

"Money isn't everything, but we really need to do that."

The institution is underfunded by the state, and the university's endowments are minimal in relationship to other public universities (like the University of Michigan) and private ones (such as the University of Chicago), Montgomery said.

"We have to figure out ways to raise more scholarship funds," funds from wealthy donors and corporations that are unrestricted, Montgomery said.

Last month, the University of Chicago announced its "No Barriers" initiative to make the elite school more affordable to lower-income students. The new measures range from waiving application fees for students who also apply for financial aid to replacing loans with grants. It'll be paid for by a major fundraising campaign — $150 million to $200 million, according to the school.

Mendenhall called it a "fantastic idea."

She recognizes the UI is a state institute and its endowment pales in comparison to that of the University of Chicago. But that shouldn't stop the university from investigating what other schools are doing, to evaluate what sort of financial aid packages the University of Missouri is offering, she said. To annually review its strategies.

"We are looking to see what we need to do not only in admissions, but in terms of mentoring and advising once they get here," Wise said. "Because many are first in their family to go to college. Many trying to do this on a shoestring. For them to have to work is distracting them from being really able to concentrate on their studies.

"We absolutely need to reverse those numbers, but it's not all about numbers," Wise said. It's also about inclusion, she said, creating an atmosphere that is welcoming, having the students who are already here help as campus ambassadors, she said.

A less diverse campus does have an effect on the rich exchange that happens in a classroom, Mendenhall said. And when students see fewer people like themselves on campus, they might question whether they belong here, she said.

"The one positive thing of all this is this is 2014 rather than 1968 and students have a different attitude and outlook to the 'other,' so to speak," said Banks, who was a freshman at the UI in 1968. "Most of our students have been exposed to various other cultures. It's not like it's a culture shock when they run into someone else.

"But the other reasons for having a diverse campus is the contributions each one of those groups makes to the quality of life on campus. Fewer African-Americans means a loss of that perspective on the campus. What ends up happening is the campus reverts slowly back to way it was," he said.