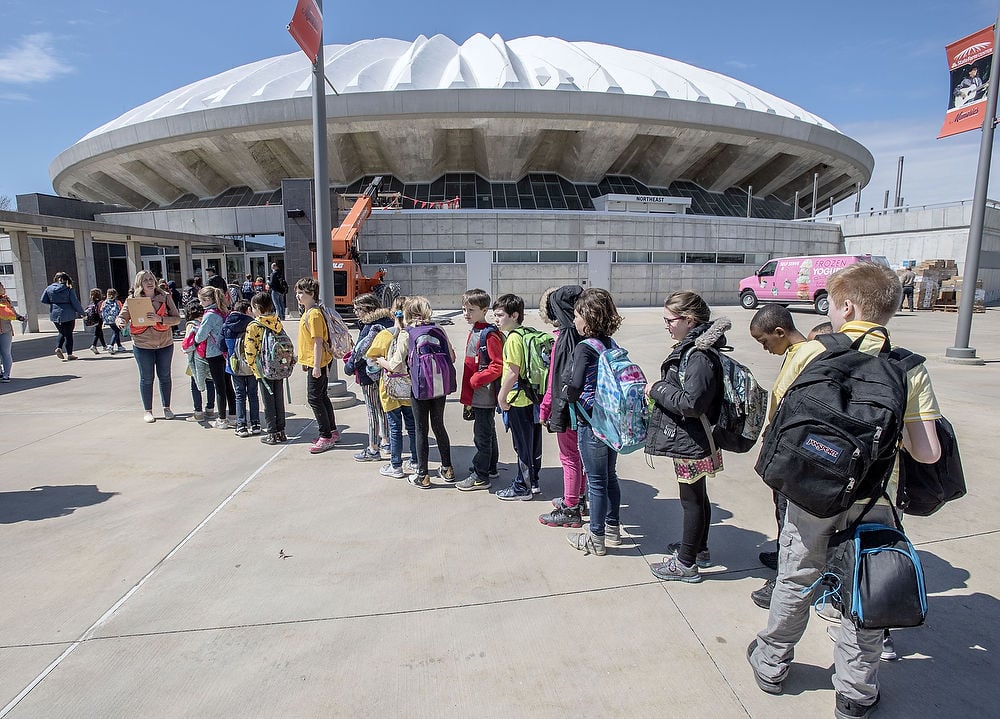 South Side Elementary School students line up during the Champaign school district's first 'reunification drill' on Tuesday, April 2, 2019, at State Farm Center, where they were taken by bus to be reunited with their parents after being evacuated from their school. 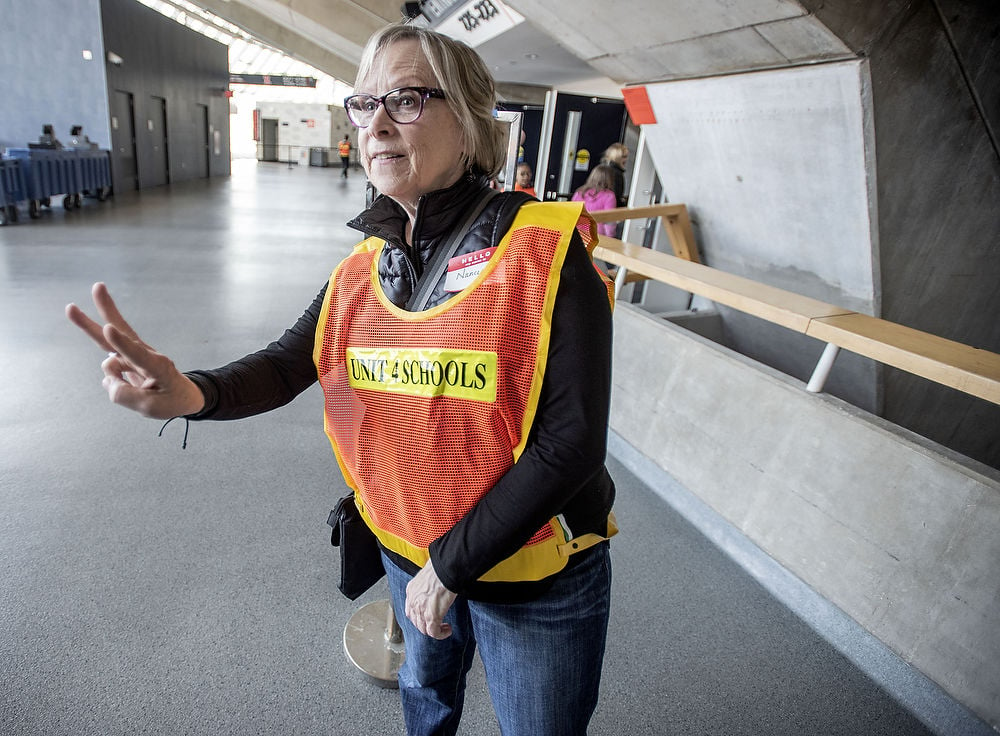 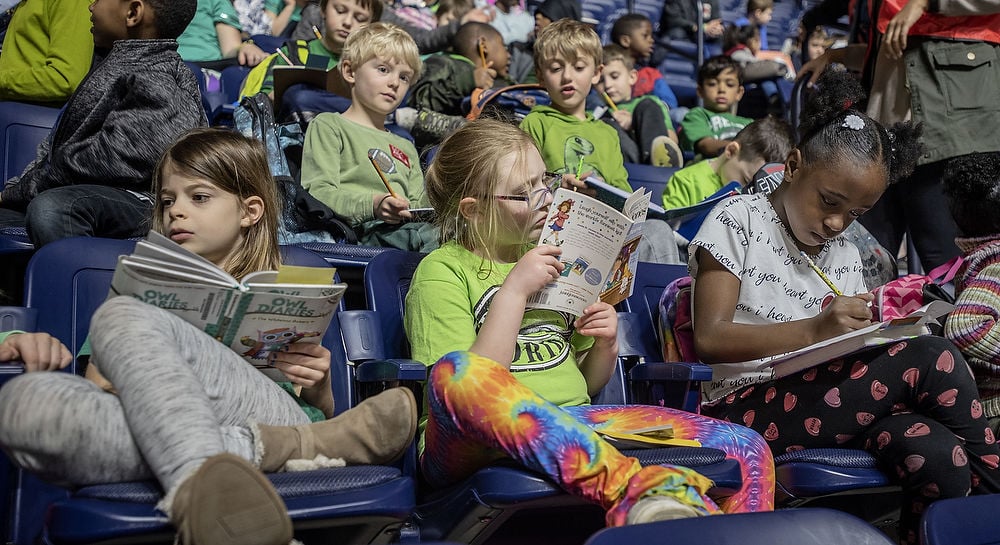 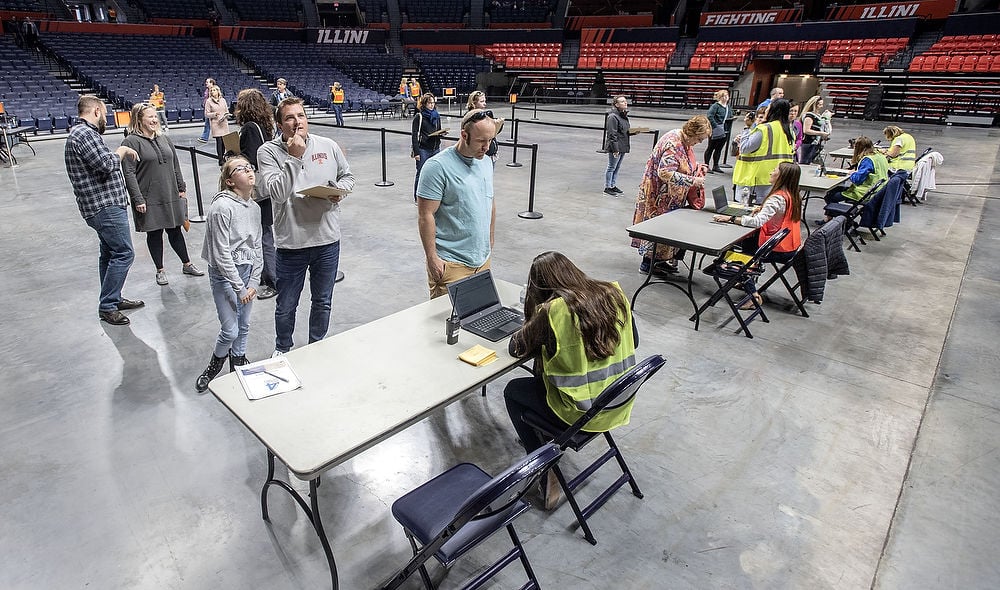 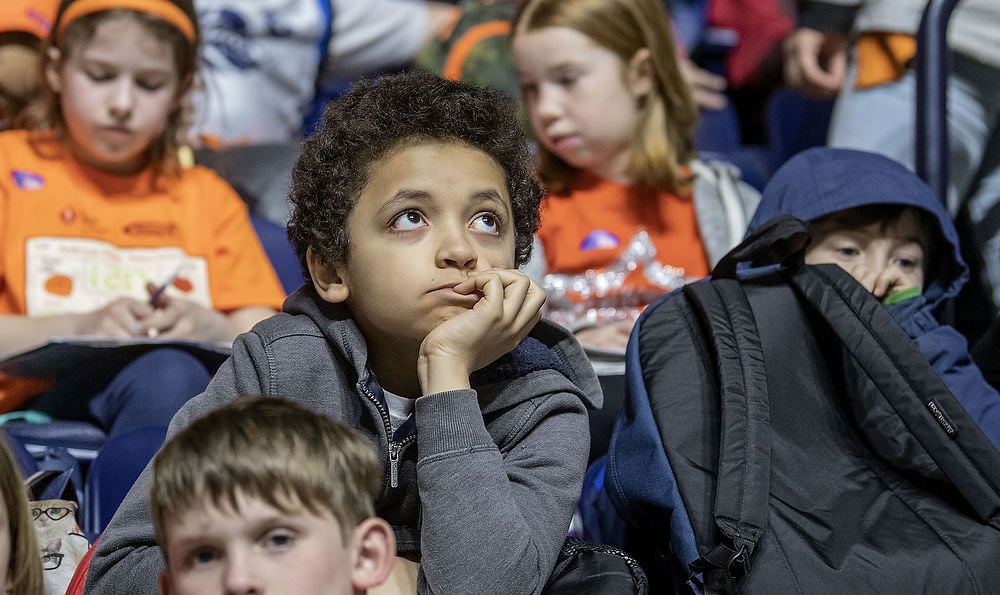 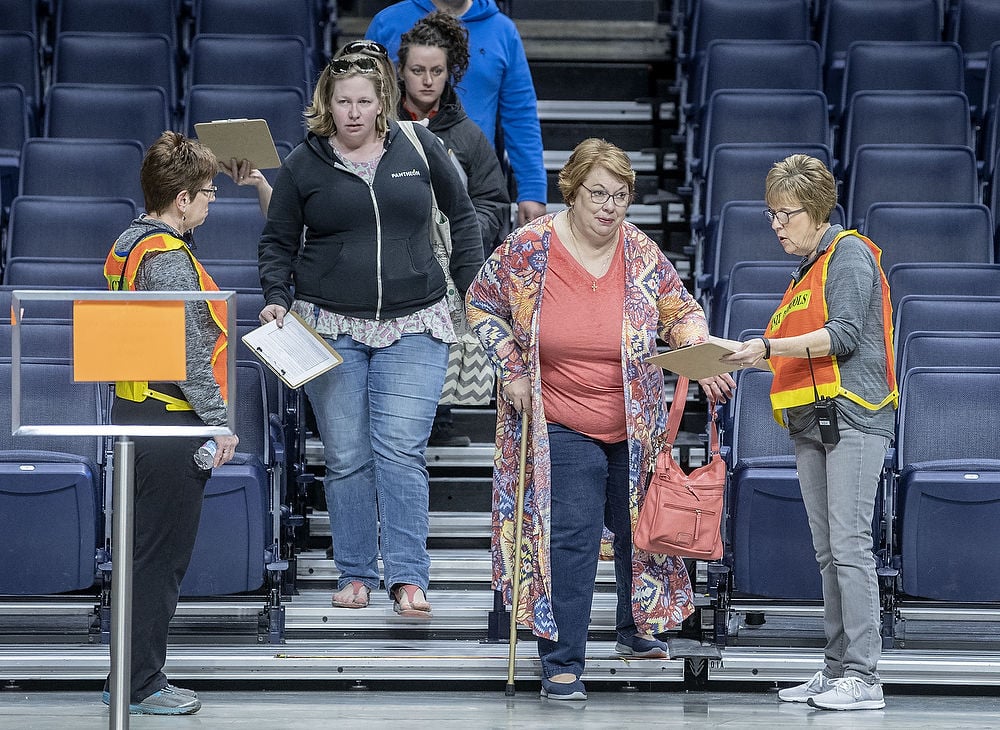 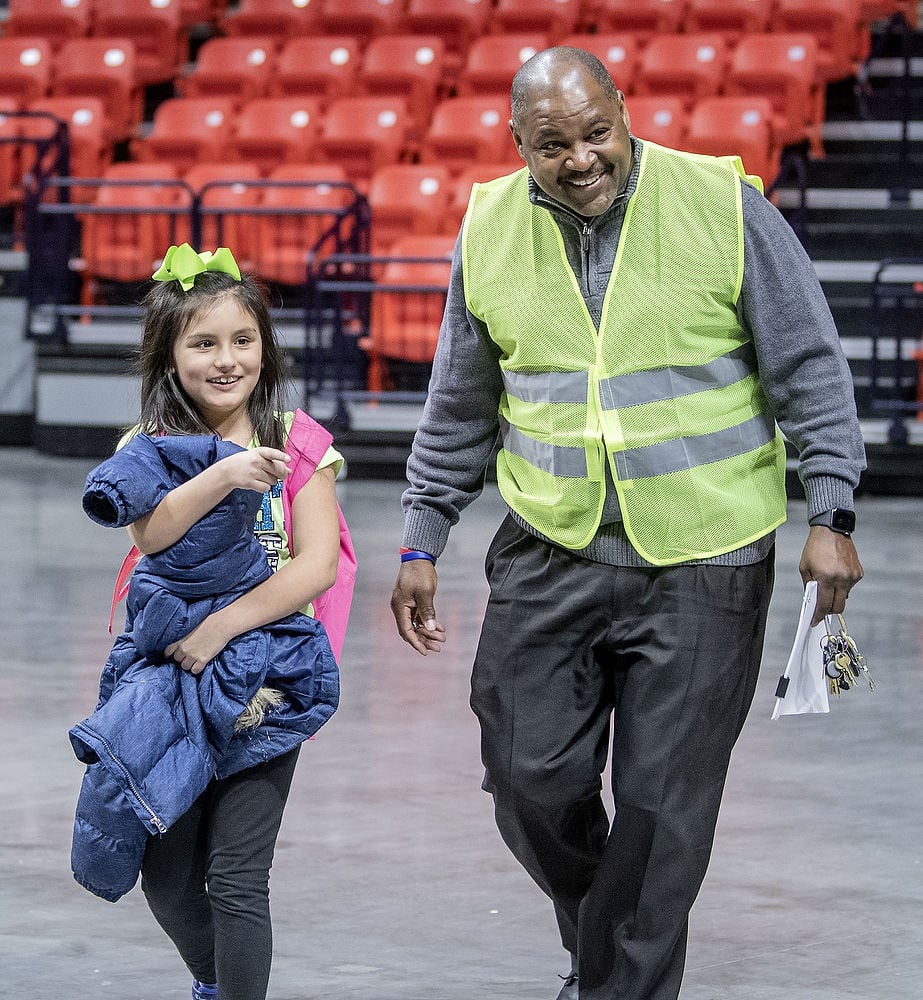 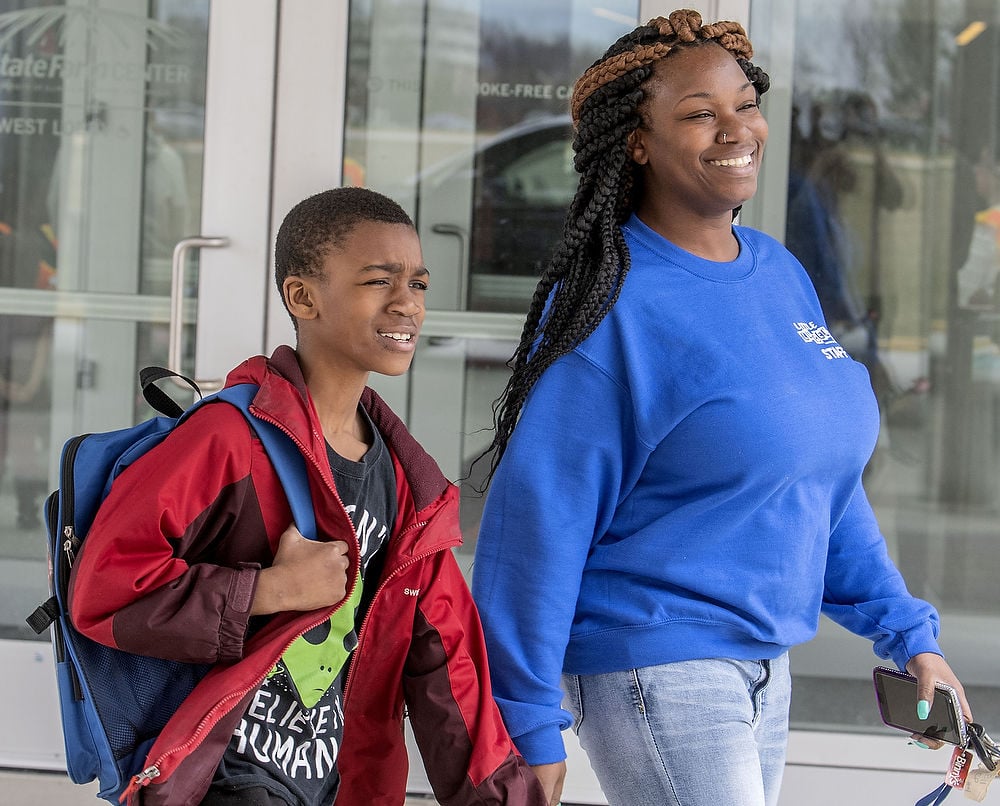 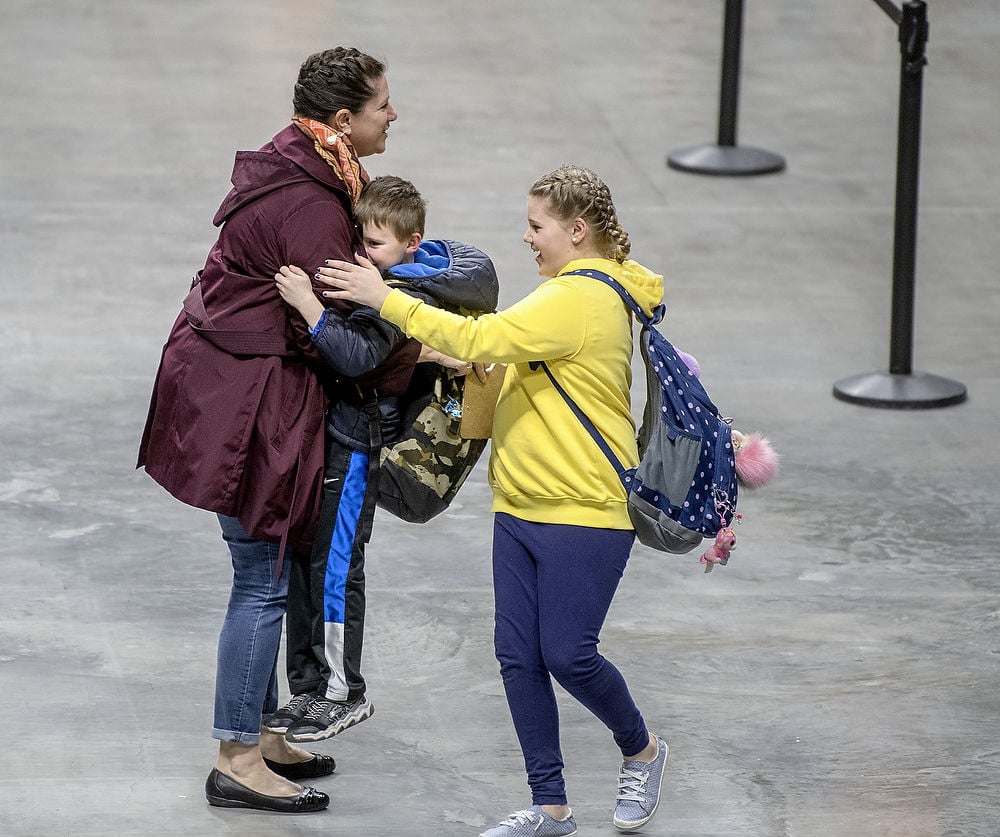 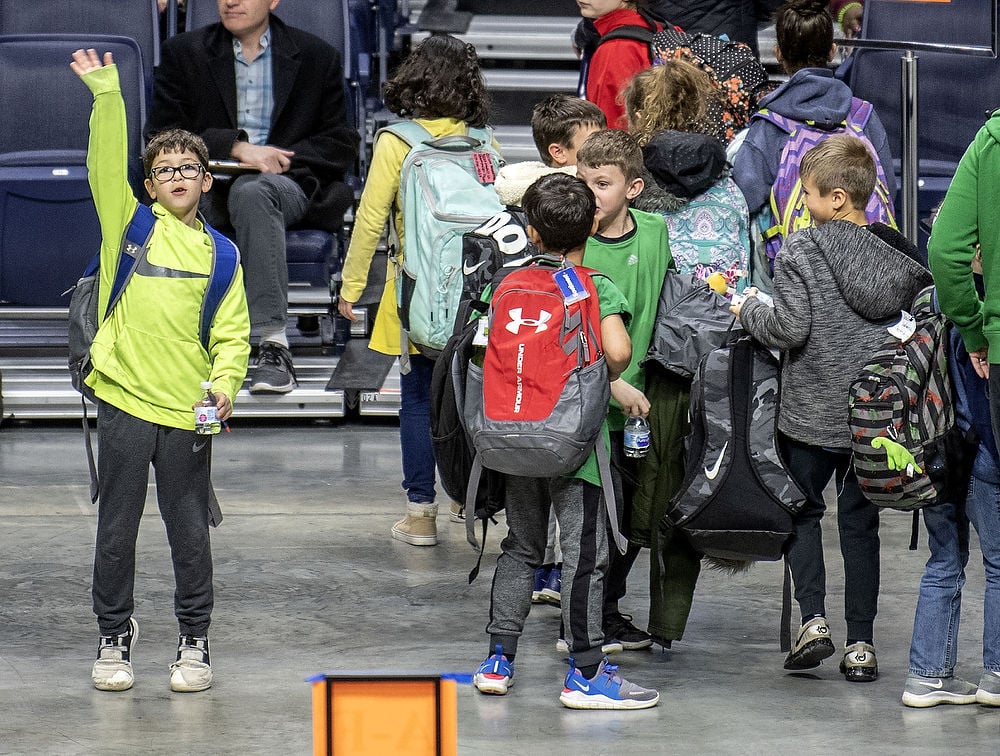 Reunification drills — like the one practiced recently by South Side Elementary students and families and scheduled to be repeated the next two years elsewhere in Unit 4 — are another way schools can prepare for the worst.

In a letter to families prior to last week's drill, South Side Principal Bill Taylor explained that emptying the elementary school, loading students onto buses and transporting them from the school to State Farm Center was part of Unit 4's effort to practice "how to handle an event, like a major storm, that could require temporary relocation of students from their home school to another safe location."

"If relocation of students to an off-site location did occur," Taylor went on to say, "we would need a reliable process in place to notify families and reunify families with students in an orderly and timely way."

So that's exactly what they did.

En masse, students left the South Side building around noon Tuesday and waited for buses near the Mellon Administrative Center.

After they'd been hauled to State Farm Center, the students waited inside with volunteers and staff, who also helped parents line up at tables, where they showed ID to pick up their children.

Were the situation real and not just a drill, Unit 4 spokesman John Lyday said it's likely that monitors at State Farm Center would be used to display names of students still present.

Late last year, Unit 4 administrators Orlando Thomas and Jennifer Ivory-Tatum gave a presentation to the board on behalf the district's Crisis Team, during which they laid out the benefits of such a drill.

Last week, Thomas was one of several neon-vested Unit 4 staffers overseeing the process.

"The biggest takeaway was the importance of truly taking time to plan and coordinating the roles and responsibilities of participants," said Thomas, the district's director of achievement and student services.

"The students, staff and parents of South Side were awesome. We'd met with teachers and parents to garner their thoughts prior to the drill, which was extremely beneficial. I could go on, but think you get the gravity of the project."

South Side's drill was meant to be a model for the district, so other administrators from Unit 4 campuses were also invited to watch.

Their notes, as well as those from the Champaign police and fire departments, will help the district's Crisis Team debrief later this month.

Thomas said that would include discussing "ways to improve the drill."

He said similar drills will be held for students at two other schools the next two years — a middle school in 2019-20 and a high school in 2020-21 — on dates to be determined.

The revised plan to implement the ALICE (Alert, Lockdown, Inform, Counter, Evacuate) drill includes adding a social worker and parents to the district’s crisis-planning processes and a commitment to only have one drill this school year, which will be announced in advance.