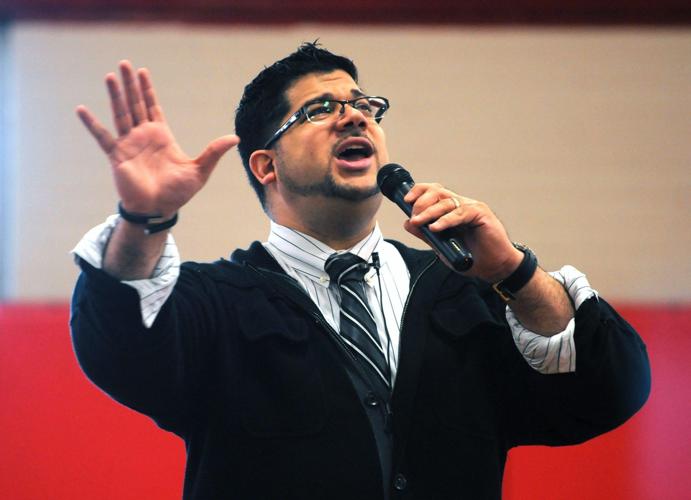 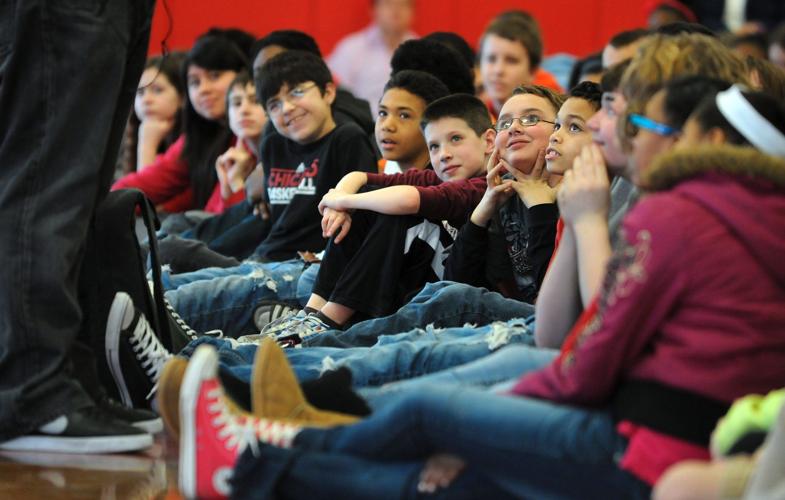 DANVILLE — It took Carlos Ojeda Jr. awhile to find his voice. But when he did, it changed his life.

Now he's using that voice to spread his message of education and empowerment to young people — and those who educate them — across the country.

"Your voice is your power. You know why?" he asked close to 800 students at North Ridge Middle School on Thursday morning.

"Because with that voice you can ask questions. Questions give you answers. Answers give you knowledge. And knowledge gives you the power to go," continued Ojeda, who repeated the maxim throughout his one-hour presentation.

Using humor and a rapid-fire delivery, Ojeda — now 37 and living with his wife and two sons in Pennsylvania — recalled growing up with his parents, Puerto Rican immigrants, and younger sisters in a rough neighborhood in Newark, N.J. When he was 10, he witnessed a drug deal and one of the men getting shot in the head.

That prompted his parents to move the family "from everything I knew and loved," to Reading, Pa.

"They thought by taking me away from trouble, trouble would not find me," Ojeda said with a wink.

But by the time he was in 10th grade, Ojeda was getting detentions and suspensions and ditching class to hang out in the boys' restroom with friends.

"A teacher told me I was garbage, that I would never amount to anything," he recalled. "I was told there was never going to be a moment when I would hold a diploma in my hand. And you know what? I believed it."

Then his senior year, Ojeda saw a beautiful woman walk by and followed her into an office. The woman, who turned out to be a guidance counselor, asked him if he was going to go to college.

"I responded, 'What are you smoking? Do you know who I am? I'm not the type who goes to school,'" said Ojeda, who believed what his teacher had said and went back to the restroom.

But the guidance counselor persisted. She eventually got Ojeda to go with her to Bloomsburg University, where she had gone to school, and tour the campus. When she asked Ojeda if he would like to go to college there, he said yes. Then she told him he would have to take the SAT.

"I didn't hear S-A-T,'" said Ojeda, who paused to take out his hearing aids and reveal to students he had a hearing impairment, which he wasn't diagnosed with until he was 23. "All I heard was 'essay.' I said, 'I'm not writing no essay!' I wasn't supposed to be at that school. I wasn't supposed to be taking that tour. I was garbage."

But then, Ojeda did something he had never done before. He asked a question. A bunch of them.

"What the heck are the SATs? Where do I take them? How much does it cost? Am I going to do good? She gave me all of the answers. And the answers gave me knowledge. And the knowledge gave me the power to go."

Ojeda took the exam and scored 1100 out of 1600, enough not only to get into college, but the college of his choice — Bloomburg.

He majored in business management and minored in marketing and law, became involved in many campus organizations and graduated with honors. He later earned a master's in business administration and started a number of businesses. He also has served as assistant director of admissions, Latino school and community liaison for Kutztown University of Pennsylvania and went on to become the youngest, first and only Latino business professor at the school's College of Business.

In closing, Ojeda shared that he and his wife, a doctor, learned that one of their sons also has a hearing impairment. Doctors told them the boy will have problems reading, writing and talking and other problems.

But Ojeda told students that when people meet his son, they discover "a 3-year-old who already knows how to read and write and knows his numbers and how to use an iPhone and the lyrics to every single Michael Jackson song. He believes he can be whatever he wants to be because nobody has told him he can't.

"Our voices are what?" Ojeda asked students.

For more information about Ojeda, go to http://www.coolspeakers.net. Students also can go to http://www.yochuchu.com to download his new book and a resource kit on preparing for college for free.